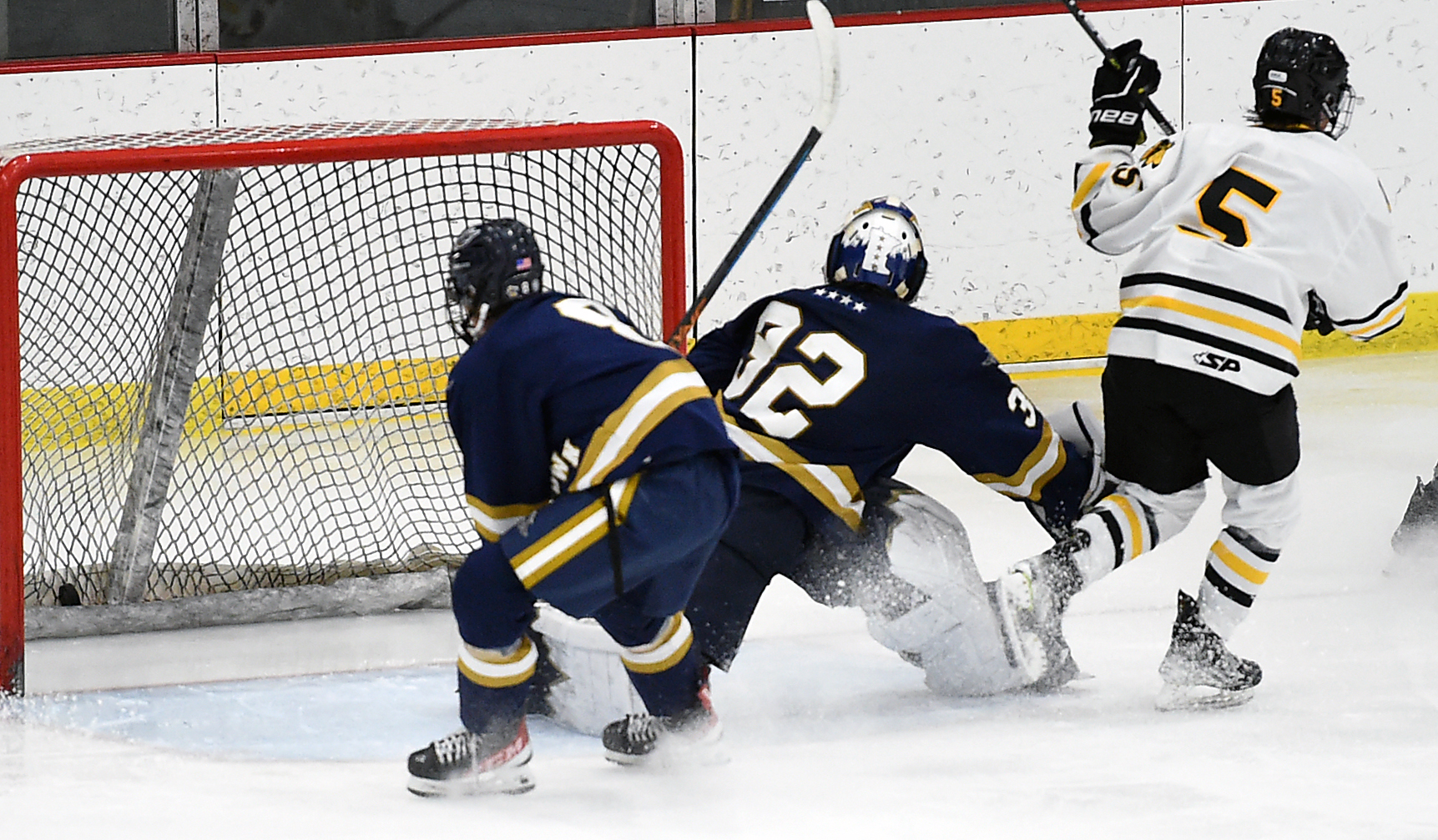 Warroad's Garrett Hennum, right, beats Hermantown goaltender Dane Callaway for a third-period goal that helped lift the Warriors past the Hawks 3-1 on Saturday at The Gardens Arena in Warroad. Photo by Loren Nelson, LegacyHockeyPhotography.com

It’s one thing for a city to casually call itself Hockeytown, as about a dozen do across North America. It’s altogether another to paint giant hockey sticks on its water tower.

Now that’s a commitment to the bit.

And it doesn’t stop there. Every goal scored by Warroad in The Gardens Arena is announced as a “Hockeytown USA goal!” Hockeytown signs are here, there, everywhere — as common around Warroad as feral cats in Key West.

So where better to stage one of the most anticipated Class 1A regular season games in state history than the original Hockeytown USA, home of legends such as Henry Boucha, T.J. Oshie and the Christian brothers, Roger and Billy.

Defending state Class 1A champion Hermantown rolled into Hockeytown on Saturday toting a 10-year, 103-game regular season unbeaten streak against small-school competition. The Hawks departed with a busted streak and dented aura as the Warriors used two third-period goals to earn a 3-1 victory in a matchup of the state’s lone unbeaten teams.

It’s been a historic couple of weeks for Shaugabay and the Warriors. On Jan. 7 he passed Oshie, currently playing for the Washington Capitals, to become Warroad’s all-time career scoring leader. On Tuesday he scored five points in Warroad’s 7-4 triumph over arch rival Roseau at a packed The Gardens Arena. Shaugabay’s goal late in the third period Saturday came in front of another huge crowd (about 1,800), completed the scoring and boosted his career total to 254 points, 18th on the state’s all-time career scoring list.

The key moment Saturday came courtesy of senior Garrett Hennum, a senior second-liner who entered the game with three goals on the season. A hustling Hennum helped break the puck out of the Warriors’ end, and then reached the front of the Hermantown goal in time to deflect a shot past Hawks' goaltender Dane Callaway.

Hennum hit the mark again when surveying the new Class 1A landscape after the Warriors’ victory.

Hermantown, winner of four state Class 1A championships and has been runner-up eight times, has long been the standard bearer for small-school hockey. To beat the Hawks isn’t so much to win a game as it is to earn a lifetime achievement award.

“You look at what they’ve done, there’s a reason they haven’t lost to a Class A team in 10 years,” Warroad coach Jay Hardwick said. “They have become kind of the measuring stick, and the last couple of years we’ve been really close with them. If you want to show you can play in Class A, you’ve got to beat Hermantown.”

Warroad lost 2-1 in overtime to the Hawks a year ago in the regular season, then lost again to Hermantown 3-2 in the state Class 1A championship game in March. Warroad players had been relishing Saturday’s meeting for months.

“After what happened last year, we’ve had this one circled ever since we knew we were playing them,” Shaugabay said.

Hermantown coach Pat Andrews said playing at Warroad undoubtedly gave the Warriors an advantage. Just as the Hawks had the edge during last season’s game in Hermantown.

Senior forward Garrett Hennum’s goal early in the third period held up as the winner as Warroad beat Hermantown 3-1 on Saturday at The Gardens Arena in Warroad, snapping Hermantown’s 10-year, 103-game regular season unbeaten streak against Class 1A competition.

Jayson Shaugabay added a power-play goal with 2:51 remaining as the Warriors avenged two losses to the Hawks last season, including a 3-2 setback in the state Class 1A championship game.

The loss was the first of the season for No. 1-1A Hermantown (10-1-1), which opened the scoring on Wyatt Carlson’s power-play goal 2:16 into the first period.

Hermantown outshot Warroad 10-5 in the final period and pulled goaltender Dane Callaway with 2:03 remaining, but the Hawks were unable to mount a comeback.

Hampton Slukynsky made 28 saves for the Warriors; Callway finished with 19.

Carson Pilgrim and Erick Comstock each had two assists for Warroad.

Hennum’s goal, a deflection from just outside the crease, was his fourth of the season. Shaugabay and Pilgrim share Warroad’s team scoring lead with 46 points each. Shaugabay has 254 points in his career, putting him alone at 18th on the state’s all-time career scoring list. 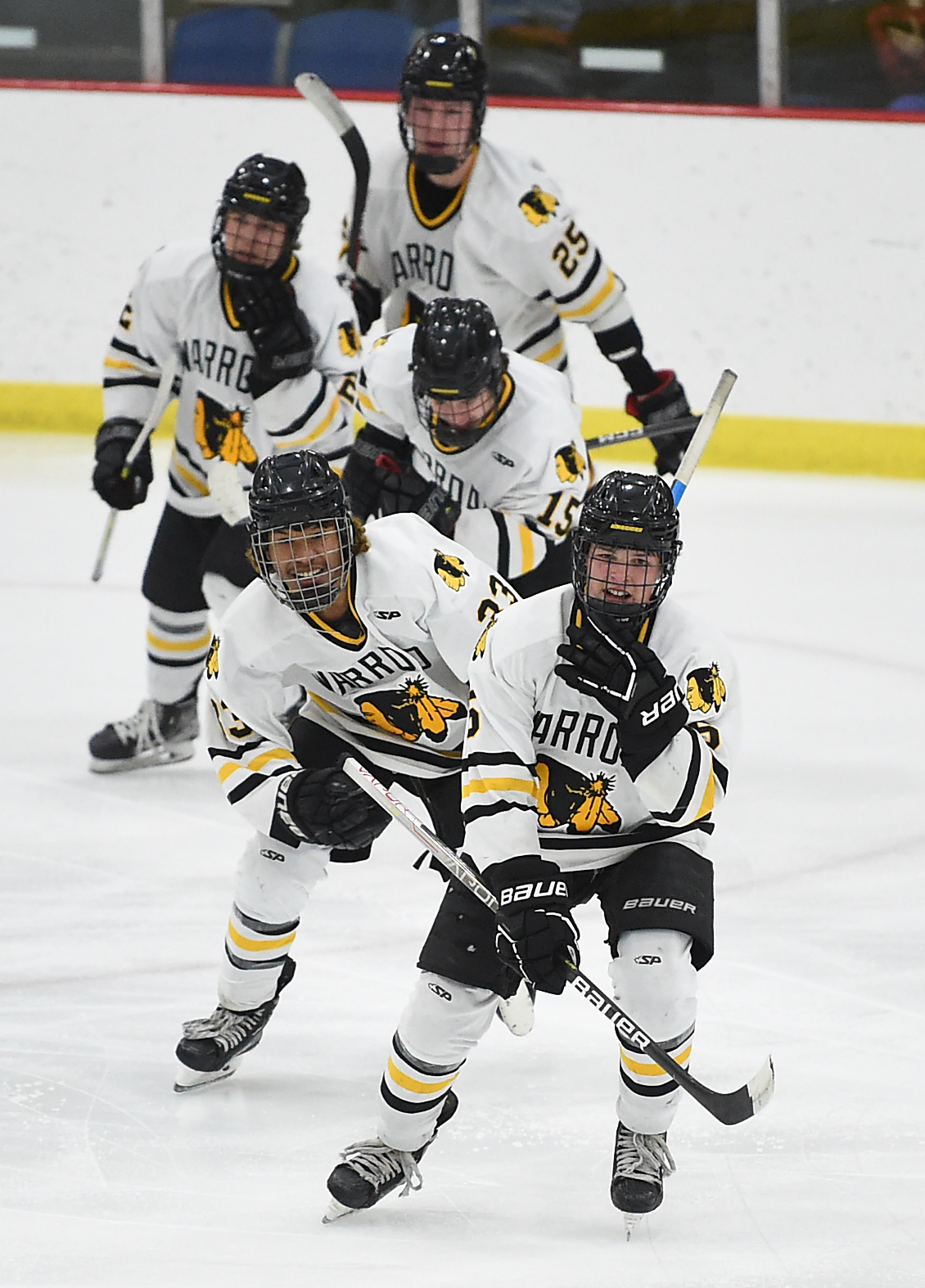 Warroad senior Garrett Hennum leads a happy group of Warriors to the bench after his third-period goal put Warroad ahead of Hermantown 2-1 on Saturday. Photo by Loren Nelson, LegacyHockeyPhotography.com