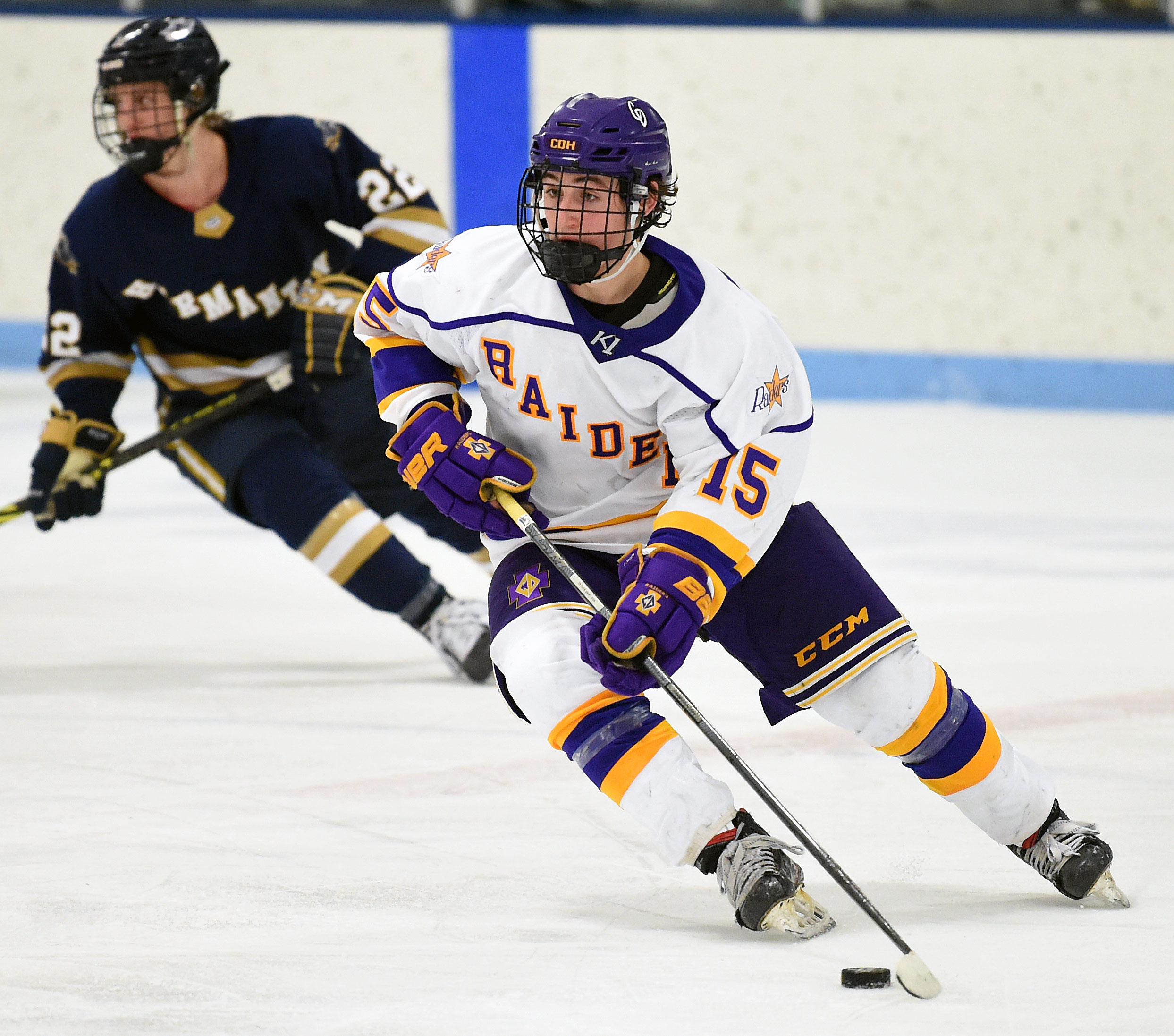 Fast and freewheeling. That’s how Cretin-Derham Hall, with its stable of thoroughbreds, likes to play.

Sometimes, it’s just plain impossible to keep up. Playing the Raiders is like riding an out-of-control merry-go-round or spending a couple hours trapped and tumbling in a commercial dryer. Opposing players skate away from the experience dizzy and disoriented and not at all eager to repeat the experience.

But all that speed can only take a team so far. That point was emphasized in Tuesday’s loss to St. Thomas Academy, the Raiders’ second to the arch rival Cadets this season.

“We love to high fly and really get after it,” Cretin-Derham Hall coach Matt Funk said Thursday after the No. 1-2A Raiders beat Hermantown 4-2 at St. Paul’s Highland Arena. “But in these games, you’ve got to bear down and pay attention to details.”

Details like not panicking in third period at the first sign of adversity. Details like avoiding dumb penalties. Details like, late in regulation, finding an open patch of ice in front of the crease, just in time to corral a pass through an assortment of sticks and skates then shift the puck from forehand to backhand and shovel it high into the net for the winning goal.

That last detail was delivered by junior Attila Lippai with 4:56 remaining Thursday against the previously unbeaten Hawks, No. 1 in Class 1A and arguably the best team in the state, given their wins this season against Class 2A powers Benilde-St. Margaret’s, Hill-Murray and Wayzata.

More from the game: Special teams boost Raiders past Hawks in showdown of state No. 1s

“That was a huge, huge goal for our team,” Raiders’ senior defenseman Zach Sondreal said. “Obviously we were a little upset about the loss on Tuesday but coming back and bouncing back like that as a team shows the character we have this year.”

The Raiders led Hermantown 2-1 heading into the third period on Thursday. The Hawks’ Kade Kohanski tied it at 2-2 early, providing a collective gut-check moment for the Cretin-Derham Hall bench.

“We gave up that second goal to tie it and everybody was up, ready to go,” Funk said. “That's what we talked about. It's going to be like that in February and March.”

Added Lippai: “I feel like we had a different mentality coming into this third period. We were like, ‘We just have to close this one out.’ I thought we really came out hard and battled.”

That resolve extended all the way down to Lippai’s stick and the type of shot he chose for the winning goal. Backhand shots typically have not been kind this season to Lippai, one of the fastest Raiders’ speedsters.

“I had some bad history going on the backhand, but that one found the net,” said Lippai, who failed to score on backhand shots on two breakaways in a victory over Benilde-St. Margaret’s earlier this season and misfired again on a backhand on a first-period breakaway against Hermantown (6-1-0).

Hermantown coach Pat Andrews, who assembled the Hawks’ uber-ambitious schedule loaded with top-ranked Class 2A and 1A opponents, wasn’t banking on an unbeaten season.

“I mean, it’s awesome that they're so competitive,” Andrews said about his group that played without star forward Zam Plante for the fourth straight game. “They want to win every game, everyone does. But it was inevitable. You're not gonna win every game with that schedule.” 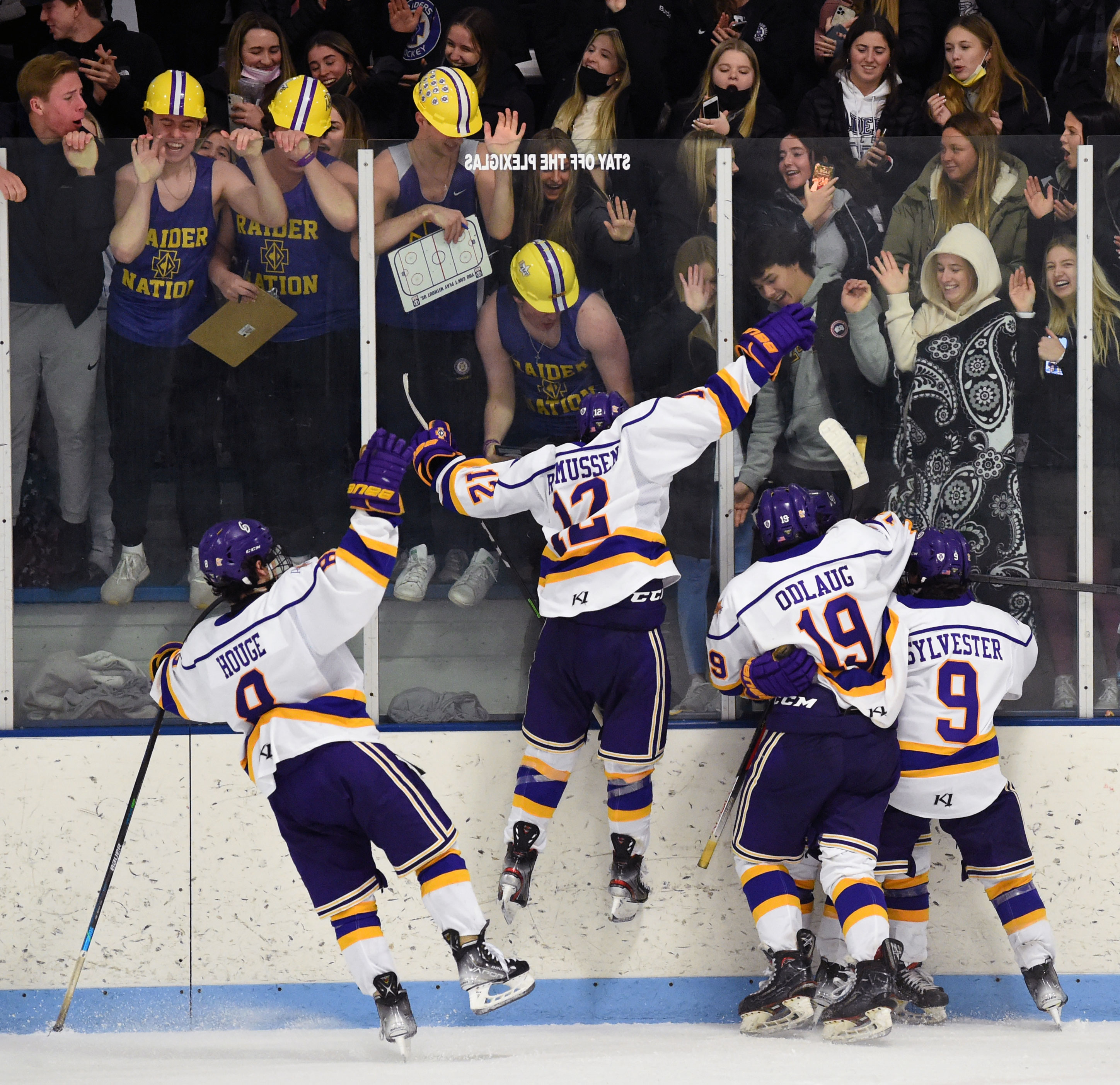