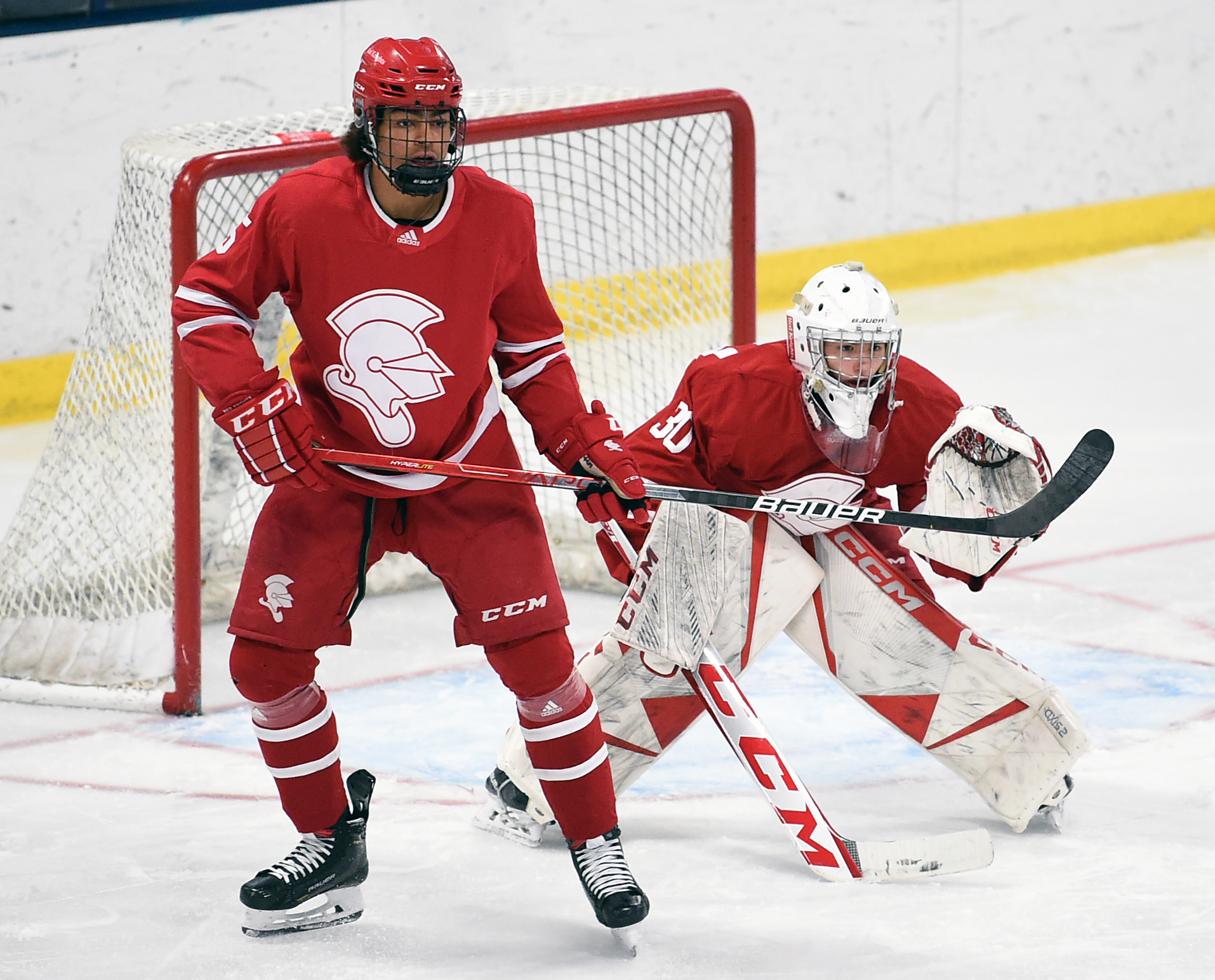 Intimidating? The 200-pound Phillips isn’t so much a hockey player as he is a human battering ram. Phillips, a Benilde-St. Margaret’s sophomore defenseman in his first varsity season, works the corners and front of the net with all the care and precision of a bulldozer.

“He for sure does finish every check,” Red Knights junior forward and leading scorer Drew Stewart said about Phillips, who scored three goals in Wednesday’s 8-2 win over Champlin Park at the Ice Forum in Champlin.  “I mean, sometimes we’d like him to let up just a little bit. But that’s just his passion for the game, and we love it.”

Phillips is an equal opportunity sledgehammer. He came close to jumping out of the rink when freshman Mason Minor scored late in the second period. A jubilant Phillips flung himself high off the glass before splashing down atop Minor as part of the post-goal mayhem.

“He's a big body, but he also has a big personality, you know?” Benilde-St. Margaret’s coach Ken Pauly said. “And it's not showboating. He's truly joyous.”

Phillips scored a goal in each period, using his laser shot on the first two. His third came on a deflection in front with time running out in the third.

“That third one, I don't really know, it just kind of hit my stick,” Phillips said.

It was that kind of night for No. 9-2A Benilde-St. Margaret’s (11-5-0), a team in need of a pick-me-up. The Red Knights’ six-game win streak was snapped on Monday in a 6-4 loss to Mahtomedi. Benilde-St. Margaret’s fell behind 3-0 against the Zephyrs and, despite a spirited comeback attempt, proved to be in too deep of an early hole.

No. 16-2A Champlin Park (10-5-0) led 2-0 midway through the first period, but this time the Red Knights not only took control but also surged into the lead. They scored twice in the closing minutes of the first period to tie it and then added four unanswered goals in the second. Phillips ignited the comeback with a power-play goal with 3:13 left in the first to cut the Rebels’ lead to 2-1.

“The kid has got a cannon, he can really shoot the pill,” Pauly said about Phillips, whose 15 points is tied for fourth most on the team.

Phillips played on the Red Knights’ junior varsity last winter and in the Upper Midwest High School Elite League this fall. While he’s still learning the do’s and don’ts of varsity hockey — moving the puck more quickly and cutting down on penalties (he's been called for a team-leading 11) are points of emphasis — his upside is, well, to the moon.

“He’s a freaking physical specimen, he just is,” Pauly said. “He’s got that big stride and everything else.

“This guy is what, 15? So, I mean, you can’t even think about putting a cap on (his development). For NHL scouts, if you're a defenseman and you are over 6-5, they’re going to keep watching until you prove you can’t play.”

“It's scary that a kid in his first varsity year is that good, right?” Potter said. “I mean, he's a big kid, physical … he's got skill and good skating, hands. As a defenseman, he's not afraid to jump up into the play. As you can see, he put in three on us tonight. And he’s not even driving yet.” 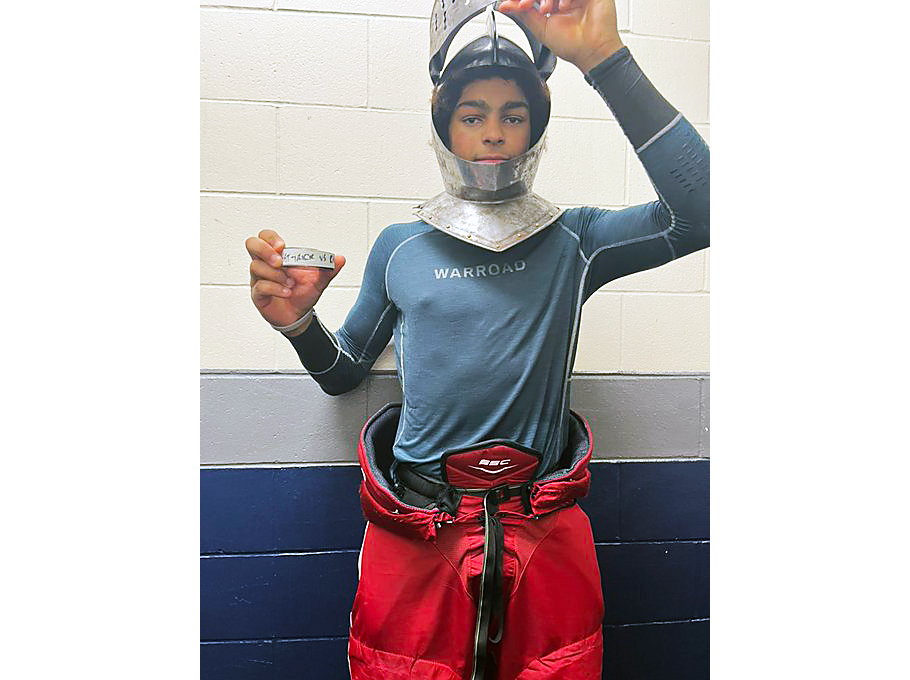 Potter, who boasts a trio of standout seniors in forwards Jordan Ronn and Evan Williams and defenseman Drew Belleson, knows all about high-end talent. His Rebels have faced several of the state’s elite programs, acquitting themselves well against the likes of Hill-Murray (3-2 win), Andover (3-2 overtime loss) and Rogers (6-5 loss).

“(Benilde-St. Margaret’s) is probably one of the better skating teams we've seen this year,” Potter said. “And we’ve played some good, competitive teams. They came out fast (in the second period) and responded fast and our guys weren’t really quite ready for it, I don’t think. Not our best effort, but a great one to build on.”

The victory is sure to inject confidence in Phillips, who traded his hockey helmet for the monstrosity that is the shiny silver knights helmet that goes to the team’s Player of the Game. He tugged it on, then flipped the lid up to pose for photo while holding the game puck with tape denoting his hat trick wrapped around the edge.

Phillips deftly deflected praised for his performance, instead focusing on his team’s dominant outing.

“It was pretty cool,” he said about the his first varsity hat trick. “It’s fun to see what we can do when all the boys are just getting the puck on net and, you know, moving around. I think we really played as a team tonight, so that was kind of a fun win.” 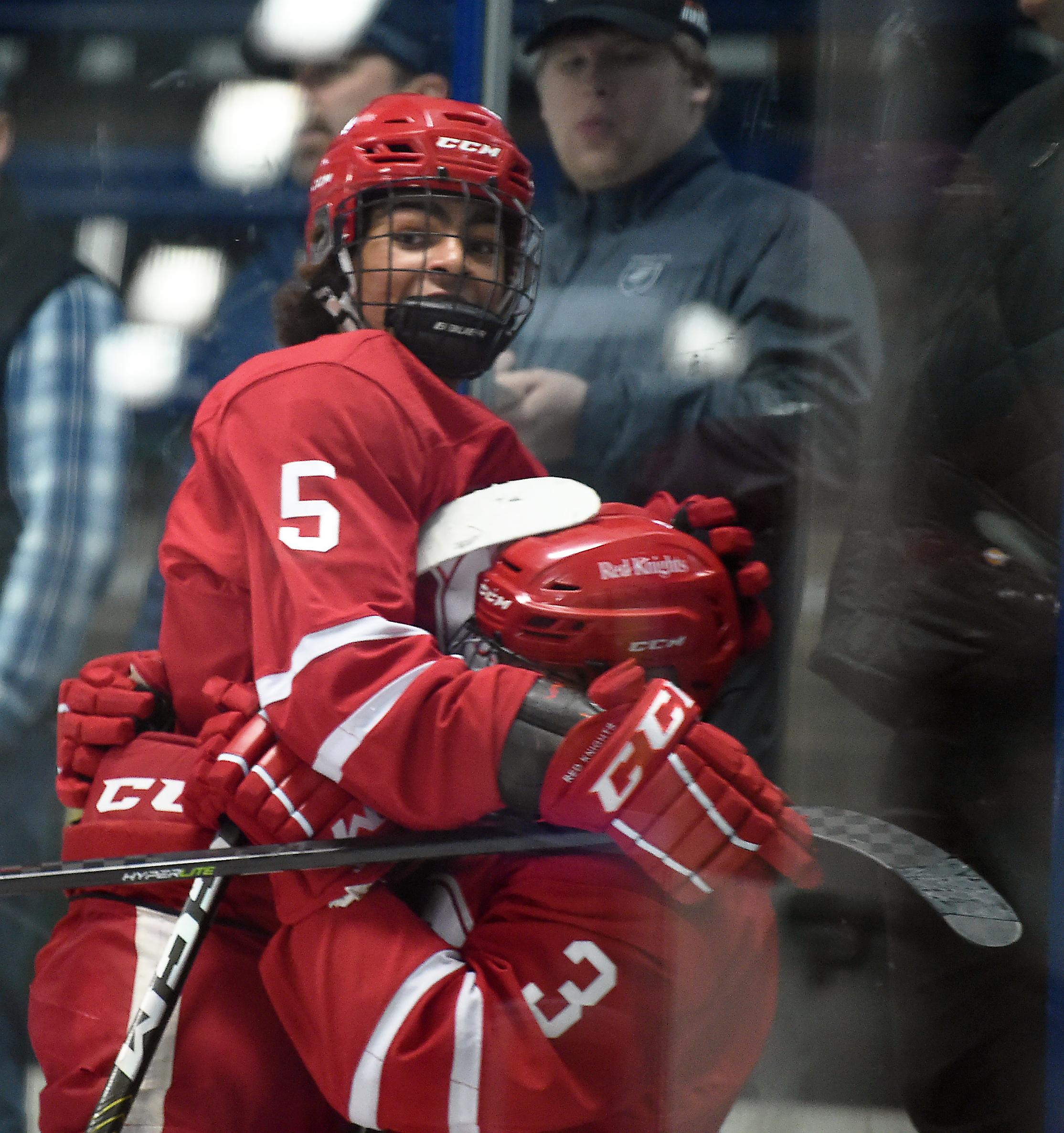