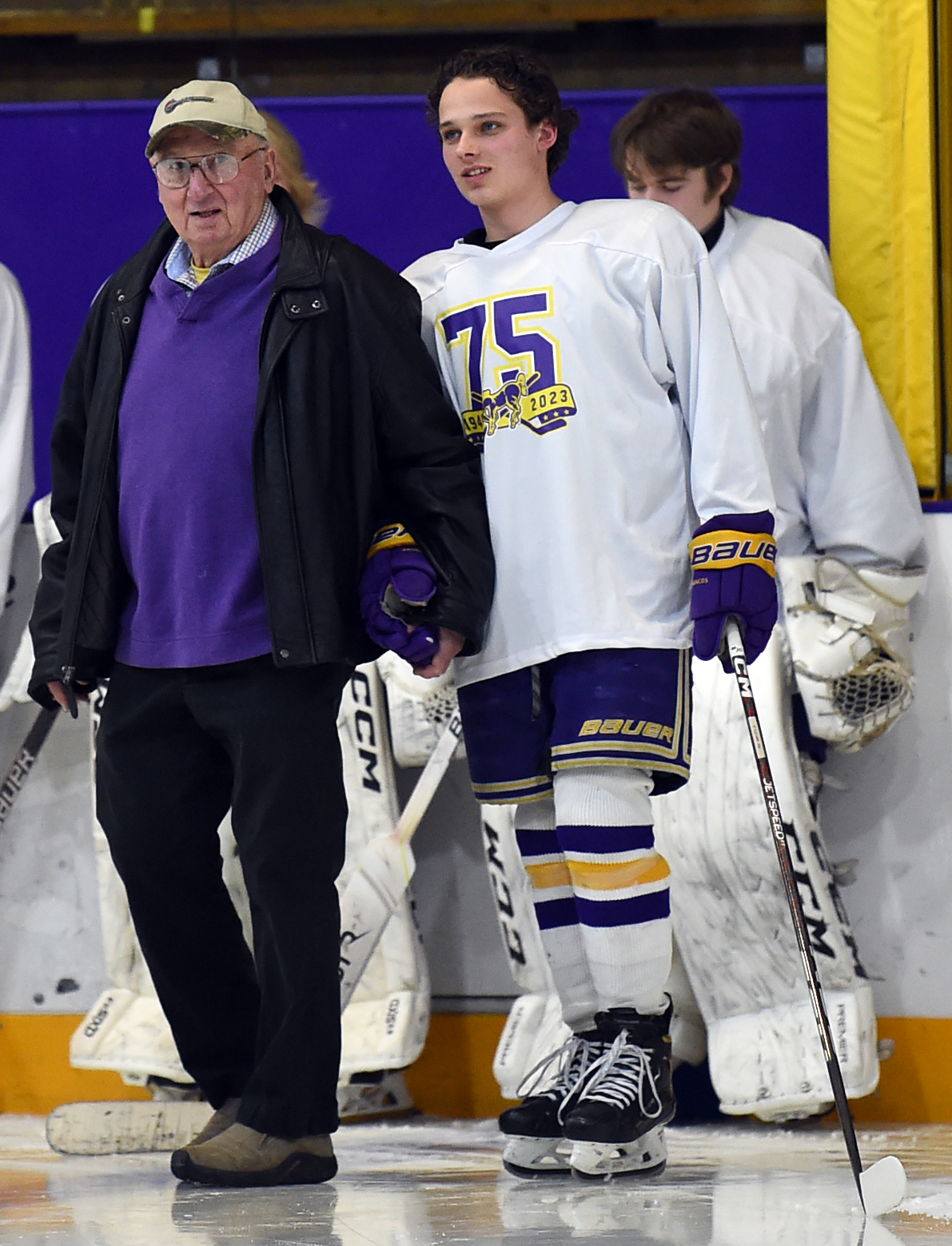 Jim Wherley, the starting goaltender on International Falls' 1957 state championship team, is escorted onto the ice by his grandson Matt Wherley, a senior Broncos defenseman, during Friday night's celebration of the program's 75th anniversary. Photo by Lo

International Falls played St. Paul Johnson on Friday night, but it wasn’t so much a hockey game as it was an event. Put more accurately, a celebration.

The Bronco Arena parking lot, lined with 10-foot snowbanks, was jammed more than an hour before puck drop. Members of the fabled Dirty Dozen pep band were among those packing the bleachers inside, adding to the Mardi Gras atmosphere by playing alongside International Falls’ current high school band.

And the pregame ice was loaded with some of the legendary players in International Falls’ storied 75-year history. Hockey royalty in the “Icebox of the Nation” that sits hard against the Canadian border.

David Brown, a star forward on International Falls’ 1972 championship team, was announced as one of the program’s greatest all-time players, a talent comparable to the likes of celebrated Broncos legends such as Tim Sheehy and Keith “Huffer” Christianson. Jim Knapp, captain of the ’72 team who had recurring dreams of hoisting the state championship trophy before finally doing so in real life, hammed it up with a wave and big smile as he walked onto the ice.

Members of the earliest Broncos teams were announced last, and Jim Wherley, starting goaltender on International Falls’ first of seven state championship squads, in 1957, was escorted onto the ice by his grandson and current Bronco Matt Wherley, a senior defensemen.

“I hugged him and told him 'I appreciate you doing that,'” Jim Wherley said about his grandson escorting him onto the ice.

International Falls players wore warmup jerseys commemorating the event. On the back was the number 75 in purple with seven gold stars, signifying each of the program’s state championships, lined up across the top.

The ceremony ended with current Broncos shaking hands with their predecessors.

“I told one of the players you have seven stars on the back of your jersey, but that’s not enough, we need more,” said John Prettyman, a former Broncos player and head coach.

The present-day Broncos, fully inspired by the pregame festivities, played like champions against St. Paul Johnson, another program with a rich state tournament history.

“All these fans, the band, everybody out here, it was quite a rush for us,” said junior forward Royce Allan, who scored 14 seconds into first period and finished with a hat trick in the Broncos’ 12-1 victory over the Governors. “Getting to shake the hands of all those guys who played in the state tournament, that was pretty cool.”

Broncos boosters Nikki Skifstad and Stephanie Dremmel, each of whom have sons on the team, were among the organizers of the event. For eight weeks, they spent their evenings gathering contact information for former Broncos, who they then invited to the event. Some last-second problem-solving was required, too, as regular public address announcer Marc Glowack was a late scratch because of illness. Former Broncos player Mike Bolstad filled in as the master of ceremonies with about 10 minutes of notice.

Skifstad said it was a lucky coincidence that Friday night’s game was deemed the best on the Broncos’ schedule to host the celebration (most of town’s youth teams were available to attend) given that St. Paul Johnson and International Falls met twice in back-to-back state title games in the 1960s. Johnson has won four state championships.

Longtime St. Paul Johnson coach Moose Younghans said his players were well-schooled in the importance of the night for the Broncos and all of International Falls.

“They’re very aware of the history of these programs,” he said as he surveyed the pregame scene. “It’s a great thing to pay tribute to those players and teams that came before you.”

About 70 former Broncos who played in the state tournament were honored on the ice before the game. The Bronco Arena crowd was the largest since the resumption of International Falls' temporarily dormant series against Rainy River neighbor and arch rival Fort Frances, Ontario, during the 2015-16 season.

“You know, we’re a proud hockey community and this is just a really nice night for our town and our team,” Broncos coach Chad Baldwin said after the game.

International Falls players are mobbed by young fans as they leave the ice after a 12-1 victory over St. Paul Johnson. Photo by Loren Nelson, LegacyHockeyPhotography.com