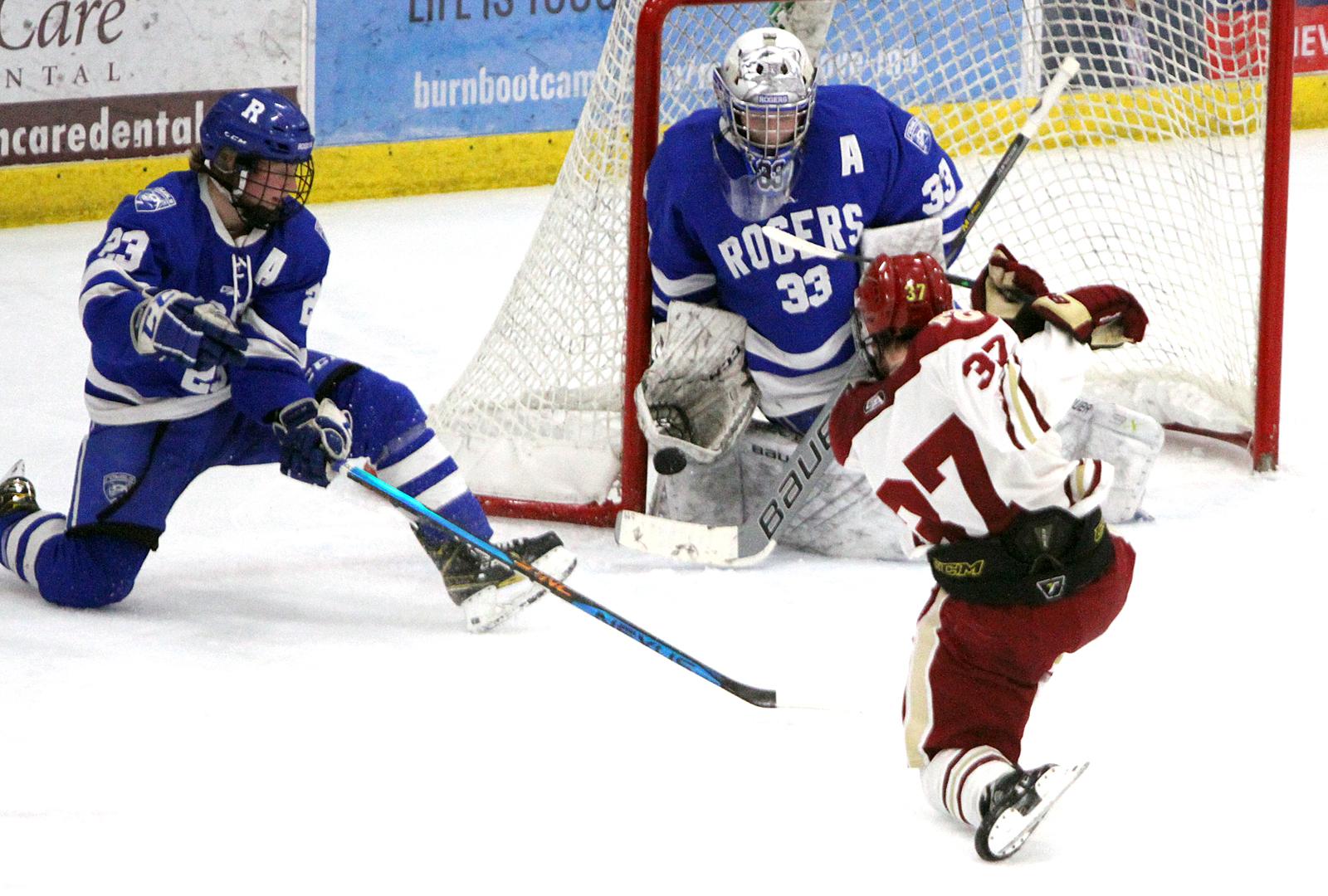 Maple Grove forward Joey Imgrund is stopped on a scoring chance by Rogers' goalie Cade Chapman. Chapman made 50 saves in the Royals' 3-3 tie vs the Crimson. Photo by Drew Herron, LegacyHockeyPhotography.com

About 15 minutes and 12 miles of Interstate 94 separate Maple Grove from its expanding neighbor to the north.

But in terms of hockey might, the strength of its feeder programs and the recent pedigree over the last quarter century, the Crimson and Rogers have remained worlds apart.

That is, until now.

The No. 3-ranked Crimson and No. 6-ranked Royals added another notable chapter in its growing and increasingly fierce rivalry Saturday afternoon, battling to a 3-3 overtime tie before a full house at the Maple Grove Community Center.

The lead changed hands three times, a total of 41 minutes on 11 penalties were handed out and 87 shots were put on net. All wrapped up in a tight, two-hour storm.

“It was a fiery game, both teams understand the other is a rival to be respected,” Rogers coach Dave Brown said. “Today had a section final feel from the opening puck drop to the final buzzer.”

This Northwest Suburban Conference clash was circled on the calendar long ago by both sides, but especially by the Royals, who last season defeated Maple Grove during conference play, only to see their season end in the Section 5AA championship game with a 4-2 loss to the Crimson.

Frustrating as it is for Rogers (9-2-3), there is a growing mutual respect for the two sides, and a fair share of triumphs earned through the youth ranks have the Royals confident they can compete against the Crimson as well as anyone.

“We know these guys,” said Rogers’ senior captain Sam Ranallo. “At youth level and all the way up through high school, they’re a really good program that’s hard to beat. Now, we’re starting to get right up there with them, and it’s really cool.”

Ranallo scored twice, including the game-tying goal with 4:13 to play, pushing his team-leading totals to 11 goals and 23 points.

In the 20 years Rogers has been playing high school hockey, the Royals have had occasional success, reaching 20 wins twice, and posting 12 seasons with a winning record. But perhaps the biggest factor in fueling Maple Grove (12-2-1) is its enormous youth program, one of the biggest, if not the biggest, association in the state. Osseo/Maple Grove has 29 travel teams ranging from Bantams to Squirts. Rogers, conversely, has 13.

Not exactly apples to apples in terms of sheer numbers, but the gap appears to be closing in terms of high-end talent. The current group of Royals has had a lot to do with the meteoric rise of the program, and the opposition knows it.

Drawing serious attention along with Ranallo is senior defenseman Chase Cheslock, a 6-foot-3, 205 pound defenseman committed to St. Thomas, as well as super sophomores Mason Jenson and Parker Deschene. Jenson’s eight goals and 17 points make him the team’s second-leading point producer behind Ranallo, and just ahead of Deschene (7-9-16).

“It’s good to see them with dynamic players who are capable of making highlight-reel plays,” said Maple Grove coach Todd Bergland. “You put that with a couple of monster defensemen, and look out, you’ve got the makings of something special. And I know they’ve got some great kids coming.”

Maple Grove, last year’s Class 2A state runners-up, is certainly not without weapons. Not least of which is senior captain Finn Brink, a Wisconsin commit who leads the team with 16 goals and 36 points. Brink finished with a goal and two assists Saturday, and said he relishes in playing in these kinds of games, and always looks forward to Maple Grove's showdowns with Rogers.

“Over the years, they’ve just kept getting better and better,” Brink asaid. “And this is for sure the best team we’ve ever played from Rogers. They’re just a really strong organization that continues to get stronger.”

“We always know we’re going to get their best, and they want to beat us every time we play them,” Brink added. “We want to beat them just as much.”

The Crimson know the conference and the section title will have to go through Rogers. A strange concept a decade ago, but as the extreme northwest metro continues to develop, Maple Grove finds itself with high-level company.

“”We know they’ve got a good hockey team, and they’ve got good kids coming,” Bergland said. “I’m anxious to play them again, and we know our path goes through them.” 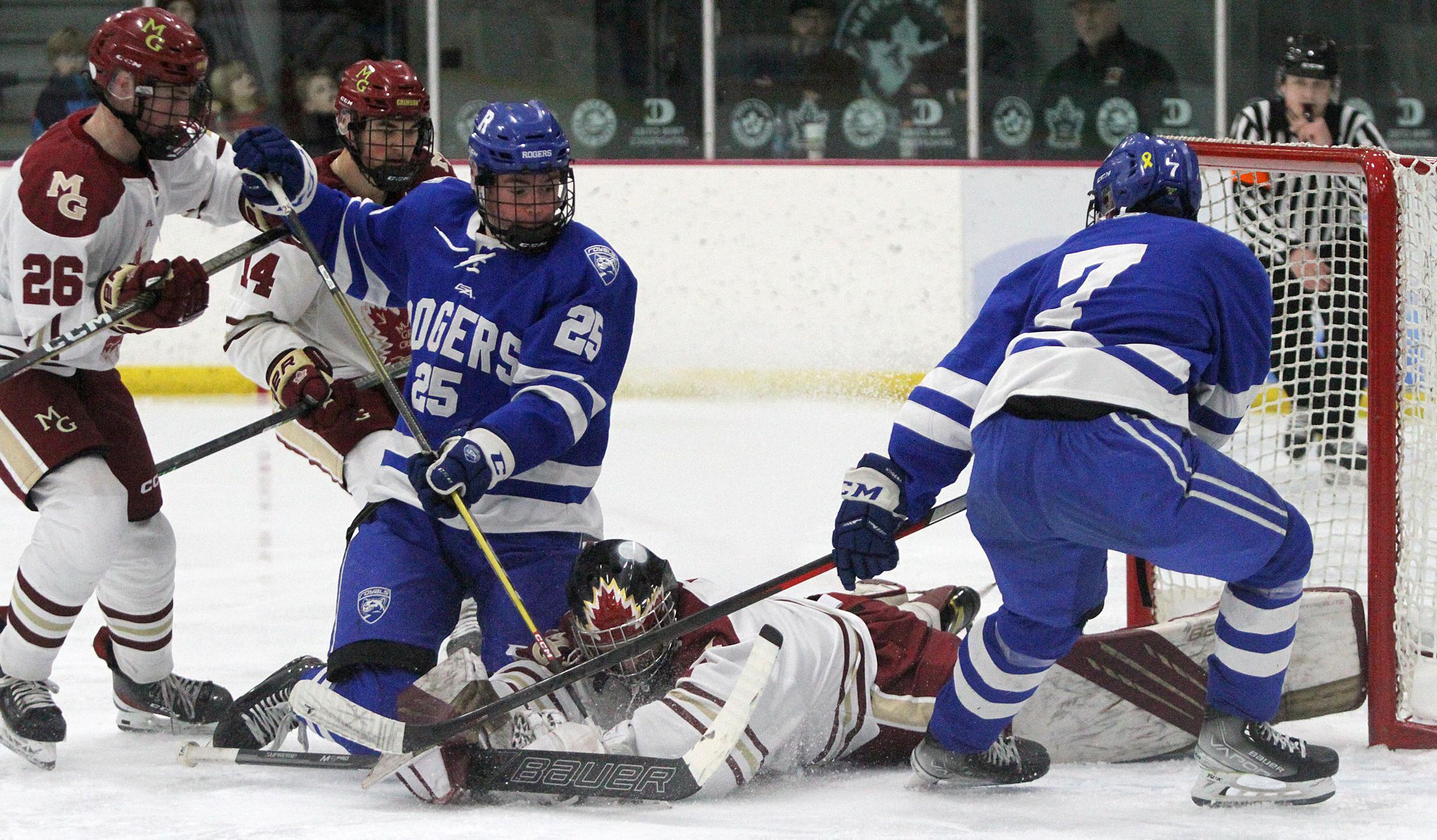 Maple Grove and Rogers added another notable chapter to their growing rivalry Saturday afternoon, battling to a 3-3 overtime tie before a full house at the Maple Grove Community Center.

After a scoreless first period, Rogers struck first on Carson Melquist’s goal just more than five minutes into the second, though Maple Grove answered on a late goal from Jay Ellingson.

In the third, the lead changed hands twice, Rogers’ goal from Sam Ranallo was followed by two goals from Blake Steenerson and Finn Brink for the No. 3-2A Crimson. No. 6-2A Rogers and Ranallo answered a minute later, as the game swung on a pendulum with three scores in three minutes.

Rogers started the overtime session with a man advantage following a major penalty call on Maple Grove, though neither side could convert.

Rogers (9-2-3) got a standout performance from senior goaltender and alternate captain Cade Chapman, who fought through illness to make 50 saves for the Royals. Ranallo’s two goals give him 11, and ups his points total to 23. 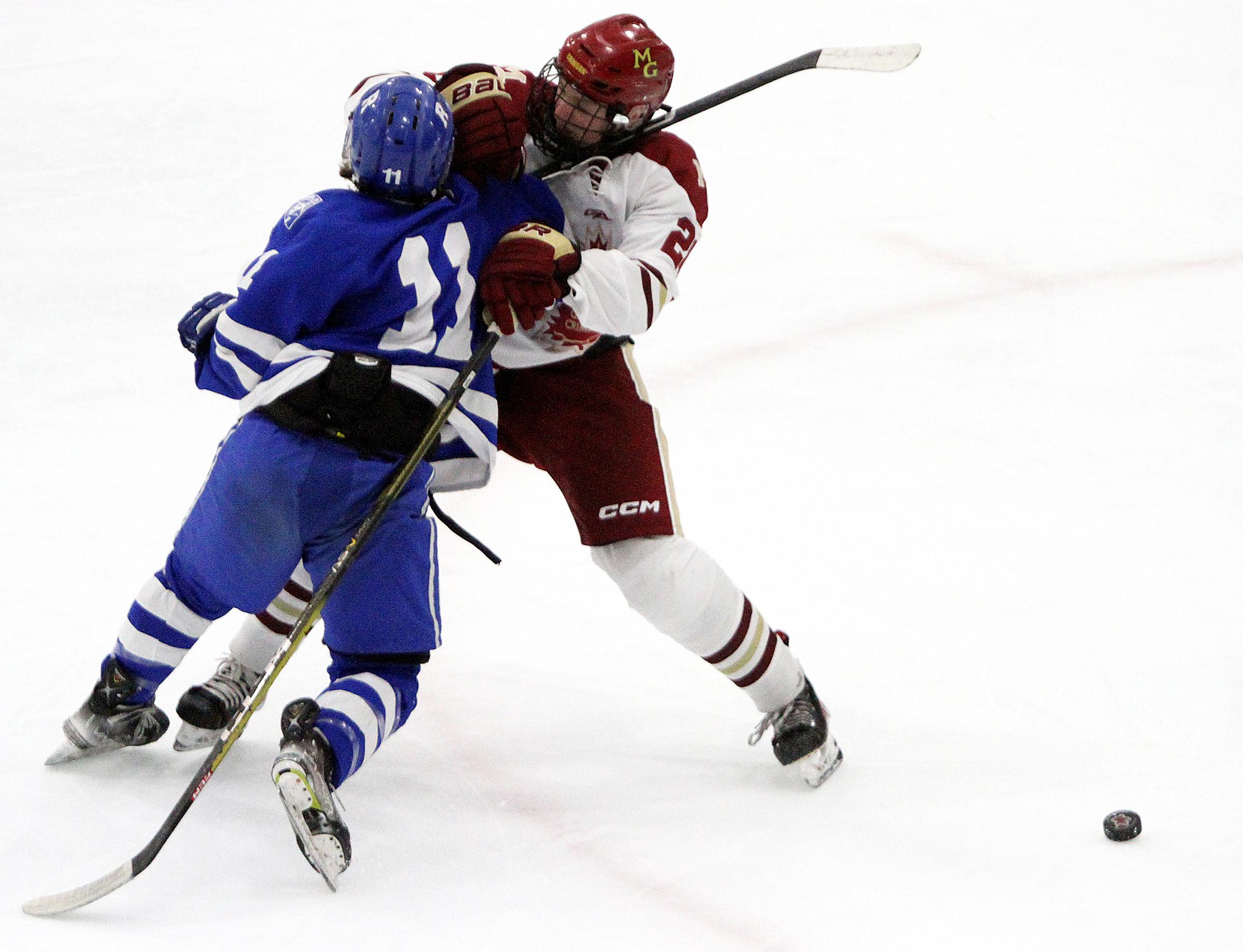