Short-range tallies during net-front scrums carry Trojans past Minnetonka in matchup of the No. 1 and 2 teams in Class 2A 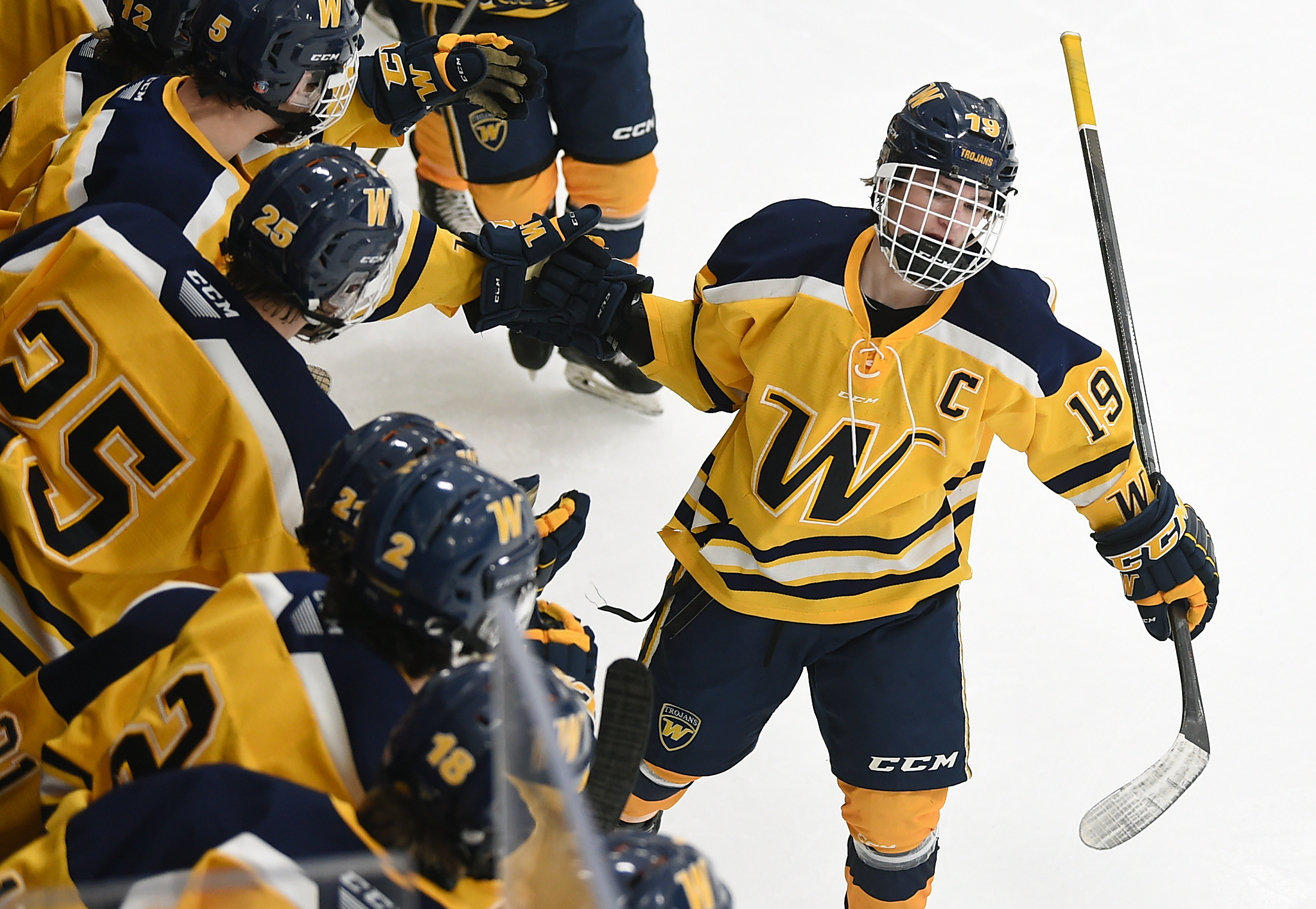 Wayzata's Luke Miller celebrates his second-period goal in the Trojans' 3-1 victory over Minnetonka on Saturday. Photo by Loren Nelson, LegacyHockeyPhotography.com

The shots that produced Wayzata’s three goals on Saturday against Minnetonka traveled a combined — give or take — 3 feet.

“I don’t know if it was even 2 feet,” Trojans junior Cade De St. Hubert said about the length of the longest goal-producing shot by the Trojans in their 3-1 victory in front of a near-capacity crowd at the Pagel Activity Center.

Precise measurements aren’t necessary. The matchup between the state’s No. 1 and 2 teams in Class 2A wasn’t won with laser shots, dekes, toe drags and no-look passes but instead with brute force and unflagging willpower.

Dirty, indeed. Miller scored during one of the goalmouth scrums that involved all 10 skaters from both teams occupying an area in front of the net no bigger than a living room couch.

Miller scored his second period goal in dirty — some might call it filthy — fashion. Instead of trying to hammer the puck through a five-body pileup at the right side of the net, he swerved behind the goal and stuffed the puck in the opposite side. His goal, the only one in the second, put the No. 2-2A Trojans (10-1-1) ahead 2-0.

Wayzata’s Cade De St. Hubert made it 3-1 late in the third when he hammered home a fourth rebound try while sliding on his knees. Gritty goals are directly in De St. Hubert’s wheelhouse, as he scored in similar fashion in overtime in Wayzata’s 5-4 win over Cretin-Derham Hall at a holiday tournament in Maple Grove.

“A lot of our practices are compete drills,” De St. Hubert said. “I don’t know if we just throw pucks in front and grind, but I know a lot of practices they’ll have us competing and working in front of the net and in the corners.

“I love compete drills. I think everybody on the team does.”

The Trojans have scored their share of highlight-worthy goals with tic-tac-toe passing and jet-speed rushes. “We probably have the most skill we've had in 10 years,” O’Leary said.

But the Wayzata Way — smothering defense first, all else second — is still ingrained deep in the team’s collective DNA. De St. Hubert, who transferred from Hopkins to Wayzata last fall, fits snugly in the Wayzata mold.

And a high-energy one at that.

Sam Scheetz’s goal 19 seconds into the third period energized Minnetonka’s bench and the home crowd, but the No. 1-2A Skippers (9-2-0) had difficulty finding holes in the Trojans’ defense and generating high-quality chances. Minnetonka did have 45 shots on goal compared to 22 for Wayzata, but Trojans senior Will Ingemann, who ranks among the state’s top 10 in both goals-against average (1.50) and save percentage (.945), was again sharp in goal.

“Sometimes the game is that simple, it gets won at the net,” Minnetonka coach Sean Goldsworthy said about the numerous goalmouth pileups. “When both teams cancel each other, sometimes it turns into a couple rebounds and some heavy sticks around the net.” 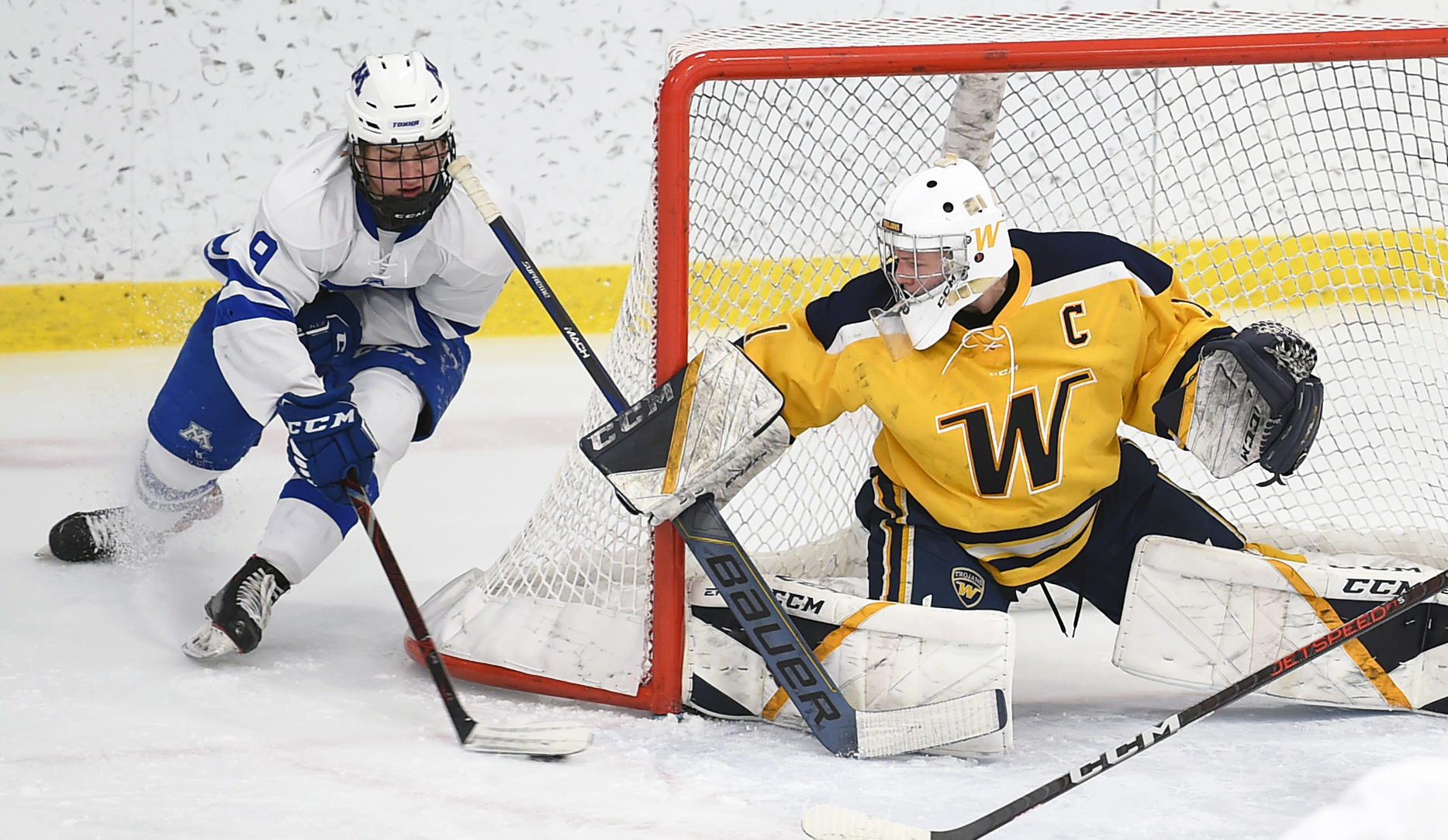 Luke Miller’s second-period goal proved to be the winner as Wayzata held off Minnetonka 3-1 on Saturday afternoon in a matchup of the state’s top two big-school teams, each with just one loss, in front of a near-capacity crowd at the Pagel Activity Center in Minnetonka.

Miller alertly avoided a mass pileup of bodies at the right side of the net, instead cruising behind the goal and stuffing it behind Skippers’ goaltender Kaiser Nelson to put the No. 2-2A Trojans (10-1-1) ahead 2-0 4:46 into the second period.

All three Wayzata goals came from short range during scrambles in front of the Minnetonka net.

Cade De St. Hubert’s goal with 7:06 remaining helped clinch the victory for Wayzata, which went its first nine games without a loss and was the state’s last unbeaten Class 2A team before losing 4-3 to Maple Grove on Dec. 29.

Colin Bierman scored a first-period goal for the Trojans, who got 44 saves from senior goaltender Will Ingemann, one of the state leaders in goals-against average (1.50) and save percentage (.945).