West is winning direction for Edina 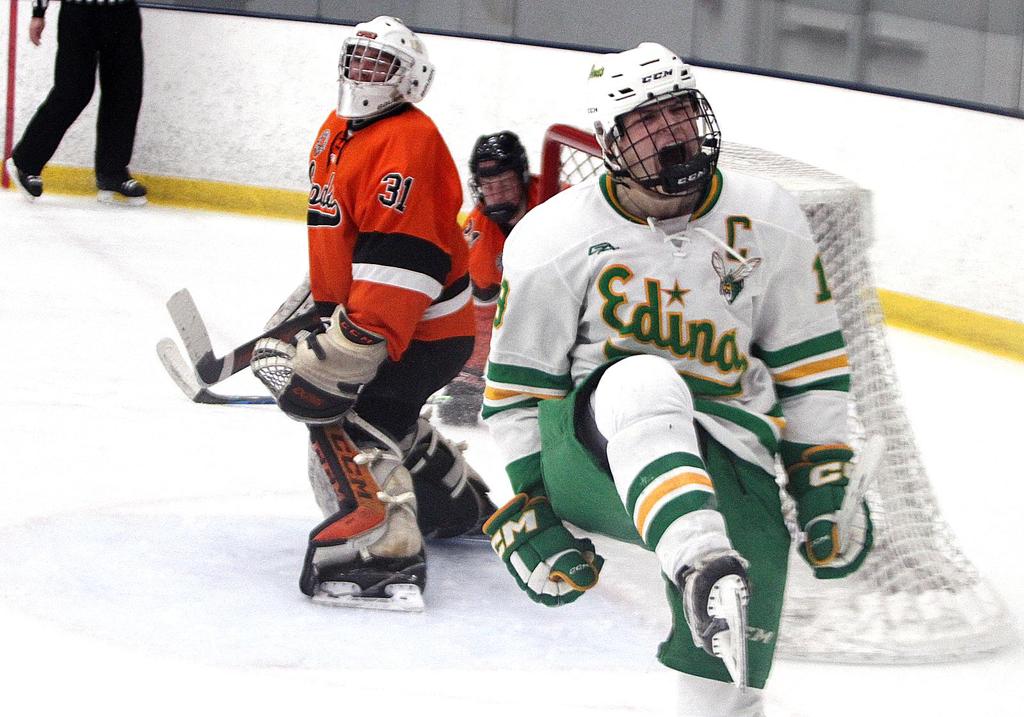 Since dropping its first three games, Edina is heating up as December winds down.

The No. 7-2A Hornets (5-3-0) earned their fifth-straight win Tuesday night with a gritty third-period effort that pushed them past Moorhead 3-2 in the first round of the Tradition Holiday Invitational at the Dakotah! Ice Center in Prior Lake.

Strong two-way players with rifle shots and a propensity for finishing checks, Nevers leads the Hornets in scoring with seven goals and 10 points, followed closely by West’s four goals and nine points.

The freshman’s game mirrors that of the junior in increasingly complete fashion, as the two hammer on the opposition and fuel each other’s drive to demonstrate what it means to be a complete player.

“Growing up, we’ve always pushed each other,” Nevers says. “He pushes me to the max, and I try to push him.”

The two are driving the surging Hornets with a growing amount of offensive flash, as well as an emerging reputation as a line that’s terribly tough to play against. Nevers missed time early in the season, but since returning from injury, the Hornets have taken flight.

“He’s a strong player that makes strong plays,” Edina coach Curt Giles said. “In high school hockey, when you have a good-sized player that can move like that, finish checks and play physically, it’s a big asset. Not only is he physical on the defensive side, but he goes hard to the net. It’s hard to stop.”

The combination of speed, skill and muscle that Nevers brings is irreplaceable, but West is doing all he can to imitate Nevers' all-around game, and is becoming more and more of a replica with each passing week. The scoring production is close, and the physicality is too.

“I’ve been learning a lot by watching his game,” West says of Nevers. “What he does, I feel like I can do, too, and a big part of that is finishing checks. He’s a great all-around hockey player.”

Giles sees a lot of similarities between the two, and expects West to become more and more effective as he continues to mature physically. It’s an elite class of players who have played such a role as a freshman at Edina, but West has been up for the challenge.

“He’s done really well, and he’s done it from the start,” Giles says. “He sees the ice really well and does good things. Now, he’s physically catching up a little bit. Mason is contributing and learning as he goes along.

It’s a big jump from Bantams to high school, but West is making it look easy with smarts, good hands and an eager approach to physicality. Kept off the scoresheet through the first weekend of the season at the Turkey Trot in Plymouth, West scored his first varsity goal in a 3-2 loss to Holy Family on Nov. 28. Since then, he’s tallied at least a point per game, and the Hornets have not lost.

Nevers had seven points in 20 games for the Hornets as a freshman in 2020-21. He says the high school leap is coming easier for West, who has already matched his own goal production as a freshman.

“I came in as a freshman, but he’s way better than I was,” Nevers said. “He’s comfortable and ready to go. He’s one of the smartest players I’ve ever watched. He’s out here making big plays, and he’s so much fun to play with.” 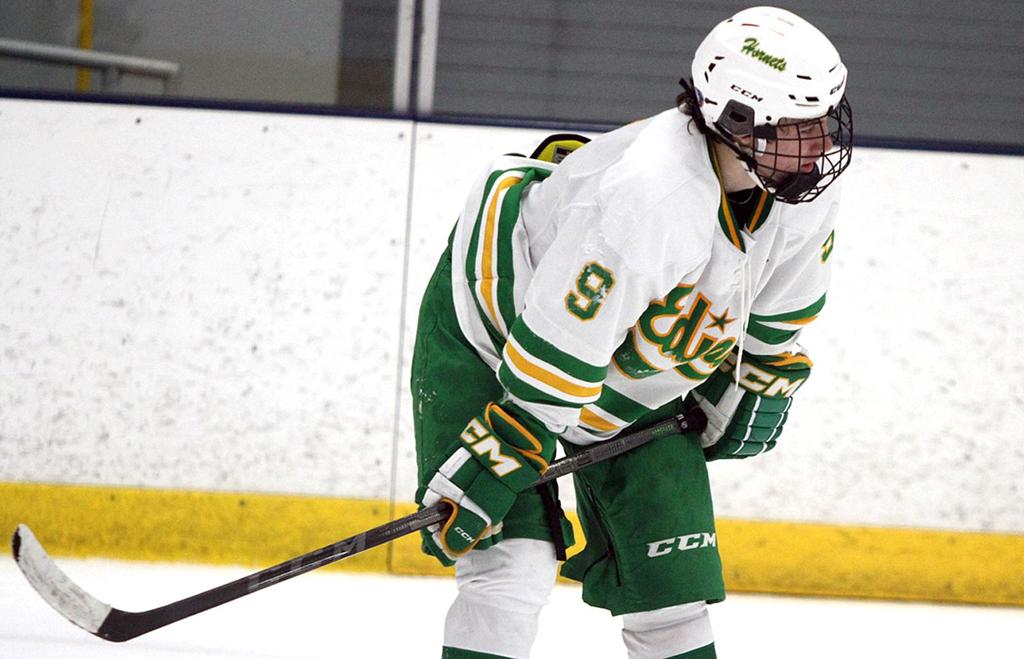 Edina freshman Mason West is averaging better than a point per game during the Hornets' five-game win streak. West has 9 points and four goals in eight games. Photo by Drew Herron, Legacy Hockey

Edina rallied with a pair of goals in the third period, including freshman forward Mason West's winner, to knock off Moorhead 3-2 on Tuesday night in the first round of the Tradition Holiday Invitational at the Dakotah! Ice Center in Prior Lake.

Junior forward Jackson Nevers scored twice for the No. 7-2A Hornets (5-3-0). His goal 16 seconds into the third period tied the score at 2-2, and he assisted on West's goal 3:38 into the final period.

Jack Arnold scored the lone goal of the first period as No. 14-2A Moorhead (5-4-0) took a 1-0 lead. Nevers and the Spuds' Aaron Reierson traded second-period goals.

Edina has won five straight since starting the season 0-3. Moorhead defeated Edina 2-0 on Nov. 26 in the third-place game of the Wayzata Turkey Trot season-opening tournament. 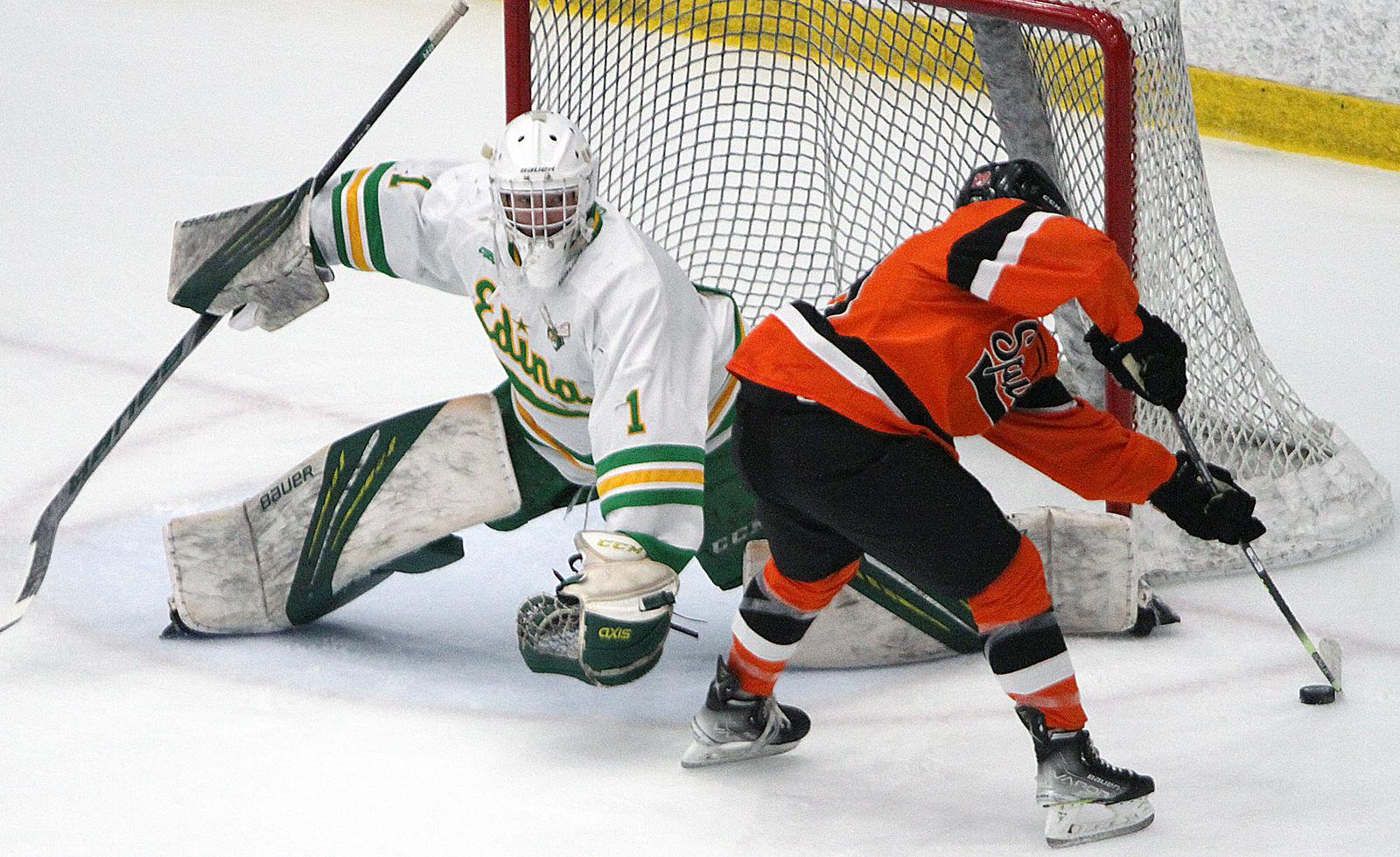