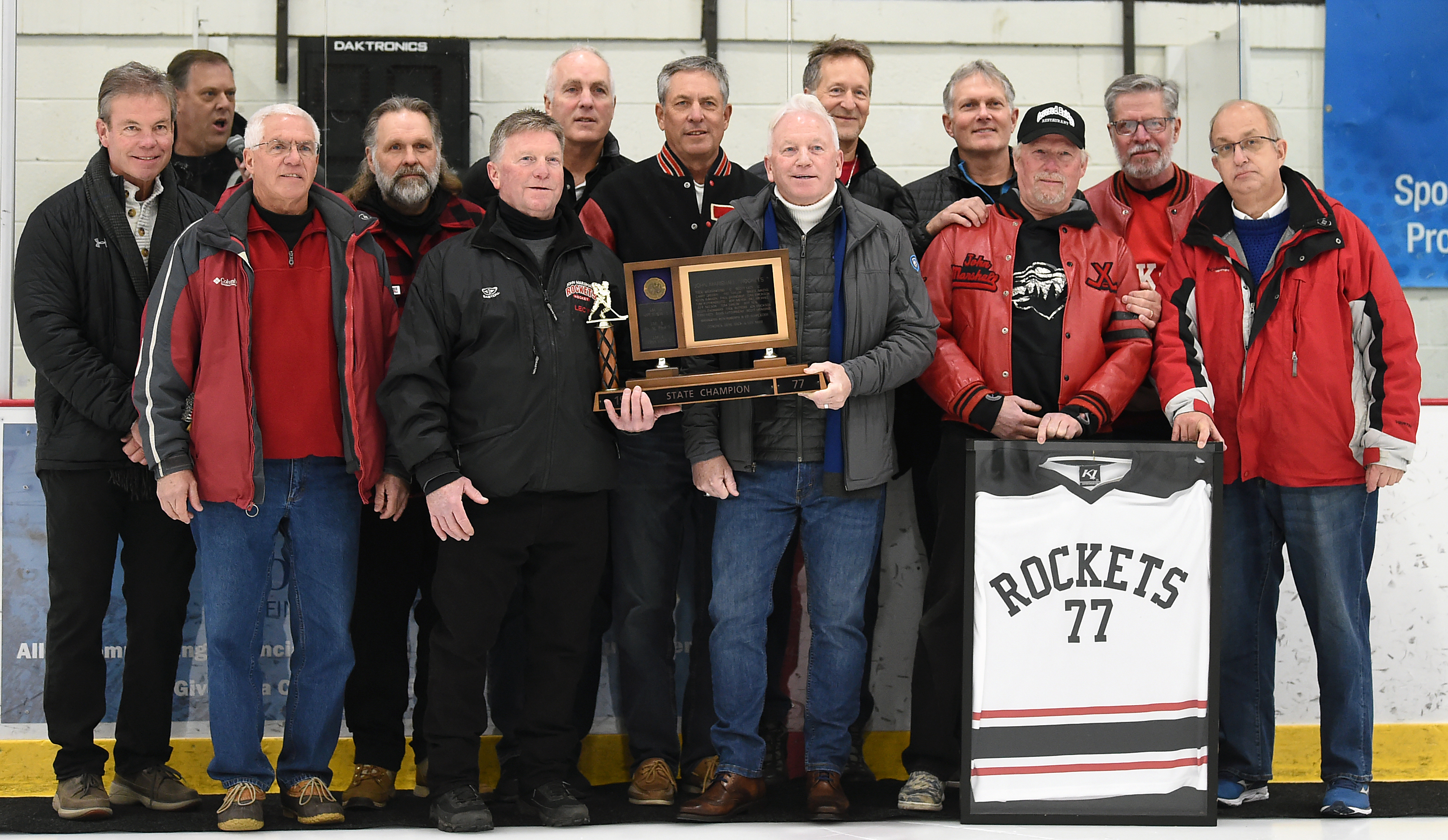 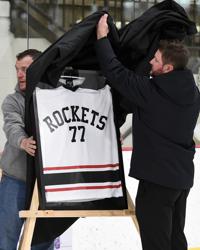 Twelve members of Rochester John Marshall’s 1977 state championship team — one of the most iconic squads in tourney history — gathered Tuesday in Rochester for the retirement of Rockets’ jersey No. 77.

Current John Marshall coach Matt Erredge and his staff had been noodling ideas for years on how to honor John Marshall’s 1977 team — the only state boys' hockey champion in Rochester history.

“The whole premise behind the program was to make sure we gave them their due,” Erredge said about the jersey unveiling ceremony before Tuesday’s game between Rochester John Marshall and Rochester Century at the Rochester Recreation Center. “We didn’t want to retire 12 jerseys, and that’s probably what we would have had to have done.”

The fabled rag-tag Rockets team with mismatched helmets and gloves, the only champion from the deep southern portion of the state, shocked Edina East 4-2 in the 1977 state title game. The on-ice ceremony dedicated to the members of that squad included a brief recap of the team’s accomplishments and introductions of all the team’s players, whether or not they were in attendance.

“It just means so much to everybody, to be able to see all these people, and the effort they made to come back for this,” said Scott Lecy, who as a senior was the top goal scorer in the 1977 tourney with five. “And to be on on the ice together with the guys again … it’s just high school hockey, and it’s the best.

“Whether it’s college or the pros, it always comes back to high school and the buddies you grew up with. That’s what means the most.”

Times have changed, but not much about the team has. Lecy, who scored 61 goals during the 1976-77 season (sixth most in state history) was one of just four seniors on the Rockets’ championship squad. He handled much of the team’s media responsibilities then, just as he did Tuesday night. And he was chosen to make the ceremonial puck drop between John Marshall’s Mason Decker and Century’s Jonah Ottman.

Scott Lecy’s younger brother, Todd, nicknamed “Pudly,” hammed it up during Tuesday’s introductions by pretending to slip on the black carpet laid out on the ice for the team. He’s renowned for scoring the empty net goal that clinched the victory over the Hornets, then running wildly on the ice and into the arms of his brother.

Dan Erickson, who found his way into the foreground of several of the most memorable photographs from the 1977 postgame celebration and has been ribbed endlessly by teammates ever since for doing so, again was a camera magnet. He was in the middle of the group for a time Tuesday, cradling the 1977 championship trophy.

“I tried to give the trophy to Scott (Lecy), but when they announced everybody, I ended up in the middle and they told me to hold it,” said Erickson, a former U.S. Air Force pilot who dusted off an old letterman’s jacket for the event.

The current version of the Rockets played inspired hockey for much of the game before losing to Century 7-2. The score was tied 2-2 through two periods but John Marshall (3-3-1), which has just 20 players in the program, ran out of gas in the third.

“We had that momentum there for a bit,” Decker said, “but that’s been the story of JM hockey for the last few years.”

Decker said he was thrilled to witness the ceremony honoring the 1977 team.

“That was awesome,” he said. “Very cool moment. Knowing that JM has won the only state tournament in Rochester hockey history. They just had a really unbelievable run for a team from a small town like Rochester.” 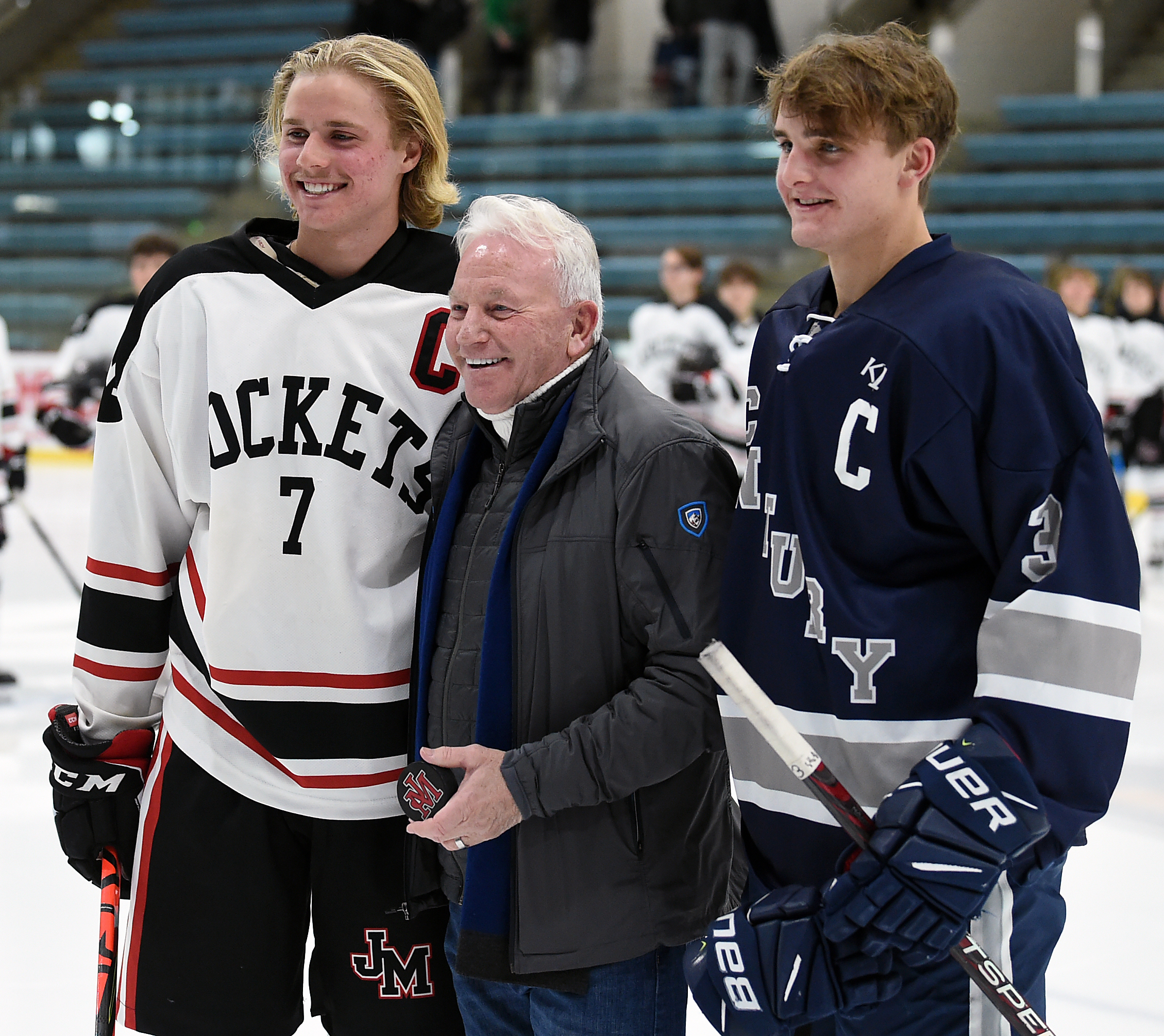