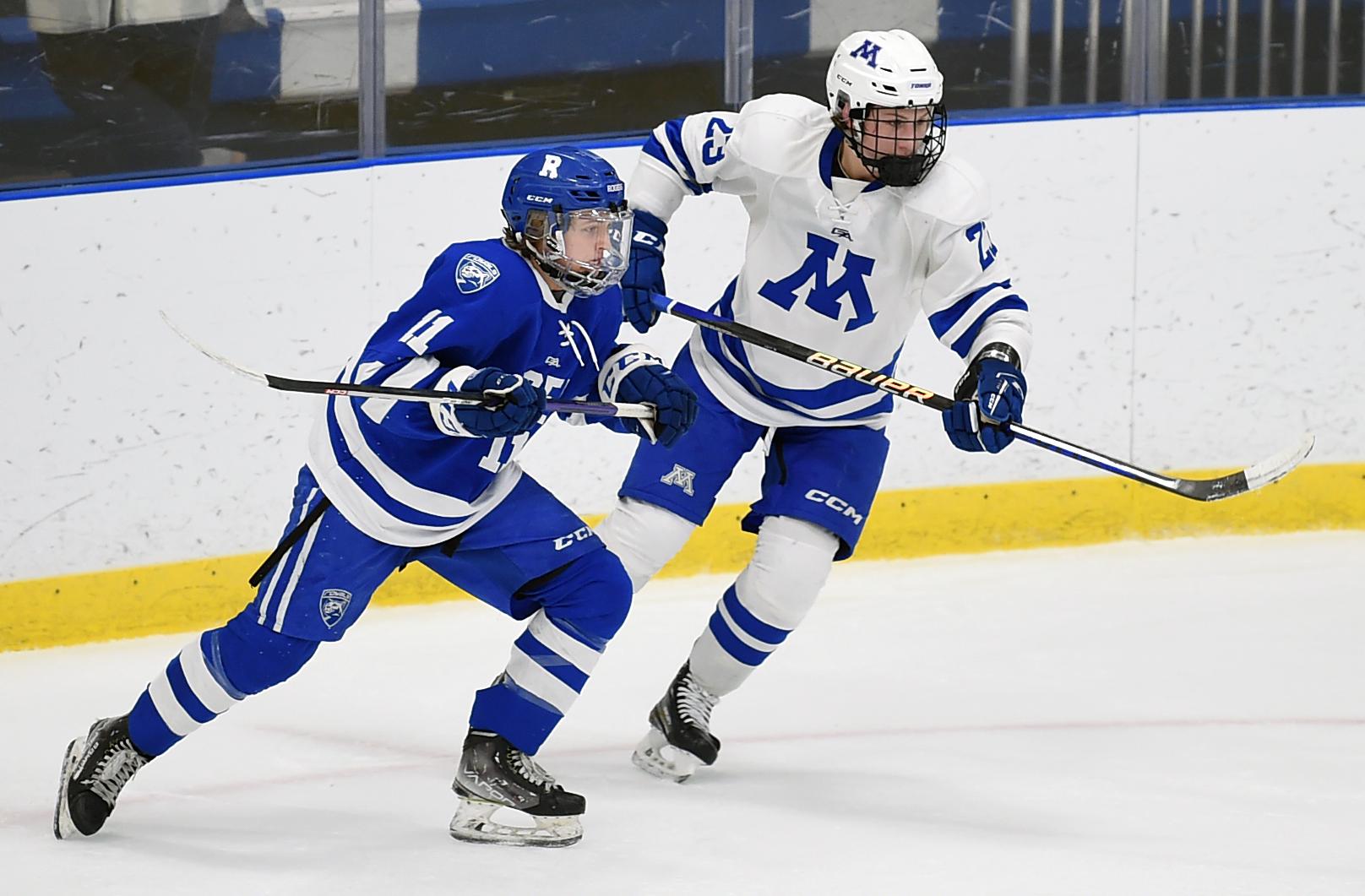 John Stout pulled into the Pagel Activities Center parking lot on Saturday at the exact moment as Liam Hupka.

So, as luck would have it, they were side by side — just the way Minnetonka’s top defenseman duo likes it.

“We always joke that we always want to be in tandem, we always want to be together,” said Hupka, a senior. “Even when we are walking out of school, we will make sure we are in synch with each other. He’s my left hand man (Stout, as a left-hander, plays the left side and Hupka the right).”

Saturday’s unplanned parking lot choreography spilled over into the No. 3-2A Skippers’ much-anticipated showdown with No. 1-2A Rogers. Stout and Hupka played prominent roles as Minnetonka (7-1-0) beat Rogers 5-0, handing the Royals (6-1-0) their first loss.

Rogers, which possesses one of the state’s most potent offenses, managed just three shots in the first and one in the second as Minnetonka built a 4-0 lead.

Stout, who has committed to play at Minnesota-Duluth, had an assist on Ashton Schultz’s shorthanded goal with 7 seconds left in the second period. Hupka, described by Minnetonka coach Sean Goldsworthy as one of the state’s most underrated players, was a force on both the power-play and penalty killing units.

“He doesn’t cheat anything, he plays an honest game and he’s really effective,” Goldsworthy said about Hupka. “And he kind of carries our special teams, which was pretty evident tonight.”

Stout and Hupka’s brutally efficient effectiveness is reminiscent of some other standout Skippers’ D tandems. Josh Luedtke and Grant Docter were fabulous in 2017-18 as Minnetonka won its lone state championship. Andrew Prochno and Justin Holl, from the Skippers’ 2010 state tournament runner-up team, were also a dynamite duo.

Stout has three goals among his 10 points this season. Hupka has five points, and both his goals have come on the power play.

“John and Liam have been playing well together, they’ve been pretty solid,” Goldsworthy said. “But to put them in the same category as some of those guys who have been there and done it, I think it’s a little early. But I think they are tracking in the right direction together.”

Together is the operative word. The best buddies made something of a scene early in the Upper Midwest High School Elite League this fall when, playing for opposite teams, they found themselves tangled in front of the net.

Late in Saturday’s game, with Minnetonka comfortably ahead, the pair passed the puck back and forth numerous times before finally initiating a breakout out of their end.

Said Hupka: “Just killing time. If they’re not going to forecheck us, we might as well keep on giving it back and forth.”

Added Stout: “We were just trying to see how many we could get in a row. I think we got to eight.” 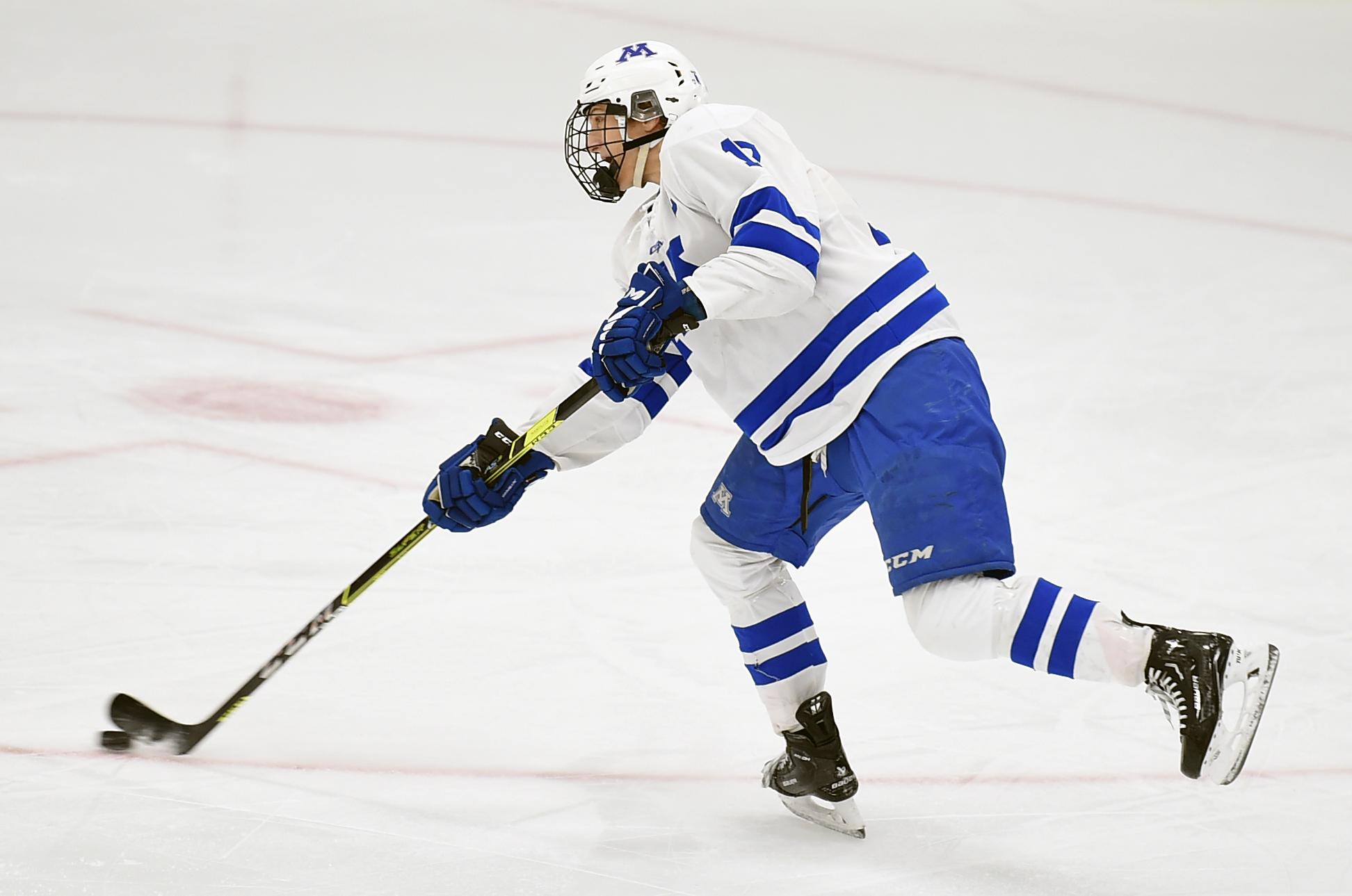 Minnetonka senior Liam Hupka fires a pass out of the defensive zone during Saturday's 5-0 victory over Rogers. Photo by Loren Nelson, LegacyHockeyPhotography