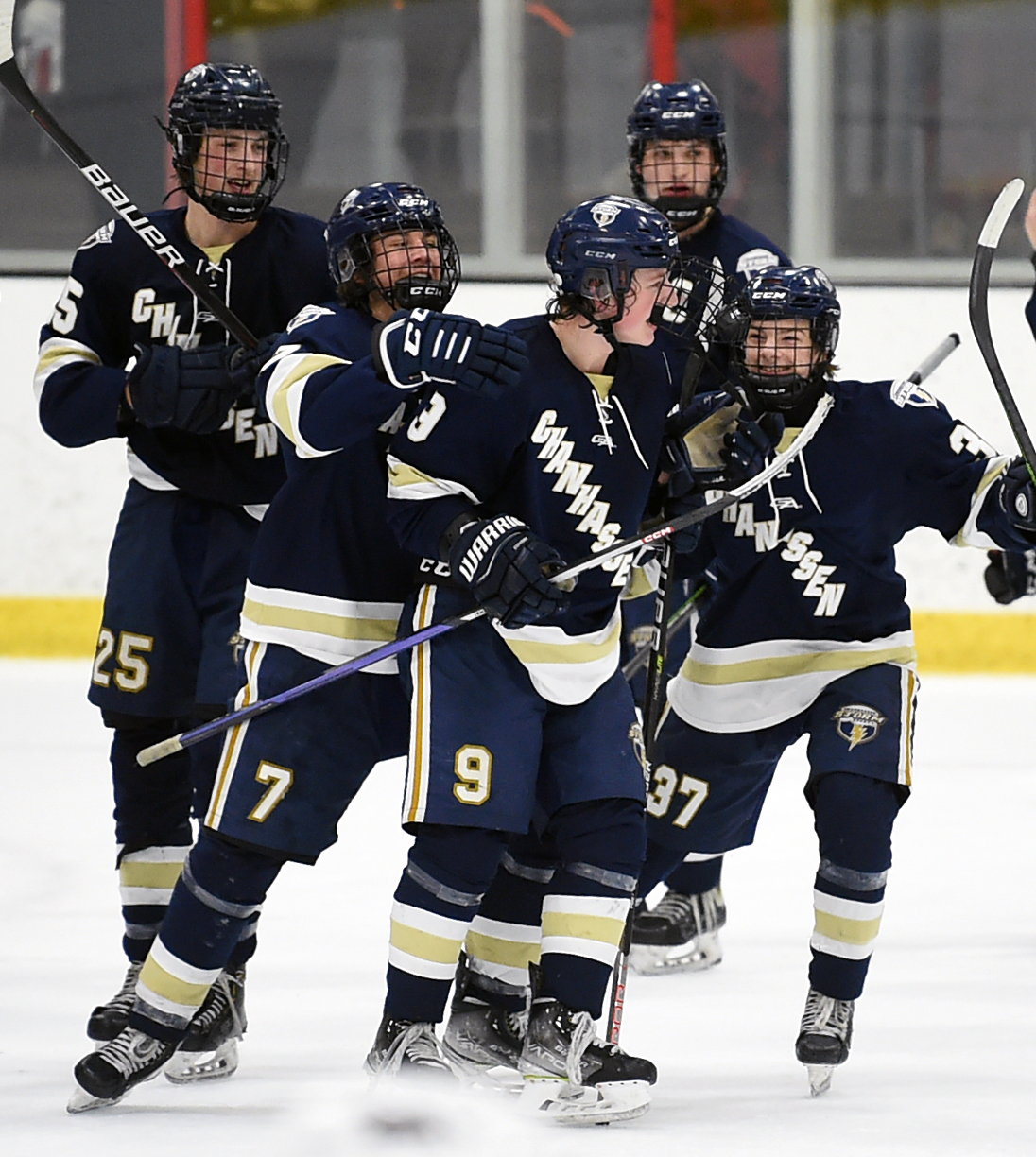 Chanhassen's Jack Christ (9) is mobbed by teammates after scoring in overtime against Shakopee on Friday. Photo by Loren Nelson, LegacyHockeyPhotography.com

And by enough, we mean they almost ripped off Christ’s face (OK, facemask) during the height of celebratory madness after Christ’s overtime goal gave Chanhassen a 3-2 victory over Shakopee on Friday at the Shakopee Ice Arena.

The goal, which came off a feed from onrushing Caden Lee, was Christ’s second of the game and gave the No. 7-2A Storm (6-1-0) a third victory over a Section 2AA opponent in as many tries this season. That Chanhassen, which has never won a playoff game or previously been ranked among the state’s top 10 in Class 2A, is tracking toward the No. 1 seed in one of the state’s most loaded sections is certainly a cause for joy — or overjoy, in terms of Christ’s health — for the Storm.

“I feel like we should be the No. 1 seed, especially if we take care of Prior Lake when we play them in a days,” said Christ, a junior who shares the team lead with six goals. “I feel like if we beat everyone in our section we should get the (No.) 1 seed.”

Last week, Chanhassen beat arch rival Chaska 4-0, the Storm’s first victory over the Hawks in 13 tries. As an encore, they knocked off then-No. 1 Minnetonka 4-1. Both Chaska and Minnetonka are Section 2AA rivals, as is Shakopee, which beat the Storm 3-0 (two empty net goals) last season.

The No. 19-2A Sabres (2-2-0), whose starting lineup consisted of mostly freshmen and sophomores, are a lot like Chanhassen in that they in the midst of building a winning program out of one that has had little postseason success in recent history. The Storm, a junior-dominated team, took its lumps as its current uber-talented group has matured.

“They have a bunch of little scrappy kids out there,” said Christ, whose winning goal came 2:26 into overtime, said about the Sabres. “They are definitely good. That was like us a few years ago.”

Chanhassen’s next two games are against section foes — Saturday against Bloomington Jefferson and Thursday against defending section champion Prior Lake. The Storm don’t play Eden Prairie or Holy Family, both of which are ranked in the top 20 in Class 2A. Shakopee beat Holy Family 3-2 on Dec. 1.

“We look at every section game, whether it’s a rivalry game or not, of equal importance,” said Chanhassen coach Sean Bloomfield. “It’s a tough section. You are going to have to beat two or three good teams no matter where you are seeded. But being able to be that high seed gives you a little bit of an edge.”