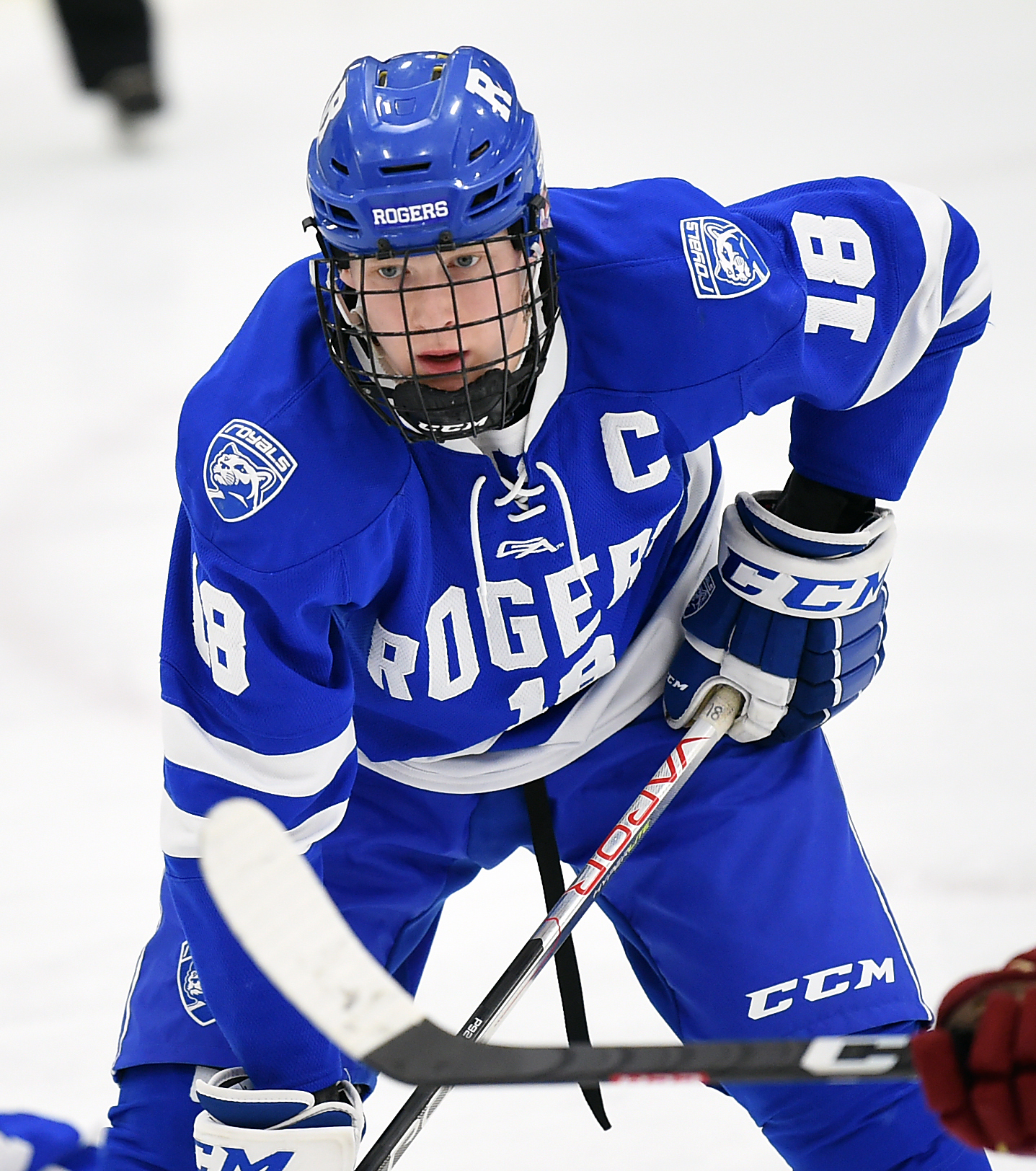 Chase Cheslock spurned opportunities to play elsewhere this season, instead returning to Rogers in hopes of helping lead the Royals to their first state tournament berth. Photo by Loren Nelson, LegacyHockeyPhotography.com

Sam Ranallo could have played elsewhere this season. Same goes from Chase Cheslock. And Cade Chapman, too. Options were abundant for pretty much every player in Rogers’ lineup.

Junior league teams covet high-caliber high schoolers. And the Royals, who have ascended to No. 1 in Legacy Hockey’s Class 2A Power Rankings, have a roster loaded with next-level talent.

But skipping senior year, abandoning childhood buddies, giving up on a lifelong dream of playing in the state tournament … none of it made sense to Ranallo, Cheslock and Co.

“Being able to play with your best friends is something that you don't get to do forever,” said Ranallo, a senior who spent the lead-up to the high school season playing for the Youngstown Phantoms of the USHL. “And we didn't feel it was gonna make or break our hockey career.”

Ranallo has four goals and three assists in five games for unbeaten Rogers (5-0-0). Two of those victories are over heavyweights Lakeville South and Andover, state Class 2A tournament qualifiers last season. In the win over Lakeville South, Ranallo and Cheslock were particularly pumped up in the closing minutes.

“We've been trying to knock down walls for four years," fourth-year Rogers coach David Brown said after the win over the Cougars. "This is another huge wall we knocked down today."

Rogers has never reached the state tournament, a factoid Royals players have seared into their collective psyche.

“The state tournament is something you dream about as a little kid, and to bring the first one to our program would be huge,” said Cheslock, a senior defenseman who played 18 games for the St. Cloud Norsemen of the NAHL this fall. “And, I mean, that's just been a dream. And me and Sam both thought, that's the best way to do it. Come back, do it for your hometown and do it for the guys in the locker room. That’s something special.”

Rogers reached the Section 5AA title game last season, losing a 4-2 thriller to Maple Grove. The Royals returned most of their top players from last season, including Chapman, a senior, in goal, and buttressed their lineup with the addition of a group of standout sophomores, including high-scoring forwards Parker Deschene (six points) and Mason Jenson (five points).

Brown said the decision by Ranallo and Cheslock, among others, to return for their senior seasons will have a huge impact on the program.

“It’s a game changer,” he said. “It's going to make kids fall in love with the game. It's going to grow the program. It’s going to give a lot of people that put in a lot of work an unbelievable experience and journey this season.”

For the moment, Rogers, Wayzata and Minnetonka appear to have separated themselves from the pack to form an early-season Big Three.

Rogers plays at Minnetonka (5-1-0) on Saturday in a huge showdown.

Wayzata (5-0-0) has played the toughest schedule of the three, and the Trojans face another heavy hitter in their only game this week, a Saturday showdown at defending state Class 2A champion Andover.

Most all of the top teams, including No. 1 Hermantown and No. 2 Warroad, avoided losses last week. So there was little movement among the top 10, other than winless Alexandria dropping all the way to No. 15.

One of the few big surprises was Providence Academy losing to previously unranked Hutchinson. We kept the Lions, dominant in their victories this season, at No. 6 but moved Hutchinson all the way up to No. 13.