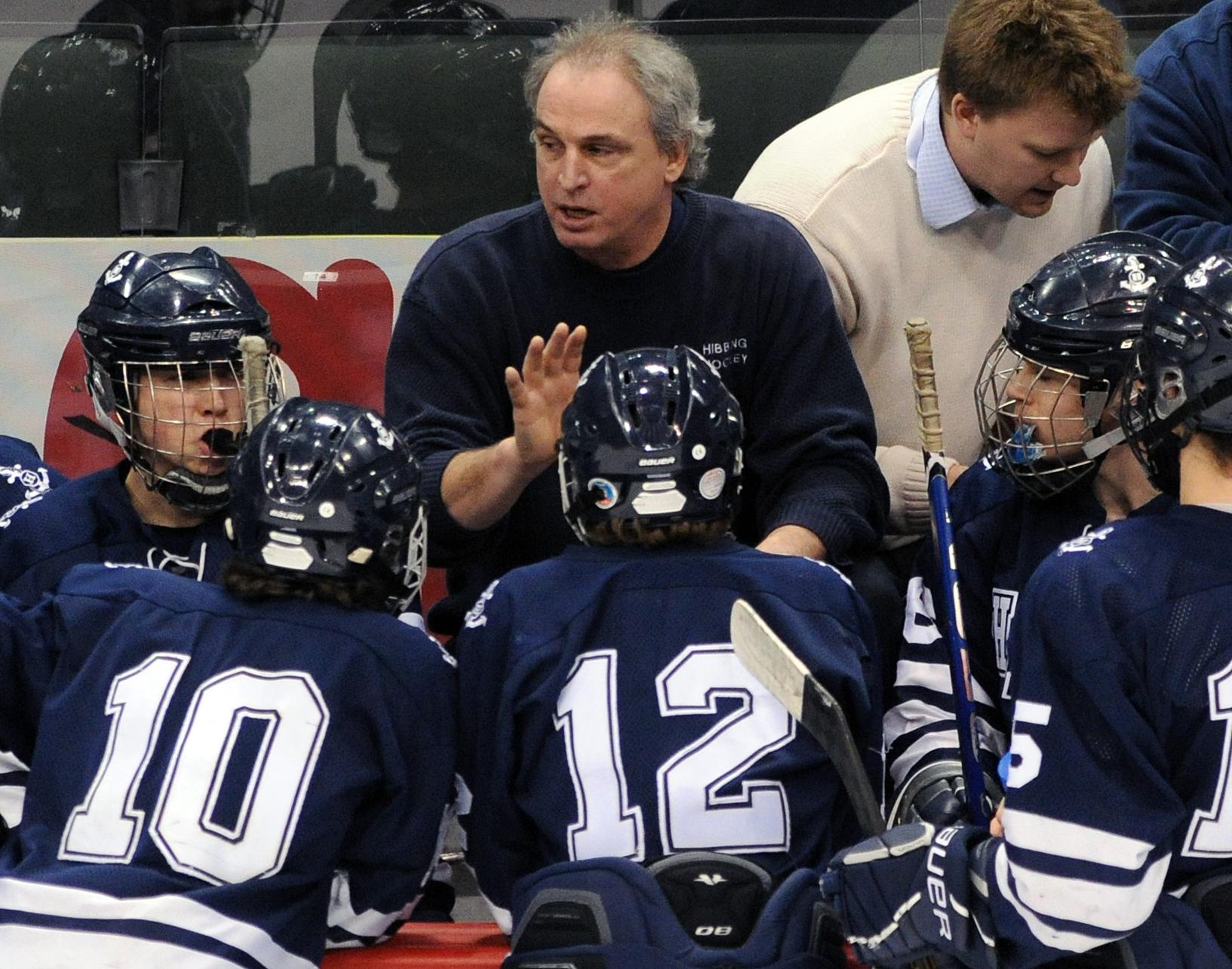 Mark DeCenzo was just a few years out of college and already had settled into what he saw as a comfortable career path. A to-the-bone hockey guy and teacher who had found a home behind the bench for Apple Valley’s high school team, DeCenzo didn’t see himself as head coaching material.

A trusted assistant? For sure. THE guy leading a program? Nah, not really my style, DeCenzo thought.

“I never had aspirations of being a head coach,” said DeCenzo, who is being honored this weekend by the Minnesota Hockey Coaches Association with the Cliff Thompson Award for long-term outstanding contributions to hockey in Minnesota. “I thought being an assistant was more conducive to my personality.”

A chance meeting with Edina coaching legend Willard Ikola coincided with Larry Hendrickson stepping down as Apple Valley’s head coach. Ikola asked DeCenzo about his interest in the job. DeCenzo said he had no desire to be a head coach and, besides, “I wouldn’t even know how to do it.”

Ikola suggested the two go grab a cold beverage. “I’ll tell you everything you need to know,” said Ikola, who amassed more than 600 career victories and won eight state championships while wearing his trademark houndstooth cap. DeCenzo, of course, jumped at the chance to learn Ikola’s secrets to success.

DeCenzo, who spent the early part of his childhood growing up in Eveleth, had expected to hear something much more complex and compelling from his fellow Eveleth native. While he may have felt shortchanged at the time, DeCenzo came to appreciate Ikola’s wisdom — and brevity.

“The longer I coached, the more I realized that what he said was right,” DeCenzo said. “There’s really not that much more to it.”

DeCenzo took that open Apple Valley position and guided the Eagles for 10 seasons. They reached the state tournament in 1992 and 1993, his final two years.

“He had so much passion for hockey and the kids,” Hendrickson, who passed away in 2018, said about his protege DeCenzo in a 2015 article. “He could be tough on them, don’t get me wrong, but that’s part of hockey. He was tough, but he was never ever mean to them. I never saw him not be great with kids. No question, I could just see he was going to be a head coach.”

DeCenzo left Apple Valley for Hibbing and a return to his Iron Range roots. He guided the Bluejackets for 19 seasons, leading them to the state tournament four times, including a runner-up Class 1A finish in 1994. While in Hibbing, he won the John Mariucci Award given to the coaches of the year in Class A and AA in 1997 (Class AA) and 2011 (Class A). DeCenzo guided Hibbing to 12 section final appearances.

He retired from coaching in 2013 and was inducted into the MHCA’s Hall of Fame in 2015.

Among the hundreds of standout players DeCenzo coached, Apple Valley’s Brad DeFauw and Hibbing’s Adam Johnson were among the best. Both reached the NHL.

A star high school player himself in Grand Rapids after his family moved from Evelelth, DeCenzo forged lasting friendships with many of the coaches he went toe-to-toe with each winter.

“We got to know each other through the coaches association, that’s where the friendship really came from,” said Steve Wasko, who coached at Two Harbors during much of DeCenzo’s time at Hibbing. “We shared a lot of ideas. In the hockey coaching fraternity, there really aren’t any secrets. We weren’t inventing the wheel, we weren’t even reinventing the wheel. We’d say, ‘I’ll tell you what we’re going do and you try to stop me.’ ”

DeCenzo agreed to play Two Harbors, even though the Bluejackets’ program was humming along at a much higher level. DeCenzo figured it was only right that he put smaller programs on his schedule, just as big-school teams such as Moorhead and Minnetonka did with Hibbing.

“A lot of people in the community didn’t look too fondly on us playing Two Harbors,” DeCenzo said.

The grumbling only got louder after the teams met for the first time … and Two Harbors won in overtime.

“I apologized to him in the handshake line after the game,” Wasko said.

Like Wasko, Virginia coach Keith Hendrickson developed a deep respect for DeCenzo. No matter how heated the rivalry between Hibbing and Virginia became, the friendship between DeCenzo and Hendrickson never suffered.

“He’s highly competitive like me, but when the game was done, it was done,” said Hendrickson, who retired from coaching at about the same time as DeCenzo. “We drove together to a few different Minnesota Hockey events. He was just really down to earth, funny and just fun to be around him. There was never an arrogance, never an ego; just a lot of passion.”

DeCenzo shared his passion with other coaches. Lots of them. Guys like Greenway’s Pat Guyer, Eveleth’s Craig Homola, Cloquet’s Dave Esse and Rochester Mayo’s Lorne Grosso. DeCenzo enjoyed the storytelling and kinship as much as any part of coaching.

“The fun thing about those guys wasn’t just the camaraderie,” said DeCenzo, whose circle of coaching friends also included Roseau’s Scott Oliver and Brainerd’s Pat Forte. “You had to coach. You could go play against them and have more talent but know they were going to give you a great game.”