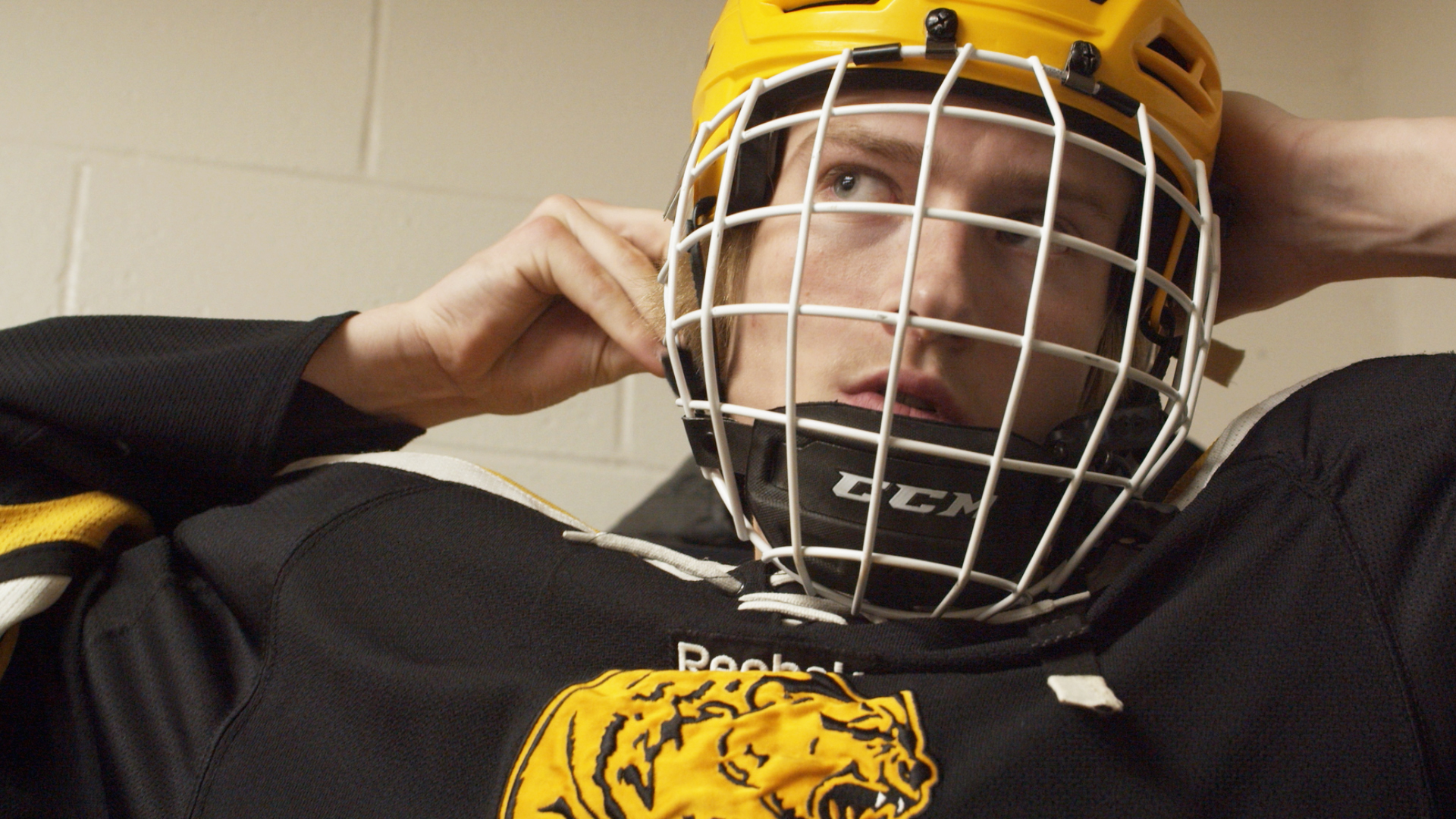 Eveleth's Elliott Van Orsdel is one of the main characters in the documentary film Hockeyland. Courtesy photo

Tommy Haines was bouncing from one Iron Range arena to another, looking for something but unsure of exactly what he was hoping to find. Then he walked into an Eveleth Hippodrome locker room and saw a shaggy haired player by the name of Elliott Van Orsdel doubling as a drill sergeant.

“First thing I see is this mop-topped kid,” Haines said. “I mean, he had the perfect hockey player’s hair. And he’s instructing the whole team, telling them where to go on the ice and what they should do. I hadn’t seen a kid take over the locker room like that.”

At that moment Haines, director of the documentary film "Hockeyland," knew he had discovered his leading man. Well, one of them, anyway.

Haines’ test shoot that night also included camera time with Hermantown, the Golden Bears’ opponent. Haines met former Hawks star Blake Biondi, who talked about his goal of one day playing in the NHL, and coach Pat Andrews, himself a former Hermantown star whose passion for the program is such that he bleeds Hawks blue and gold.

“It was the winter before we did the actual filming,” Haines said. “I walked out of there and said ‘Let’s go. Let’s start filming next year.’ It was a pretty magical night.”

The film follows Hermantown and Eveleth during the 2019-20 season, depicting the real-life exploits of Van Orsdel, Biondi, Andrews and the rest of the “cast.” It documents the teams’ two meetings that season and culminates with Hermantown’s appearance in the 2020 state championship game. Think high school football’s "Friday Night Lights" meets high school basketball’s "Hoosiers," only minus the fiction. And colder. Much, much colder.

The movie opens in 63 theaters around the state starting Friday and releases in 135 theaters nationwide the following week. See the full schedule here.

Van Orsdel, who is attending college at the University of Southern Maine, was on board with the concept of the movie from the start.

“They were going for that fly on the wall look into not just my life but the culture of high school hockey in northern Minnesota,” he said. “I thought it was a pretty cool idea.

“It’s tough to put an entire lifestyle and culture, tough to put that in an hour-and-a-half movie,” Van Orsdel said. “That could be a five-hour movie, or a TV show. I thought they did a great job with it.”

Much of the footage was captured off the ice, in players’ houses, in their vehicles and in and around their hometowns. Van Orsdel remembers the first time he gave a camera crew the green light to follow him home from practice, catching his family a bit off guard.

“The next thing I know I have four cameras in the house and my mom’s in a robe.” Van Orsdel said. “She asked if she could put some clothes on and a few dishes away. Tommy and the guys made my family very comfortable. The accommodated for us, they didn’t cross the line.”

Both Andrews and Van Orsdel said there were many, many moments during filming in which they said or did something and thought to themselves, I hope that doesn’t make it into the movie.

“I was constantly thinking about that,” Andrews said. “Tommy could have skewered me. You are miked up sometimes for 10 hours at a time. That’s your own dialogue coming out, especially in a competitive environment.

“He would say, ‘That really wasn’t bad, coach. That was fine.’ It was a standing joke.”

The most poignant moments in the film come from Van Orsdel’s family interactions and Andrews sharing the role his father, who died of lung cancer in 1995, played in his life.

“It was a little surreal and a little nerve-racking, just putting yourself and your team out there, in particular your team,” Andrews said. “I didn’t want to put them in a spot that would make them feel bad.”

Added Van Orsdel: “I’d been in and out of trouble quite a bit growing up, so the last thing you want as parents probably is a camera on me 15 hours a day. But my parents were so supportive of me and the movie.”

Haines described Van Orsdel and Andrews as “the heart” of the film.

“For the amount of hours of filming we did with Pat and Elliott, I can’t imagine the amount of trust they must have had in us,” said Haines, whose film debut "Pond Hockey" was met with critical acclaim. “But that’s part of it, that chemistry. We could just tell both Pat and Elliott were a good fit right away.” 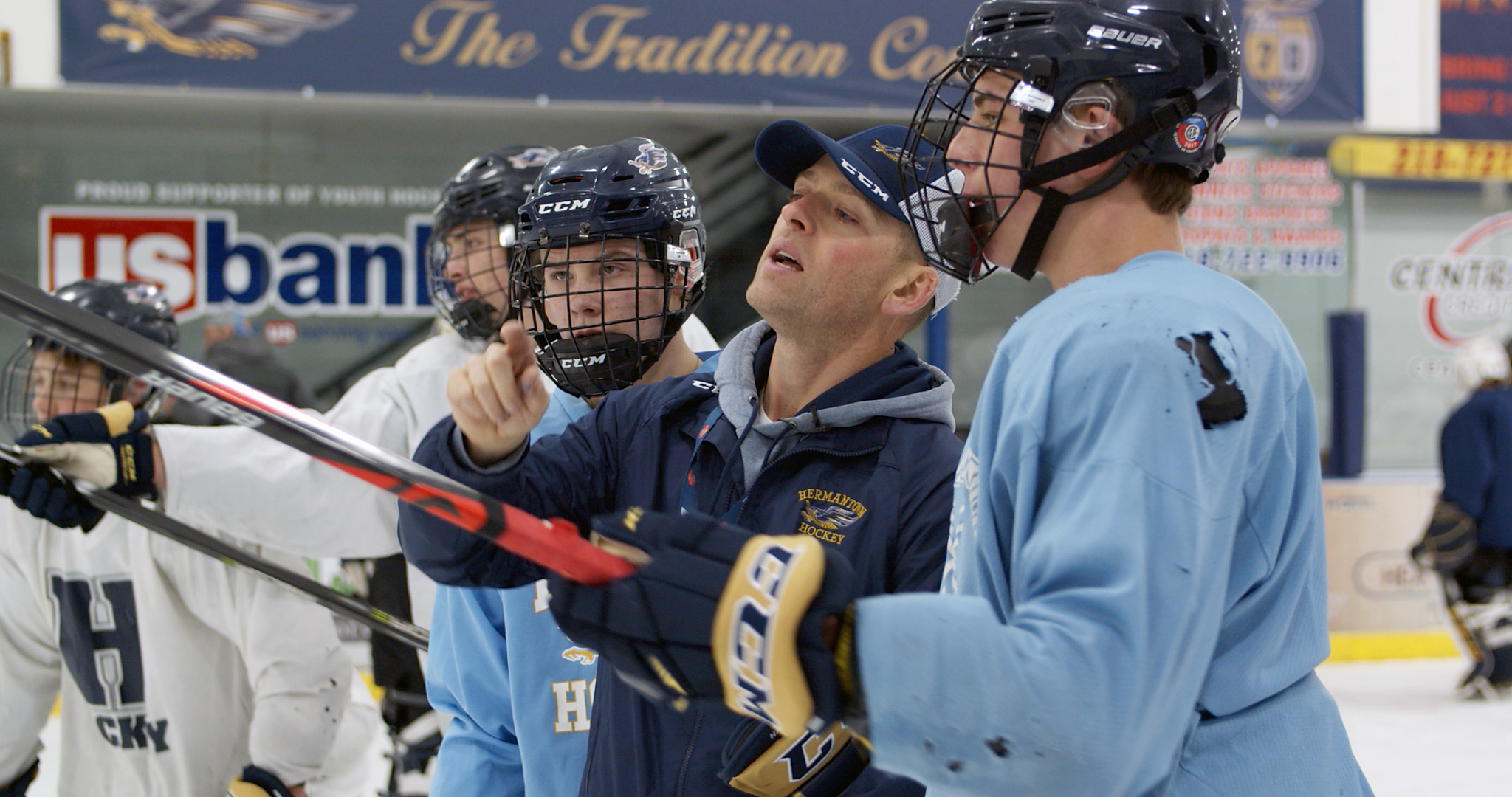 Hermantown coach Pat Andrews works with his players during the filming of the documentary "Hockeyland." Courtesy photo