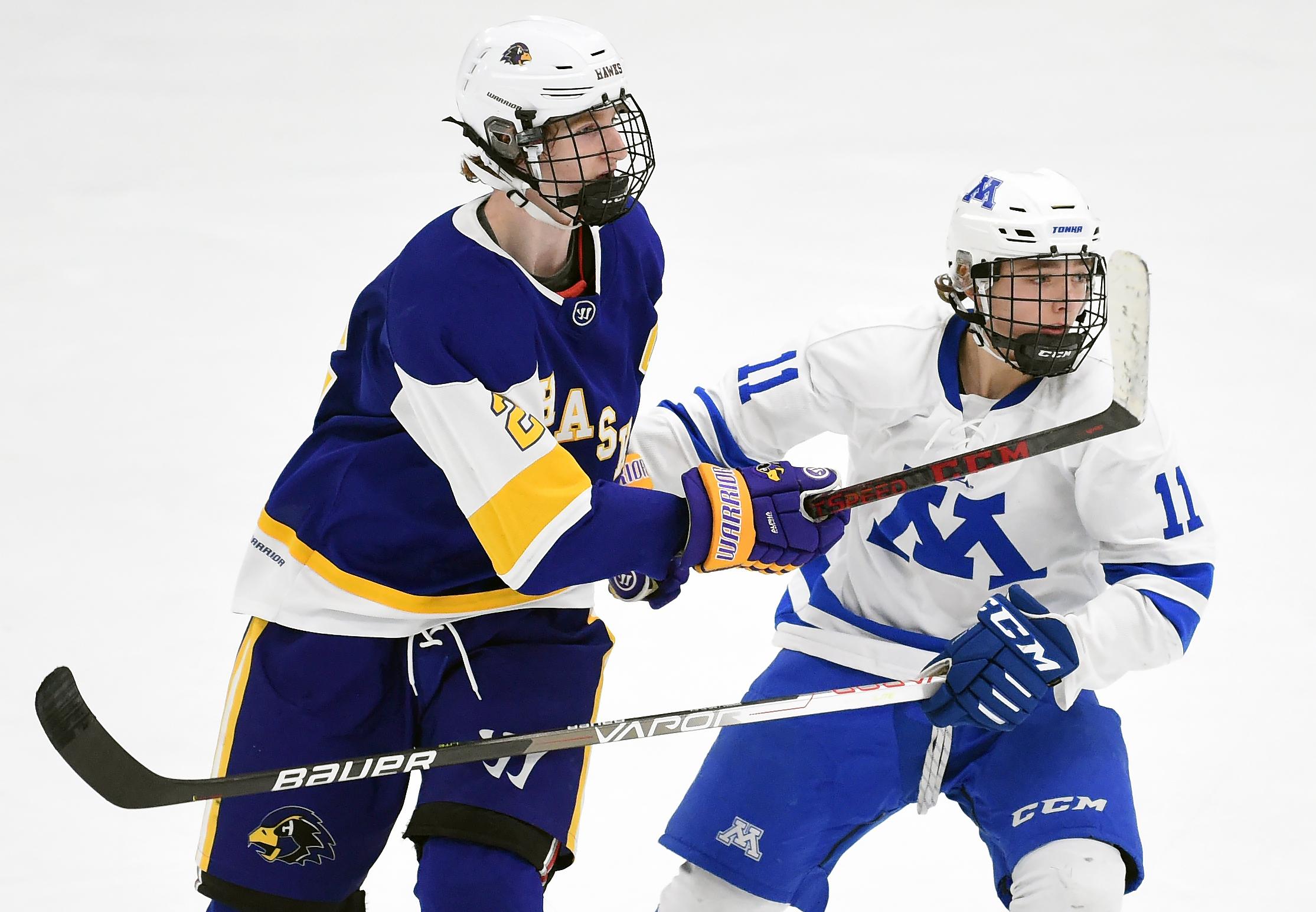 Chaska defenseman Sam Rinzel, left, could be selected as high as in the first round in the 2022 NHL Draft. Photo by Loren Nelson, LegacyHockeyPhotography.com

Alas, the Chaska defenseman is a mere mortal. Albeit one with a hockey skill set that has caught the attention of NHL scouts and mock drafters alike.

The 6-foot-4, 180-pound Rinzel, a smooth-skating, puck-rushing defenseman who scored 10 goals among his 38 points for the Hawks in 2021-22 as a junior, figures to be the first player from last season’s Minnesota high school ranks selected in the NHL Draft that begins at 6 p.m. today in Montreal.

Rinzel, coming off an outstanding high school season, ascended to No. 19 among North American skaters in NHL Central Scouting’s final rankings and is projected by several media outlets to be picked late in the first round. The Athletic, Bleacher Report and NHL.com all have Rinzel going to the Arizona Coyotes. TSN’s mock draft has the St. Louis Blues picking Rinzel at No. 23.

Minnesota high school defensemen have been popular early picks in recent NHL drafts. Last year, Jack Peart of Grand Rapids was selected in the second round, 54th overall, by the Minnesota Wild. Edina’s Jake Boltmann went in the third round, 80th overall, to the Calgary Flames in 2020. One pick later Andover’s Wyatt Kaiser was selected by the Chicago Blackhawks.

Joining Rinzel as other Minnesota high school players from last season expected to be selected in the two-day draft include:

All of the projected NHL picks were selected to Legacy Hockey’s 2021-22 All-State team. Bump was named Player of the Year.

Rinzel, who has committed to play for Minnesota, starred for the Waterloo Blackhawks of the USHL this spring after leading Chaska to a section title game appearance during the high school season. He scored two goals and added eight assists in 21 games in Waterloo. Rinzel also spent plenty of time in front of NHL scouts last fall when he played in the Upper Midwest High School Elite League.

Should Rinzel be selected in tonight's opening round he would join Minnesota natives such as Minnetonka’s Jake Gardiner (No. 17 overall by the Anaheim Mighty Ducks in 2008) and Eden Prairie’s Nick Leddy (No. 16 overall by the Minnesota Wild in 2009) who went early in recent drafts while still playing for or having just completed their careers for their high school teams.

Former South St. Paul standout Phil Housley is the standard bearer for Minnesota high school defenseman being selected early in the draft. He was picked No. 6 by the Buffalo Sabres in 1982 and made the jump straight from high school to the pros.

The 2022 NHL Draft, which is being held at Bell Centre in Montreal, begins at 6 p.m. today with Round 1. Rounds 2-7 will start at 10 a.m. Friday. Round 1 will be broadcast on ESPN and Friday’s rounds will be on the NHL Network. The Montreal Canadiens have the first pick in the draft.