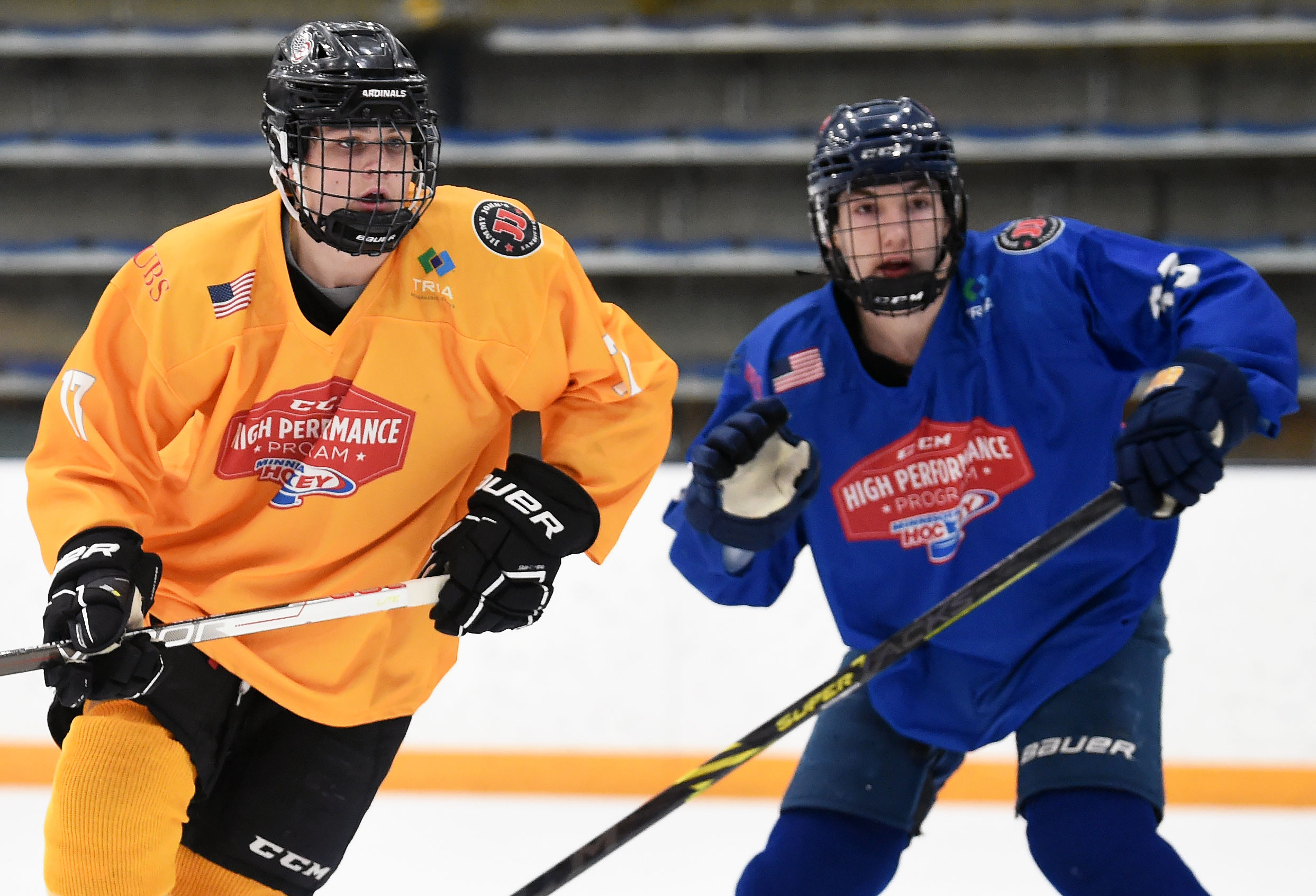 Coon Rapids made headlines and highlight reels in mid-January when, because of a rash of injuries and illness, it was forced to start its fourth-string goaltender against Robbinsdale Armstrong/Cooper.

A month later, the Cardinals were on the verge of an even more astounding feat. Coon Rapids, which hasn’t advanced to a section semifinal in two decades, was leading heavily favored Blaine 4-1 in the second period of a Section 7AA quarterfinal.

“I think Blaine definitely overlooked us, and we took advantage of it,” Coon Rapids coach Aaron Frach said. “But once we got that big lead you could see with our players it was, ‘Oh no, now what do we do?’ ”

Blaine, which defeated Coon Rapids 10-2 early in the regular season, rallied to score five unanswered goals en route to a 6-4 triumph, averting what easily would have been the biggest upset of last season’s state playoffs.

“I think that loss is going to be key for us,” said Frach, who played 12 sophomores on the varsity last season and sees a future filled with extended playoff runs.

Three of those sophomores, goaltender Austin Durkop and forwards Tyler Barsness and Eli Boden, were selected to play for Section 7 in the 17s division of Minnesota Hockey’s Spring Festival last weekend at the Plymouth Ice Center. Durkop and Barsness performed well enough to be chosen to advance to the HP 16 & 17 Final 54 set for this Saturday and Sunday at the same venue.

“I just thought they were all great,” Hermantown’s Pat Andrews, a Section 7 coach along with Frach, said about Coon Rapids’ players. “They worked super hard and they played the game the right way. They forechecked aggressively, backchecked through the middle of the ice and they made the simple play.

“(Durkop) was super athletic and aggressive and he took away the angles.”

For mega-sized programs with rich traditions of sectional and state tournament success, placing two or more players on the three 17s all-star teams is standard operating procedure. For Coon Rapids, it is a groundbreaking feat.

Ernie Vargas, who helped the Cardinals reach the Section 2 title game in 1982 and went on to star at Wisconsin, is one of the few transcendent players the program has produced. And over the years a parade of Cardinals’ top players have transferred to other high schools. Centennial’s A.J. Carls and Gentry Academy’s Reese Shaw among them more recently.

Since Frach’s arrival three seasons ago, player defections have been minimal. Durkop and Barsness are part of a group that seems intent on building on last season’s 10 victories, the most for the program since 2007-08.

Success in Minnesota Hockey’s High Performance setting came as something as a surprise to both Durkop and Barsness, both of whom have been infused with much-needed confidence. Durkop, in particular, was questioning his abilities — and even his joy for the game — after a 4-11-0 season last winter in which he allowed an average of 5.57 goals per game.

“Last season I had an issue with my confidence,” Durkop said. “I started thinking, ‘Oh, wow, am I good enough for this?’ I was facing 50 shots a night and it was tough on me mentally. Honestly, there were points where I didn’t want to go play hockey.

“I’m really glad I stuck with it now.”

Last weekend, Durkop rotated with Dane Callaway, a sophomore who helped lead Hermantown to the state Class 1A championship this spring. Both goaltenders allowed just three goals in their three halves of play, tied for second best in the event, as Section 7 went 2-1-0 and won the consolation championship.

“I was just hoping to make the Spring Festival, anything beyond that was just a bonus for me,” Durkop said. “I actually ended up playing pretty well. To go out there and compete with the best in the state feels great. It’s definitely going to boost my confidence.”

Barsness finished second in scoring for Coon Rapids last season with 30 points, including 16 goals, in 26 games. He had three goals in three games for Section 7 last weekend, including two in the second half of the consolation title game.

“I really wasn’t super confident going into the weekend, but after the first game I saw that I had the potential to make it (to the Final 54),” Barsness said. “I was very surprised how comfortable I felt out there.”

Boden, who posted 25 points for the Cardinals last season, registered a goal and an assist for Section 7.

“He’s fast, shifty and can really distribute the puck,” Frach said. “He’s great on the power power play. And he’s a great kid in the locker room … always smiling. He loves the game.”

Coon Rapids’ sophomores have developed a bond that extends beyond the hockey rink. Many of them live in the same Wexford neighborhood in the north end of the city, just a chip shot from Bunker Hills Golf Club.

“We like all hang out at school,” Barsness said. “We’re together all year-round. It’s not like we only see each other when hockey season starts. Ever since Mites we’ve had a good group and we’ve kind of stuck together.”

Added Durkop: “The team is really a family. We can be around each other all day every day and we don’t get tired of each other.”

Both Durkop and Barsness believe last season’s playoff matchup with Blaine can serve as a springboard for future success.

“That was one of the most fun games I’ve ever been to,” said Durkop, who watched from the bench with a hip injury. “That atmosphere was just amazing. I lost my voice from yelling so much. Our confidence after that game went way up. It made us realize how we can compete with these higher level teams.”

Frach, one of three Delano alums leading state boys’ hockey programs, has installed a system that focuses on mastering the defensive zone first and emphasizes grit and tenacity. He’s also created a culture that makes suiting up for the Cardinals’ varsity something of a coveted achievement. The team has new jerseys with an old-school bird’s wing emblem similar to that of the NHL’s Detroit Red Wings.

One of the team’s mottos aimed at new players aspiring to make the varsity and wear its exclusive gear is to “Earn Your Wings.” That’s right, there’s element of pride in playing for Coon Rapids.

“You have to do some things to earn your wings,” Barsness said. “Not everyone gets to wear the hats or wear the jerseys.” 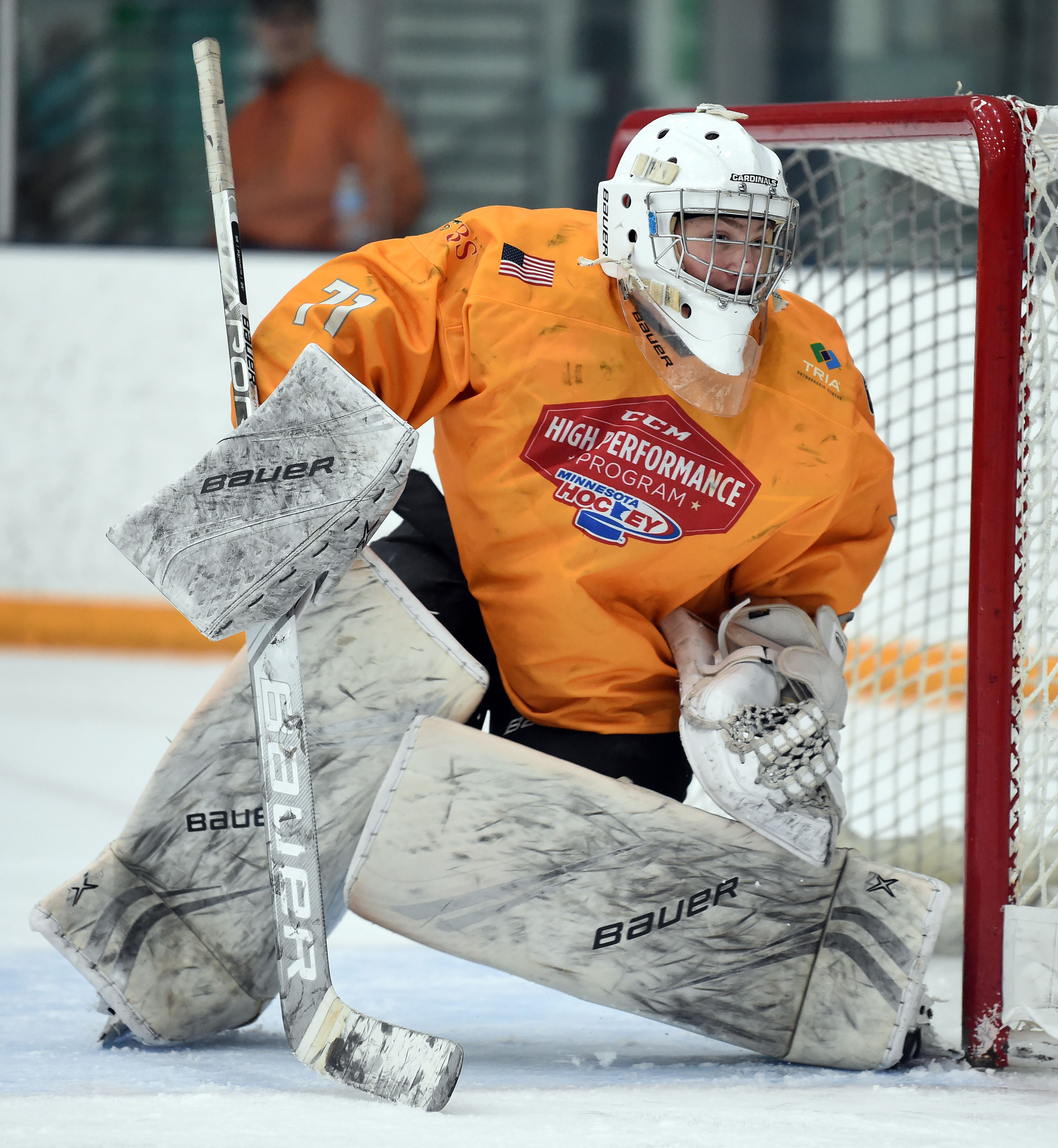