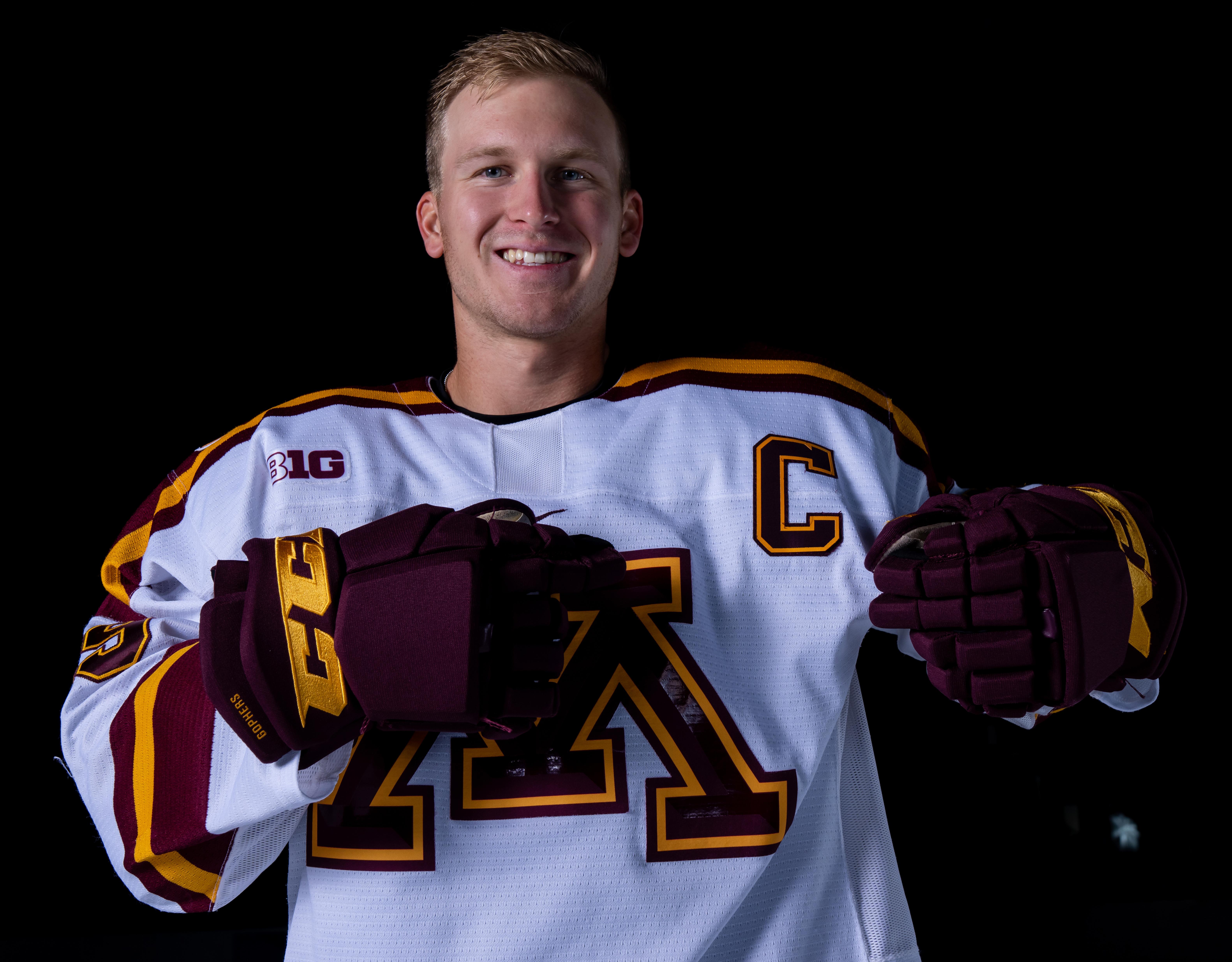 Junior forward Ben Meyers, one of three finalists for the Hobey Baker Award, leads the Gophers with 41 points. Photo courtesy of the University of Minnesota

As the accolades pile up for Ben Meyers, so do the nicknames.

Captain America works wonderfully for the junior who wears the “C” for the University of Minnesota and represented Team USA at the most recent Winter Olympics.

The Delano Destroyer isn’t a bad fit either, given that the former high school star from the far west metro suburbs has been shredding defenses since he was old enough to skate circles around would-be defenders.

There’s also The Terminator and The Closer. In high school, it was Benny or Boone or Meys (pronounced MISE).

For one, no one remembers the 1960s TV series of the same name starring a young boy’s tame bear. And while Meyers, one of the three finalists for the Hobey Baker Award that goes to college hockey’s top player, possesses the requisite skills to finesse his way to goal after goal and assist after assist (he leads the Gophers with 41 points), he isn’t opposed to taking a sledgehammer approach if required. Which is to say there isn’t a hint of gentleness to Meyers’ game.

Andover coach Mark Manney remembers a 2016 spring Minnesota Hockey High Performance event in which Meyers, who had just completed his junior season at Delano, was suiting up for Manney’s Minnesota HP 18s squad against teams from Michigan, Wisconsin and North Dakota. It was a typical all-star event, meaning defense and checking were considered optional by many of the players.

Meyers, who leads Minnesota against Minnesota State in a Frozen Four semifinal at 7:30 tonight in Boston, was not in that group.

“I remember he was the best player on the team,” Manney said. “And he had a nasty streak. He would go into the corners and just annihilate guys.”

Meyers, joined by ultra-talented linemates John Keranaen and Brian Halonen, was even more dominant the following high school season when he scored 120 points — tied with Roseau’s Neal Broten for the fifth most in state history. Delano went 21-3-1 in the regular season and led the state with 168 goals, 25 more than the next highest total of 143 posted by Hermantown.

Meyers served as the catalyst, igniting the offense with his rare combination of grit, determination, skill and savvy. 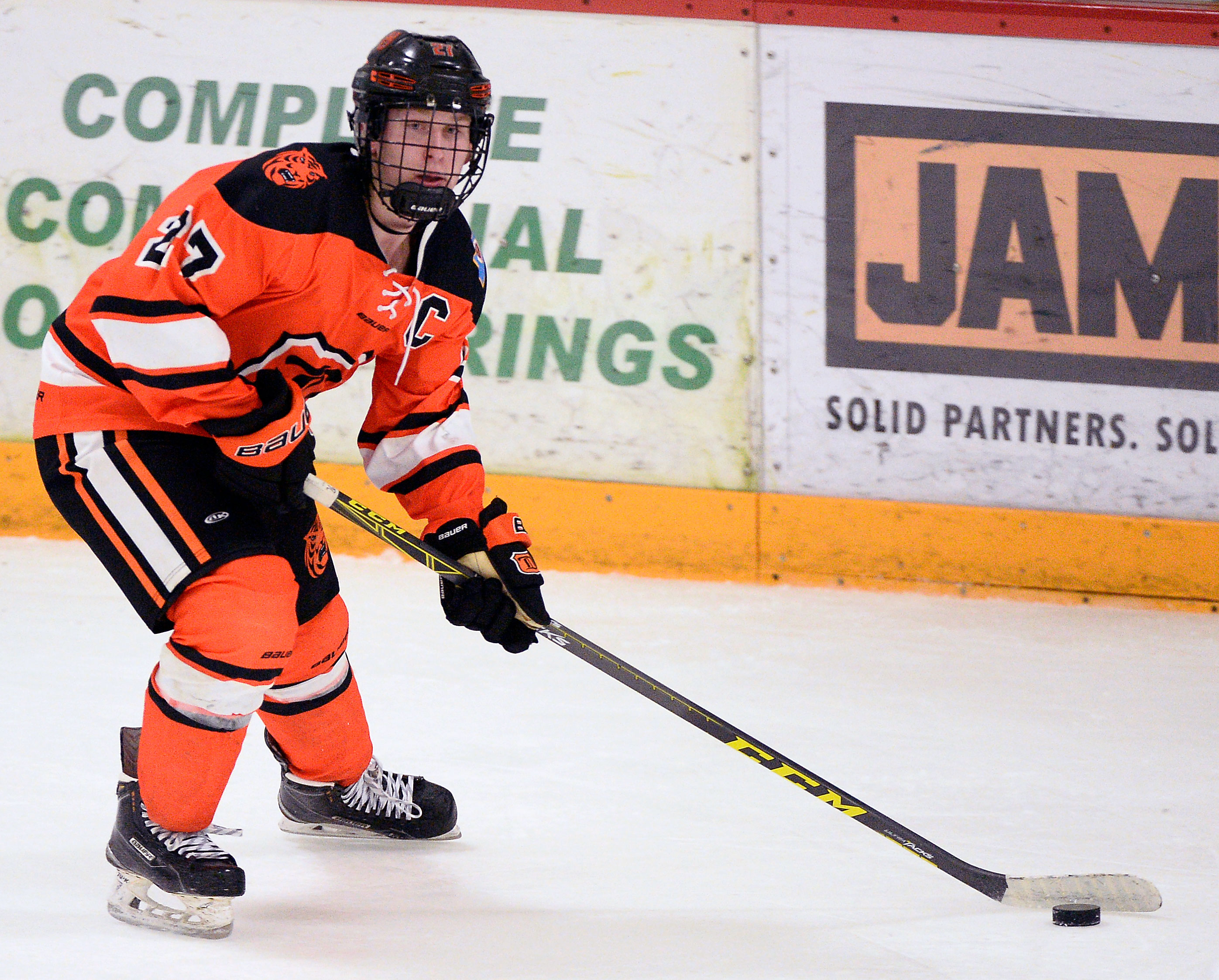 “He could play the skill game and he could play the tough game,” said former Holy Family coach Noel Rahn, whose Fire handed the Tigers two of their regular-season losses. “That’s the part that would surprise people, how strong he was and how tough he was. He had a lot of heart and a lot of passion and was really strong on the puck; really strong.”

The Tigers started the season with seven-straight wins — five of them by six or more goals — despite some self-inflicted wounds caused by a scheme-gone-awry involving hair dye, sweat, wispy mustaches and unbearable pain.

“Not a lot of us could grow a lot of facial hair,” said Ray Heikkila, a senior defenseman in 2016-17. “There were a few guys on our team that tried to force mustaches at the beginning of the season. We said we aren’t shaving these until we lose.”

As the plan was hatched, it was agreed that mustaches would be dyed black so they could be seen better. This is where the plot, in which Meyers was a full participant, fell apart.

“Guys were coming into the locker room between periods all sweaty, the dye running down their faces and saying it was burning their lips off,” Heikkila said. “And we were winning all our games by big margins and thinking, ‘We might go 20 games before we lose, we can’t keep doing this.’ It became a performance thing.”

In early January, the clean-shaven, Just for Men-free Tigers suffered a humbling 10-1 loss at home against Holy Family, with Meyers scoring the lone Delano goal.

“They got up on us early, and it just snowballed from there,” Heikkila said about the stunning loss.

Two nights later, the Tigers beat Wayzata, the defending state Class 2A champion, 4-3. Halonen had a goal and two assists and Meyers added a goal and an assist.

Steve Brown, one of the architects of Delano’s rise to perennial state Class 1A power, had retired from coaching the Tigers a few years earlier but still was a regular attendee at games as a fan.

“That senior season, when that line was together, oh my gosh, you never knew how many goals they might score,” Brown said. “You would have been a fool as a hockey fan in Delano to not find your way to the rink.”

Delano won its three section playoff games by a combined score of 14-2, including a 2-0 triumph over Breck in the title game. The victory over the Mustangs was a watershed moment for Delano hockey in that it secured the first state tournament appearance in program history.

Breck, state Class 1A champion in 2009 and 2010, had been a dominant force in the section, winning seven of the previous eight titles. The Mustangs haven’t been to the state tournament since, while Delano has made three subsequent appearances.

“Breck was kind of like a Hermantown back then,” Delano coach Gerrit van Bergen said. “They were playing all the best AA teams and beating a lot of them.”

A 3-2 quarterfinal loss to Monticello/Annandale/Maple Lake derailed Delano’s championship hopes. The Tigers rebounded by beating Mahtomedi 8-1 and East Grand Forks 6-3 for the consolation title. Meyers led the state tournament with 11 points. His nine assists are one short of the tourney record of 10 set by Cloquet’s Jamie Langenbrunner in 1993.

The Meyers-Keranen-Halonen trio finished the season with 294 points, one of the highest totals for a forward line in state history. All three went on to play at the Division I level — Keranen recently completed his third season for Army and Halonen a fourth year at Michigan Tech. Halonen, who scored 44 points for Tech, joined Meyers in the initial wave of Hobey Baker finalists and is now playing professionally for the Utica Comets of the AHL.

After high school, Meyers helped the USHL’s Fargo Force to a league playoff title in 2018, the first championship in team history. He's helped transform Gopher hockey from an afterthought to one of the hottest tickets in the state.

“I don’t think it’s an accident that wherever he goes success follows,” van Bergen said. “He has such an unrelenting work ethic and super-high compete level. When your best player is your best teammate, you are going to win a lot of games.”

And, apparently, accrue a lot of nicknames.