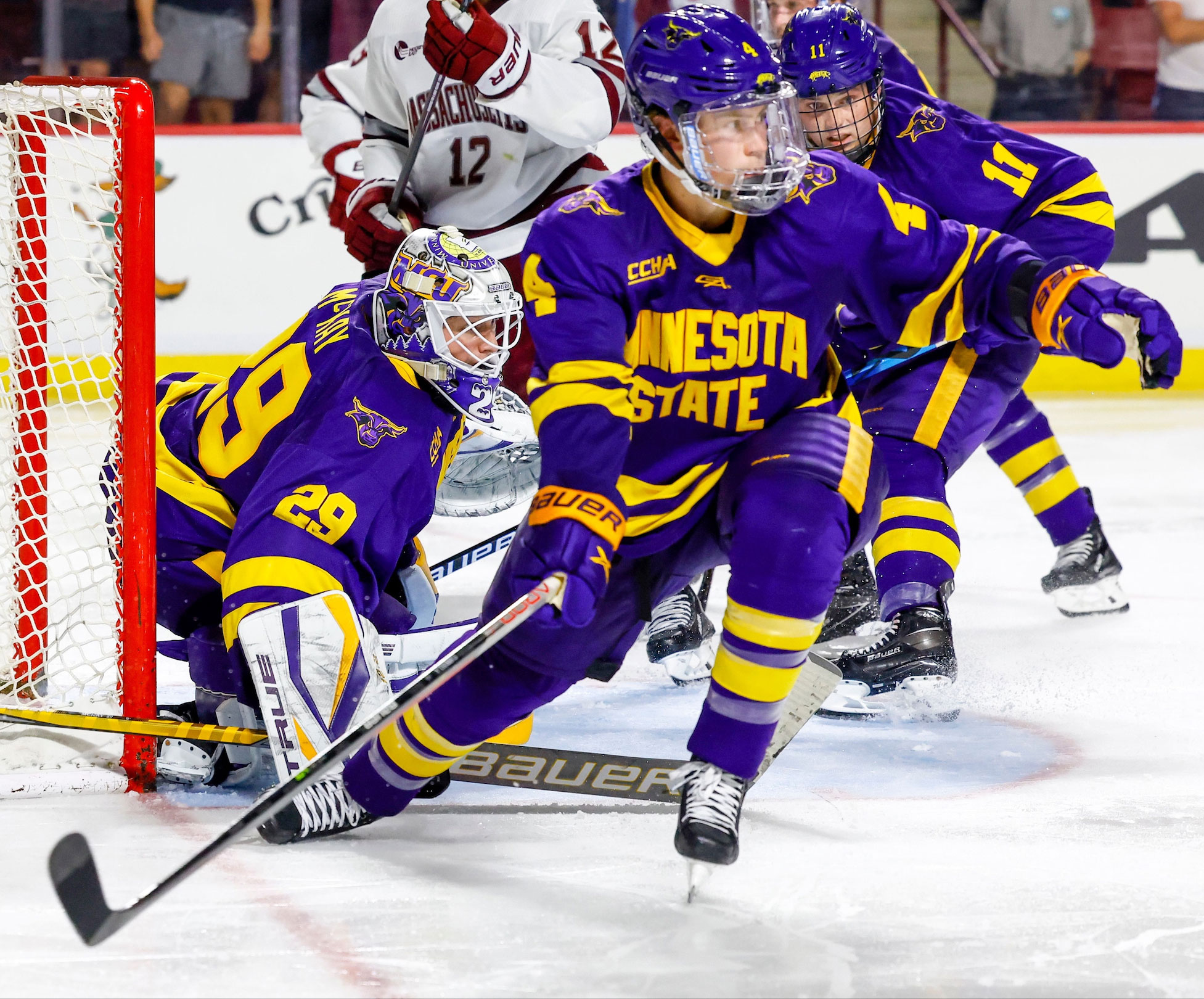 Minnesota State senior Andy Carroll took a long and winding road from his high school playing days at Northfield to becoming a Division I defenseman. Photo courtesy of Minnesota State

As a high schooler Andy Carroll had no business entertaining Division I college hockey dreams. He was, to borrow from the 1990s movie Rudy, “5-foot nothin’, 100 and nothin’.”

And don't forget that Carroll played for Northfield, not exactly a fertile breeding ground for high-level collegiate players. For decades, scouts and recruiters were more likely to stop in town to tour the bank famed outlaw Jesse James once robbed than to catch a Raiders game.

Thing is, once Carroll sets his mind on something, there’s no letting go. That pitbull mentality allowed Carroll to overcome numerous obstacles thrown in his way as he traversed a long, unconventional path to stardom at Minnesota State.

“He had a goal early on, and he figured out a way to get there,” said Todd Carroll, Andy’s father.

Andy was a toddler incapable of even spelling hockey — or any other word — when he developed his insatiable appetite for the game.

“He had a plastic stick in his hand, and he had this little foam ball he would shoot around on the kitchen floor,” Todd said.

Those kitchen shooting sessions quickly evolved into basement mini-games with mom (Carrie) and dad. Come winter, the Carrolls headed outdoors to their backyard rink, first constructed when Andy was the ripe old age of 3.

“He was just totally into it,” Todd said. “He loved it. And he had a great imagination, pretending he was playing for this team or that team.”

For much of his life Minnesota State was the college team for Andy. He was still getting the feel for those tiny skates when he was introduced to Mavericks hockey and, along with it, the joys of licorice and the pressure of eluding a working Zamboni.

Todd was the first coach of the Minnesota State women’s program, guiding the Mavericks for three seasons from 1998-2001 and allowing Andy to develop a taste for some of the trappings of Division I hockey.

“Mom and I would drive down from Northfield, and I would have my skates on after the game,” Andy said in a November Maverick Hockey Live podcast. “Every year it progressed. The first year it was get to the dot from the boards and back to the boards before the Zamboni made it around.”

“She had a keen taste for red licorice,” Carroll said. “And I would always steal a couple from her.”

Andy and Todd were also regulars at Northfield high school games. Andy developed a particular appreciation for former Raiders star Derek Docken, who went on to play four seasons at the University of Alaska-Anchorage from 2011-15.

Docken was something of a trailblazer in terms of Northfield players reaching the Division I level, joining Riley Gill, a goaltender at Western Michigan from 2006-10 and Jake Enebak, who played at the University of Minnesota from 1987-91.

“I literally remember the day he called me and said he had signed with Mankato,” Northfield coach Mike Luckraft said about Carroll. “The tone of his voice was like, ‘I did it.’ ”

Carroll's membership in that exclusive group of former Raiders who have played at college hockey’s highest level was never guaranteed. He stood a 5-foot-5 and weighed 125 pounds as a high schooler, Todd Carroll said. Not the sort of dimensions that lead to college coaches beating down your door.

“He was diagnosed with Crohn’s disease, which prevented him from utilizing the nutrients in his digestive system,” Todd said. “He got down to the Mayo Clinic and they figured out what it was. It was like the switch flipped and he could finish developing physically.”

As Carroll grew to his current 6-foot, 185 pounds, his game developed, too. After high school, he played a season for the Sioux Falls Stampede’s 18-U AAA team and another for the North American Hockey League’s Aberdeen Wings. His progression continued with a final year of junior hockey in 2017-18 with the United States Hockey League’s Green Bay Gamblers.

"I think, like a lot of people, he ran into a lot of different walls on his journey (to college hockey),” said Bryce Barry, Northfield’s head coach during Carroll’s first three varsity seasons. “I think a lot of people at some point would have packed it in and said, ‘Nah, I’m not going to do this anymore,’ and settled for playing club hockey or just quit playing altogether.”

Unlike Rudy Ruettiger, the refuse-to-quit Notre Dame football player with, borrowing from the movie again, “barely a speck of athletic ability,” Carroll was a multi-sport standout (tennis, baseball, golf, football and hockey) who excelled at most everything he tried. He played for Northfield’s varsity tennis team as a seventh grader.

Barry and Luckraft both said Carroll’s superior skating and rare vision and anticipation for the game allowed him to excel despite his undersized stature.

“The one thing that I knew right away with Andy, he was an exceptional skater … really, really fluid,” Luckraft said.

"He was so smart, he never put himself in a bad position," Barry said.

As for Carroll’s Rudy-like insistence on playing in college, Luckraft couldn’t help but notice that, too.

“Whatever path that he needed to take, he was willing to take it,” Luckraft said.

Carroll, playing in the Frozen Four for a second-straight year, hasn’t forgotten his roots. On the contrary, he embraces them.

In the November podcast, Carroll said he sits next to freshman defenseman Bennett Zmolek, a Rochester native, in the Mavericks’ locker room. The two joke with teammates about how the Big 9 Conference is the powerhouse of the state. Carroll likes to brag in jest to Zmolek how Northfield has the best rink (a bare bones facility known to locals as “The Structure”) in the state.

“We have a good time with it,” Carroll said about their southern Minnesota high school playing days. “You know, I think there is something to be proud of. Being proud of where you came from. Playing all four years at Northfield … had an absolute blast in high school.” 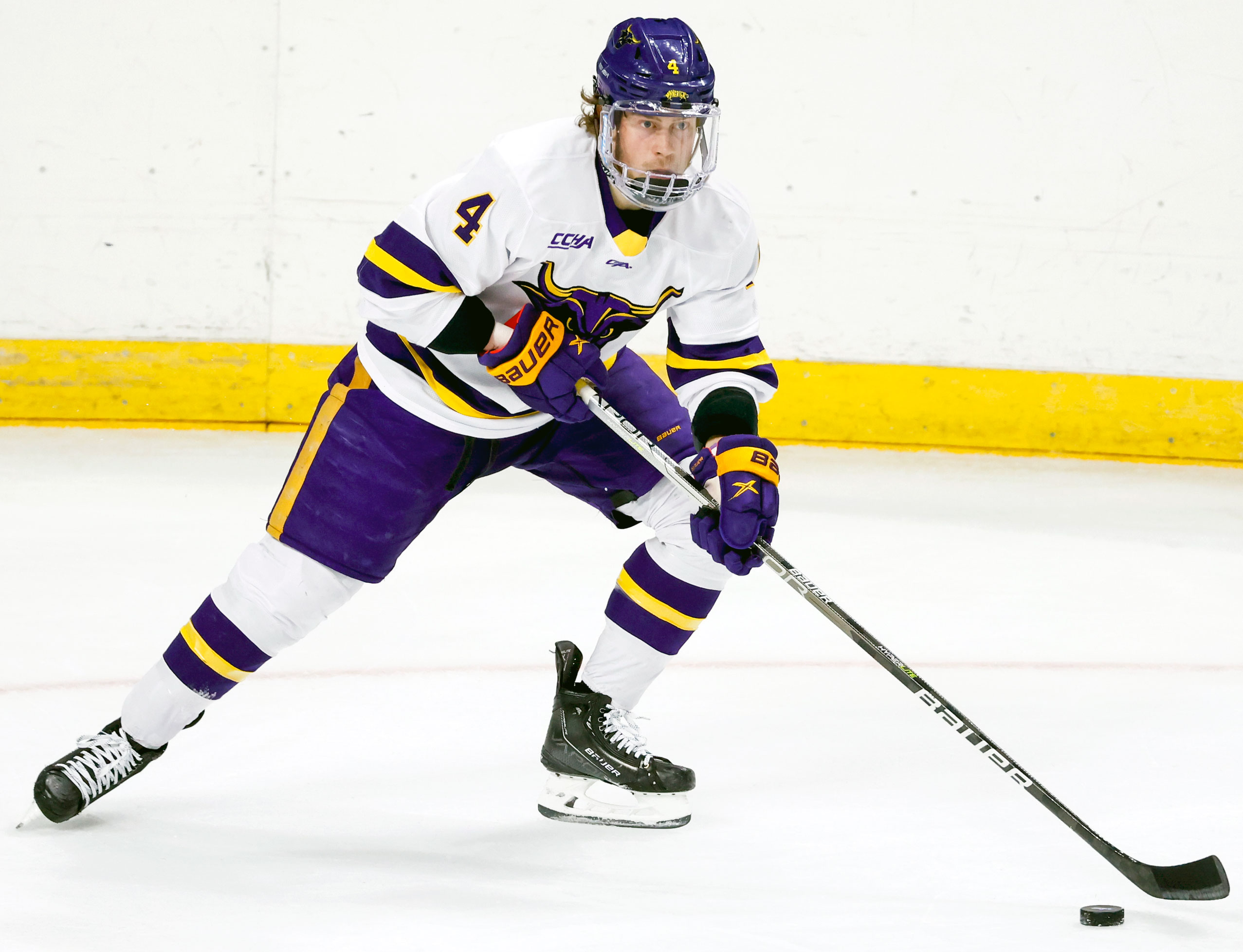 Minnesota State senior Andy Carroll has three goals and 13 assists in 41 games for the Mavericks this season. Photo courtesy of Minnesota State