Prior Lake star Alex Bump's decision to stay home for his senior season led to iconic snapshot, could have lasting impact on high school hockey 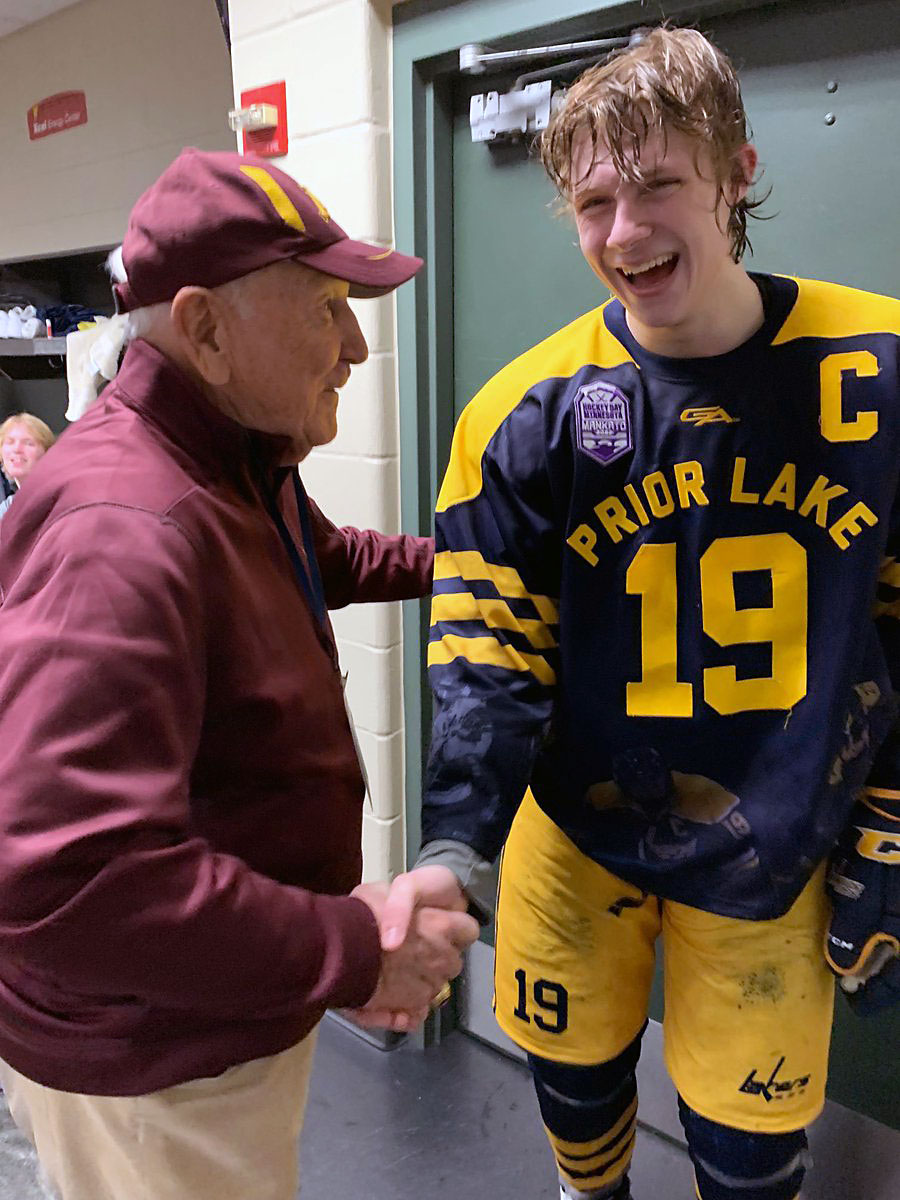 Alex Bump flashed a piano-key smile as he stood next to John Mayasich, the Eveleth star who is to the Minnesota state boys’ hockey tournament what Bobby Jones was to major championship golf or, switching to four legs, Secretariat to horse racing’s Triple Crown.

Talk about a snapshot for the ages. Prior Lake’s Bump, who had just scored five goals in a state tournament quarterfinal, hobnobbing with the 88-year-old Mayasich, legendary owner of almost every state tourney scoring record.

The impromptu Bump and Mayasich get-together was one of the great moments of this year’s state tournament. And it came perilously close to to never happening.

Rewind four months and Bump, playing junior hockey in Omaha for the United States Hockey League’s Lancers, was on the fence about returning to Prior Lake. The 6-foot, 194-pound forward was off to a great start and seriously considering staying in Omaha for the duration of the season.

Dozens and dozens of Minnesota hockey players have traversed that same route — leaving their high school teams early to play in various other leagues with the hope of accelerating their development and turbo-boosting their careers.

Back in the early 1990s, Prior Lake coach Joe Pankratz was one of those starry-eyed early departures. A former youth hockey phenom oozing with undeniable — but raw — talent, Pankratz was one of four sophomores on a Bloomington Jefferson team that won the 1992 state Tier I championship. It was the first of three-straight state titles for the Jaguars, but the first and last for Pankratz.

“I was an interesting deal in that I am 16 years old, and you think you know everything,” Pankratz said. “It’s a decision I regret. In hindsight, I would have stayed home and won three titles.”

Pankratz left after his sophomore season to play for, coincidentally, Omaha in the USHL. He spent another season in the USHL with the St. Paul Vulcans, part of the following season with the University of Minnesota and, following a serious knee injury, saw his career end in 1996 with the Seattle Thunderbirds of the Western Hockey League.

“I don’t know of one time it has ever hurt a player to stay in high school,” said Saterdalen, who retired in 2002. “But sometimes when you leave early it can get you in trouble.”

State Tournament - Most Goals in a Single Game

Saterdalen, who has grandsons coming through the Eden Prairie youth and high school programs, says he’s a fan of the opportunities junior hockey presents, “For the kids who have graduated, I just love it.”

Minnesota high school hockey, Saterdalen believes, offers a unique opportunity to play high-level hockey with and for neighborhood buddies. In his mind, there is no substitute.

“There is something to being in that locker room, looking around at your teammates and saying, ‘I don’t want to let these guys down,’” said Saterdalen, who made a congratulatory phone call to Pankratz after the Lakers’ Section 2 championship victory over Chaska. “That brings out the best in kids. In juniors, you might have a guy from Texas and a guy from Florida and a guy from Indiana on your team. I don’t know if you play as hard or bring your A game as much when you are in a group with guys from around the country.”

Bump was convinced his decision to stay was the right one even before his five-goal outburst — the third most in single-game tourney history behind the seven and six scored by Mayasich in the early 1950s and six scored by Dodge County's Brody Lamb last year — in the Lakers’ 6-0 state quarterfinal victory over Cretin-Derham Hall March 10. The opportunity to play in the state tournament was his primary reason for returning, he said after the victory over the Raiders.

“Yeah, that was probably the biggest factor,” he said. “I mean, we knew that we were going to be the team coming out of our section this year.

“That’s a dream come true, playing out there in this tournament.”

A Vermont commit, Bump undoubtedly elevated his status for the July 7-8 NHL Draft with an 83-point regular season — tied for fourth best in the state. Bump, ranked 69th among North American skaters by NHL Central Scouting, joins a long list of high-profile players who in recent years have dismissed overtures to forego their high school senior seasons to play elsewhere.

St. Thomas Academy’s Jackson Hallum returned for his senior season with the Cadets in 2020-21 despite being a third-round draft pick of the Vegas Golden Knights. Hermantown’s Blake Biondi also was coveted by junior league teams and the USA Hockey’s National Team Development Program. He chose to play his senior season with the Hawks, earning the 2020 Mr. Hockey Award as the state’s top senior.

Biondi, who played this season for Minnesota Duluth, pointed to Eden Prairie’s Casey Mittelstadt, the 2017 Mr. Hockey winner, as one of his inspirations for sticking around.

Mittelstadt was playing for the Green Bay Gamblers and leading the USHL in scoring in fall 2016 when, as initially planned, he returned to Eden Prairie for the start of the high school season. He scored 72 points in 30 games, helping the Eagles to a third-place finish in the state tournament and was drafted in the first round, eighth overall, by the Buffalo Sabres three months later.

Many top players in recent years have pointed to Mittelstadt's decision to stay home as the template they followed for playing through their senior seasons.

Several high school coaches said they believe Bump’s headline-grabbing quarterfinal performance  — and brilliant season overall  — could have something of a Mittelstadt Effect on the state’s next several classes of star players.

We hope every year that every player in the state stays. The better high school hockey is, the more enticing it is for high school players to stick around.

Cretin-Derham Hall coach Matt Funk had a front-row view of Bump’s quarterfinal wizardry. While disappointed the Raiders couldn’t find a way to slow the Prior Lake juggernaut, Funk has a deep appreciation for Bump’s willingness to stick with the Lakers for his senior season.

“To stay and do something special and make a run …  it’s a great example of not rushing into that next phase of your hockey life,” Funk said. “I think there is some of the opposite impact, too, of guys who have left early and didn’t have it go as well as they planned. They are in and out of the lineup, missing out on being with their friends and going to state.”

Both Funk and Ammerman said they devote time to, in effect, recruiting their own players. Funk, who can point Tampa Bay Lightning defenseman Ryan McDonagh as a former Raiders standout who played through his senior season, recently held a meeting with his junior class.

“I tell them I am there for them if they need some advice,” he said. “I want to put them in a position to succeed. It sounds a little bit cliche, but they are getting to the point where hockey becomes a business. I might be the last coach who cares about them as an individual.”

Moorhead’s Pee Wee AA and Bantam AA teams won state championships this spring, signaling a winning future for the high school program, assuming those top players stick around and play for the Spuds. Ammerman, for one, isn’t comfortable assuming anything when it comes to his program's future.

“Right now, we are recruiting our current players to come back next year,” he said. “We’re also recruiting at the youth hockey level. You need to be visible. You need to be around the rink getting to know players and families and developing relationships so people know that you care.”

As for that instantly iconic photo, according to John Millea of the Minnesota State High School League, it had 600,000 views in two days after being posted to the MSHSL website. The photo was taken outside the Prior Lake locker room at the Xcel Energy Center in St. Paul after the Lakers’ win over Cretin-Derham Hall.