True to Their Schools 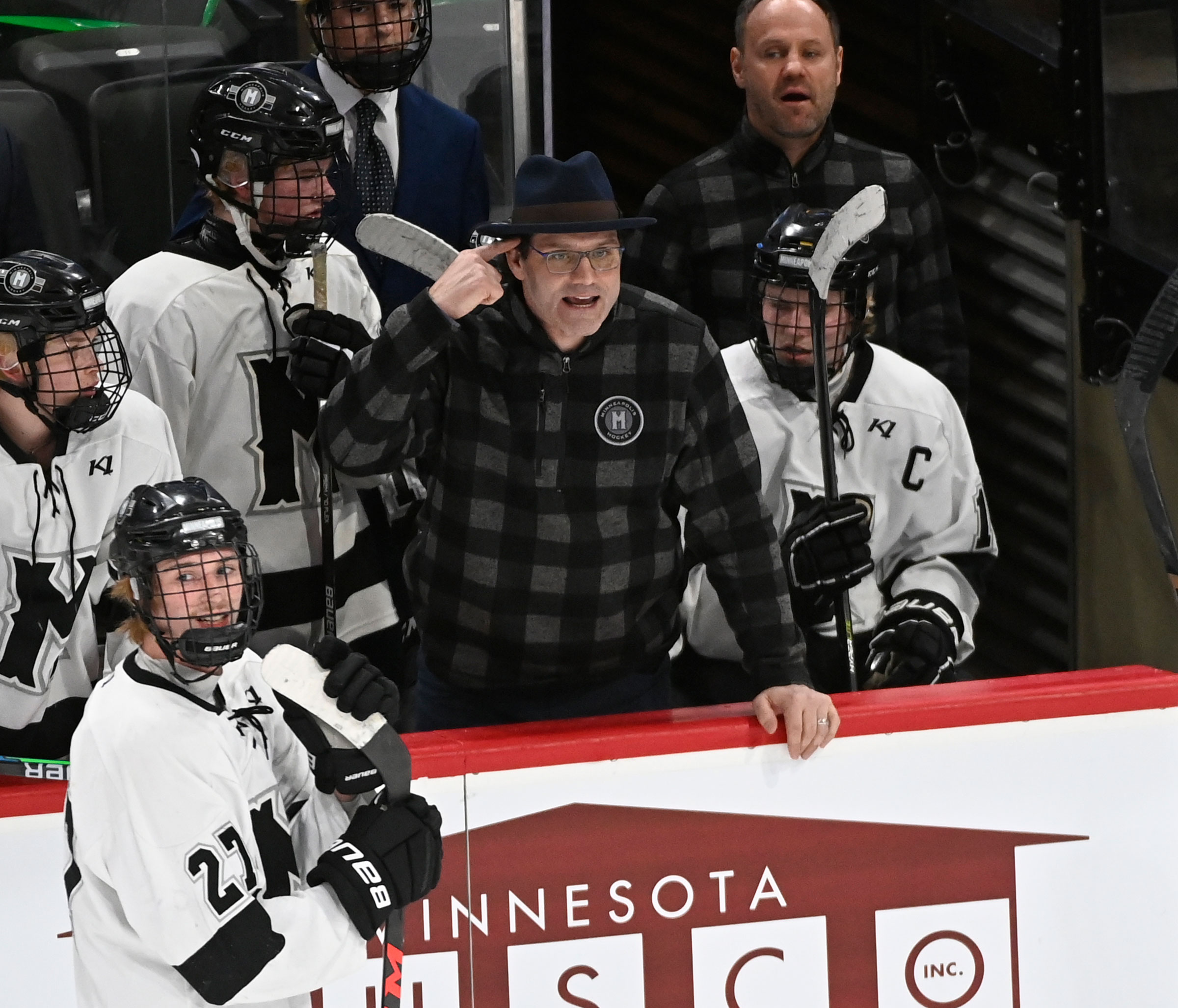 Minneapolis coach Joe Dziedzic, who starred at Minneapolis Edison as a high schooler, brought some flair to this year's state Class 1A tournament with his distinctive blue fedora. Photo by Tim Kolehmainen, Breakdown Sports Media 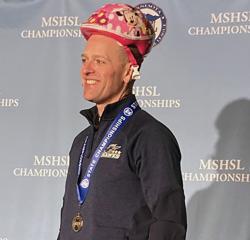 “I knew I wouldn’t get through this without crying,” Andrews said after being asked what it meant to win his first title leading the Hawks. “I grew up here in this program since I was 4. And I'm speechless, but it means the world to me.”

Hermantown’s 3-2 victory over Warroad for the state Class 1A championship March 12 and Andrews' heart-on-his-blue-and-gold-coaching-jacket-sleeves emotions in the aftermath served as a dramatic ending to one of the tourney’s fascinating subplots.

Of the 16 head coaches (Class 1A and 2A) in this year’s state tournament, half played for the teams they now lead.

In Class 2A, the alumni coaches were Moorhead’s Jon Ammerman and Lakeville South’s Josh Storm (a Lakeville High graduate).

In Class 1A, all but two of the eight coaches played for the programs they now guide. Andrews, Warroad’s Jay Hardwick, Minneapolis’ Joe Dziedzic (a Minneapolis Edison graduate), New Prague’s Brad Drazan, Alexandria’s Josh Meyers and Monticello’s Eric Nelson all were part of the alumni brigade.

“I think it's a familiarity, and a lot of pride,” Hardwick said about the allure of returning home to coach. “You see it at the high school level and you see it at college where guys kind of gravitate toward those programs that they've been a part of because they kind of know how it works.

“And I think that it was kind of natural for me. I didn't have any intentions of coaching when I moved back to Warroad, and it just kind of happened. And here I am today 11 years later.”

Dziedzic, like Andrews, Hardwick and the rest of the alumni coaches, was a star player in high school. He won the Mr. Hockey Award in 1990 as the state’s top senior skater. He brought a bit of a throwback flair to the tourney by not only guiding a Minneapolis program to the event for the first time since 1994 but also by paying homage to some of the great coaches who came before him.

“I just kind of got bored of wearing a baseball hat all the time,” Dziedzic said about his distinctive dark blue fedora. “I thought I’d like to do something to tip my hat to Willard Ikola and Jim Baxter. Those were the guys, the coaches when I grew up, who were famous or had some personality.

“I thought this was just kind of a tribute to those guys.”

Neither Ikola (who starred as a three-time state champion goaltender at Eveleth) or Baxter (the leading scorer for Minnehaha Academy his junior and senior seasons) coached at their alma maters. In fact, most of the state’s winningest early bench bosses (coaches such as Roseau’s Oscar Almquist, International Falls’ Larry Ross and Eveleth’s Cliff Thompson) played for high schools other than the ones they coached.

The same goes for a second wave of state coaches who earned hall of fame status. Tom Saterdalen, a five-time state champion head coach at Bloomington Jefferson, grew up in Rochester. Albert Lea’s Roy Nystrom and Rochester Mayo’s Lorne Grosso, each with more than 700 career victories, also grew up and played played elsewhere.

“I think that it’s a great trend,” said Mike Taylor, an Apple Valley native and former Eagan head coach who serves as president of the Minnesota Hockey Coaches Association. “I always tried to have alumni on my staff because they know the school and they can relate to the kids. Obviously, they are going to know the tradition of the program right away because they were a part of it.”

Andrews, who has a 115-19-8 record in his five seasons leading the Hawks, famously scored with 21 seconds left to give Hermantown a 4-3 over Proctor in 1998 for the Section 2 title and the program’s second-ever berth in the state Class 1A tournament.

“I’ve dreamed of this moment since I was 4 years old on the driveway, scoring the game-winning goal, and I did it,” an overjoyed Andrews said while being interviewed on the ice after the victory. “It’s the most unbelievable feeling of my life.”

Andrews served as an assistant under iconic Hermantown coach Bruce Plante and took over the program after Plante retired in 2017 with three state championships and 547 victories in his 28 seasons. Andrews, like Dziedzic, wore some distinctive headgear after winning his first title.

For years, it's been a tradition among Hermantown players to bestow a pink Minnie Mouse bicycle helmet to the player of the game, as chosen by the previous recipient.

“I told Ty (Hanson) when he gave me this helmet, ‘This the greatest honor of my life, to be able to put this helmet on as a state champion as a coach,’ ” Andrews said.

As for Andrews coaching his hometown team, well, that seemed about as preordained as the tears he shed on championship Saturday.

“I wanted to give back to something that was a huge part of my life,” said Andrews, a primary character in the documentary film “Hockeyland” that is set for a nationwide release this fall. “I knew I wanted to teach and I knew I wanted to coach and I didn't really want to do it anywhere else.

“I am the luckiest person in the world to be able to do what I do.” 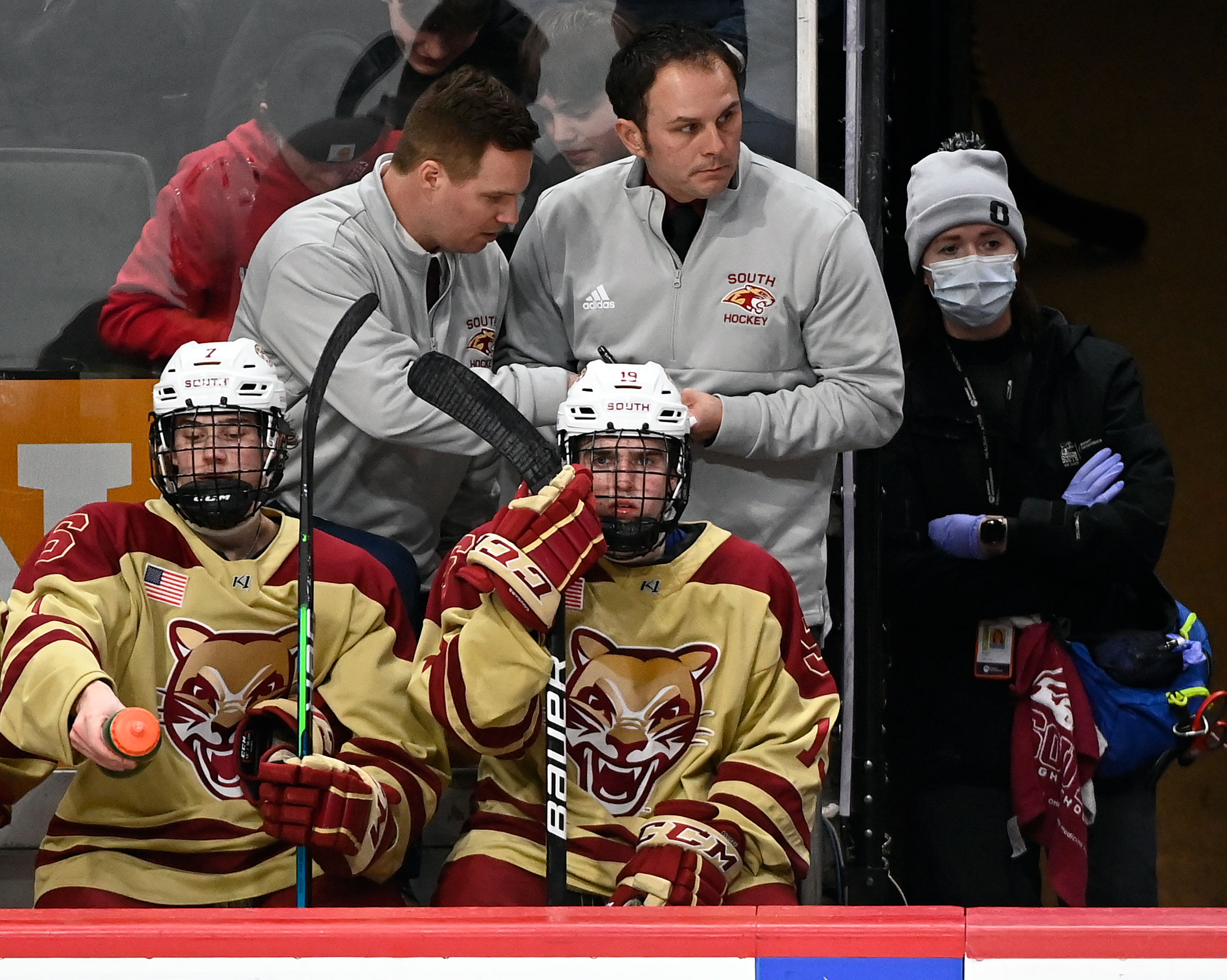