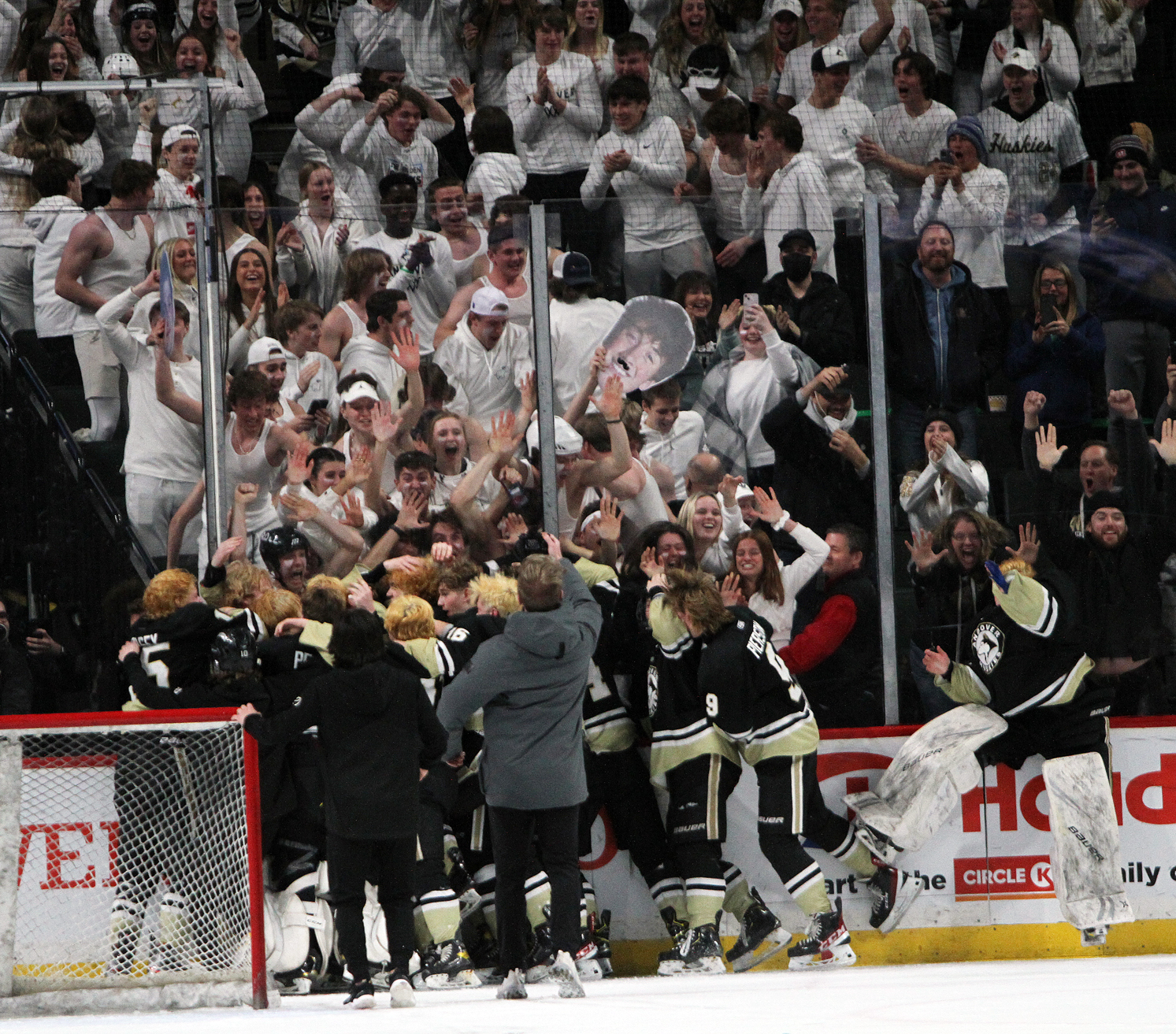 Andover players celebrate with their student section after their 6-5 double-overtime victory over Maple Grove on Saturday in the state Class 2A championship game. Photo by Drew Herron

Logan Gravink blacked out, Weston Knox saw a horrible end to his season flash before his eyes and coach Mark Manney had his part in a potential doomsday scenario planned to a T.

There were so many twists and turns in Saturday night’s state Class 2A championship game at they Xcel Energy Center between Andover and Maple Grove that any sort of ending was possible to a game instantly in the discussion as one of the best in tourney history.

Turns out for the Huskies there was no need for concern.

Gravink, a senior forward, ended it in double overtime, giving the Huskies a 6-5 triumph, after taking pass from Hunter Zinda and …

“Hudson got the puck, and I think everything went black after that,” Gravink said. “All of a sudden we were celebrating.”

Zinda’s rush to the net and shot resulted in a rebound off a Maple Grove defender that popped onto the tape of Gravink’s stick. In a game that had multiple Grade A+ opportunities that were not converted, there was no misfiring this time.

Gavyn Thoreson and Cayden Casey had done much of the scoring in the tournament — and all season — for the Huskies. And while Gravink is a gifted offensive talent, he probably wasn’t the first, second or third name on many minds as being the player to end the highest-scoring championship game in single class, Tier I and Class 2A history.

“It's funny how often in overtime it's somebody else, right?” Manney said. “The heroes are made in those moments.”

The goal gave No. 5 seed Andover, making its third state tournament trip and first appearance in the championship game, its first state title. The Class 2A championship matches the title won by Andover’s girls’ hockey team two weeks ago.

And, really, there was nothing to it. All the Huskies had to do was get a goal from Jacob Pierson with 3.5 seconds left in the opening period to salvage a 3-2 deficit despite being outplayed for most of the opening 17 minutes.

The Huskies pulled ahead 4-3 early in the third on a Casey goal, only to have Maple Grove take the lead at 5-4 on goals by Josh Giuliani, his tournament-best eighth, and Chayton Fisher. The goal from Fisher came with 6:05 left in the third and, with time running down in regulation, figured to stand as the winner.

Not so fast. Thoreson scored with 1:58 left in the third to force overtime, his fourth goal of the tournament. Gravink’s goal came with 8:01 left in the second overtime period.

“(Longtime state tournament broadcaster) Lou Nanne came and talked to the boys and he said that it’s the best hockey game he’s seen here at the state tournament since 1969, all those years ago,” Manney said. “And I can't say I disagree with him. I can't think of one that was better.”

As the game extended into a second overtime Manney, a former Air Force One pilot, considered how he would handle both a victory and a loss.

“I would have been happy either way at that point to be honest,” he said. “We have so much respect for Maple Grove and their kids and their coaching staff and their entire program, if they had won and we got second, I think we could have held our heads high and skated off the ice knowing we had given it our all.”

Knox had his moments of doubt, too.

“Every time they would come down, every shot,” the senior defenseman said about his season flashing before his eyes. “Especially when you lose sight of the puck, that's when you really start panicking.”

The game will certainly stand as a worthy addition to the pantheon of the tourney’s most entertaining championship bouts, joining Eden Prairie’s 3-2 triple-overtime win over Duluth East in 2011 in the discussion of recent all-time thrillers.

“A lot of people got to see one hell of a hockey game, and it's a good way to bring (the state tournament) back out of COVID and give the fans something amazing,” Maple Grove coach Todd Bergland said.

Manney, who became a media conference darling during the tournament because of his bottomless bag of one-liners, couldn’t resist one more zinger before exiting the stage.

“(Huskies assistant coach Brett Barta) and I are Moorhead guys, so we're used to having disappointment on Saturday night,” Manney said in reference to the Spuds’ 0-8 record in title games. “I’m going to have to go back up there and tell them it really wasn't that hard once we got to the championship game.” 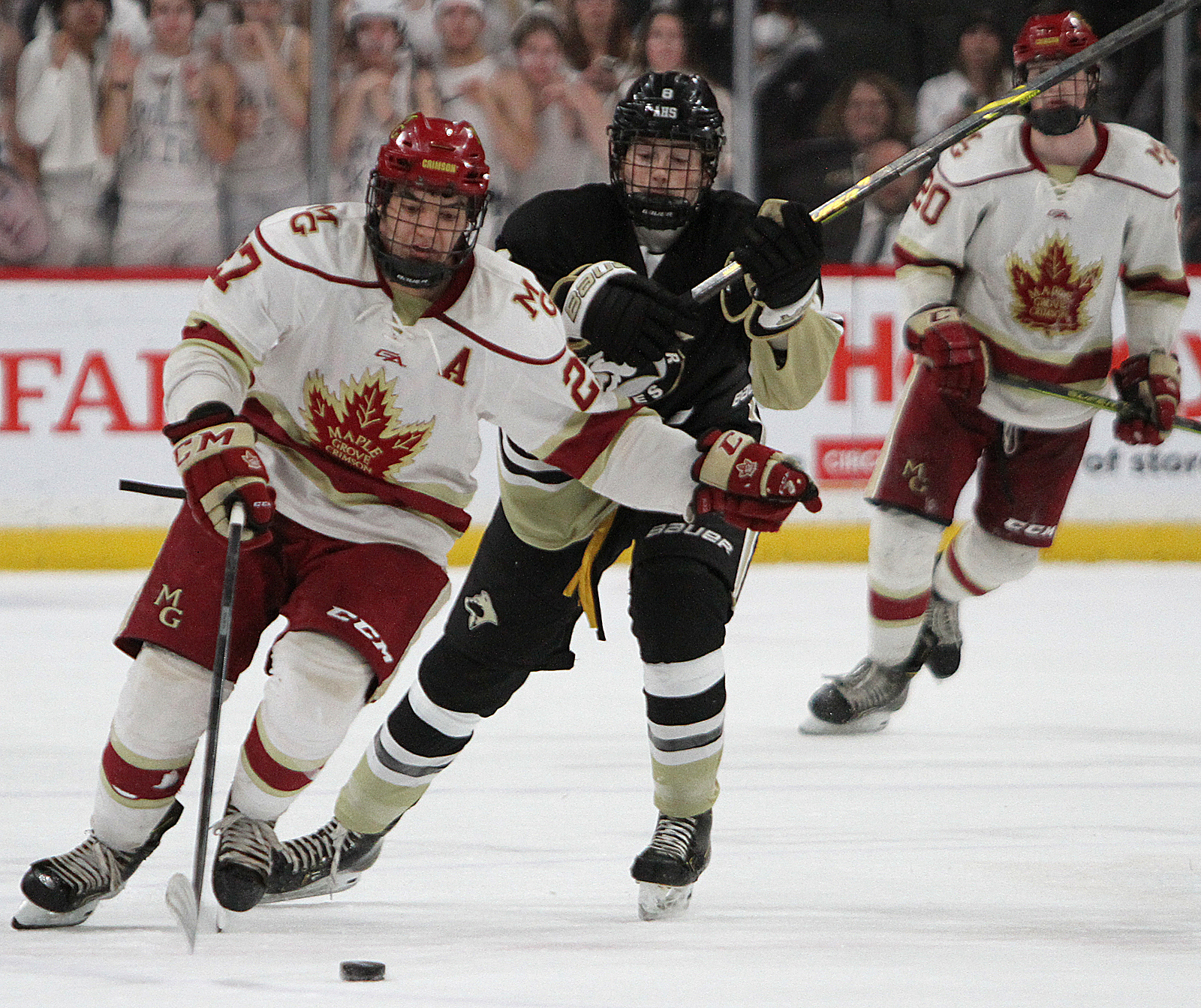 Maple Grove's Finn Brink, left, had a goal and an assist Saturday night against Andover in the state Class 2A championship at the Xcel Energy Center in St. Paul. Andover's Cooper Conway is a step behind. Photo by Drew Herron