Hawks fend off Warroad for Class 1A title thanks to the impeccable work of Ty Hanson, Beau Janzig 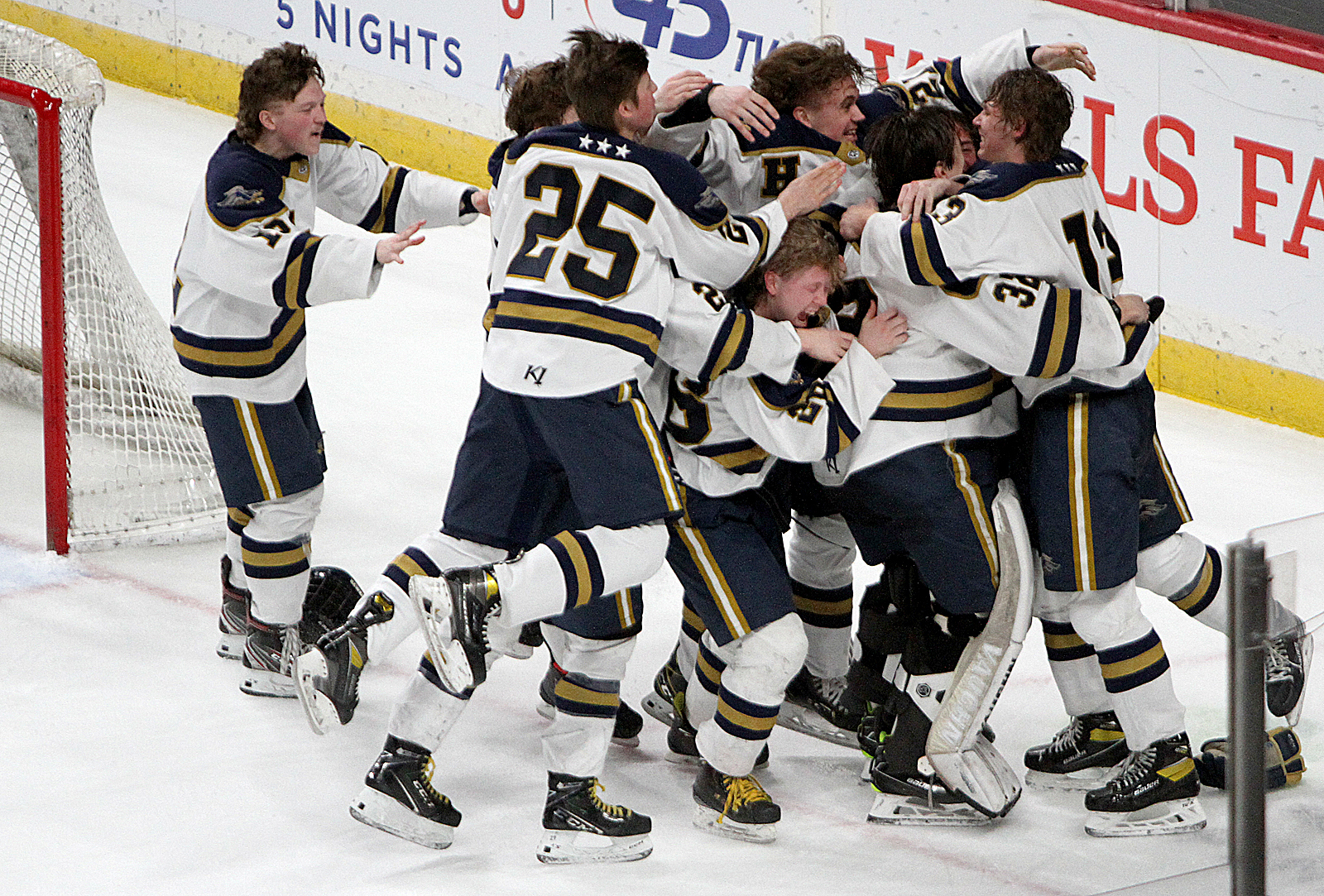 Hermantown players celebrate their 3-2 state Class 1A championship game victory over Warroad on Saturday at the Xcel Energy Center in St. Paul. Photo by Drew Herron 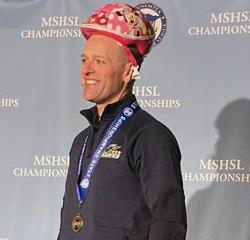 The pink Minnie Mouse bicycle helmet that Hermantown players trade from player of the game winner to winner landed on the head of Hawks coach Pat Andrews Saturday.

“I told Ty (Hanson) when he gave me this helmet, ‘This the greatest honor of my life, to be able to put this helmet on as a state champion as a coach,’ ” an emotional Andrews said after No. 1 seed Hermantown beat No. 2 seed Warroad 3-2 in the state Class 1A championship at the Xcel Energy Center in St. Paul.

Andrews, who wore the helmet during the postgame media session, has been involved in Hermantown hockey since he was a 4-year-old outfitted with his first pair of skates. He graduated from assistant to head coach five years ago. Saturday’s championship was his first and the program's fourth.

Five years between titles is about 50 years in Hermantown time, where expectations each season are state title-or-bust.

“I think 2018 was the hardest, because it broke that streak of (eight-straight) championship games and you’re also a first-year head coach,” Andrews said about finishing third in 2018, the culmination of his first season leading the program. “And after that, you’ve just got to own it and try to do your best and be you.

“When you have guys like this it makes it pretty easy.”

Andrews gave a nod to defensemen Beau Janzig and Ty Hanson and forward Zam Plante as he made that last remark. While Plante’s two goals were critical to the victory, the work of Janzig and Hanson was just as instrumental.

Warroad split up its top offensive duo of Daimon Gardner and Jayson Shaugabay in the third period in an effort to break at least one of them free from the shackles of Hanson (a junior committed to Minnesota Duluth) and Janzig, the Hawks’ 6-foot-2, 200-pound senior captain.

Hermantown (29-2-0) immediately countered by splitting up Hanson and Janzig, too.

Warroad (26-4-1) mustered seven shots in the second period and just three in the third. The Warriors tied it at 2-2 on Griffin Marvin’s goal 1:41 into the second period. Plante scored 1:21 later, and Warroad’s scoring chances all but dried up from there.

“There's a reason why Ty is committed to UMD,” Warroad coach Jay Hardwick said. “He is in your face and he skates very well. And Janzig is a steady defensive defenseman back there and he makes it hard on people. And he made it hard on our top line and our top guys today.”

Janzig is no stranger to wrangling with highly talented duos. Janzig often had to drop the hammer on the dust-ups between Hanson and Plante, triggered by their otherworldly competitiveness, this season.

“Zam is a psycho, and Ty's very confrontational,” Janzig deadpanned. “But we got the job done.” 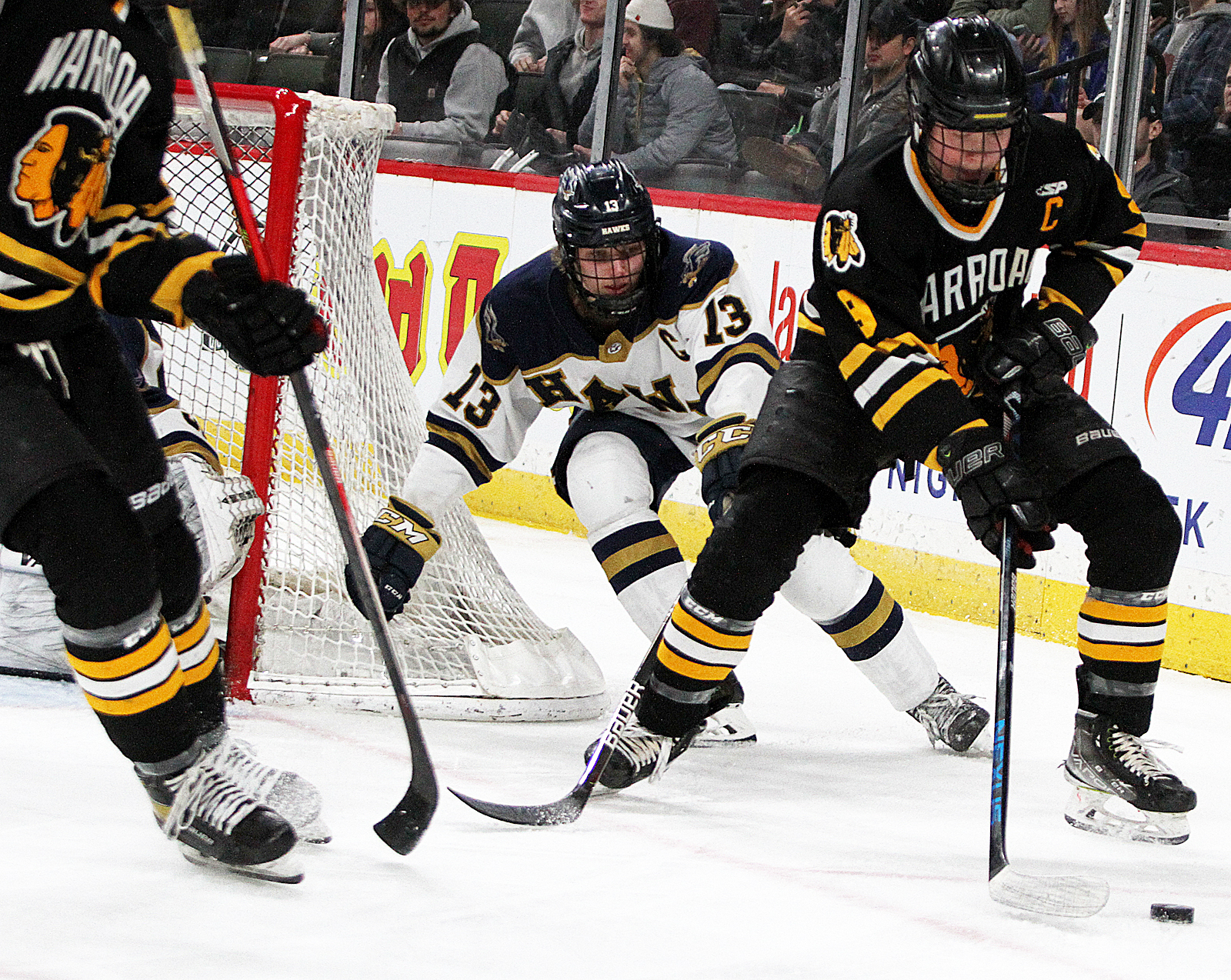