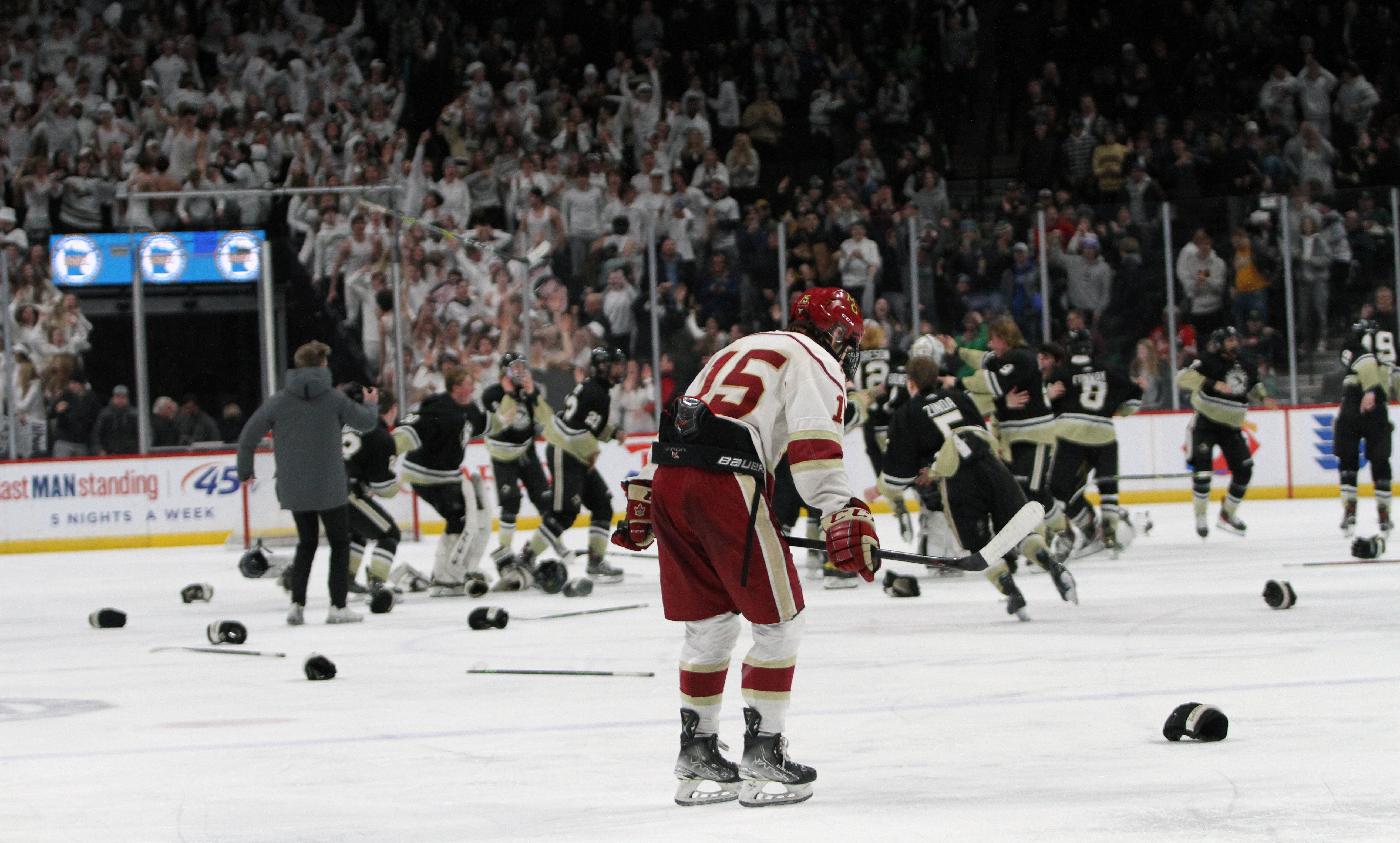 Andover players sprint for their student section after beating Maple Grove 6-5 in double overtime Saturday in the state Class 2A championship game. Photo by Drew Herron

Logan Gravink scored 8:59 into double overtime to give No. 5 Andover a 5-4 win over No. 3 Maple Grove in a back-and-forth Class 2A state championship game for the ages Saturday night at Xcel Energy Center.

The state championship is the first for the Huskies in their third-ever tournament appearance. The last Class 2A tournament that saw a first-time winner came in 2018 when Minnetonka captured the big school title.

The game got off to an explosive start as the teams traded goals and chances in an up-and-down first period that saw Maple Grove escape with a 3-2 lead.

Brink batted home a rebound 12 seconds in to open the scoring, and Giuliani followed 4:32 later with a nearly identical goal to give the Crimson a quick 2-0 lead.

Casey answered for Andover at 8:27 when he swatted home a Thoreson centering feed, but the scoring fest wasn’t over.

Giuliani netted his second of the night by sliding a puck through Austin Braun’s five hole with 17 seconds to play, but Pierson’s tight angle snipe again pulled the Huskies within a goal before the horn sounded to close the period.

Weston Knox tied it at 3-3 late in the second when he wristed a quick pass from Thoreson into a wide-open net.

Casey and Giuliani traded early third-period goals before Chayton Fischer scored with 6:39 remaining in the third period to put Maple Grove up 5-4. Thoreson tied it with a rebound goal with 1:50 left in regulation to force overtime.

The teams gave fans quite the show Saturday night, and the plot twists seemed never-ending.

As Fischer griddy'd his way down the ice in celebration of his third-period goal, the linesman went to review the play for offside.

This time, the Crimson were on the receiving end of good news.

The reviews and tense moments only added to what will surely go down as one of the best state championship games in the 78-year history of the event.