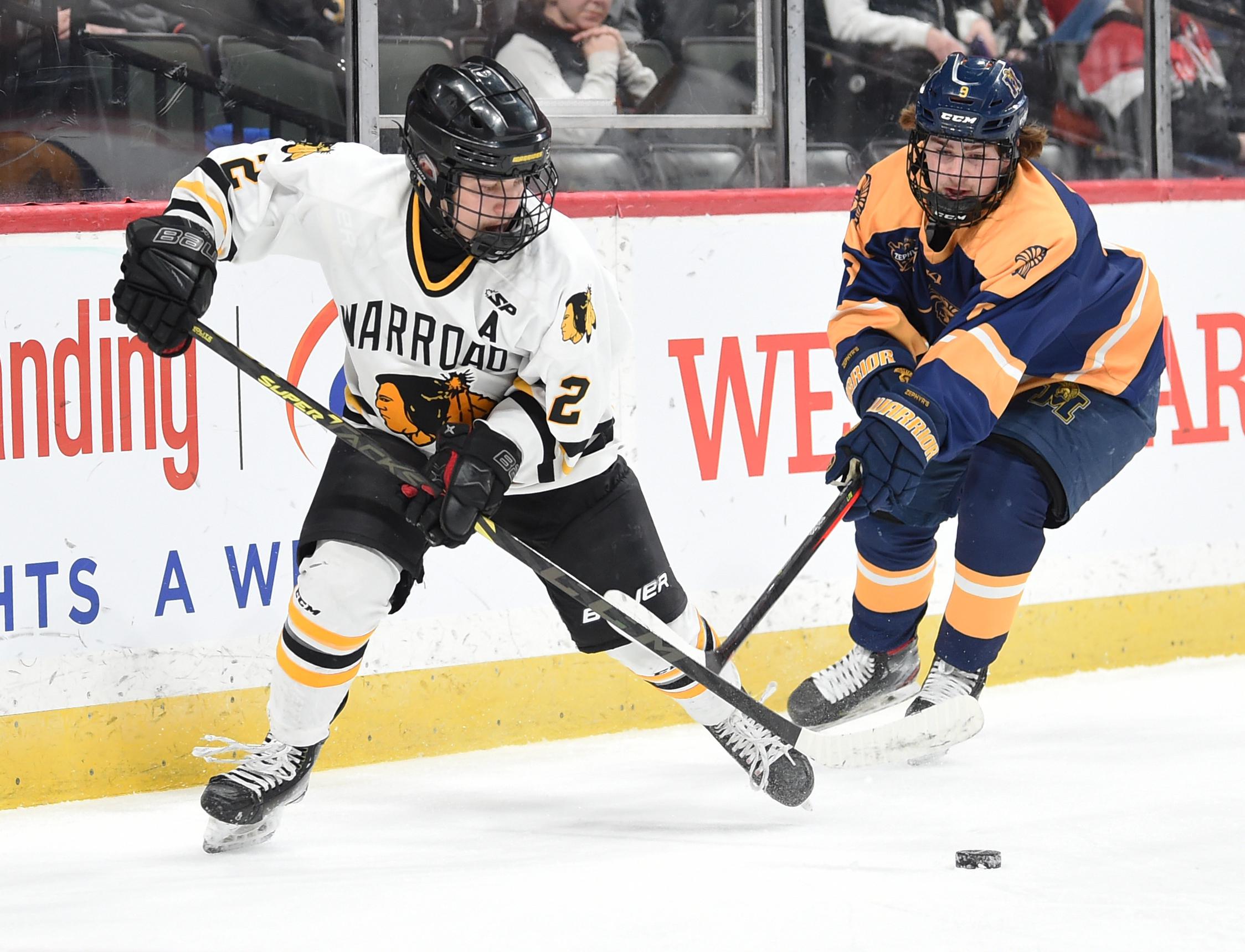 Warroad defenseman Eric Comstock skates with the puck ahead of Mahtomedi's Jonny Grove on Friday in a state Class 2A semifinal at the Xcel Energy Center in St. Paul. Photo by Helen Nelson

A new character was introduced into the Gardner & Shaugabay Show on Friday.

His name is Matt Hard, but everyone in and around the Warroad hockey team calls him Jimbo (a long story we’ll address below).

Hard, the little-known third wheel on the Warriors’ top line, put his name up in the state tournament marquee, right next to his those of his famous linemates, by scoring 2:20 into overtime in No. 2 seed Warroad’s 5-4 state Class 1A semifinal victory over No. 3 Mahtomedi at the Xcel Energy Center in St. Paul.

Daimon Gardner, a Mr. Hockey finalist committed to Clarkson, and Jayson Shaugabay (Minnesota Duluth), are the Division I commits with the massive point totals (combined 164 points) and bottomless bags of tricks.

“I’ve just been a grinder my whole life,” Hard said. “Get it down low and dish it off to these guys.”

Among his other attributes, the 6-foot, 190-pound Hard, a linebacker on the Warriors’ football team last fall, is a one-man wrecking crew in the corners.

“It doesn’t show up on the scoresheet, and you don’t get a lot of notoriety for winning battles in the corner,” Warroad coach Jay Hardwick said. “But when it comes to winning hockey games, it’s a huge part.”

Hermantown’s Zam Plante praised Hard’s prowess in the face-off circle, another overlooked facet of the game, after the teams met in the regular season, although Plante didn’t know Hard’s name at the time.

“He dishes the puck off well, he wins his battles, he’s fast,” Gardner, who registered his second hat trick in as many games, said about Hard.

A team-first guy, Hard most often follows his coaches’ orders. And the orders Friday were to avoid Mahtomedi standout goaltender Ben Dardis’ glove at all costs. Hard had one of Warroad’s prime early scoring chances, but Dardis snagged the puck with his glove.

On his winning goal, Hard deviated from orders and once again fired in the direction of Dardis’ glove. This time the puck went in, deflecting off a piece Dardis’ glove.

“He had a couple of dandy chances earlier in the game,” Hardwick said.

Shaugabay had a goal and three assists, and Warroad’s top line combined for eight points. The unit has 18 points in two tournament games.

“They are very talented,” Mahtomedi coach Jeff Poeschl said. “We certainly had our hands full all night.”

As for the origins of Hard’s nickname, Shaugabay said Jimbo stems from the movie "Boss Baby."

“There’s this one big baby that doesn’t say anything, he just pushes those little ball carts around,” Shaugabay said. “One of our teammates two years ago said, 'there’s Jimbo. He looks like Jimbo.' So it just stuck.”

“But I think I’ve learned to roll with it.” 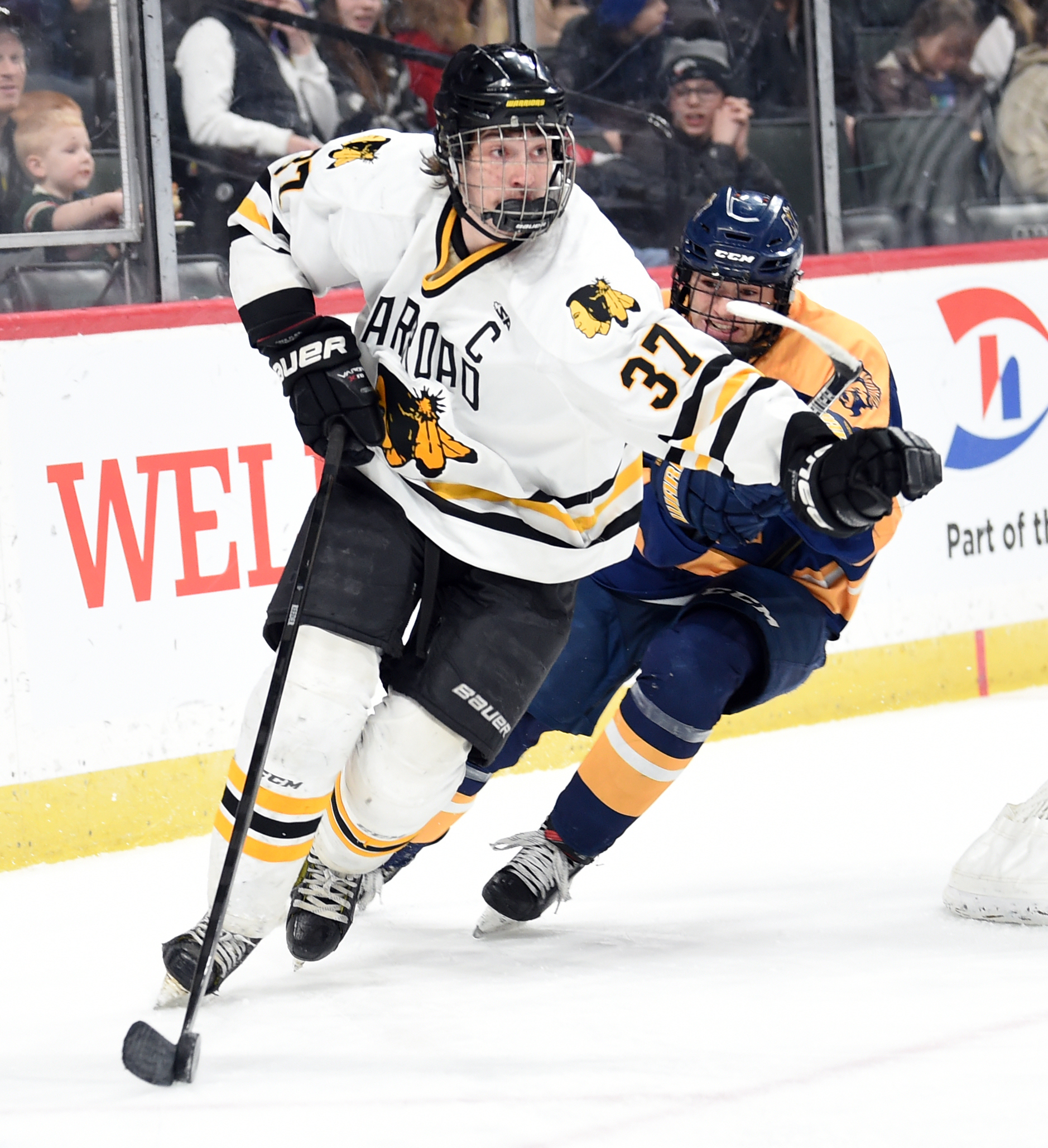 Warroad defenseman Carson Reed works the puck up ice during the Warriors' 5-4 overtime victory over Mahtomedi Friday in the state Class 1A semifinals at the Xcel Energy Center in St. Paul. Photo by Helen Nelson