Save of a Lifetime 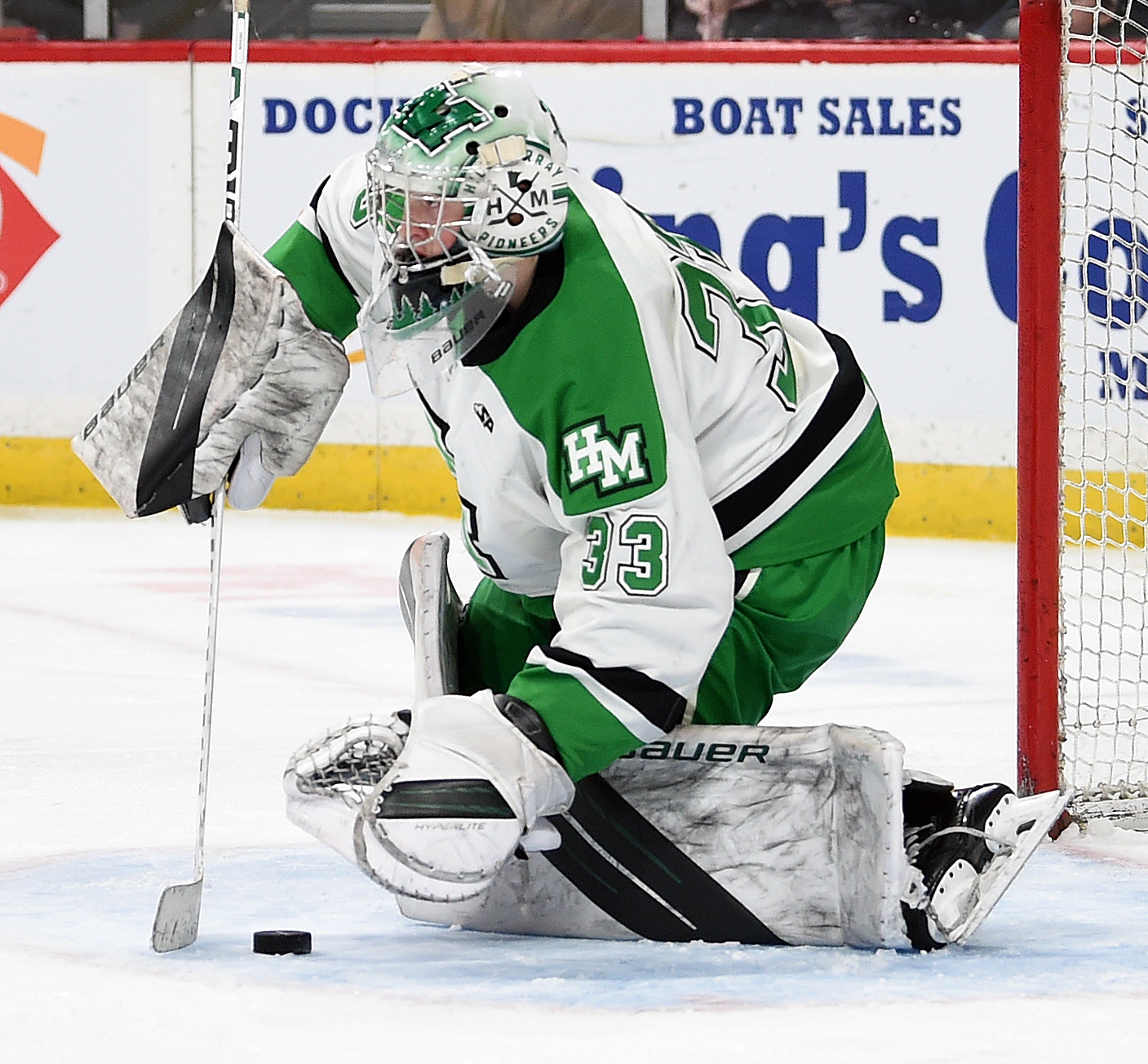 Hill-Murray goaltender Jack Erickson stopped 32 of 34 shots Thursday in the Pioneers' 3-2 win over Lakeville South in a state Class 2A quarterfinal at the Xcel Energy Center in St. Paul. Photo by Helen Nelson

Hill-Murray’s Dylan Godbout was on the ice and in perfect position to watch teammate Jack Erickson make what can only be labeled as The Save.

“I think my jaw hit the ice,” Godbout said about Erickson’s straight up, glove-hand thievery of Lakeville South’s Aidan Willis late in the third period of the No. 1 seeded-Pioneers’ 3-2 victory over the unseeded Cougars Thursday in a state Class 2A quarterfinal at the Xcel Energy Center in St. Paul. “I knew he could make the save, but on this stage to make that in front of this many people … he’ll remember that. I’ll remember that for the rest of my life.”

Willis, a junior who ranks second on the Cougars with 43 points, was all alone to the right of Erickson when he took a feed through the slot from Tanner Ludtke and unloaded a shot seemed ticketed for the back of the net. That’s when Erickson flashed his glove hand, doing the splits as he stretched to snag the puck.

“I knew it was going in that area,” said Erickson, a junior who took over the starting role after Nick Erickson (no relation) departed Hill-Murray in midseason. “I just kind of hoped it hit (his glove). And it did.”

No doubt it was the save of the tournament so far. A lightning bolt of a stop that had Hill-Murray players surrounding Erickson and drowning him in appreciation.

“I hugged him as hard as I could,” Godbout said.

Erickson made an equally good, if less flashy, glove save less than a minute later, helping the Pioneers secure the victory a year after they reached the tournament but were deemed ineligible to play because of COVID-19 protocols.

Lakeville South suffered some heartache of its own a year ago, losing in double overtime to Eden Prairie the championship game.

“You know, Willdo, he scores that goal nine out of 10 times in practice,” Cougars junior forward Tanner Ludtke said about Willis, who had to manage a bouncing puck. “You can’t really be mad at him, the goalie made a good save.”

“I barely even adjusted my tie, and I looked up and it went in,” Hill-Murray coach Bill Lechner said.

Lechner, a former goalie, expressed a deep appreciation for the way Erickson handles himself in practice. Erickson’s work ethic and insatiable desire to stop every puck all the time has set himself up for the type of success he had Thursday, Lechner said.

“He’s not one of those goalies who takes the first 10 shots in warmups and then just kind of stands there,” Lechner said. “Every shot coming on him is the game winner. And that pays off, obviously, in these moments.” 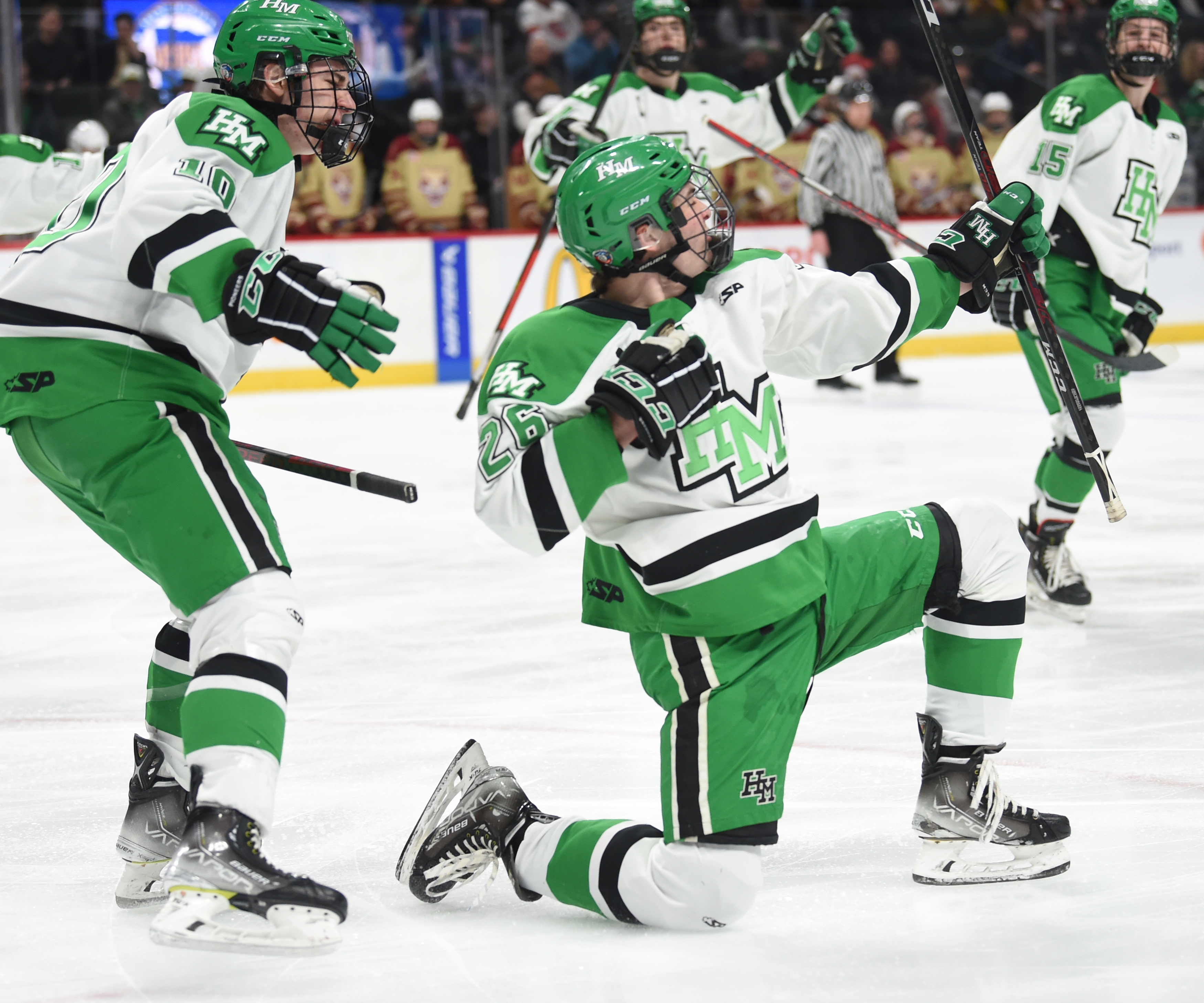 Hill-Murray's Axel Begley unloads his goal celebration after scoring in the first period of Thursday's state Class 2A quarterfinal against Lakeville South. Photo by Helen Nelson 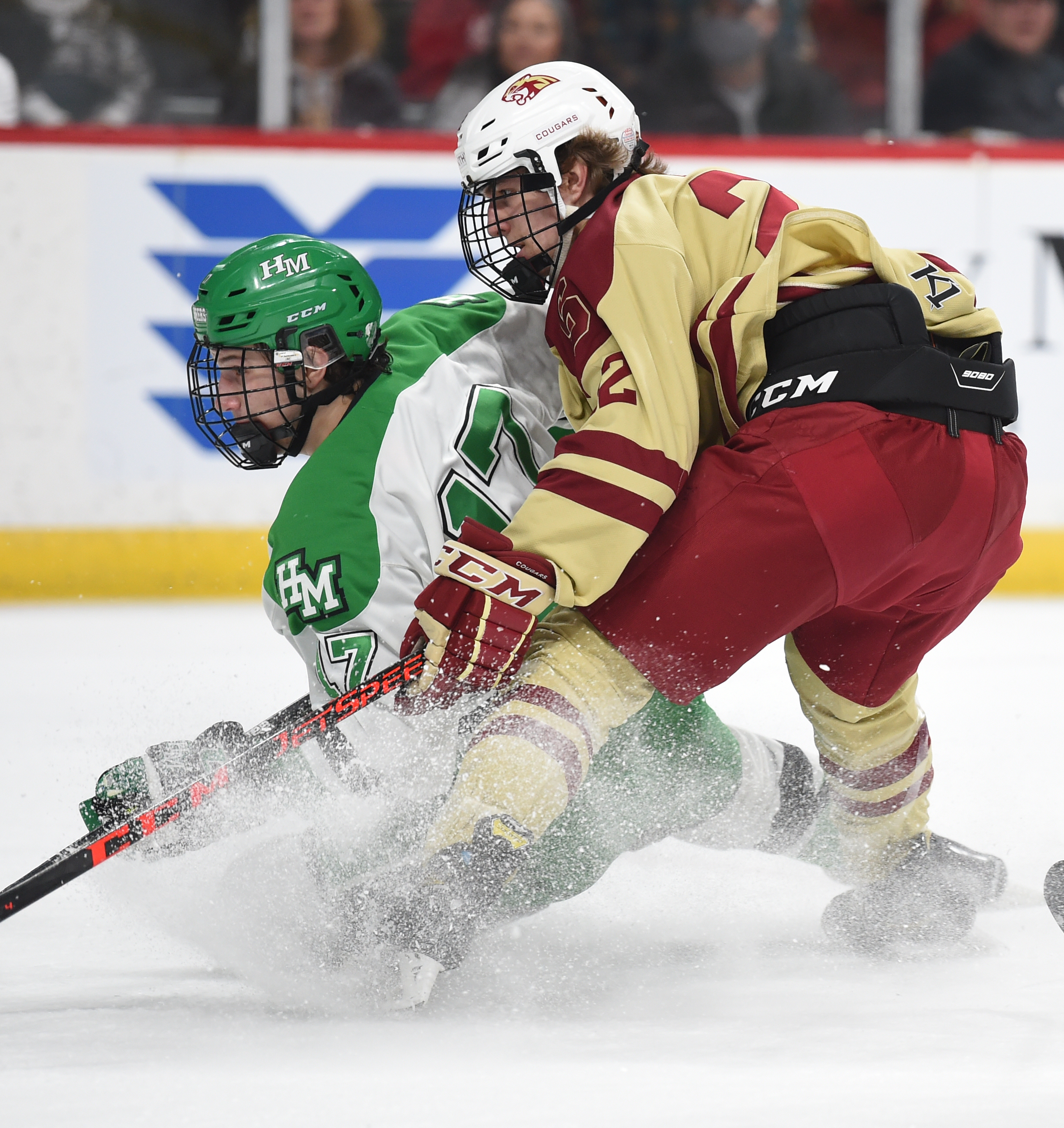 Hill-Murray's Dylan Godbout, left, drives to the net in front of Lakeville South's Ryder Patterson during Thursday's state Class 2A quarterfinal at the Xcel Energy Center in St. Paul. Photo by Helen Nelson