Maple Grove puts it all together to beat Edina 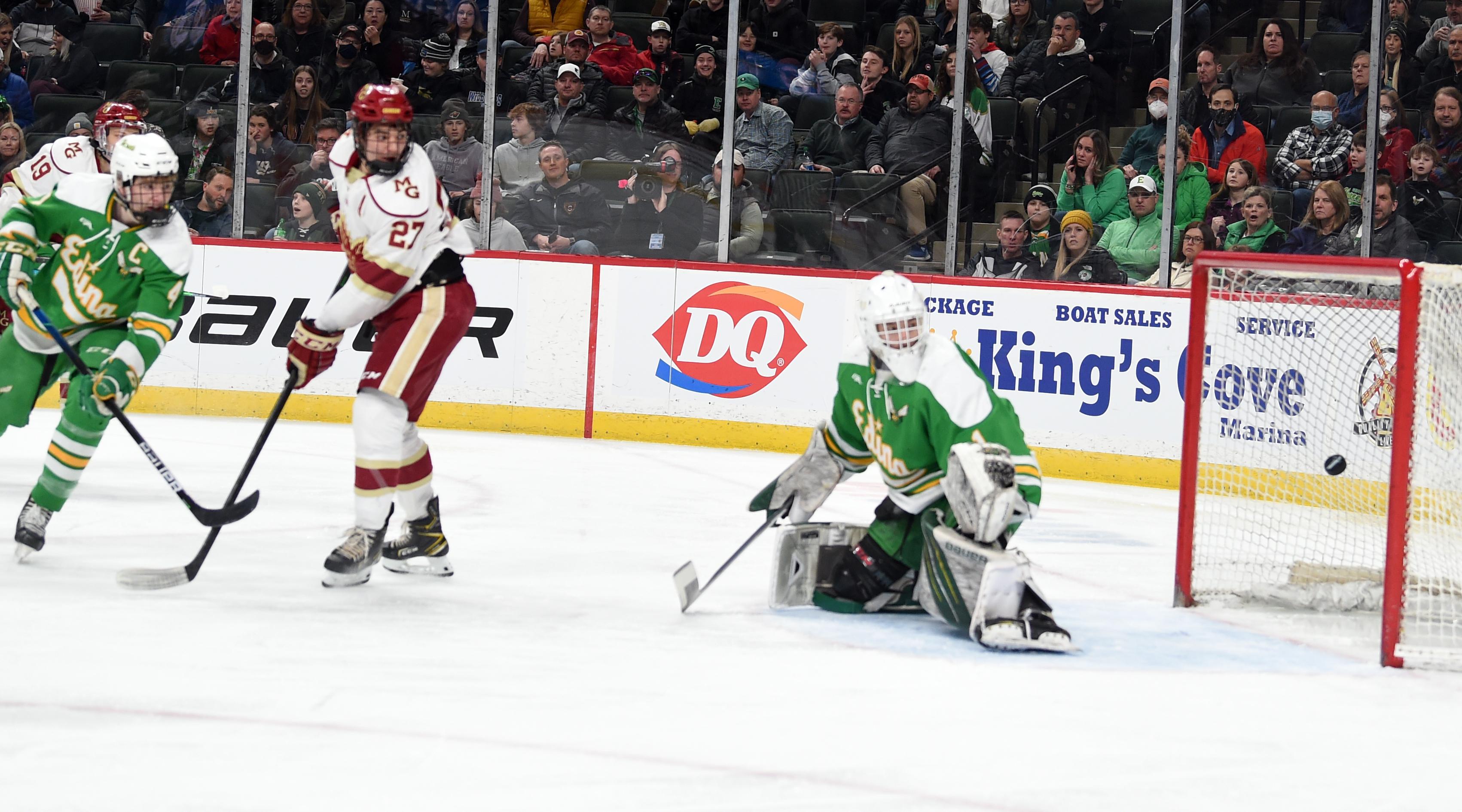 Maple Grove's Finn Brink (27) watches as a puck sails past Edina goaltender Robbie Clarkowski on Thursday in the Crimson's 5-2 victory over Edina. Photo by Helen Nelson

All of it was fully synchronized and running at max efficiency for No. 3 seed Maple Grove on Thursday in the Crimson’s 5-2 state Class 2A quarterfinal victory over unseeded Edina at the Xcel Energy Center in St. Paul.

“Our forecheck was very good tonight,” Maple Grove coach Todd Bergland said. “And our D zone was equally as good. Toby Hopp played very well in in the nets — so across the board.”

Oh, and did we mention Maple Grove’s top line of Landen Gunderson, Finn Brink and Josh Giuliani — the engine that powers the whole thing — was at its high-revving best?

Brink had a first-period goal and Gunderson and Giuliani each scored in the second as Maple Grove (22-6-1) surged to a 3-1 lead. The trio has a combined 181 points.

Edina (20-9-0) had shut out its previous four opponents, including high-scoring Benilde-St. Margaret’s in the Section 6AA championship.

“I think it was just a quick start,” Brink, who scored 3:28 into the opening period, said about the secret to solving the Hornets’ defense. “Everybody's gonna be nervous coming into this game. Obviously we were, but we knew if we got pucks on the net early, they're gonna be nervous and we might get lucky, one might pop in.

“And we were able to score right away and then they kind of went back in their heels a little bit.”

As much as all parts and pieces of Maple Grove were plugged into place, Edina coach Curt Giles saw a disjointed Hornets defense for the first time in weeks.

“It has to be a team approach to those guys,” Giles said about slowing Maple Grove’s top unit. “You're not just gonna have one or two guys or one line shut down that line.”

Maple Grove opened the season on Nov. 26 with a 6-5 overtime loss to Edina. The Crimson surrendered a three-goal lead in the third.

“We said we weren't going to let down this time, and we didn’t,” Bergland said.

Giuliani scored his second goal into an empty net to clinch the victory. A pretty routine goal for a line that makes the extraordinary look ordinary.

“We work a lot on the simple parts of possessing the puck in the offensive zone, and and then they bring it 18 steps further,” Bergland said.

Brink said his line didn’t necessarily draw inspiration from the Prior Lake unit of Will Schumacher, Alex Bump and Sam Rice that produced all six goals for the Lakers in a 6-0 triumph over Cretin-Derham Hall earlier in the day. But they sure enjoyed the show.

“Well, it was definitely cool to see,” Brink said about Bump’s five-goal performance (Rice had the other goal). “But I don't know, we kind of just tried to stick to our own game plan and try not to worry about that game. But we’ll have shut them down next game if we want to win.” 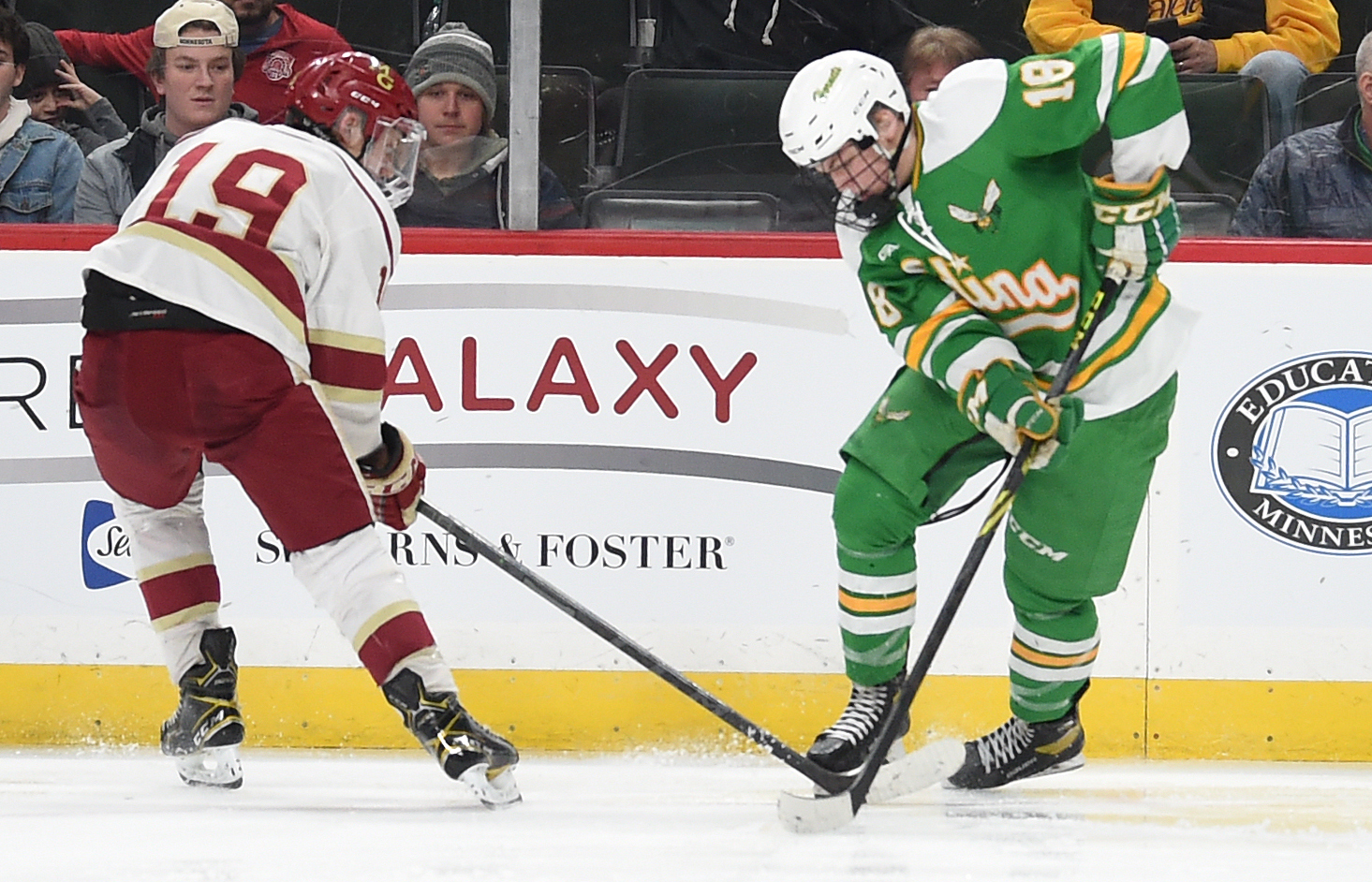