Prior Lake's Alex Bump has performance for the ages 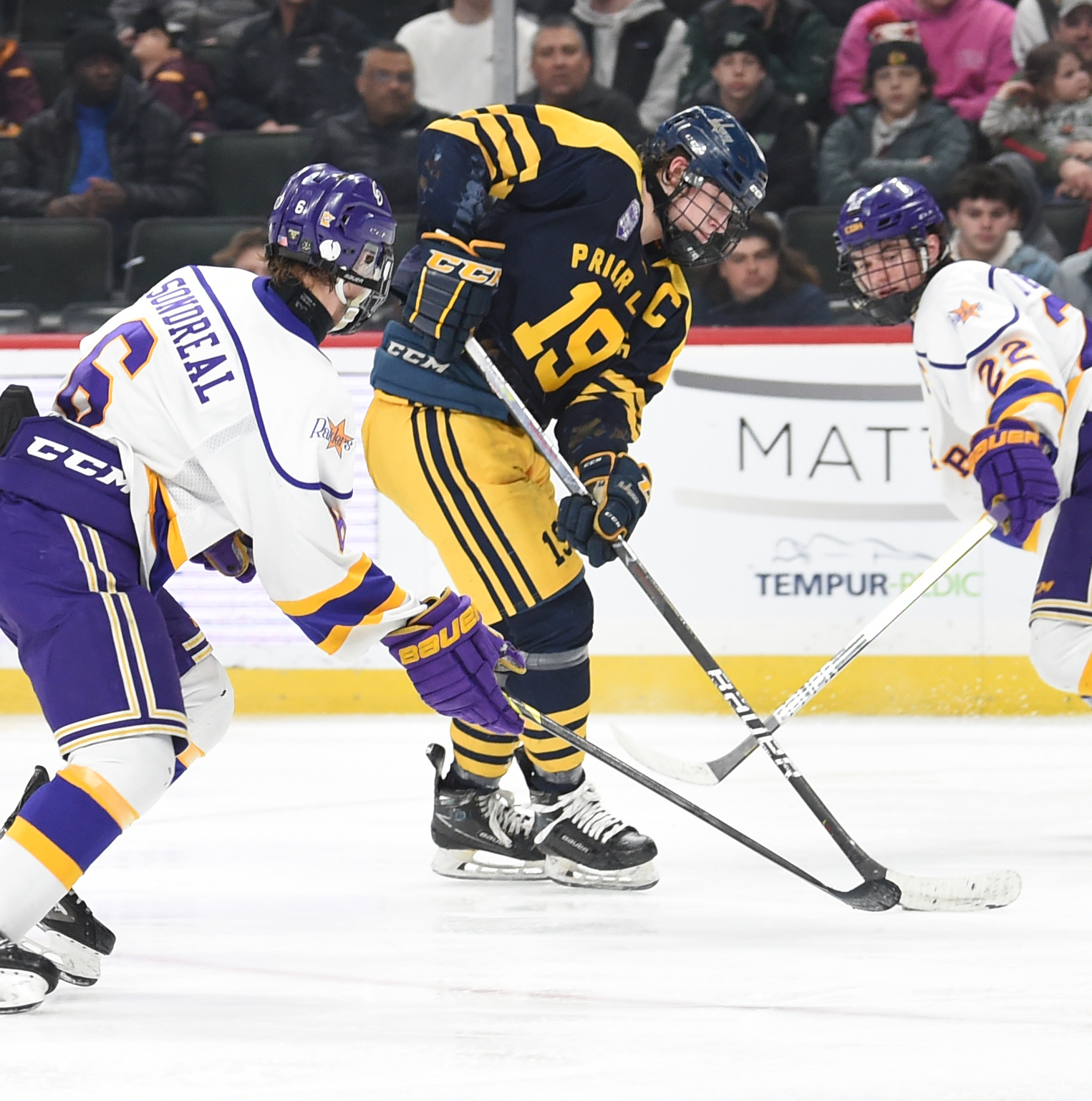 Prior Lake's Alex Bump had the puck on his stick a lot on Thursday, enough to score five goals in a state Class 2A quarterfinal victory over Cretin-Derham Hall. Photo by Helen Nelson

Prior Lake’s Alex Bump doesn’t remember Grant Besse’s five-goal performance in the 2012 state championship game. And he probably couldn’t tell you a lot about John Mayasich’s seven-goal game in the 1951 tourney.

But Bump, who scored a scintillating five goals Thursday in the unseeded Lakers’ 6-0 state Class 2A quarterfinal stunner at the Xcel Energy Center in St. Paul over the No. 2 seed Cretin-Derham Hall, most certainly brushed elbows with some of the event’s biggest icons with his performance.

And we aren’t just talking in literal terms. Bump and Mayasich, the Eveleth great whose name is plastered all over the state tournament record book, posed for a photo from deep in the Xcel Energy Center’s maze of tunnels Thursday, big smiles on both faces.

“We played against the best player in the state,” Cretin-Derham Hall coach Matt Funk said. “And he picked the best day to have his best game.

“I’ve been watching the state tournament for a long time. And that performance here today goes down as one of the best.”

Remakably, Mayasich’s seven goals didn’t seem that far out of reach when Bump scored his third goal with 2:43 still left in the opening period. After a scoreless second, the 6-foot, 200-pound Bump got rolling again in the third, scoring twice more — and adding an assist — to put the game in running time because of the six-goal margin.

“I wasn't thinking about scoring five goals at the beginning of the game,” said Bump, who has committed to play at Vermont. “They just kind of came. I got one. Got another. Had a hat trick in the first period. And then I just kept going.”

And there was no stopping him.

“He’s just like really hard to knock off the puck, really strong,” Cretin-Derham Hall’s Jake Sondreal said. “And his linemates do a really good job of complementing him as well. Sam Rice and (Will) Schumacher are both really good players, too.”

Bump scored his fourth goal in the third period after collecting a loose puck in the crease and firing a high shot past Cretin-Derham Hall goaltender Marko Belak. His fifth came on a quick shot off a 2-on-1 rush. The goal was Bump’s 46th of the season, the third most in the state and most of any player in Class 2A.

“The line has been so good,” Prior Lake coach Joe Pankratz said. “There aren't a lot of kids in high school hockey that can keep up with that skill level.”

Bump's most breathtaking goal might have been his second, when he used a power move to get to the net after wheeling past a Cretin-Derham Hall defenseman. He then shoveled the puck over Belak from close range.

All of Bump’s goals had an element of artistry to them.

“I equate his game to like a shark,” Funk said. “He just he sits out there and he waits for his moment. And when that moment comes, he's gonna pounce and make you pay.”

Bump said he isn’t worried about his instant fame affecting his game.

“We knew that we were going to be the team coming out of our section this year,” he said. “And we knew if we're going to make it to the state tournament, we're going to come here to win it. 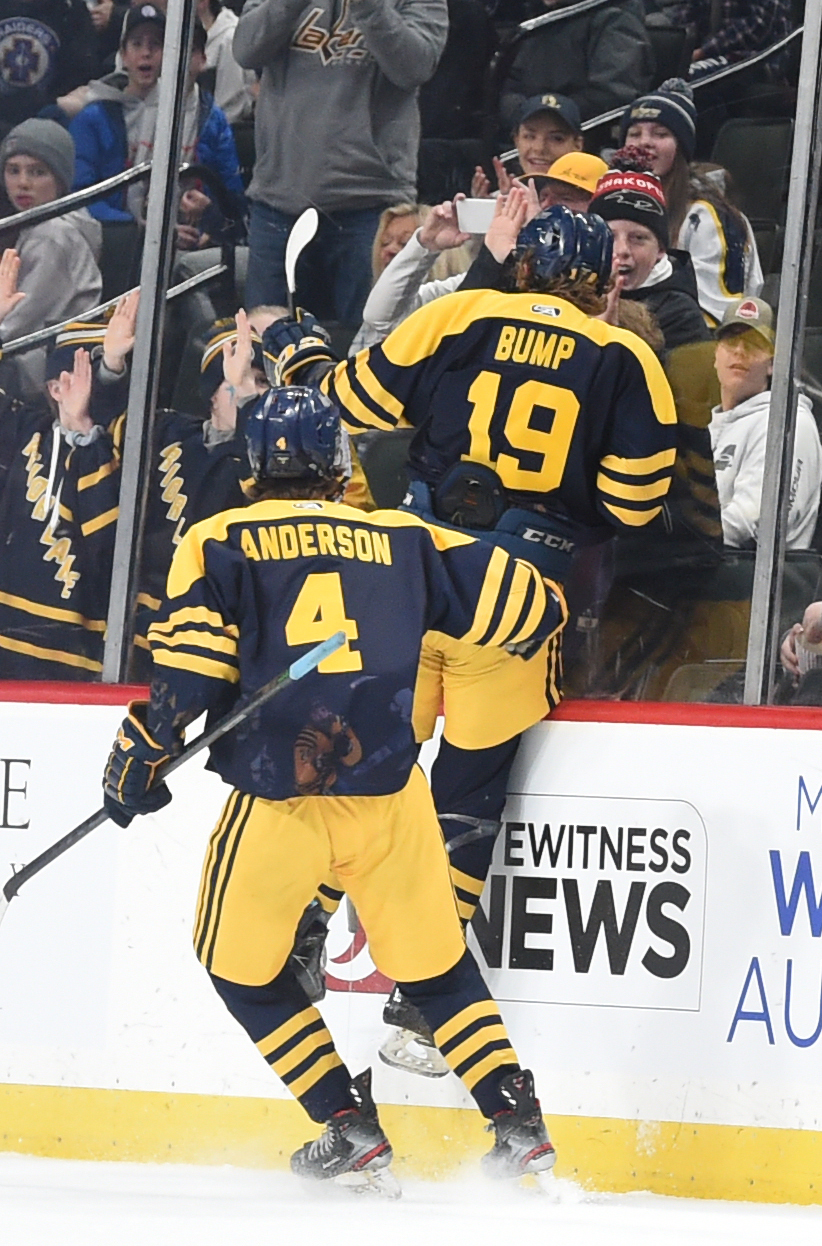 Alex Bump throws himself against the Xcel Energy Center glass during the first period of Thursday's 6-0 state Class 2A quarterfinal win over Cretin-Derham Hall. Bump scored five goals, including three in the first period. Photo by Helen Nelson

Alex Bump scored three first-period goals and added two more in the final period to propel unseeded Prior Lake past No. 2 seed Cretin-Derham Hall 6-0 Thursday in the quarterfinals of the state Class 2A tournament at the Xcel Energy Center in St. Paul.

Bump’s first goal came on a quick release of a shot from the high slot and the second on a power move to the net after wheeling past a Cretin-Derham Hall defenseman. His third goal sent a flurry of hats over the glass and onto the ice.

Bump scored his fourth goal in the third period after collecting a loose puck in the crease and firing a high shot past Cretin-Derham Hall goaltender Marko Belak. His fifth came on a quick shot off a 2-on-1 rush. The goal was Bump’s 46th of the season, the third most in the state and the most of any player in Class 2A.

A Vermont commit, Bump shared the wealth in the third period with a cross-ice pass that allowed Sam Rice to whip the puck into a mostly open net.

Bump entered the game as one of 10 Mr. Hockey finalists, and he rocket-boosted his candidacy with the dominant performance that also included a laser shot off the right post — among numerous other scoring chances — and drawing a penalty (after taking one himself) in the second period. The award’s winner will be announced Sunday.

Prior Lake (19-10-0) is making its first state tournament appearance. Cretin-Derham Hall (24-4-0), making its fourth trip, was the No. 1-ranked team in Class 2A in for much of the second half of the season.