State Class 1A quarterfinal: Confident Cardinals goalie Teagan Pfeffer puts on a show both on and off the ice 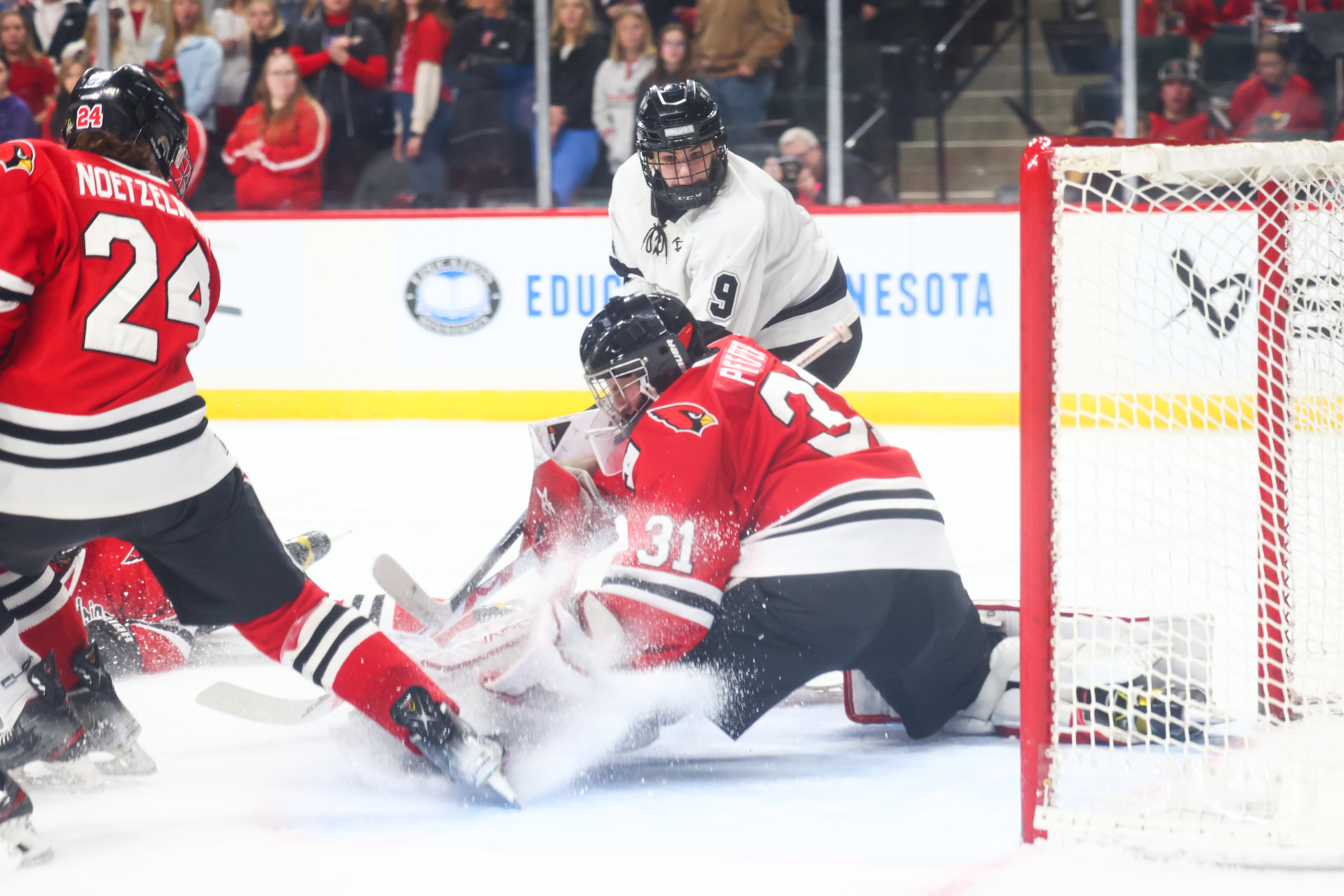 Alexandria's Teagan Pfeffer makes a save in front of Minneapolis' Jon Bebler during Wednesday night's state Class 1A quarterfinal at the Xcel Energy Center in St. Paul. Photo by Jeff Lawler

There’s a bit of bravado in Teagan Pfeffer.

And Pfeffer was feeling particularly sassy in the first period of Wednesday’s state Class 1A quarterfinal against Minneapolis, which had a huge contingent of fans, many of whom were  intent on needling the Alexandria goaltender.

“I winked at the them one time and (Minneapolis) ended up scoring like 30 seconds later,” Pfeffer said after the No. 5-seeded Cardinals upended No. 4 seed Minneapolis 4-1. “So I was like, ‘You know what, I’m not going to do that again. I’m just going to play hockey.’ ”

Pfeffer stopped 25 of 26 shots and was equally capable in the postgame media session, where he wasn’t shy saying what was on his mind.

On the Minneapolis fans:

“I love them they're cheering against me, you know. You look at them and they yell at me and stuff. I draw off that, I draw off their energy.”

On the Cardinals (20-6-2)  not having the brand name players to match No. 1 seed Hermantown, their semifinal opponent on Friday:

“I think we do have the big game guys, we just don’t have the coverage. We’re gonna show that the next few games. We got a ton of talent on our team, and we're gonna prove a lot of people wrong and a couple people right.”

At different points Pfeffer, a senior, had the media contingent roaring with laughter. But his game in the playoffs has been no joke — he’s allowed five goals in four starts.

“In all seriousness though, this guy showed up for us all playoffs,” Cardinals defenseman Pieter Mulder said. “He's kept us in a lot of games.”

Alexandria’s top line, which features Brycen Berg (two goals on Wednesday) and Josiah Gronholz, one assist, has been another big part of the Cardinals’ success.

“They put it in the net when they had their chances,” said Minneapolis coach Joe Dziedzic, who starred for the 1990 Minneapolis Edison squad. Edison, in 1994, was the last Minneapolis squad to reach the state tournament before this year.

“It feels like our little Cinderella story has kind of come to an end,” Dziedzic said about his 21-7-1 squad that now heads to the tournament's consolation round. “But you know, I can't say enough about what these guys have done. I think they've kind of helped change our culture of what it takes to be competitive — you have to work, you have to earn it.” 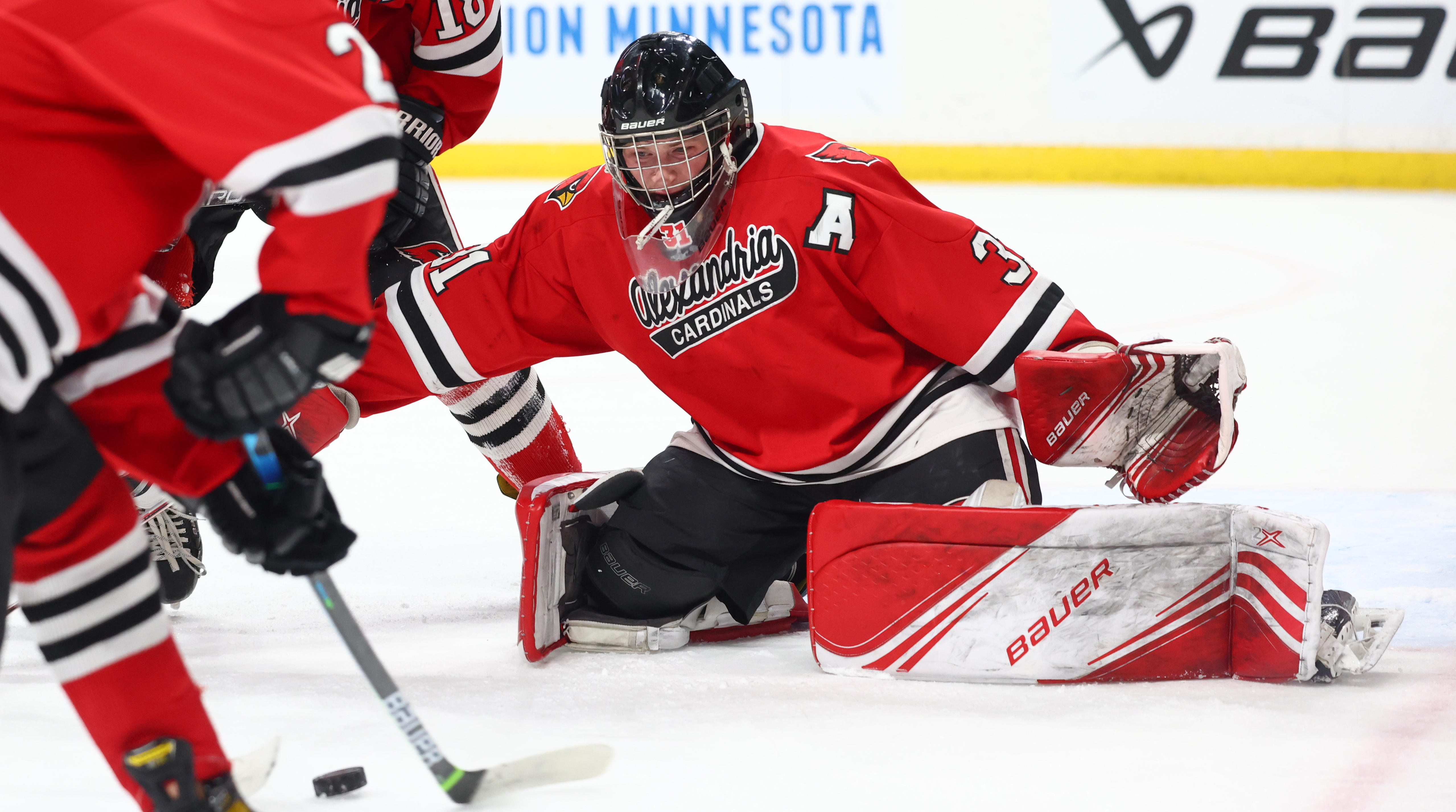 Senior goaltender Teagan Pfeffer made 25 saves on 26 shots against Minneapolis and was wildly entertaining in the postgame media session on Wednesday. Photo by Jeff Lawler

Brycen Berg scored twice and Teagan Pfeffer made 25 saves as No. 5 seed Alexandria beat No. 4 seed Minneapolis 4-1 on Wednesday in a state Class 1A quarterfinal at the Xcel Energy Center in St. Paul.

A huge crowd, including a robust student section all dressed in white, showed up to support Minneapolis, the first program from that city to make a state tournament appearance since  Minneapolis Edison in 1994.

Berg’s first goal came 2:31 into the first period and hushed the Minneapolis contingent until Zander Zoia tied it at 1-1 with 2:35 left in the first.

Berg’s two goals give him a team-best 29 on the season.

Gavin Olson and Joe Lamski scored in the third, with Lamski’s an empty-netter.

Pfeffer did his best work in the opening period when Minneapolis (21-7-1) outshot Alexandria 13-2. He finished with 25 saves. Minneapolis’ Alex Lamont stopped 15 of 18 shots.