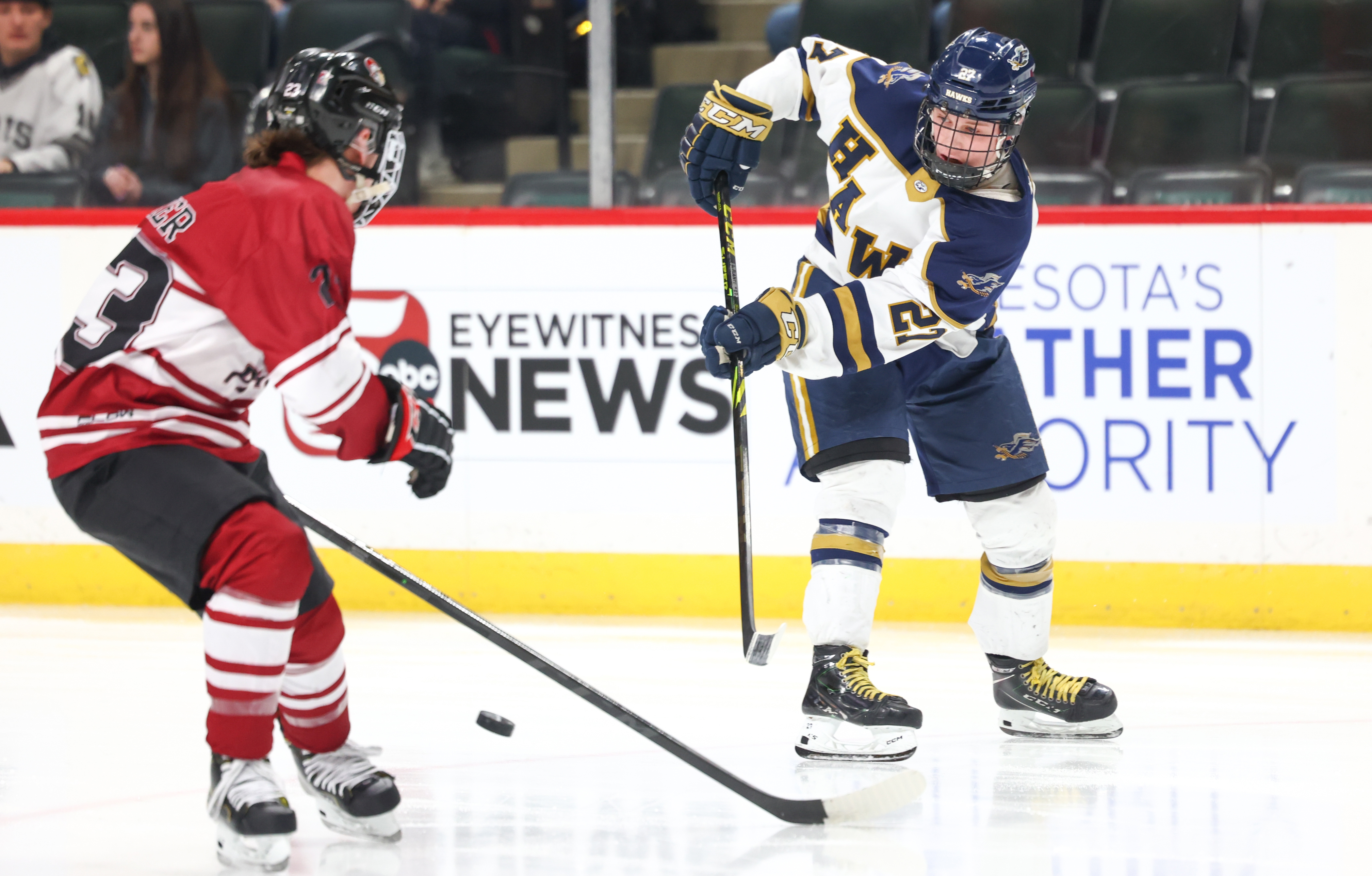 Hermantown's Zam Plante dishes a pass during the Hawks' 5-1 state Class 1A quarterfinal victory over New Prague on Wednesday. Photo by Jeff Lawler

The last time Hermantown’s Zam Plante hit the ice for a state quarterfinal he never left it.

OK, so Plante didn’t play the entire game against Dodge County last year, but his rest breaks could have been counted on one hand, minus a few fingers.

Plante’s ice time was much more limited, comparatively speaking, Wednesday in the No. 1 seed Hawks’ 5-1 victory over over unseeded New Prague in the third of four state Class 1A quarterfinals at the Xcel Energy Center in St. Paul.

Plante, who scored twice and had an assist, said he didn’t mind the extra time on the bench, although he did confess to having a throwback moment from that 7-3 loss to Dodge County in which he was one of just two Hawks varsity players allowed to suit up because of COVID-19 protocols.

“I did take too long a shift at the beginning of the second period,” Plante said.

And he heard about it form Hermantown coach Pat Andrews.

“They had a two-minute shift to start the second period,” Andrews said about his top line. “And then the next line went out and they wanted to play longer. And that's hockey, they’re kids, but it piggybacks. And it's not the right way to play.”

It’s hard for Andrews to be too mad for too long. He loves his players too much. Plus, the forward unit of Plante, a junior, his sophomore brother Max and junior Kade Kohanski is just too much fun to watch.

“They were unbelievable today, and everyone on the state stage got to see what they can do,” Andrews said. “Watching those guys and the things they do, it's amazing.”

No-look passes, behind-the-back passes, drop passes — name a type of pass, any pass — all are part of the wizardry for the Hawks’ top line.

Zam Plante’s first goal came in the middle of a three-goal flurry in the opening 3:01. He scored again midway through the opening period to put the Hawks up 4-0.

“We fought back, and we didn't give up,” said New Prague’s Will Anderson, who scored a power-play goal to make it 4-1 late in the first.“But, yeah, I mean, we all wish we could have gotten those first seven minutes back.”

The Trojans admitted to being a bit unnerved by bright lights and sheer size of the Xcel Energy Center.

“I don't know, it was just kind of weird being out there,” New Prague senior defenseman Charlie Turnberg said. “I’ve never played at a rink like this before. It’s a lot different than playing in our rink in New Prague.” 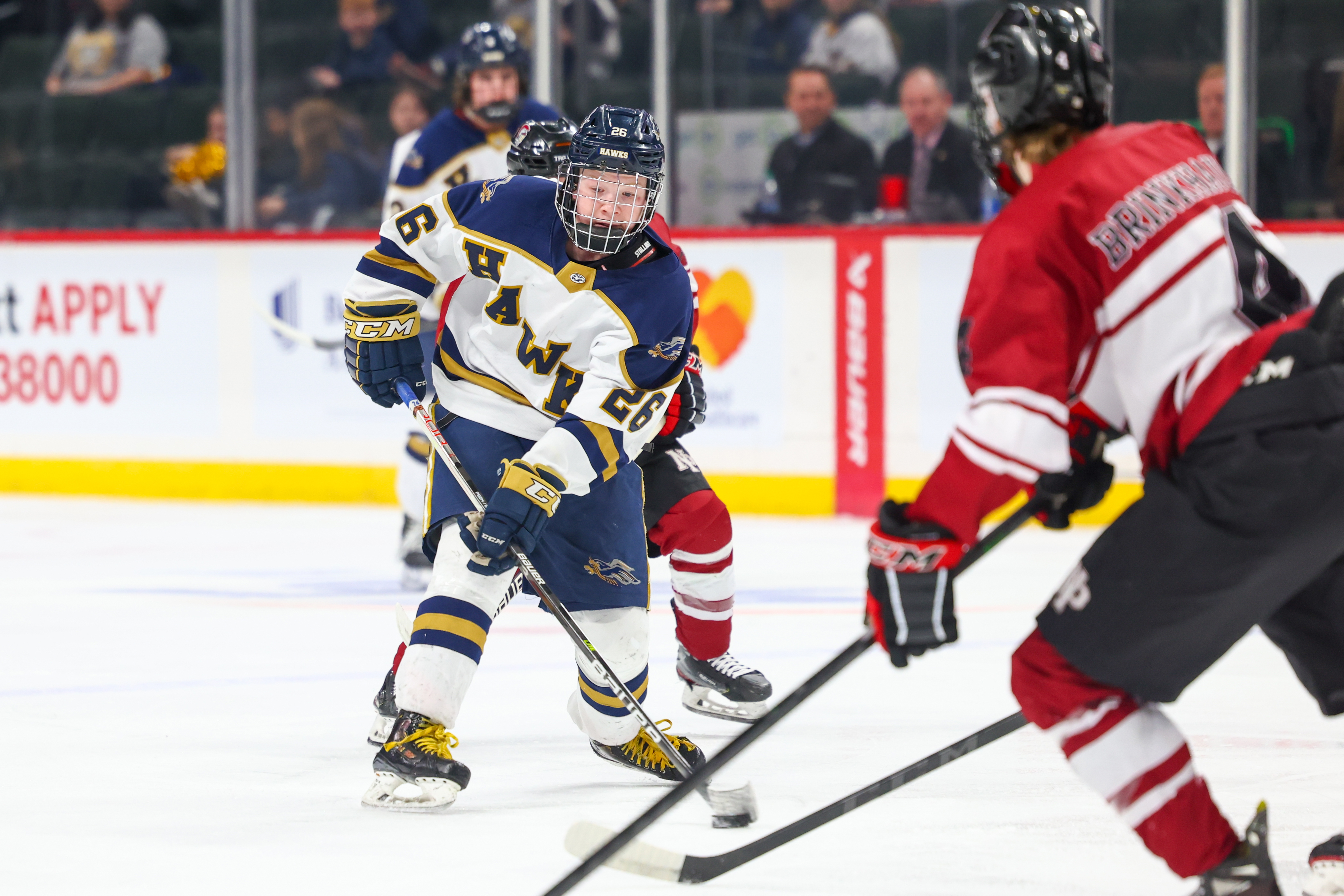 Hermantown's Max Plante scored a goal and added an assist on Wednesday against New Prague. Photo by Jeff Lawler

Junior foward Zam Plante scored twice and his younger brother Max, a sophomore, chipped in a goal as No. 1 seed Hermantown cruised to a 5-1 victory over New Prague on Wednesday in a state Class 1A quarterfinal at the Xcel Energy Center in St. Paul.

Zam Plante, a Minnesota Duluth commit, added another goal midway through the first, which ended with the Hawks leading 4-1. Will Anderson scored the New Prague goal.

Max Plante notched his goal 3:40 into the third period to complete the scoring.

New Prague mustered just five shots in the final two periods while allowing 30. Hermantown finished with a 50-13 advantage in shots on goal. Trojans goaltender Carter Puente stopped 42 of 47 shots before giving way to backup Oskar Pomerenke late in the third. 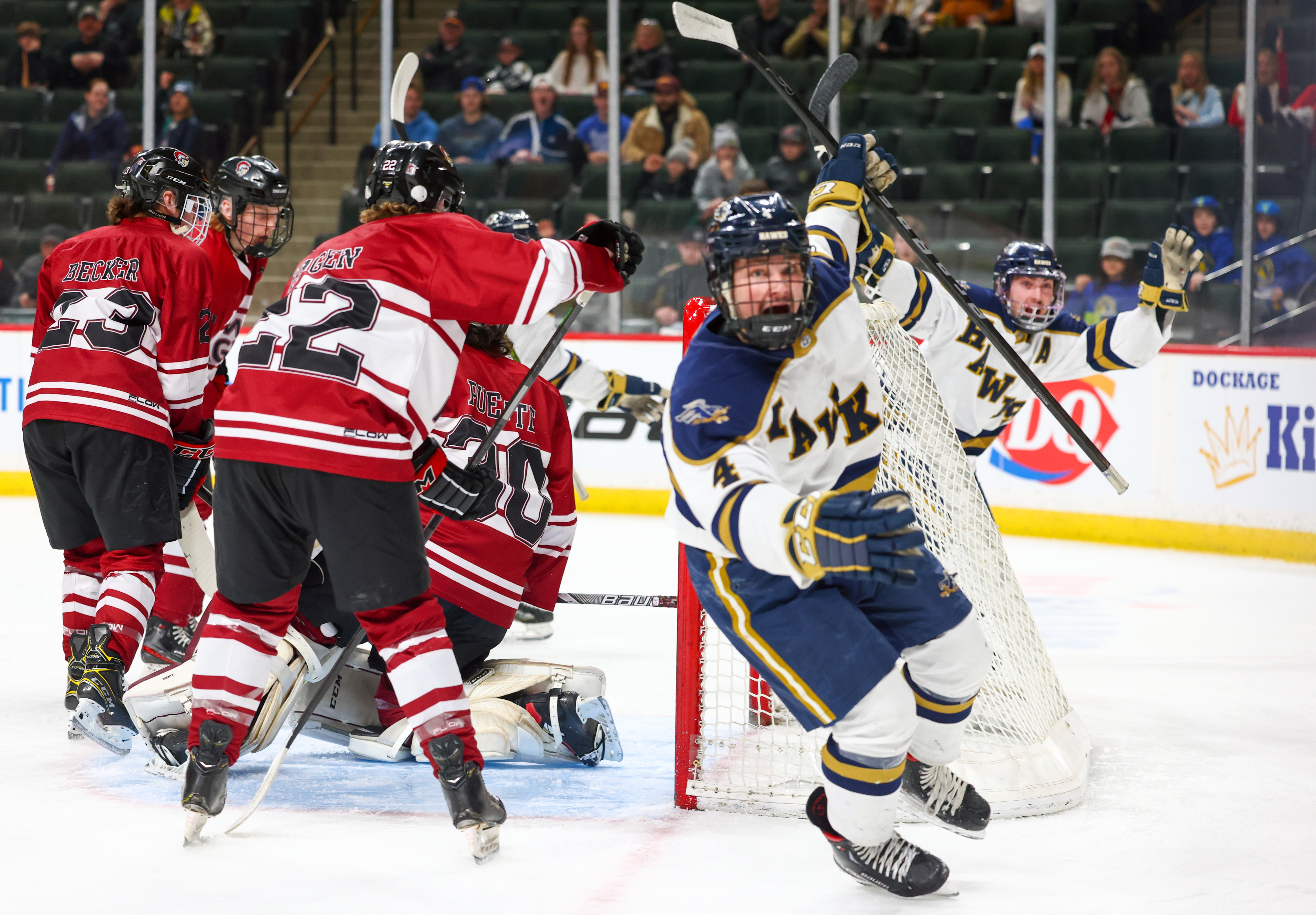 Hermantown's Wyatt Carlson celebrates after scoring a first-period goal against New Prague on Wednesday in a state Class 1A quarterfinal at the Xcel Energy Center in St. Paul. Photo by Jeff Lawler