Warroad's dynamic duo too much for Monticello 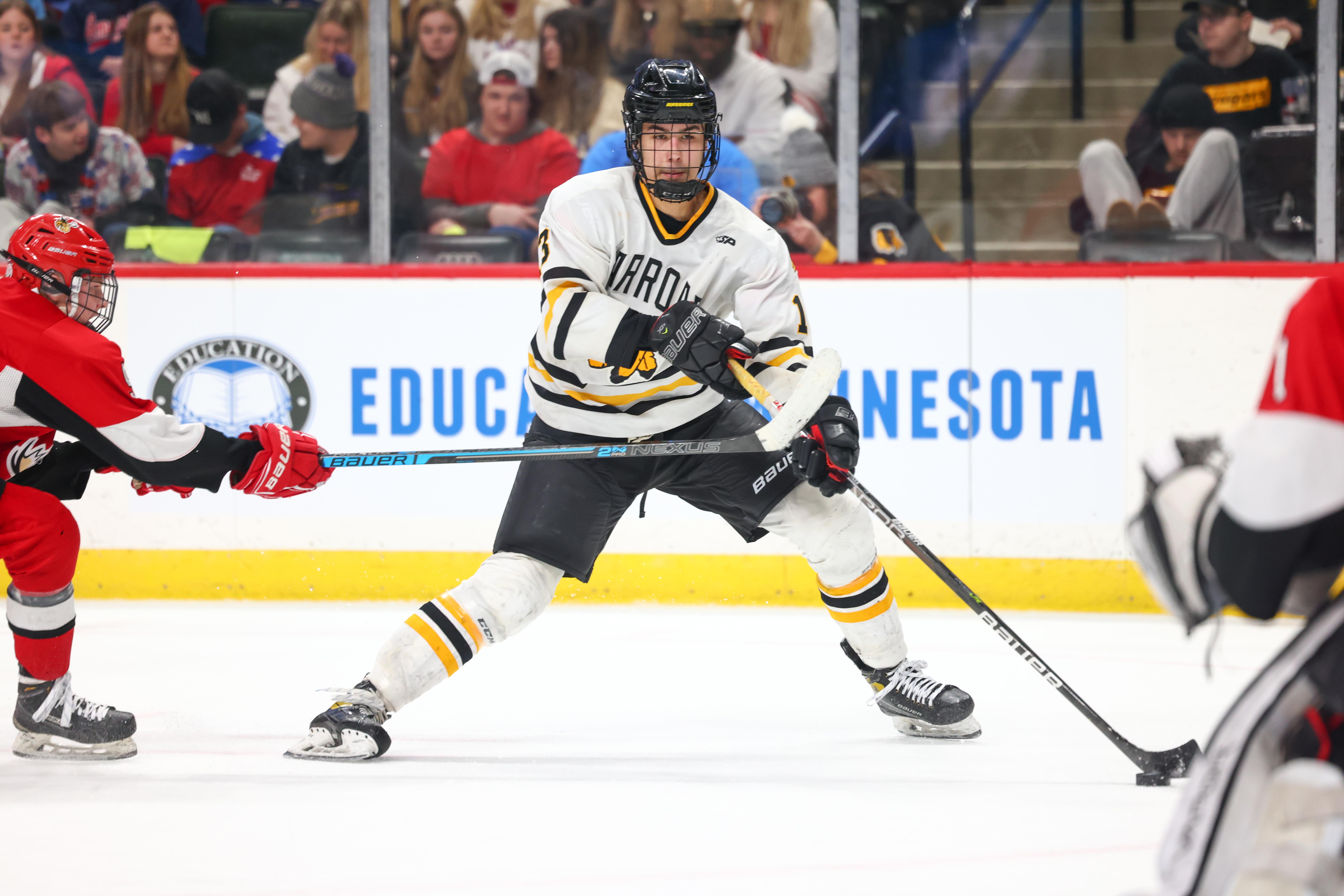 Jayson Shaugabay still remembers the day, as a Pee Wee, when he got the nod to play on a forward line with Daimon Gardner.

This was a big deal for the Warroad youngster, given that Gardner was already attracting feature story-attention from newspaper reporters and being featured on YouTube videos.

“He was the superstar, and I was a little kid on the team,” Shaugabay said after the duo combined for four goals and three assists Wednesday in the No. 2 seed Warriors’ 7-1 state Class 1A quarterfinal victory over unseeded Monticello at the Xcel Energy Center in St. Paul. “And I got put on a line with him and I was like, ‘OK, let’s go.’ And we got like eight points that game and we just kept going.

“And we still work in high school pretty well.”

It’s early, but Shaugabay put himself in at the front of the Understatement of the Tourney race with that last remark.

Gardner and Shaugabay sliced and diced the Moose with laser passes, successfully sending them through the sort of traffic jams in the slot you’d expect to see on Southern California freeway.

Gardner completed his hat trick on a feed from Shaugabay (who else?) in the third period to put Warroad (25-3-1) ahead 6-1. It was the Warriors’ sixth unanswered goal after Quintin Brooks had given Monticello (13-15-1) a 1-0 late in the first.

“They’re quick, they can handle the puck, they look one way and go the other,” Monticello forward Wilson Dahlheimer said. “They both are great players.”

“They have a great connection with each other,” Moose defenseman Gavin Simon said. “You can see it by the way they pass to each other. They know where each are, and that helps them set up in our zone and get great looks at the net.”

Shaugabay and Gardner scored 52 seconds apart early in the second period to turn a 2-1 lead into a 4-1 advantage. And Warroad was in control the rest of the way.

The start of this season was an extended reunion of sorts for the two stars, as Gardner, a Manitoba native, left Warroad after his youth playing days to play for junior-level teams in Canada and the U.S. His return late this fall was one of the state’s biggest preseason stories.

“I think like the first couple of games we were really kind of warming up to each other,” Gardner said. “And then after that we were kind of just winning all our battles and just feeding each other, setting each other up. So I think we have really good chemistry right now.” 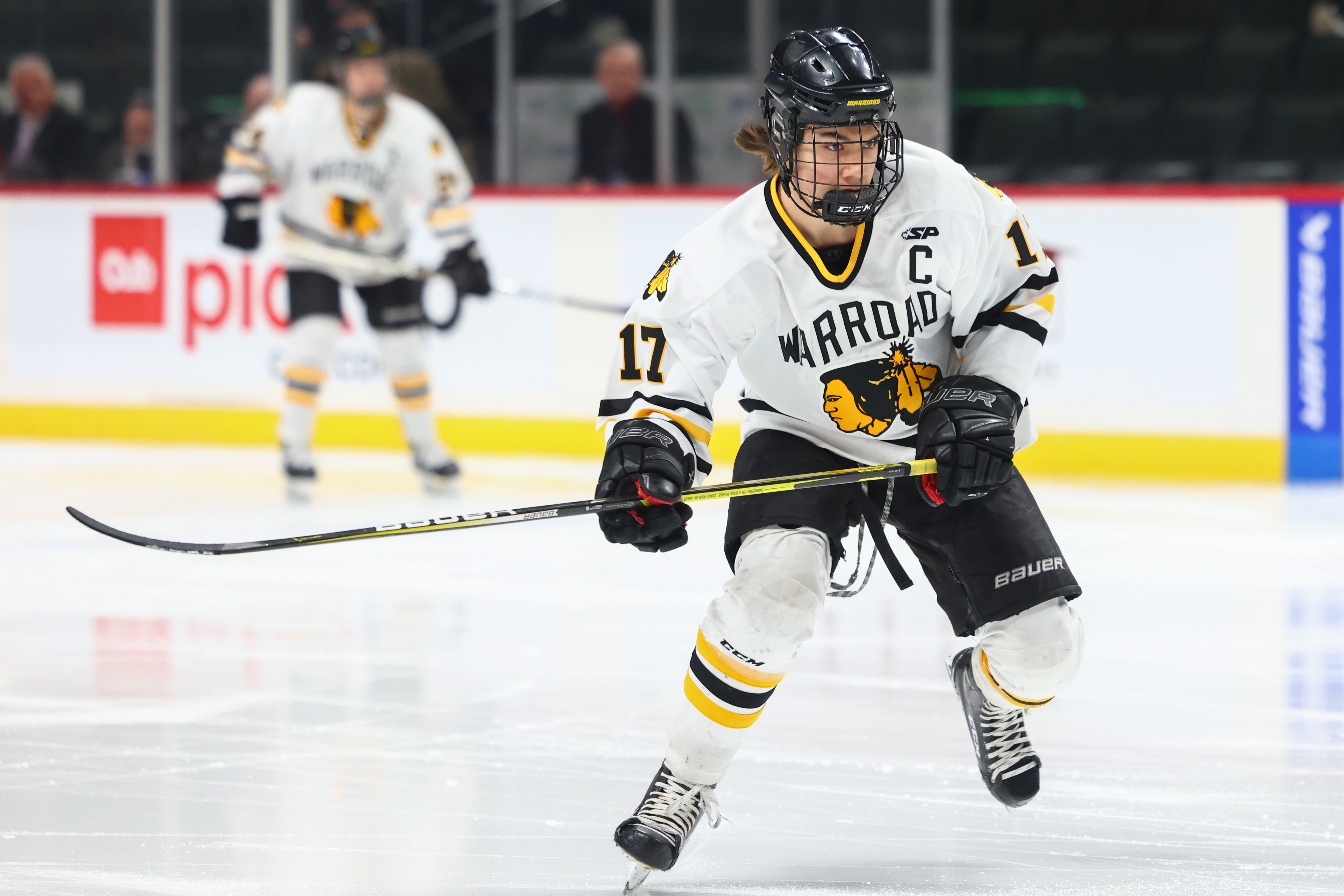 Jayson Shaugabay and Daimon Gardner scored 52 seconds apart in the second period to propel the No. 2-seeded Warriors to a 7-1 triumph over unseeded Monticello on Wednesday in a state Class 1A quarterfinal at the Xcel Energy Center in St. Paul.

Shaugabay, a junior, was awarded his goal, which put Warroad (25-3-1) ahead 3-1 early in the second, after video review determined the puck had crossed the goal line before Monticello (13-15-1) goalie Michael Biller could sweep it out of the net with his arm and stick.

Gardner, one of 10 Mr. Hockey finalists, then made it 4-1 and later put the Warriors ahead 6-1 with two more goals, giving him 42 this season. Shaugabay, who had a goal and two assists, has 77 points.

Pilgrim added a highlight-reel goal in the third, slipping the puck through a falling Monticello defender before beating Biller with deke on a solo rush. 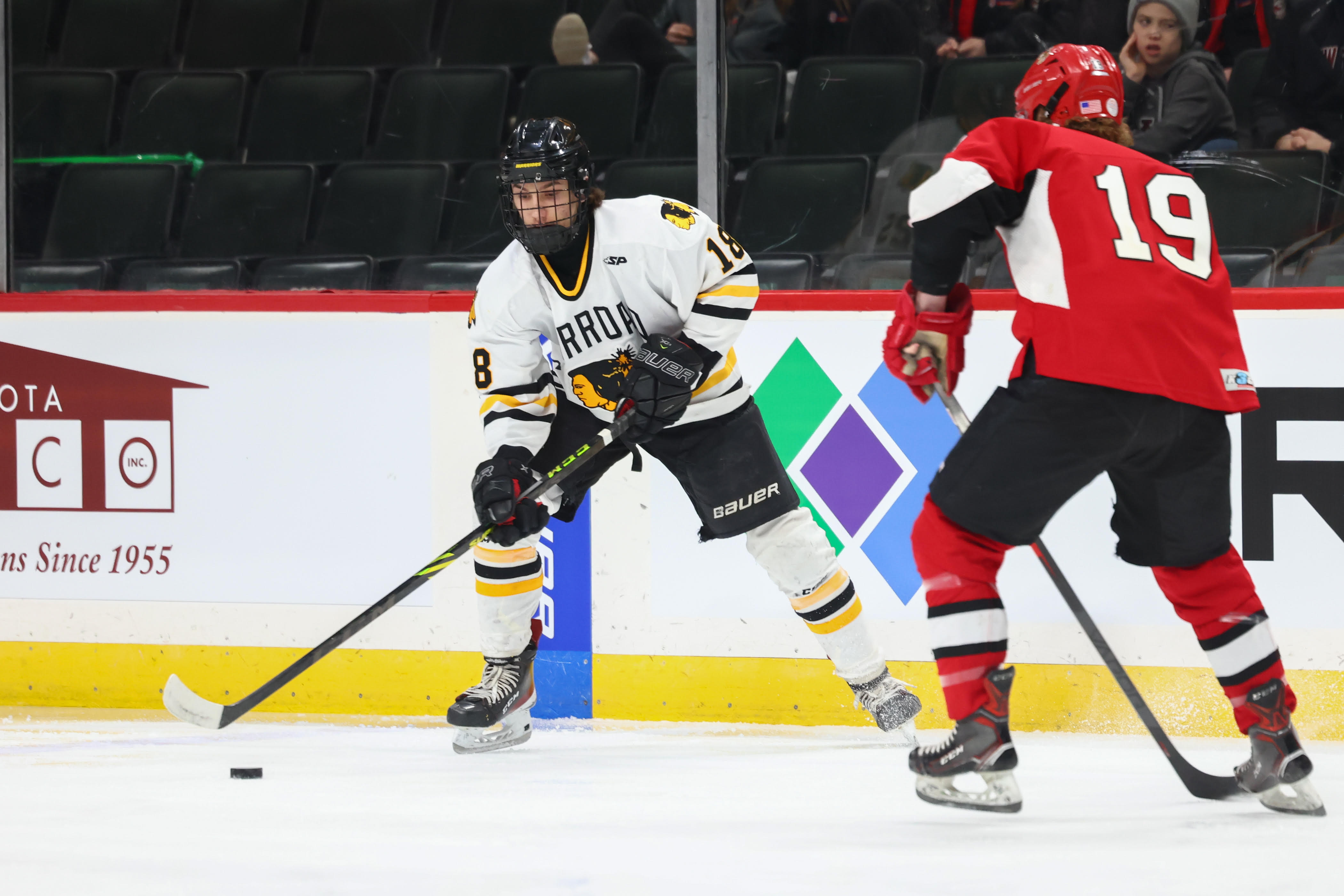