Maple Grove's Bennet Glad has nerves of steel, knack for rising to the occasion 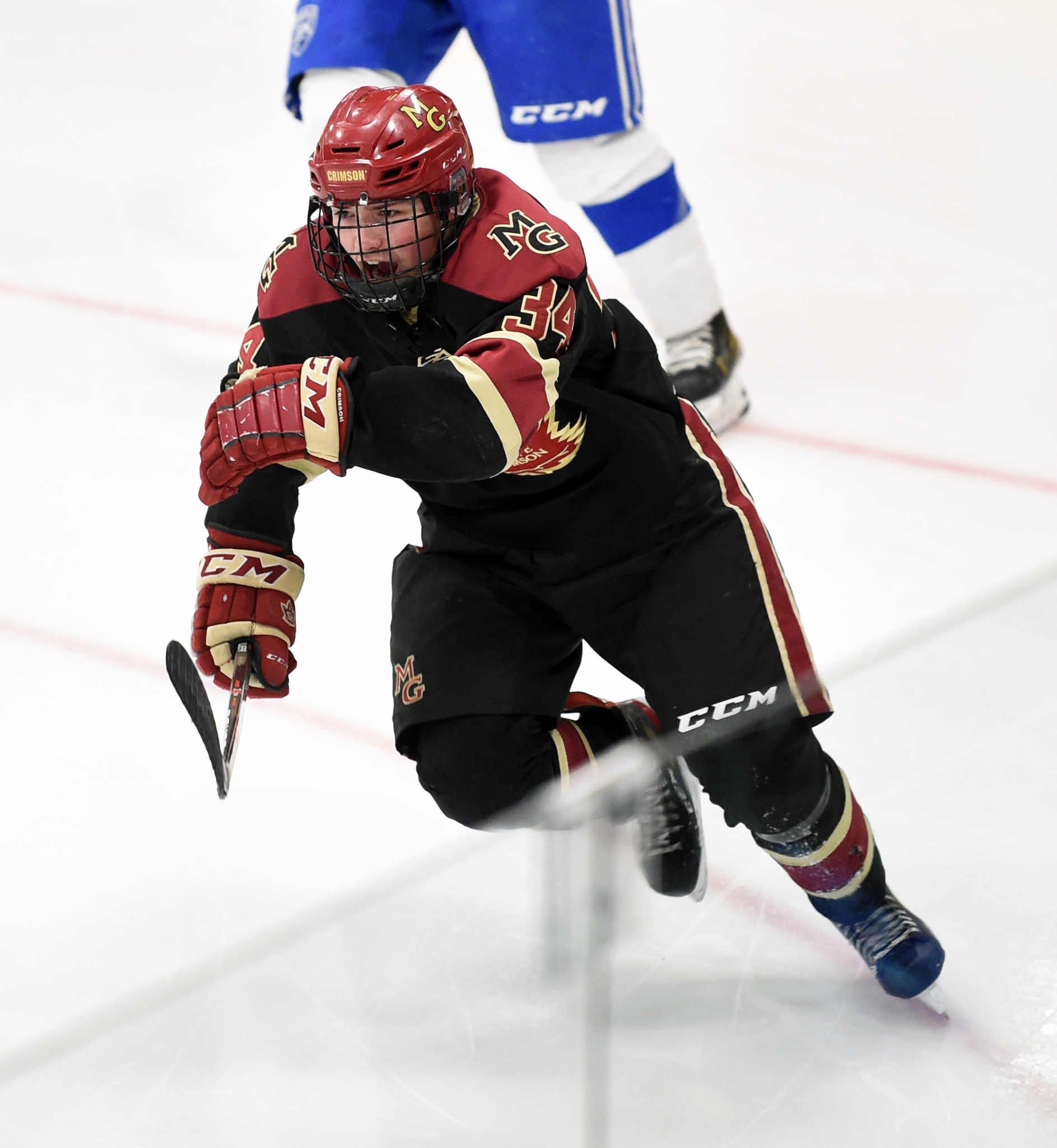 Bennet Glad is the sort of person who could stroll into raging bonfire and emerge, a few seconds later, with an ice cream cone in one hand and mango slushy in the other.

The Maple Grove senior is part hockey player, part magician when it comes to managing his decidedly chill demeanor, which ranges from unflappable to dead calm.

“I wish I had the nerves of steel that he has.” Maple Grove coach Todd Bergland said “I’m like, ‘Is there anything that phases you?’ He says, ‘Nah, I’m just going about doing my job.’ ”

Glad’s job is to pester and hit and bump and jostle opposing defenses into submission. As part of the Crimson’s highly effective Grind Line, Glad embraces his role in helping fire up his teammates with a timely hit or body-sacrificing blocked shot.

“We’re not the big point-getters, but we’re the grinders,” Glad said about his line that also includes Sawyer Skanson and Jack Kernan. “We grind to get the momentum going.”

The trio have scored a combined 19 goals this season, 49 less that the Crimson’s top unit of Landen Gunderson, Finn Brink and Josh Giuliani.

Glad strayed a bit beyond his normal role on Thursday, providing a clutch third-period goal to complete the scoring in the Crimson’s 4-2 Section 5AA championship victory over Rogers at a packed Furniture and Things Community Event Center in Elk River. Glad raced top speed from one end of the rink to the other, then flung himself high against the glass next to the Maple Grove’s toga-clad student section after scoring his fifth goal of the season.

“You know, this is probably one of the first times in a long time that we’ve had this, where you get to feel that energy (from the crowd),” Glad said, referencing last season’s COVID1-19 related crowd restrictions. “It’s just a blast.”

Or, was Glad’s high-energy celebration just a calculated tactic to fire up his teammates? You know, Glad, “Just going about doing his job.”

Either way, the Crimson had all the spark they would need to close out the victory and reach the state tournament for the third consecutive season.

Bergland said he wasn’t particularly surprised it was Glad, whose goal came 1:44 after Rogers, had pulled to within 3-2 on a Hogan Sinjem goal, who stepped up in the biggest of moments.

“I kind of expected him to score,” Bergland said. “I know it sounds goofy to say that. But he is a big-game player.”

Bergland said Glad was something of a revelation last season at the state tournament, when he scored a goal in a quarterfinal win over Andover, among other highlights.

“Last year when we were in the state tournament Bennett Glad just kind of came out of the woodwork,” Bergland said. “I’ll tell you, he stepped up and he lit a lot of eyes up."

Don't be surprised if the 5-foot-8 Glad, whose heart seenubgkt makes up most of his 170 pounds, has a major impact on the No. 3 seed Crimson's quarterfinal matchup against unseeded Edina at 1 p.m. Thursday at the Xcel Energy Center in St. Paul.

“You're not gonna find a kid that works harder," Bergland said. "He's just tenacious. He's constantly trying to think of ways to improve his game.” 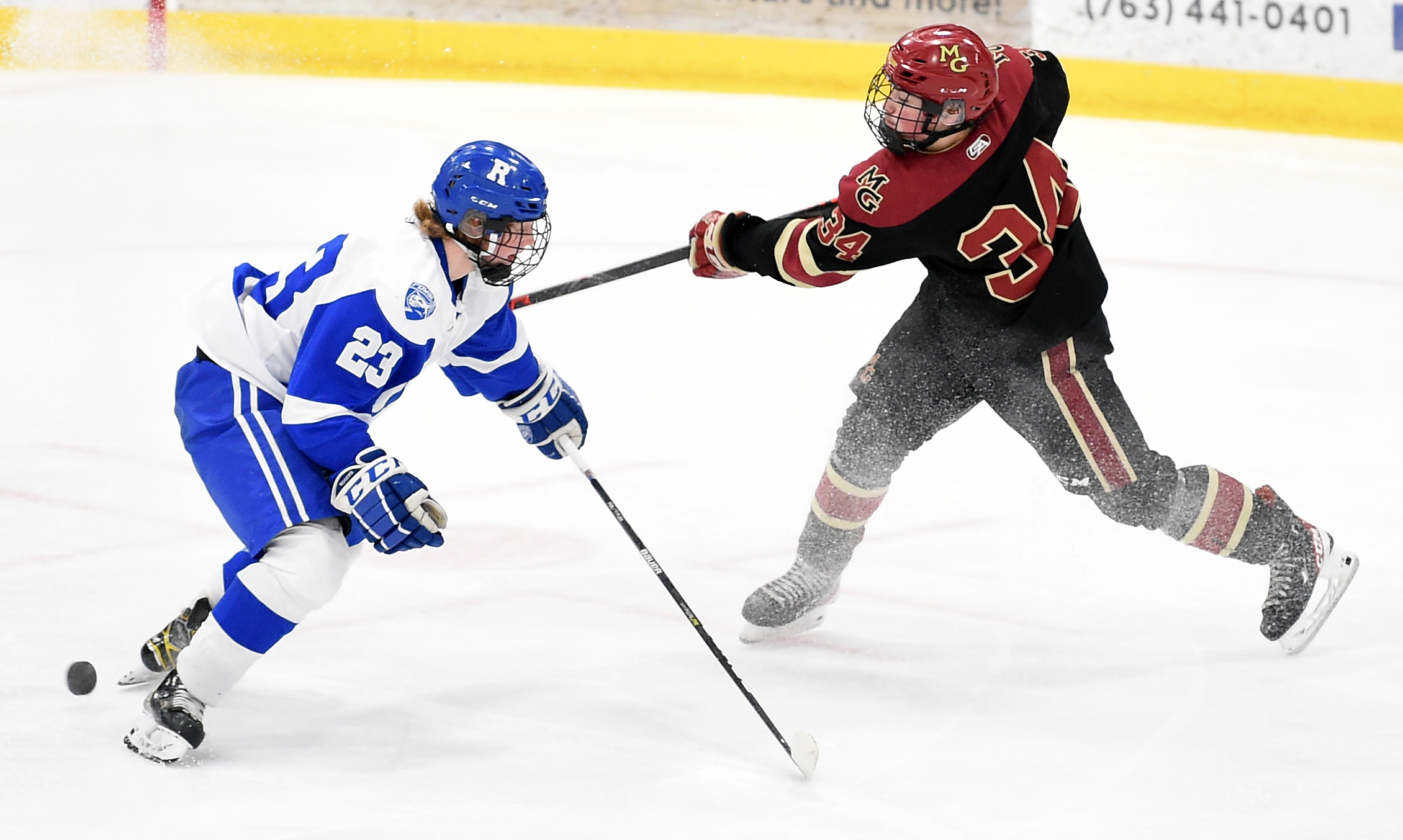