Friends 'Til the End 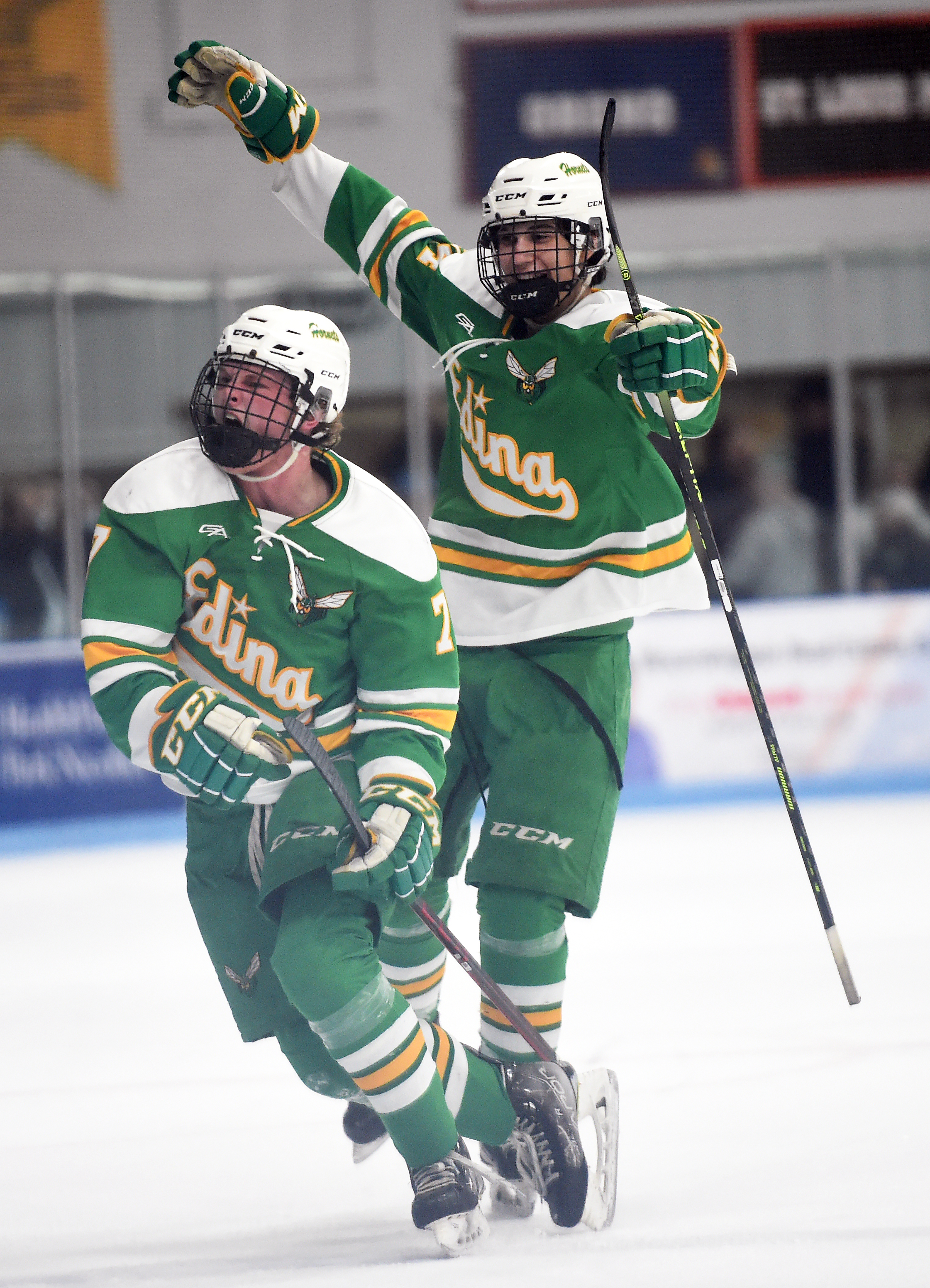 Edina’s Caden Morgan was all fired up.

And by fired up we mean veins-popping-in-the-neck fired up. Eyes as big as hockey pucks fired up. Screams of joy registering at higher decibels than a Metallica concert fired up.

To say Morgan was highly engaged in Wednesday’s Section 6AA championship game against Benilde-St. Margaret’s at a packed Bloomington Ice Garden would be to note the obvious, like pointing out that lions enjoy dining on fresh meat.

Morgan’s first-period goal against the No. 1 seed Red Knights opened the scoring and proved to be the winner in a 4-0 triumph that sends the No. 2 seed Hornets, state Class 2A champions in 2019, back to the state tournament after a two-year hiatus. The goal was Morgan’s third of the season, a precipitous drop from the seven he scored in nine fewer games last season for Breck.

Not that junior defenseman worries much about scoring totals. At least not his own. The shutout was Edina’s fourth in as many games and points to a team-wide commitment to playing a suffocating, shutdown style.

“I think we've got the whole team bought into the system at this point,” Morgan said. “And it shows. We have a lot of confidence on defense with Robbie (Clarkowski) back there in net. He's been amazing. So we can't ask for much more as defensemen.”

Clarkowski, a 6-foot-6 junior, made 19 saves against the No. 7-2A Red Knights. He hasn’t allowed a goal since a 5-1 win over St. Michael-Albertville on Feb. 17, when the Knights scored in the first period. Which means Edina’s shutout streak sits at 15-plus periods (counting an abbreviated overtime period in a section semifinal win over Wayzata), a stretch that adds up to 234 minutes, 59 seconds.

Morgan, who also had an assist in Wednesday’s victory, pairs with Henry Whittlef to form one of the Hornets’ dominating defensive duos.

“He came in and he's been a big help on the back end,” senior forward Trey Fechko said. “He got us going tonight, and we couldn't be happier to have him on squad.”

Fechko, the Hornets’ leading scorer, played four seasons at Holy Family Catholic before transferring to Edina before last season. He has welcomed Morgan, in part, through their epic ping pong battles in the locker room. And it was Fechko who was screaming words of encouragement into Morgan’s facemask after the opening goal Wednesday.

“Fech and I are good friends,” said Morgan, who grew up playing in the Edina youth hockey system. “We've got a big ping pong rivalry that goes way back.

“I mean, it's obviously hard when you feel like you might not like fit in right away. But all the boys have been just as welcoming as him.”

Benilde-St. Margaret’s (22-6-0) never got its high-speed, swashbuckling offense rolling against No. 9-2A Edina (20-8-0), which also deployed the highly effective defense tandem of Wyatt Wurst and Eddie Revenig. And with the Hornets’ forwards committed to defense-first approach, the Red Knights’ quality scoring chances were limited to a handful — or less.

“We could never settle into our offense,” Red Knights coach Ken Pauly said. “We looked like a team fighting for an identity tonight.” 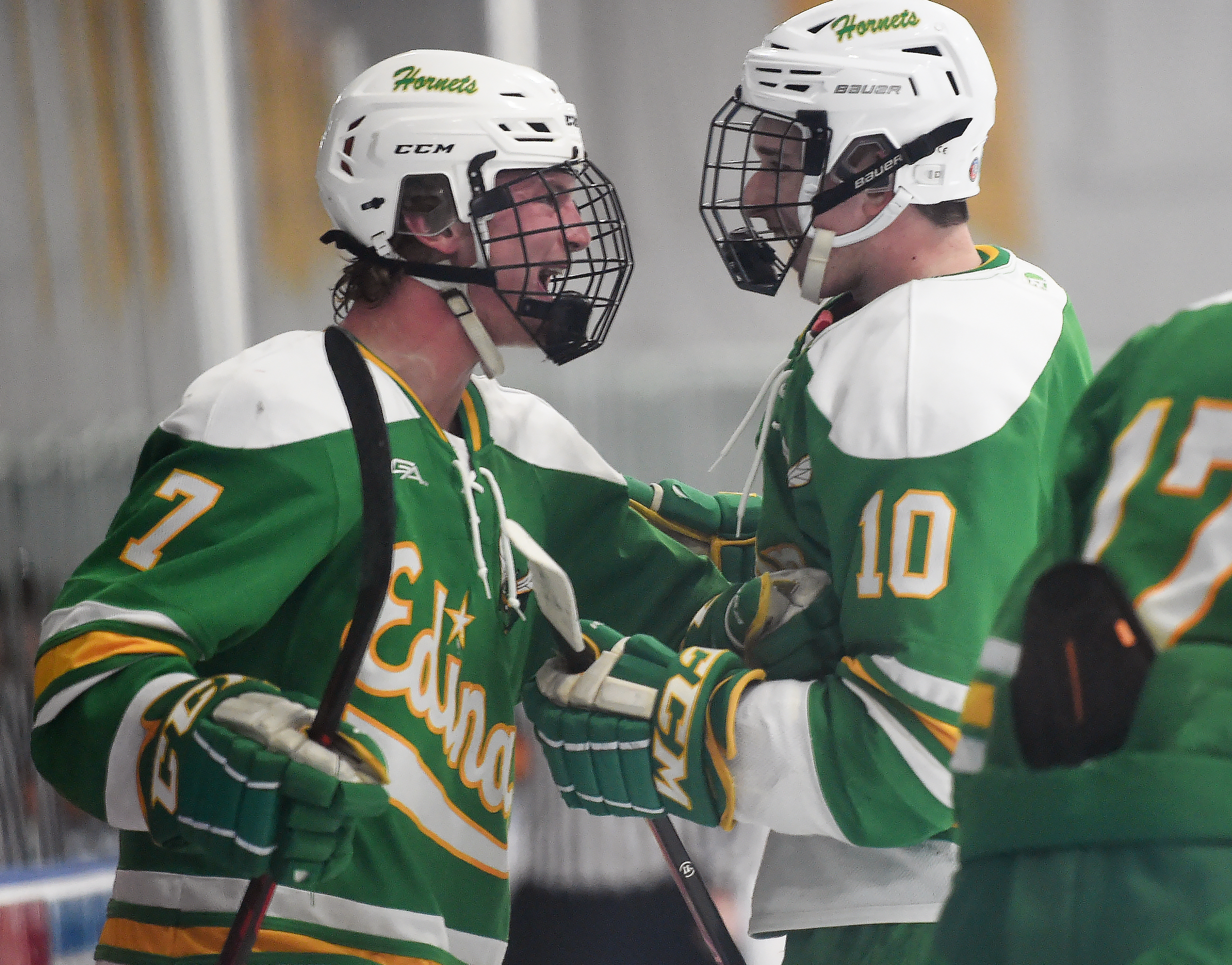 Caden Morgan, left, and Trey Fechko both transferred into the Edina program after playing for private schools. Photo by Loren Nelson, LegacyHockeyPhotography.com