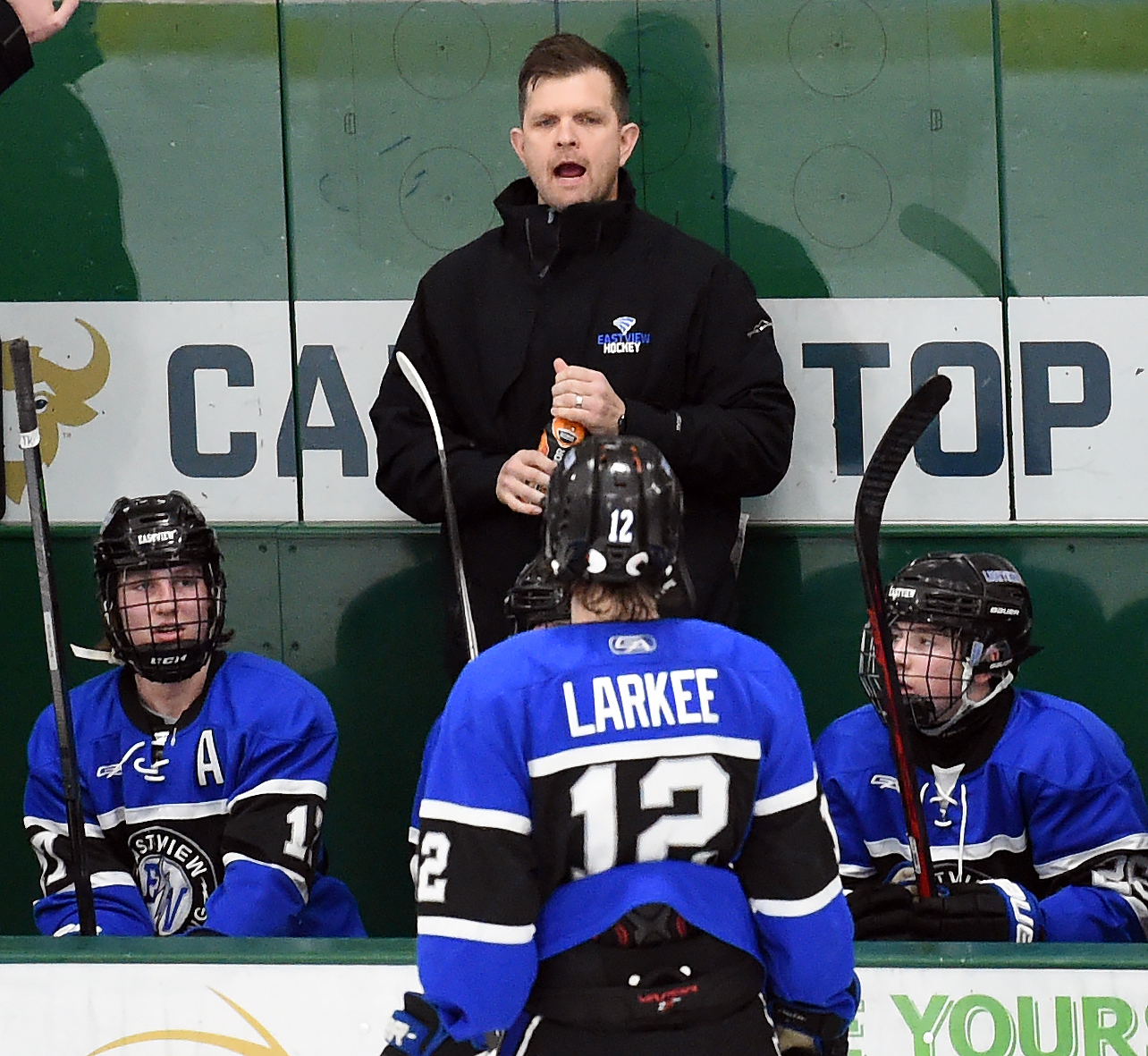 Second-year Eastview coach Aaron Fulton has guided the Lightning to a 17-10-0 record and first section championship appearance since 2018. Photo by Loren Nelson, LegacyHockeyPhotography.com

Rankings get a bit tricky (i.e. impossible) this time of the year.

We’ve reached the section semifinals stage of the playoffs for all but two sections, and several top-20 teams in both classes have been knocked out. Most notable among the casualties is Wayzata, which began the week at No. 11 in Class 2A and lost 1-0 in overtime to No. 10-2A Edina in a Section 6AA semifinal.

So now what for the Trojans, who are undoubtedly a top-20 team despite their season having come to an abrupt close? We slotted them at No. 13.

And, conversely, what to do with Eastview? The Lightning have 10 losses and never cracked the top 20 in the regular season, yet they knocked off No. 18 St. Thomas Academy 2-1 in double overtime (their second win over the Cadets this season) in a Section 3AA semifinal on Friday. Eastview (17-10-0) also has a quality win over Minnetonka along with triumphs this season over Prior Lake and White Bear Lake, two teams still alive in the playoffs.

The Lightning, from unranked to No. 15 this week, deploy a suffocating defensive style not unlike, say, Wayzata, Edina or No. 2 Hill-Murray.

“We know we’ve got to play a five-guy game on the ice,” Eastview coach Aaron Fulton said after Friday’s victory over St. Thomas Academy. “And when we do that, with our goaltender (junior Jay Svaren), we’re tough to beat. So we just preach being hard to play against every single time we're on the ice.”

Class 1A is even more undecipherable past the top eight or nine teams. No. 1 seeds Little Falls and Northfield were ousted in section semifinals and took precipitous drops in the top 20. And we brought in six previously unranked teams — all of them still alive in the playoffs — into the fold. Call it a reward for playing this deep into February.

Among the newcomers is No. 19-1A New Prague, a nine-win team and No. 4 seed in Class 1A that has benefitted in the postseason from playing a schedule heavy on Class 2A opponents.