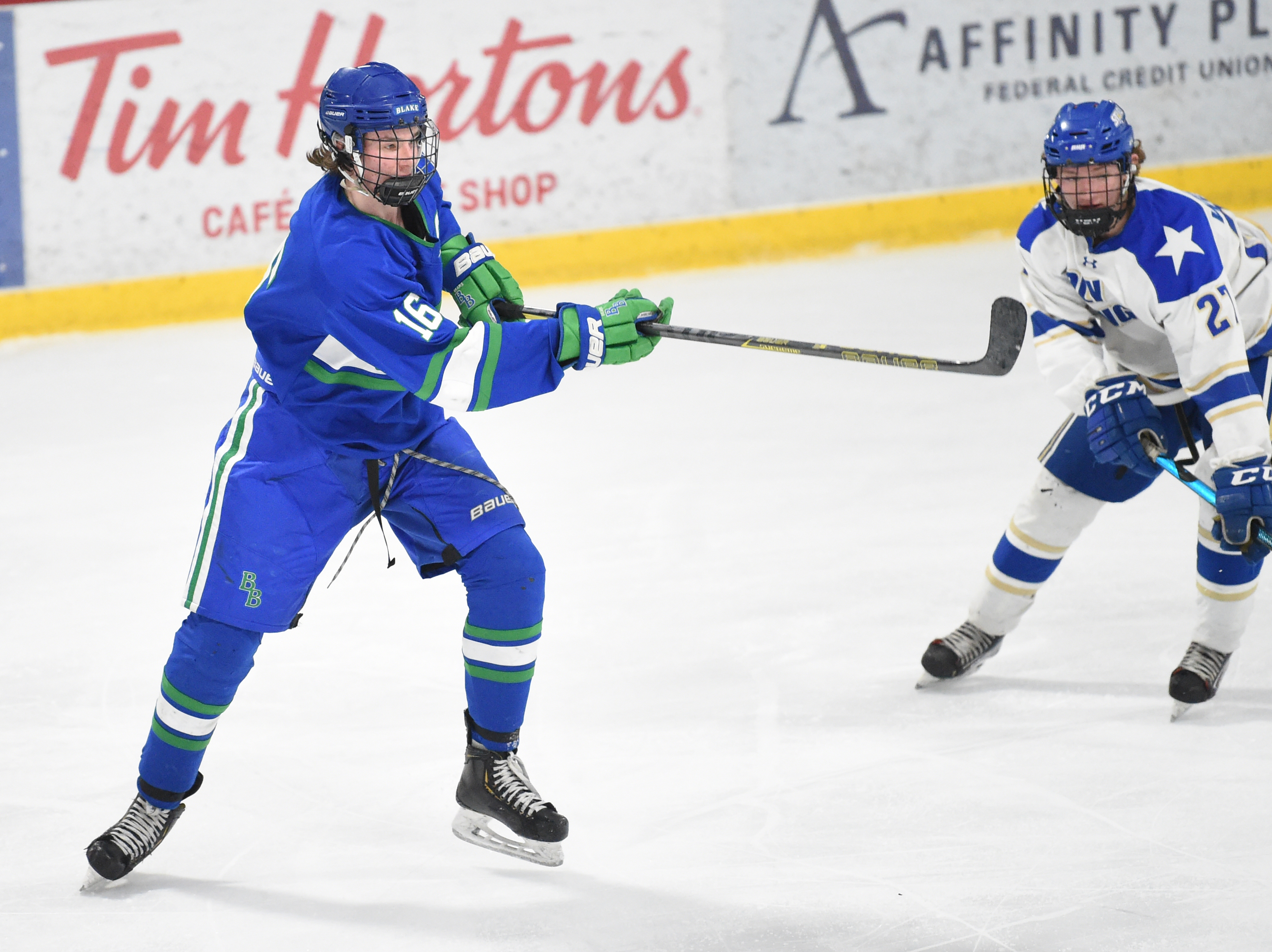 And, when performing at peak efficiency, more effective.

Think of the 5-foot-10, 150-pound Matzke as a 1960s muscle car packaged in breezers and shoulder pads. His quickness off the line is eye-blurring. His top speed borders on ludicrous.

The 6-foot-6 Krenke is more of a jumbo jet draped in a blue and green Bears jersey. His wingspan stretches from here to eternity. And when Krenke has the puck and body position, good luck trying to get it away from him.

“When I go against him in practice I can't do anything,” said Matzke, a senior who leads No. 5 seed Blake against No. 1 seed Benilde-St. Margaret’s at 3 p.m. today in a Section 6AA semifinal at the Bloomington Ice Garden. “He just protects the puck and uses his body well. It’s impossible to get it away from him.”

Matzke and Krenke played key roles in Blake’s 5-1 section quarterfinal victory over No. 4 seed Holy Angels on Thursday. Matzke’s speed was noticeable from the start, and he twice wheeled around the Stars’ defense on early dashes to the net. The second time he used a head fake to freeze Holy Angels goaltender Bryce Hess, then skidded the puck into an empty net for a first-period goal that opened the scoring.

Matzke barely raised his arms after scoring — staying as emotionless as a paid assassin. Krenke, in contrast, looked as though he was throwing a frat party in the second period when he scored twice, both times throwing himself high against the glass as a raucous Blake student section went bonkers on the other side.

Krenke, flashing a piano-key grin, caught some serious air on his joyous leaps. While his vertical game appears strong, he says he’s never had time for much basketball. Hockey is the game he’s thrown all his time and energy into, and it’s shown.

“Yeah, hockey is a big part of my life,” Krenke said. “And I don't want to stop anytime soon. So the goal is to keep progressing.”

“He's improved every aspect of his game over the last several years,” Blake coach Rob McClanahan said. “We've seen the results of it. His upside is huge.”

Krenke leads the Bears with 21 goals and 38 points. Matzke’s goal was his 12th of the season. The Thunderbolt and Lightning duio (ode to the 1970s movie starring Clint Eastwood and Jeff Bridges) duo have been unleashed somewhat as of late as McClanahan has abandoned his favored weaving, regrouping, cycling offense for a more straightforward attack. A style that seems well suited for both Matzke’s wheels and Krenke’s smash-and-grab approach.

“It’s than the way I've had our teams play in the past,” said McClanahan, who led the Bears to the state Class 2A tournament in 2020. “It's a little, I don't want to say it's simpler, but it's just it's more north-south.” 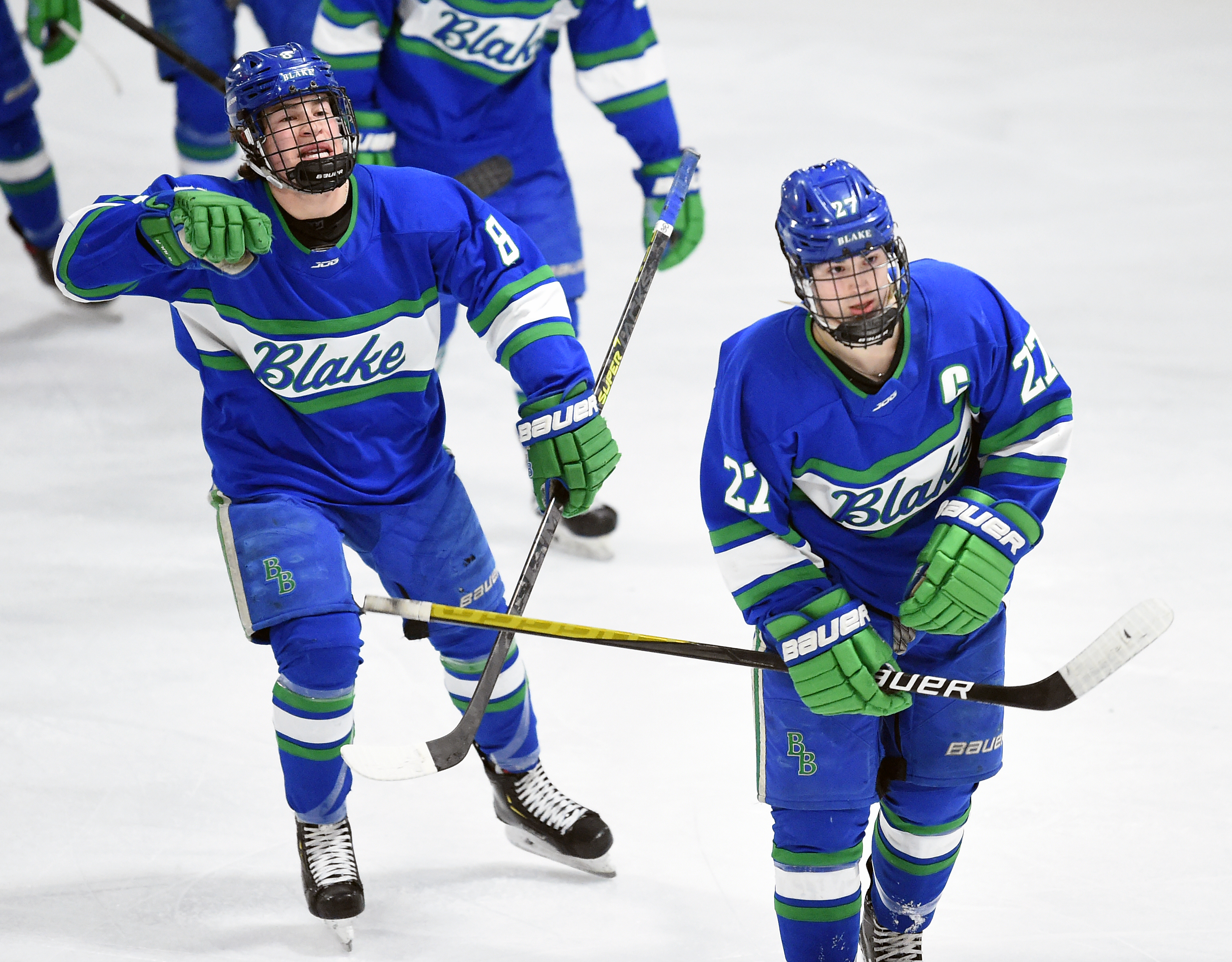