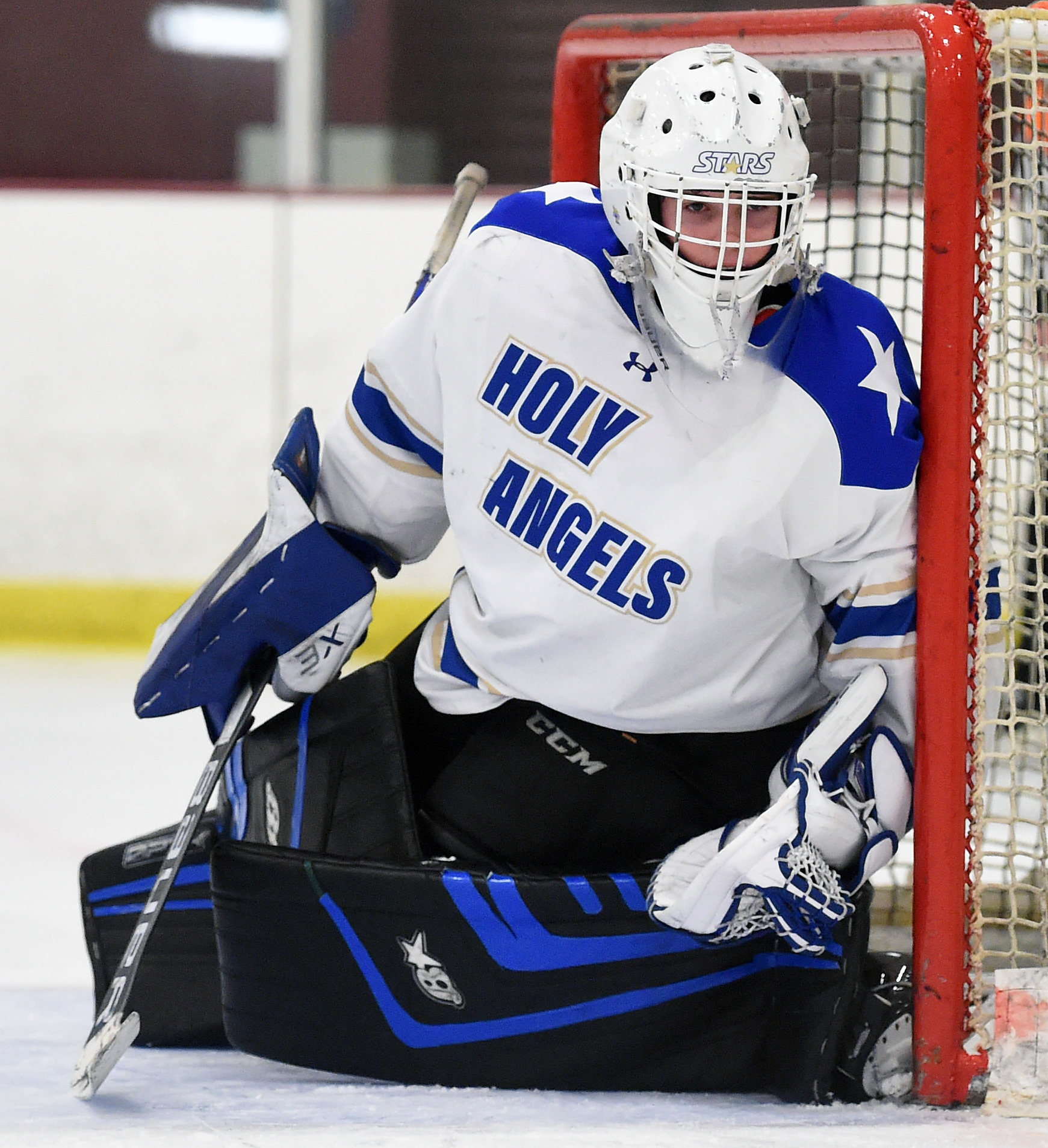 Senior Bryce Hess has started every game for Holy Angels this season, compiling a 21-3-1 record. Photo by Loren Nelson, LegacyHockeyPhotography.com

Bryce Hess thoroughly enjoys celebrating victories with his Holy Angels teammates. But not before the senior goaltender first handles a vital piece of postgame business.

Once the final horn sounds, a standard part of Hess’ routine is to bypass the mob of hugging and high-fiving Stars teammates (Holy Angels has lost just three of its 25 games this season) and seek out the opposing goalie.

Hess has a strong sense of kinship with his fellow netminders, and he enjoys sharing a few words with them after the games.

“It just speaks to the type of guy he is,” Holy Angels senior forward Carter Hermanson said. “Every game he’ll go up and tell the other other goalie … I don’t know what they say, I assume it’s good.”

Hermanson knows the calm, caring Hess well enough to know  those postgame goalie meetups aren’t filled with taunting or trash talk. On the contrary, Hess, who two years ago was playing at the Junior Gold B level — about as far away from varsity hockey as Minnesota is from Mars — keeps everything upbeat and positive.

“He’s such a nice guy, the ultimate team guy,” Hermanson said. “Super humble. But when he is on the ice he’s an absolute beast.”

“He’s such a class kid,” Holy Angels coach Pat Griswold said about Hess. “You know, in a game where maybe it’s a 5-, 6-, 7-goal win, he’s just offering words of encouragement.

When you are beating a team by a lot, or you score an overtime goal, you think that could be you.

Hess, who grew up playing in the Edina youth system and last year was the Hornets’ top junior varsity goaltender, transferred to Holy Angels last fall. By all accounts he’s been a welcome addition to the hallways, locker room and the ice, where he’s played every minute of every Stars game.

“You just want to make sure he fits in the culture, you know, on our team, but more importantly the community at the school,” Griswold said. “I’ve talked to some teachers and counselors about him, and they said you can't find a nicer kid.”

Not that those numbers matter. At least not to Hess.

“I just want to keep playing good,” he said. “Wins are more important than my own stats.”

Hess stopped 21 of 22 shots in a 2-1 win over Blake on Jan. 29. He’s allowed more than three goals just five times this season and has two shutouts.

While Mahtomedi’s Ben Dardis and Cretin-Derham Hall’s Marko Belak are widely considered the two main frontrunners for the Frank Brimsek Award that goes to the state’s top senior goaltender, Hess is among a group of seniors (goalies such as Red Wing’s Dixon Ehlers, Andover’s Austin Brauns and Centennial’s Jack Fuller) who have blossomed this season without much, if any, previous varsity notoriety.

“It doesn’t matter if its a 3-3 game or a 7- or 8-nothing game, he’s still on that same level mentally,” Griswold said. “And competes every day in practice, he doesn’t want to give up any goals. I love that about him. Every day in practice he really wants to make that save.”

So, exactly what does Hess say to his counterparts after games?

“When you are beating a team by a lot, or you score an overtime goal, you think that could be you,” Hess said. “You know how it feels when you lose or you are doing bad.

“I just tell them to keep your head up, keep going.” 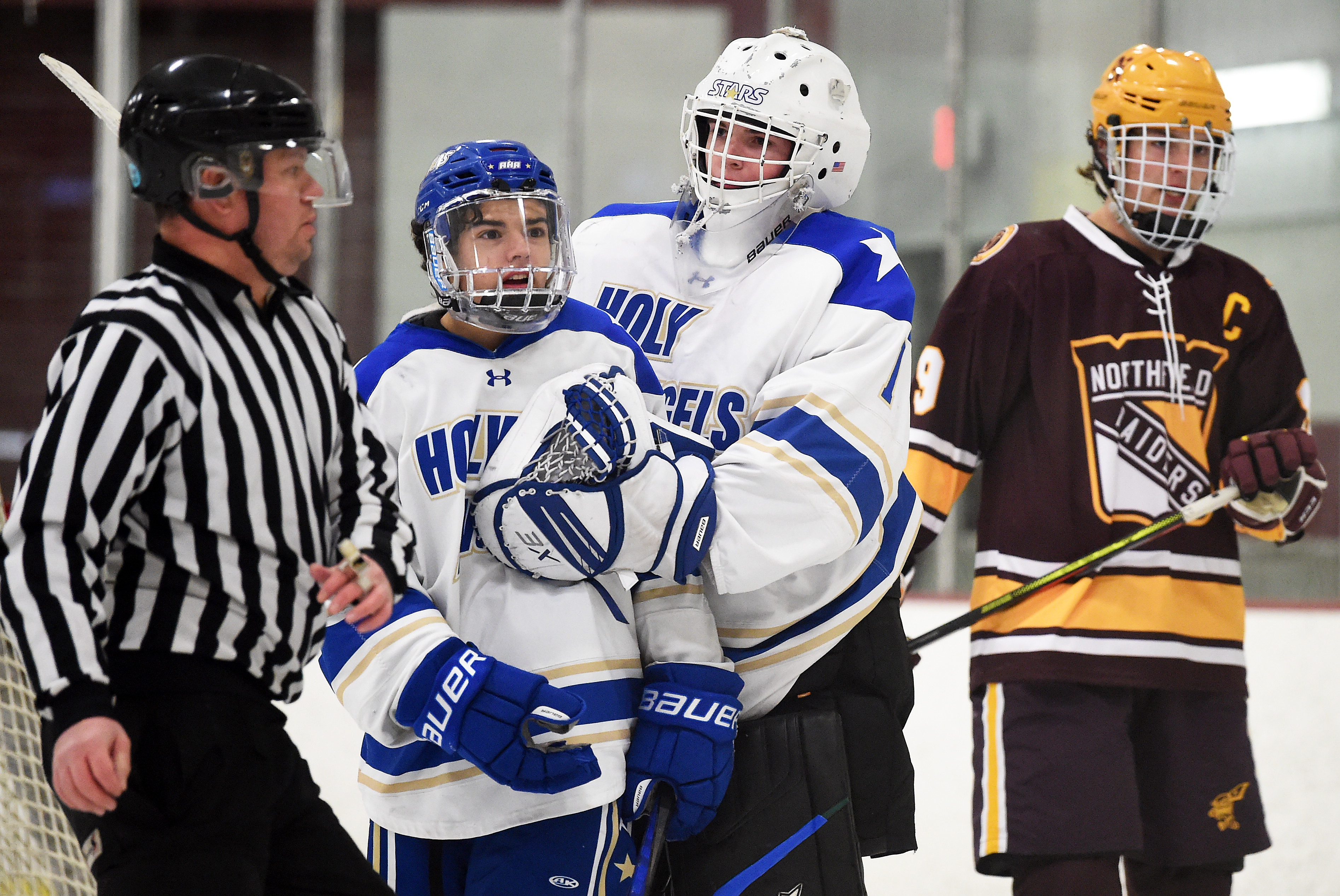 Holy Angels goaltender Bryce Hess has been a calming influence on his teammates this season. Photo by Loren Nelson, LegacyHockeyPhotography.com