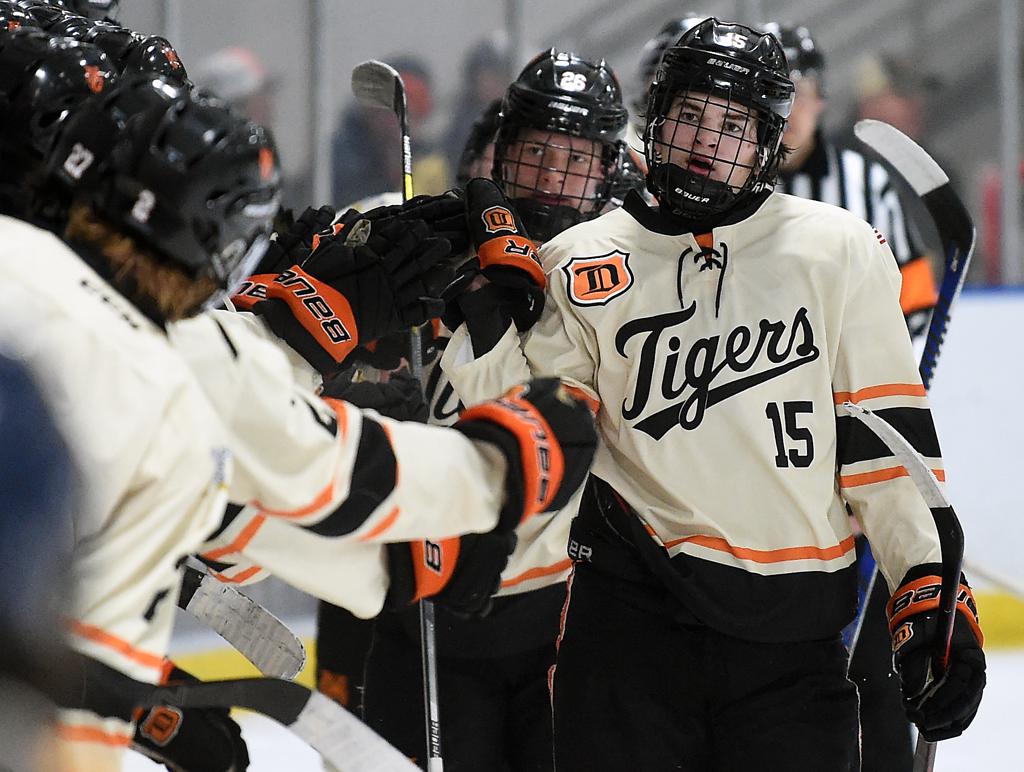 Delano's Anders Peterson has 13 goals this season, including the two he scored in the Tigers' 3-2 victory over Mahtomedi on Tuesday at the Delano Area Sports Arena. Photo by Loren Nelson, LegacyHockeyPhotography.com

Hermantown, Warroad and Mahtomedi formed something of a Holy Trinity in this season’s Class 1A rankings.

Week after week, those three teams locked down the top of the small schools tighter than the lid on a pressure cooker.

Hermantown, Warroad, Mahtomedi. Shoot, assembling the top of the rankings was as easy as 1, 2, 3.

All that changed last week as fast as a spinning Bruce Halonen could fire a pass to a streaking Anders Peterson for a shorthanded goal. Bang, bang.

The high-speed play on Tuesday was part of a three-goal second period eruption for Delano in its 3-2 triumph over Mahtomedi, an outcome that finally cracked the Class 1A top trio’s code.

“I think this is our best win of the season,” Peterson said about the victory that helped launch Delano into the No. 3 spot into this week’s Legacy Hockey’s Power Rankings and bumped Mahtomedi to No. 4. “It just gives us more confidence, a huge booster for us.

“We just need to keep it going all the way through playoffs.”

The Tigers rolled to a 3-1 win Thursday over Monticello but ended the week with a 4-1 loss on Saturday to No. 2-1A Warroad (the Warriors scored an empty net goal to clinch it).

Still, Delano finished the regular season with an 18-7-0 record playing a schedule that included five games against Class 2A teams, a matchup with No. 1-1A Hermantown and games against No. 5-1A Minneapolis, No. 13-1A Thief River Falls, No. 14-1A Orono, No. 16-1A Litchfield/Dassel-Cokato and No. 19-1A East Grand Forks.

Mahtomedi’s schedule was even more daunting, as it included two games each against Hill-Murray and St. Thomas Academy along with matchups against Cretin-Derham Hall, Roseau, Benilde-St. Margaret’s and Eden Prairie, all Class 2A state powerhouses.

“I mean, there's no team in the state in Class A that plays a tougher schedule than those guys, maybe Hermantown,” Delano coach Gerrit van Bergen said about Mahtomedi. “And that's part of what we're trying to do. We're trying to get to that point.

“I'm bugging all the big schools to play us.”

For now, the Tigers will take all the inspiration they can get from Tuesday’s victory over Mahtomedi.

“We know we can beat any (Class 1A) team in Minnesota now,” Tigers goaltender Drew Dorsey said after the win over the Zephyrs.