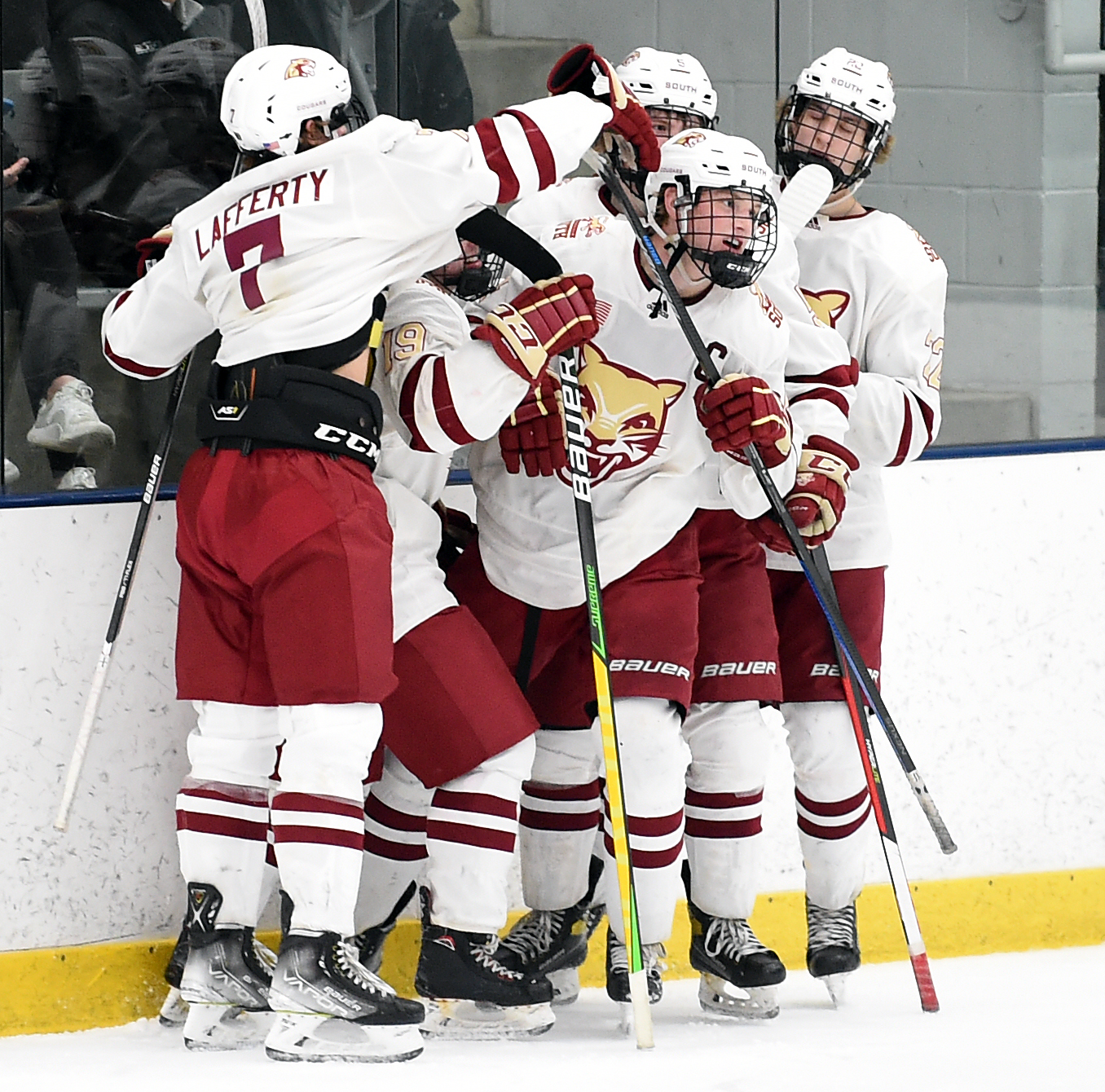 Lakeville South's Tanner Ludtke celebrates after scoring a second-period goal Friday in a 3-1 win over Prior Lake. Photo by Loren Nelson, LegacyHockeyPhotography.com

Is it too early to begin weighing the merits of Mr. Hockey candidates for next season?

That’s a rhetorical question. Of course it’s too early, considering this season’s crop of finalists hasn’t been announced, much less a winner named.

Still, the best player in the state debate, regardless of year in school, was raised Friday night after Lakeville South junior Tanner Ludtke scored twice and played tenacious defense in the Cougars’ 3-1 victory over Prior Lake at the Dakotah! Ice Center.

“The way he prepares for a game is second to none,” Lakeville South junior Aidan Willis said about his linemate. “He’s the hardest-working kid I’ve ever seen. I think we have the best player in the state in No. 4.”

You’ve got to admire Willis’ loyalty, but there’s a lot of truth in his words, too. It’s hard to even nitpick Ludtke when assessing assessing his end-to-end game.

“He's shifty, he creates space for himself, he has a good release, he can shoot the puck,” Prior Lake coach Joe Pankratz said about Ludtke, Lakeville South’s top scorer with 46 points. “He plays a lot, I mean he’s out there all the time. He's just a good overall player.”

Ludtke, who has committed to play at Nebraska Omaha, Willis and Ashton Dahms faced one of their toughest challenges of the season Friday as they were matched up against Prior Lake’s top unit of Alex Bump, Will Schumacher and Sam Rice (combined 141 points). Bump, a Vermont commit, in particular had been all but unstoppable in the second half of the season, scoring 48 of his team-high 65 points in the Lakers’ last 14 games.

“I love Bump, he’s such a good player,” Ludtke said. “I have ton of respect for him.

“When you're going against these guys and there’s so much skill head to head you’ve got to dial it in and play a complete game, and I think that's how we're gonna have to win in the playoffs, too. Offense for sure, but you’ve got to win your own end first.”

Read more about Lakeville South's 3-1 win over Prior Lake

Bump scored a second-period goal to tie the score at 1-1 and energize a massive Prior Lake student section estimated at 250, only to have Ludtke respond less than 4 minutes later with a wicked shot that rang into the net off the right goalpost.

“Big players make big plays, especially at times when momentum could tilt the game in their favor,” Willis said. “Big players, they somehow find a way. They change the game.”

Ludtke’s two goals give him a team-best 21 this season to go with 25 assists, also a team high. His two goals Friday extended his goal-scoring streak to seven games. No. 9-2A Lakeville South, the South Suburban Conference champion, has won 13-straight games and enter the playoffs with a 22-3-0 record.

“I think we're buzzing at the right time,” Ludtke said. “I think I there’s times in the year where you can win against bad teams and create some bad habits. But we're winning right now against good teams, so we’ve got good habits.”

No. 15-2A Prior Lake enters the playoffs with a 15-10-0 mark and one of the favorites to advance to the state tournament out of Section 2AA. Bump figures to, at the very least, be one this year’s Mr. Hockey finalists.

As for all that best-player talk, Willis gets the final word.

“I think it’s not even close,” he said, giving the nod to, of course, Ludtke. “I wouldn’t even say it’s a debate.” 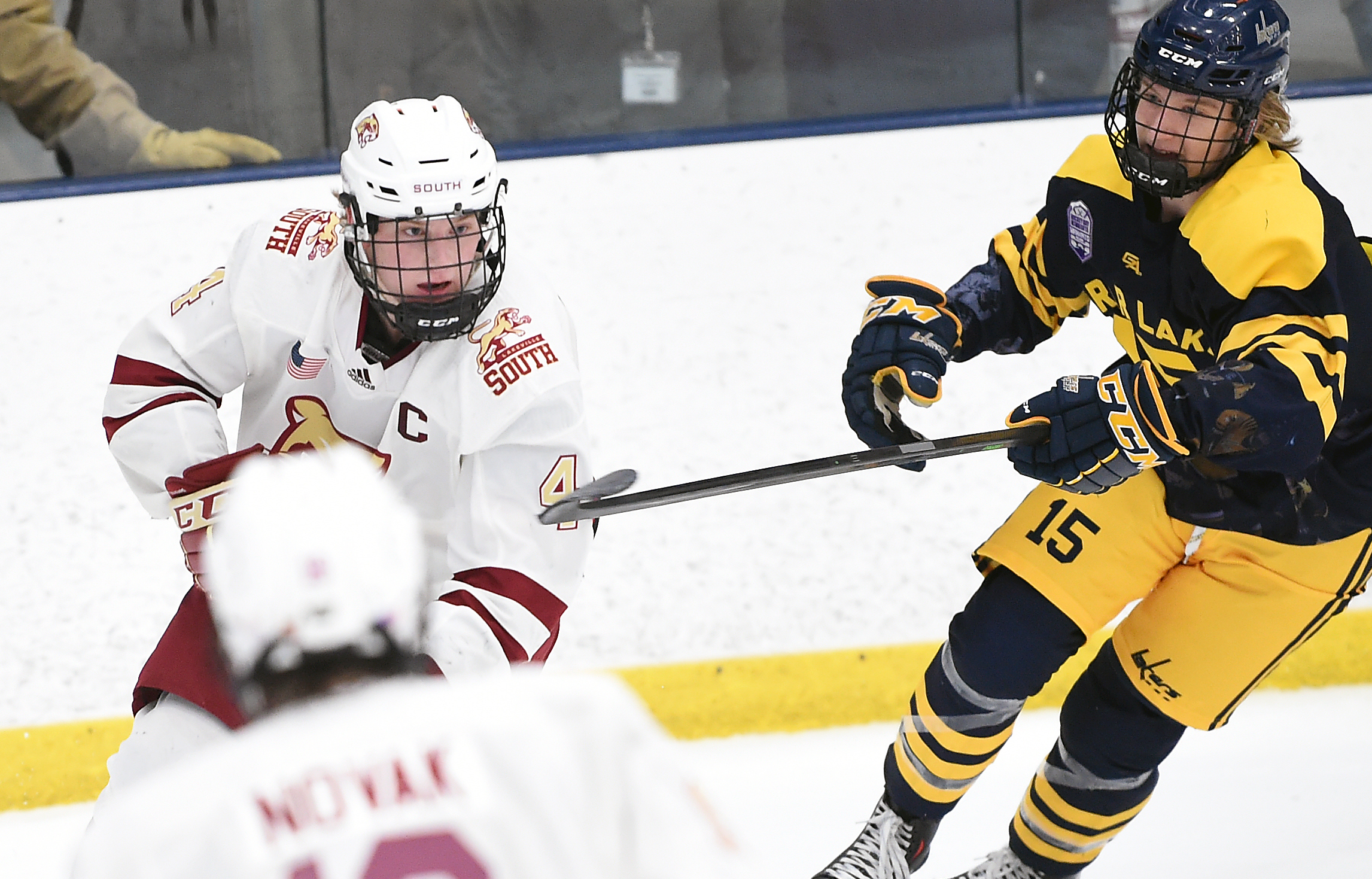 Lakeville South's Tanner Ludtke, left, scored what proved to be the winning goal in the second period and added an empty netter in the third in Friday's 3-1 win over Prior Lake. Photo by Loren Nelson, LegacyHockeyPhotography.com