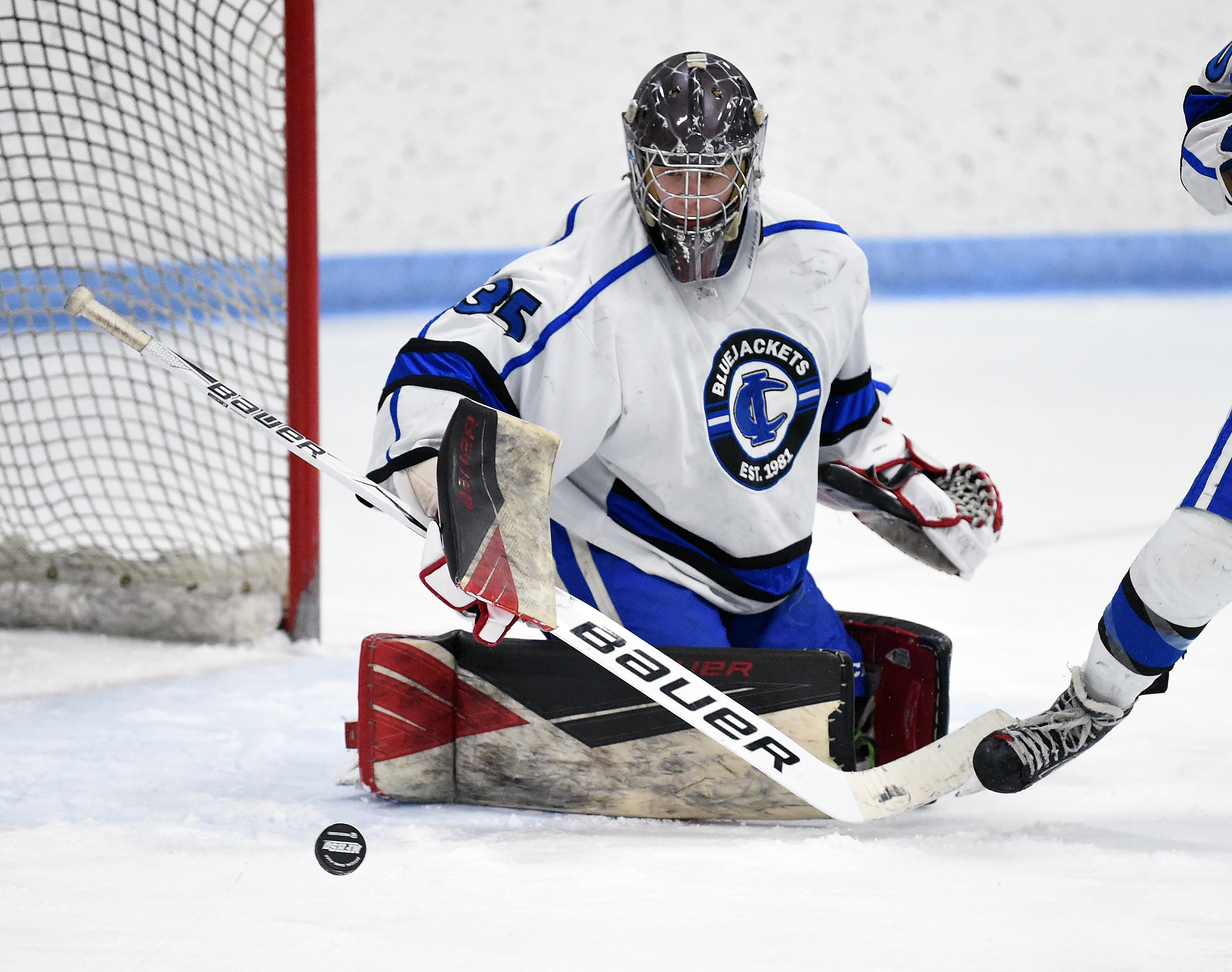 Cambridge-Isanti freshman goaltender Jaxon Sibell is unbeaten in eight career varsity starts and leads the state with a .950 save percentage. Photo by Loren Nelson, LegacyHockeyPhotography.com

Jaxon Sibell, the freshman Cambridge-Isanti goalie who wears hand-me-down pads from his famous older brother and still has Bantam-level eligibility, is in the midst of scripting one of this season’s great success stories. Even if it is something of a sequel.

Sibell leads the state with a .950 save percentage and hasn’t allowed more than two goals in any of his starts. The Bluejackets’ nine-game winning streak has coincided with the Sibell’s insertion into the starting lineup.

Naturally, the sparkling statistics and unbeaten start to his career (Sibell is 8-0-0) have stirred up interest from curious onlookers from around the state.

“I'm hoping that he's just kind of a little naive to that,” Cambridge-Isanti coach Jarad Ziebarth said about the hype surrounding his young goaltender. “We just keep telling him to be grounded. We tell him every day, ‘Just remember, we want you to keep improving, just like our team.’

If all of this has a bit of a familiar ring to it, that’s because a phenom goaltender by the name of Jacob Sibell drew statewide attention back during the 2012-13 season when he won his first five varsity starts a seventh-grader for a Cambridge-Isanti program not known for making headlines. The Bluejackets have reached a section semifinal just twice in their 40-year history and before last season hadn’t posted a winning record since 2006-07.

Young Jacob Sibell is now a much-accomplished Jake Sibell, a 22-year-old freshman at Niagara University. Sibell spent four seasons toiling at the junior level, the last of which was last season when he earned superstar status by posting an incredible 51-4-2 record (counting playoffs) for the Aberdeen Wings of the North American Hockey League, setting league single-season records for goals-against average (1.19) and save percentage (.952). He was named USA Hockey’s junior goalie of the year.

“He’s taught me pretty much everything I know,” Jaxon Sibell said about his brother, who for the past several years has returned home to lead summer goaltending camps. “He basically taught me how to be a goaltender.”

Jaxon was his usual unflappable self on Thursday in one of Cambridge-Isanti’s biggest and most intense games of the season. He stopped 25 shots as the No. 12-1A Bluejackets beat No. 15-1A Chisago Lakes 3-2 in overtime at Isanti Ice Arena.

Sibell, who could have played a second season at the Bantam A level, said his brother encouraged him to give varsity hockey a try. Jaxon said he likes playing at the higher level and facing the harder shots that come with the bump up in age, speed and strength. Sibell knows when he’s matched up against dangerous shooters such as Chisago Lakes’ Ryan Schmidt, who has been among the state’s scoring leaders all season, and relishes the challenge.

Schmidt scored the lone goal of the third period Thursday to force the overtime.

“I should have had (that one),” Sibell said, as if lamenting the trophy bass that got away. “He sniped me, top glove.”

Not to worry. Sibell was unbeatable despite being under heavy pressure in the waning minutes of the third period and during stretches of the overtime.

“His ability to track the puck, to me, is amazing,” Bluejackets senior defenseman Andrew Alljets said. “I haven't seen anyone do it like him. And not only that, just to clear everything ... there has not been one rebound that that they could capitalize on, which is all thanks to him.”

Great goaltending has been just part of Cambridge-Isanti’s 9-2-0 run to the midpoint portion of the season. The speedy, always-hustling Bluejackets, 11-7-1 last season, have a potent mix of veterans and youngsters, each of whom have found ways to contribute.

“I think their skill level surprised me quite a bit,” Chisago Lakes coach Cory Lushanko said. “I wasn’t sure what we were going to see in terms of their puck movement and playmaking ability. They play a very straightforward 200-foot game. Our guys weren’t really expecting the tenacity Cambridge brought.

“And their goalie is the real deal.”

Senior Jaxon Jones and sophomore Will O’Donovan share the team scoring lead with 12 points. The diminutive O’Donovan scored twice against Chisago Lakes, including the overtime goal. He has four game-winners among his seven goals.

“Our game is just everyone busting our humps, moving our feet, quick passes, aggressive play,” Alljets said. “And our goaltending is a very big help.

"I mean, obviously, he learns it from his brother. But it's his own will to want to do it and make himself better that has made him as good as he is.” 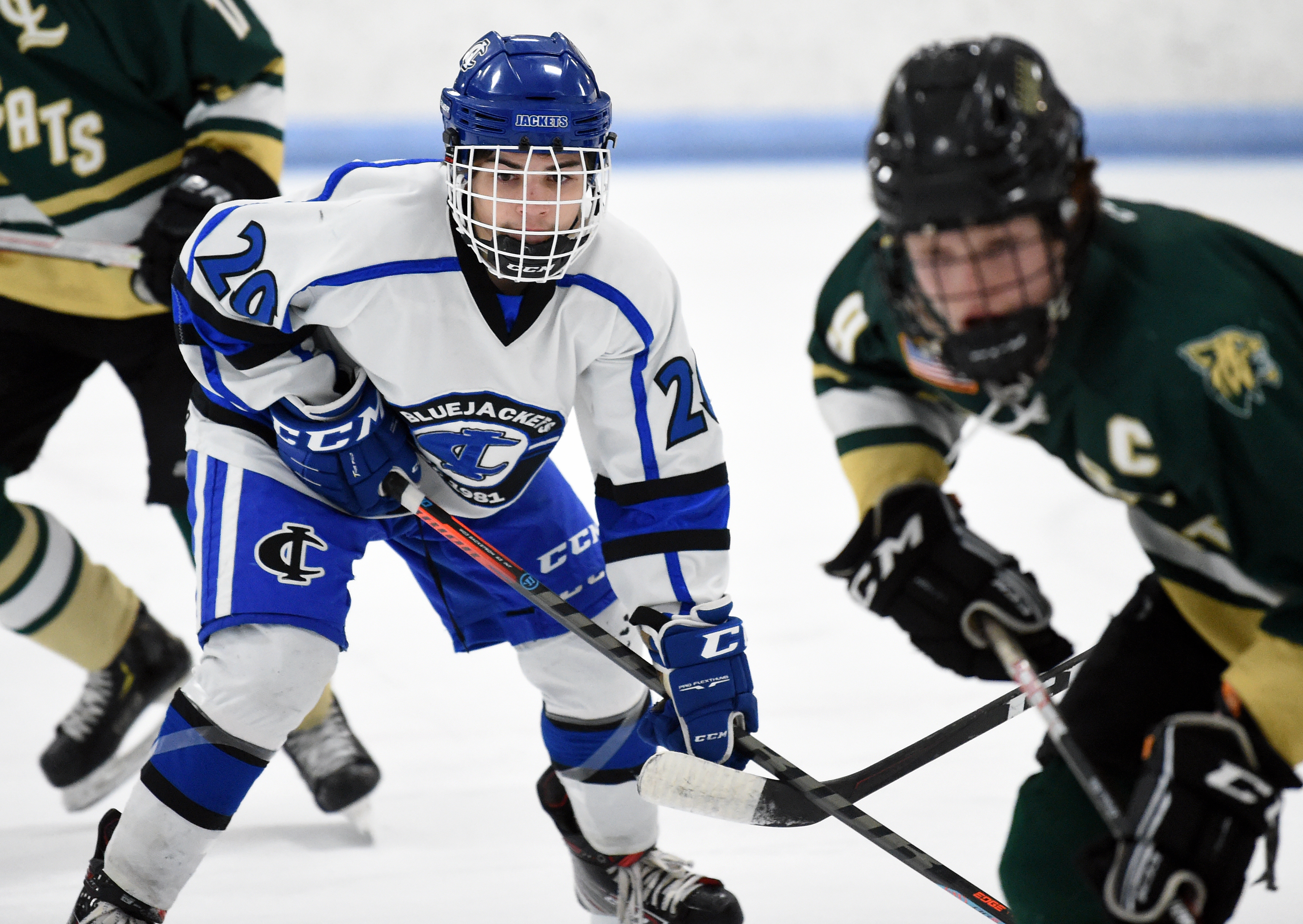