One of The Guys 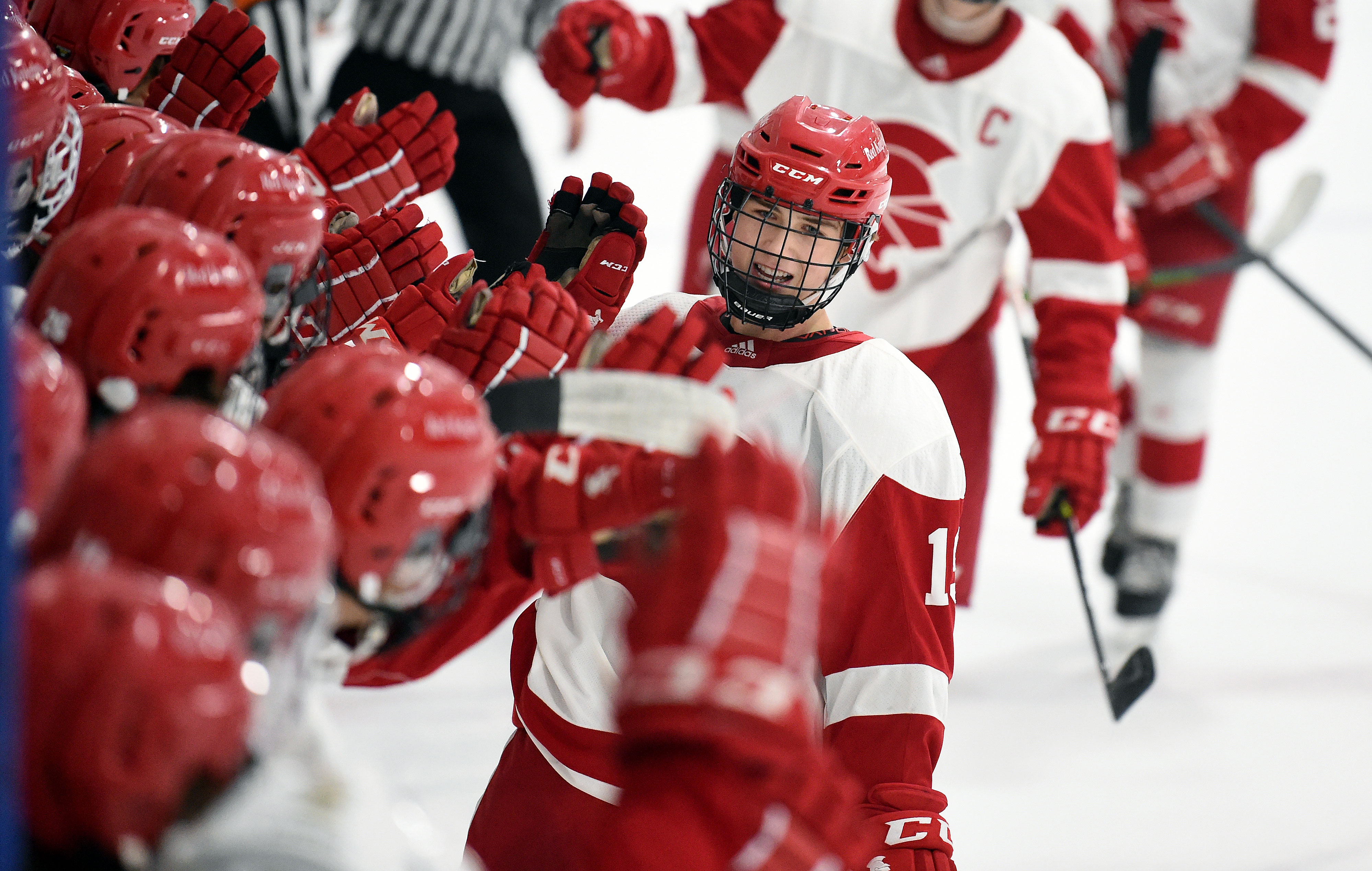 Sophomore Brendan McMorrow gets a warm reception from the Benilde-St. Margaret's bench after McMorrow scored his first varsity goal in a 2-1 win over Stillwater on Dec. 30. Photo by Loren Nelson, LegacyHockeyPhotography.com

Benilde-St. Margaret’s has plenty of players eager and capable of being The Guy.

Players who don’t embrace big moments as much as they lay down a stack of bills and own them. Players who are so busy scheming ways to win they don’t have time to worry about losing. Players who don’t handle pressure as if it were a flaming cactus but, instead, embrace it as a trusted companion.

Red Knights senior defenseman Tristan Sarsland is one of those guys. He scored with less than a second remaining in regulation as Benilde-St. Margaret’s beat Maple Grove 3-2 Dec. 29. He also scored with 32 seconds left in a 3-2 triumph over Eden Prairie Dec. 4.

Senior forward Adam Marshall is another guy happy to be The Guy. He scored with 1:46 remaining in overtime as Benilde-St. Margaret’s beat Rogers Dec. 28.

That’s a lot of The Guys. Sometimes, though, all those guys need a little help. Especially when playing three top-caliber in teams in three days. The best teams have pressure-craving players stacked two and three lines deep.

“You don't win three games in three days against quality competition without a total team effort,” Benilde-St. Margaret’s coach Ken Pauly said after the Red Knights’ 2-1 victory over Stillwater Dec. 30 completed a 3-0-0 run through the three-day Tradition in the Park tournament. “You can't look to just just look to (Stewart) or just look to Sarsland or just look to Marshall.

“Someone else has to step up and do something and be the guy, you know.”

Analyze all of the winners of the state tournament, the ultimate in three-day gut checks, and it’s hard to find a championship team didn’t receive a clutch contribution or two from players not at the top of the depth chart.

Against Stillwater, Benilde-St. Margaret’s senior defenseman Ben Thompson scored his first goal of the season and sophomore forward Brendan McMorrow the first goal of his varsity career. Those were much-needed contributions from a team running on fumes and playing a hit-anything-that-moves opponent in the Ponies.

“The most physical game we’ve had all year, I think,” McMorrow said about the game against Stillwater. “Right in my wheelhouse I think, yeah.”

McMorrow, always eager to bang bodies in the corner or create a personal workspace in front of the net, assisted on Thompson’s second-period goal, a blast from the right point, then scored the winner with 7:15 left in the third when he shoved a loose puck into an open net.

“That was a huge goal for him and the team, too,” said Thompson, a mostly stay-at-home defender who was selected to play in the Upper Midwest High School Elite League this fall. “So just a big one all around.”

McMorrow, one of several skilled Red Knights sophomore forwards, had eight assists entering the Stillwater game and leads the team in plus/minus with plus-eight. A USA Hockey Select 15 national developmental camp selection last summer, McMorrow figures to score dozens of goals by the end of his career — even if it did take a while to get the first.

“They just hadn't come yet,” he said about his goal drought. “I kind of got the monkey off my back there a little bit.”

McMorrow’s goal had the Red Knights whooping and hollering on the bench, all of them thrilled to bang gloves as he skated past wearing a huge grin.

“A lot of the sophomores we have, they're pretty dang good, but they're also really great kids,” Pauly said. “It's easy to cheer for them.”

Benilde-St. Margaret’s improved to 7-4-0 and vaulted to No. 7 in Class 2A thanks to its unbeaten holiday tourney run. The Red Knights face No. 5-2A Edina (8-3-0) in a Saturday matchup that very likely will require a clutch play in the waning seconds. Seven of the Red Knights’ games this season have been decided by a single goal — three of them in overtime.

“It'd be awfully nice for the sake of my aorta, that we could have a game at some point with, you know, a two- or three-goal cushion or something like that,” Pauly said. 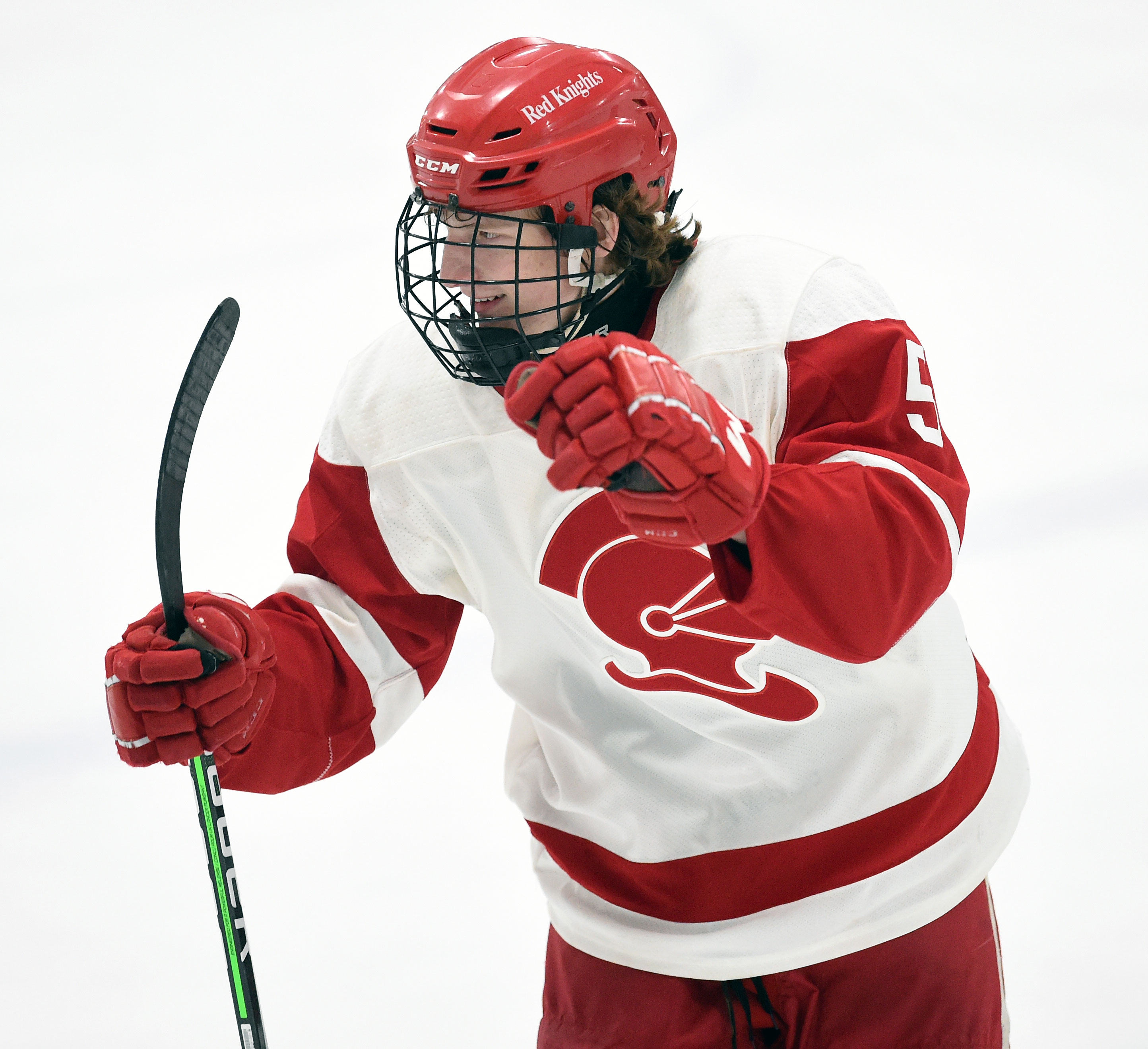 Senior defenseman Ben Thompson celebrates after scoring his first goal of the season on Dec. 30 against Stillwater at the St. Louis Park Rec Center. Photo by Loren Nelson, LegacyHockeyPhotography.com