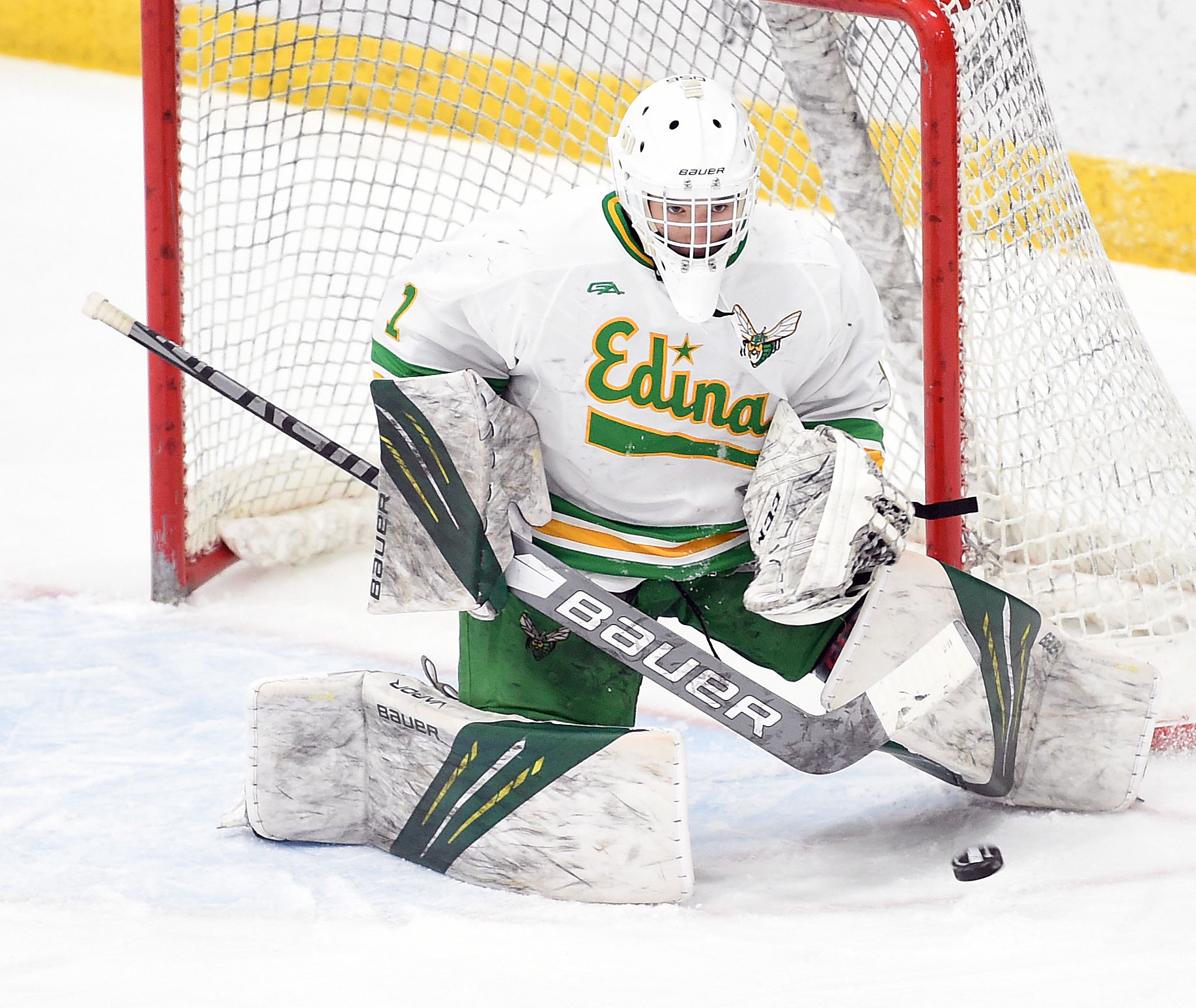 Edina junior goaltender Robbie Clarkowski makes of one of his 38 saves in Saturday night's 2-1 victory over Lakeville South. Photos by Loren Nelson, LegacyHockeyPhotography.com

Edina’s youth hockey system is one of the biggest and most successful in the state. It produces enough top-level players that the Hornets could assemble two, maybe even three, high-caliber high school teams each season.

High-caliber, yes. Highly successful? Well, talent can only take a team, even a team loaded with all-stars, so far.

And in the last couple weeks a mostly listless Edina was headed nowhere.

The Hornets started the season with six-straight wins, looking dominant in the process. Then they lost three of their next four. Giles let his players know, in no uncertain terms, his thoughts about their work ethic.

“We kind of got yelled at yesterday for not doing the things that we were doing earlier in the season and kind of playing our own game,” said junior Jimmy Clark, who had two assists in the Edina’s 2-1 win over Lakeville South Saturday at Braemar Arena. “So we just got back to doing the little things, and it worked out for us.”

Little things such as getting pucks deep in the offensive zone and committing fewer turnovers. Little things like back-checking with purpose and crashing to the net with abandon.

All those things didn’t materialize until the third period of the New Year's Day special — the only game played in the state — against the No. 3-2A Cougars (9-2-0).

The No. 2-2A Hornets (8-3-0) trailed 1-0 and had been outshot 28-16 heading into the third. If not for the stellar play of junior Robbie Clarkowski, who stopped an assortment of breakaways and close-range chances among his 38 saves, Edina would have been all but out of the game.

“The expectation for Robbie is to hold us in there as long as he possibly can until you can get the wheels going,” Giles said about Clarkowski, who went 9-6-1 a year ago and is 7-3-0 with a 2.18 goals-against average this season. “And fortunately for us he kept us in there.”

The 6-foot-6 Clarkowski used every inch of his frame to get his left leg pad on an Aidan Willis shot in the crease in the first period. Minutes later he stood tall while stopping Tate Pritchard on a mini-breakaway.

Clarkowski is as good of an example of Edina’s surplus of talent. Bryce Hess, a senior having a standout season at Holy Angels, and Josh Middleton, a sophomore at St. Louis Park who is one of the best goalies in the state in his age group, also came up through the Edina youth system.

Clark said he remembers Clarkowski as the “tall goalie” when the two played together growing up. And that was before Clarkowski underwent a growth spurt a couple of years ago that saw him sprout 8 inches, from 5-10 to his current height.

“He came to us last year as kind of a tall, gangly kid,” Giles said. “And now he's growing into his legs a little bit and into his body a little bit, and I think he's getting better all the time.”

Giles said Clarkowski’s Saturday performance was the best of the season for his goaltender. Which isn’t surprising. After all, it’s not often Edina surrenders 39 shots in a single game (the team’s previous high this season was 34 in a 6-2 Dec. 29 win against Prior Lake.

“Their goalie played really well,” Lakeville South coach Josh Storm said. “He controlled rebounds really well. But there's just some stuff that I feel we need to kind of improve on, too.”

“I mean, 18 shots and no goals in the first period,” Storm said. “A lot of belly shots and just not enough intensity at the net, I feel like.” 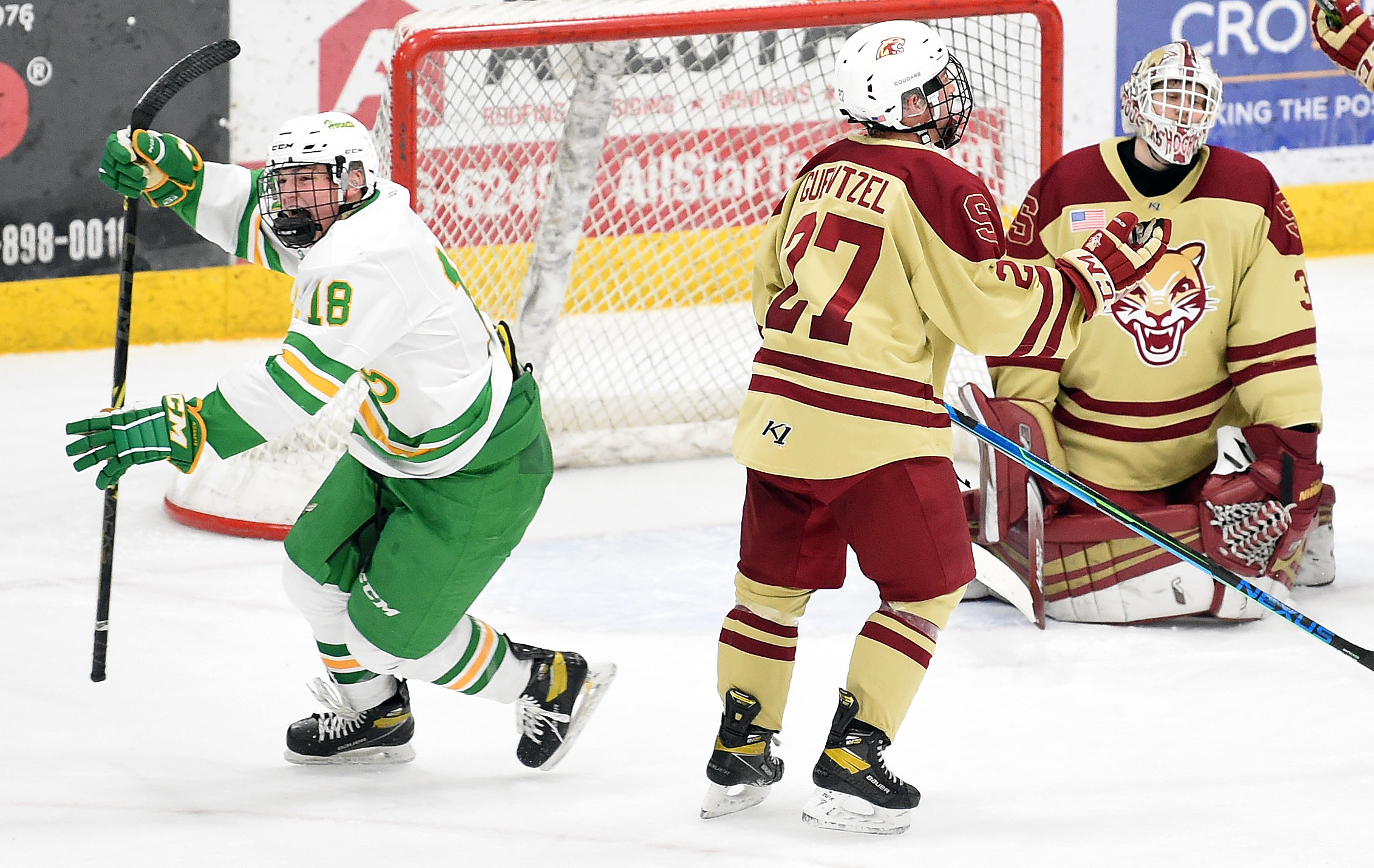