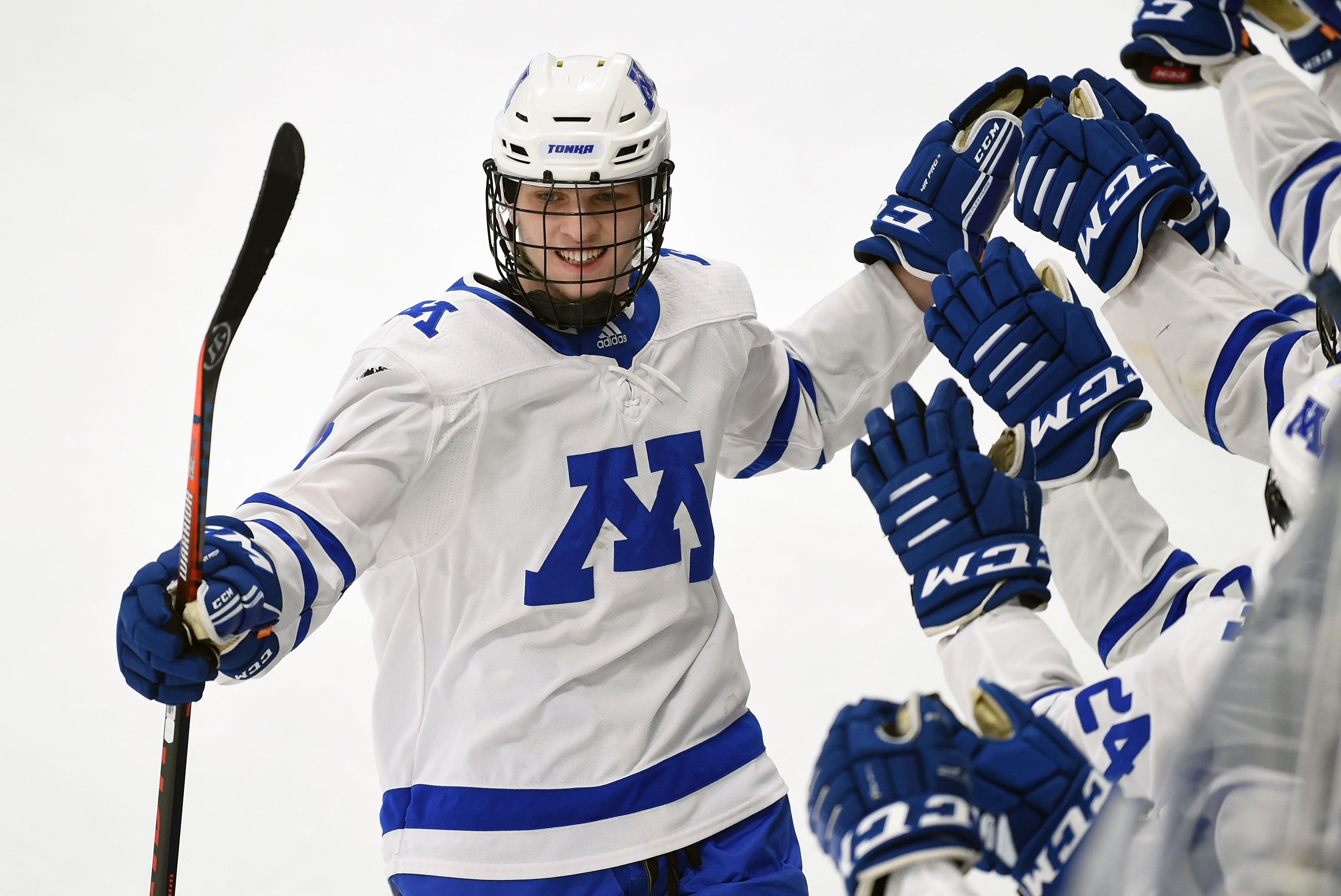 Sometimes it’s nice to have guys who can stickhandle their way out of a Mini Cooper. Guys who work the puck yo-yo like, as if it is attached to their stick with a string. Guys with dragstrip speed and road course maneuverability.

Those guys can help teams win games. Lots of ’em.

But not all of them.

Sometimes plain old brute force is required. The bigger the bodies the better. Muscle and hustle is a winning combination, too.

Minnetonka’s Tim Lagerback stands 6-foot-1 and weighs 181 pounds. Reagan Shepherd is 6-3, 185. Both have plenty of skill to go along with all that size. But if the situation calls for physicality over toe-drags and assorted other dangles, Lagerback and Shepherd are more than willing to apply their weight as needed.

“It was a good, hard game,” Lagerback said after scoring the winning goal early in third period Thursday night as No. 14-2A Minnetonka beat No. 13-2A Chaska 3-2 at Minnetonka’s Pagel Activity Center.

Shepherd, who played for Eden Prairie as a sophomore and the Dallas Stars Triple-A 18-under team last winter, scored his first goal as a Skipper and added two assists.

Shepherd was well into his coming-out party when late in the second period teammate Jack Rausch took a skate blade to his upper thigh, a ghastly injury that stopped play as the bleeding was stopped. Rausch eventually was helped off the ice and sent to the emergency room for repair — a 30-stitch cut at least, estimated Minnetonka coach Sean Goldsworthy.

As Skippers used the intermission break to re-gather themselves after Rausch’s departure, Shepherd steeled himself for a strong finish.

“I just wanted to win the game for him, because that was all we could really do,” he said.

Shepherd assisted on Lagerback’s goal 11 seconds into the third period.

“He brings a lot of energy, makes good plays, plays hard,” Lagerback said about Shepherd, who scored six points with Eden Prairie as a sophomore and nine in 23 games last season in Dallas.

“He's an awesome kid,” Goldsworthy said about Shepherd. “He's fitting into our culture really well, he’s made a whole bunch of new friends. But I think we're just trying to figure out his assets on the ice and how to use them the best.”

Shepherd has played wing. He’s played center. On Tuesday he played alongside Lagerback and Reed Hanus on a highly-effective all-senior line. The trio applied heavy forechecking pressure all night, generating offense off their ability to win puck battles and jostle for position in the slot.

Minnetonka (5-2-0) isn’t typically thought of as a team that will pound its opponents into submission. But the Skippers seemed perfectly suited to play a rugged style against Chaska.

“I think the beauty of our team is we can play kind of both ways,” Goldsworthy said. “You know, when we do play Lake Conference teams like Edina and Wayzata, we can play heavy and we can play 200 feet and that's why you see overtimes every night we play those guys.

“But if you want to play a skill game, I think we can get up and down the ice, too.”

The victory was Minnetonka’s first over a top 20-ranked team all season. Chaska has one such victory, a season-opening triumph over St. Thomas Academy. Thursday's loss snapped the Hawks' six-game win streak to start the season.

“We had an unbelievable game against STA, that night we played our best hockey,” Chaska coach Matt Cooke said. “And we’ve been able to win since then without playing our best hockey. You’re not going to do that playing against competition like Minnetonka.

Fitting for the night’s big-bodied theme, 6-4, 181-pound defenseman Sam Rinzel turned in a stellar performance for Chaska. The junior, who has committed to play at Minnesota, consistently won his corner and net-front battles and deftly moved the puck out of the Hawks’ zone. He provided a large share of Chaska’s offense, too, with his rushes up the ice. Rinzel’s second-period power-play goal put the Hawks up 2-1 late in the second period.

“His his compete level went way up tonight,” Cooke said. “Seeing him push himself like that was a bright spot.”

“The score could have very easily been 8-2,” Cooke said. “Wishy stood on his head.” 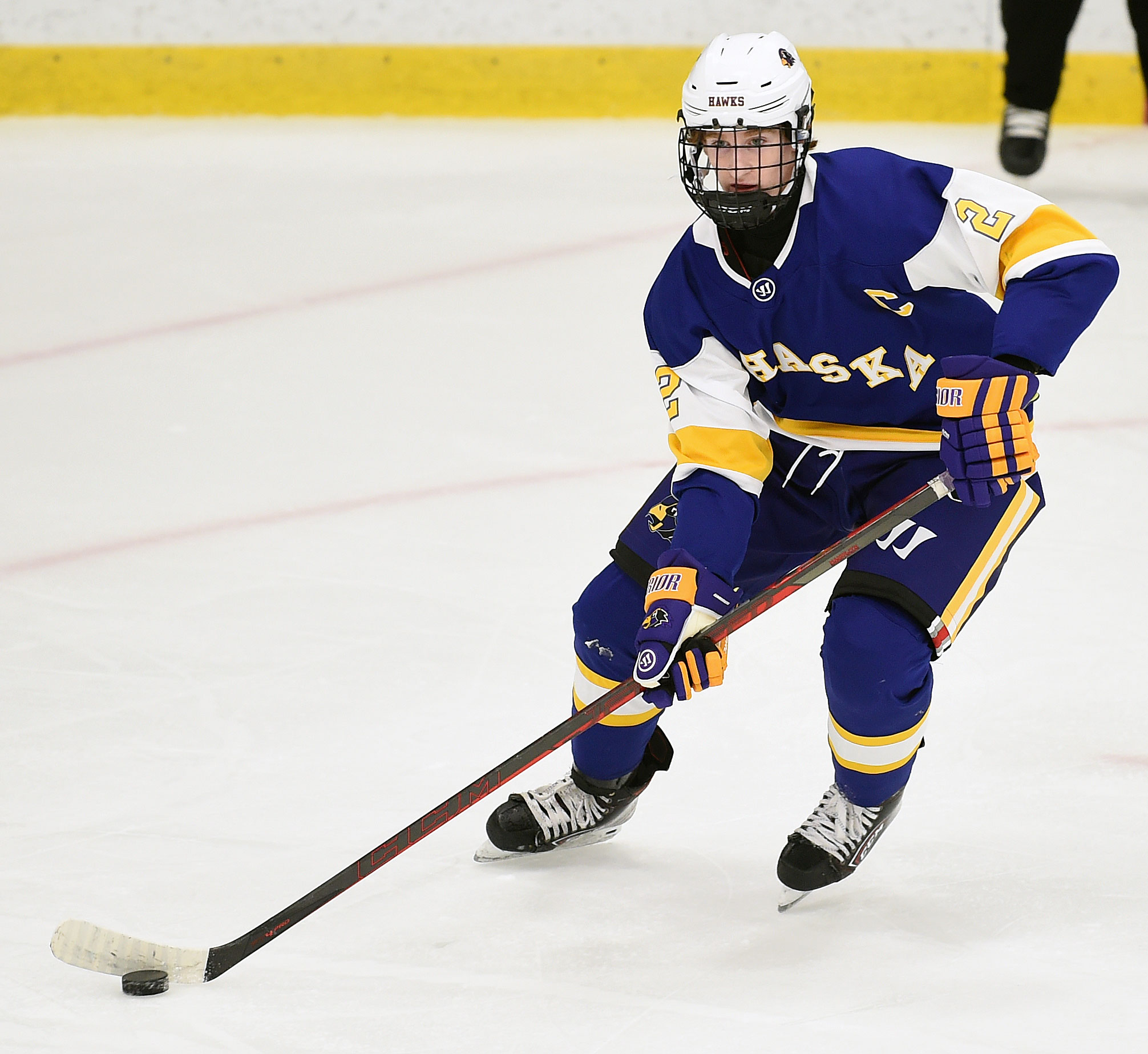 Chaska junior defenseman Sam Rinzel scored a second-period power-play goal for the Hawks on Thursday night in a 3-2 loss to Minnetonka. Photo by Loren Nelson, LegacyHockeyPhotography.com