After just missing on state tourney berth, No. 13 Armstrong/Cooper riding wave of enthusiasm 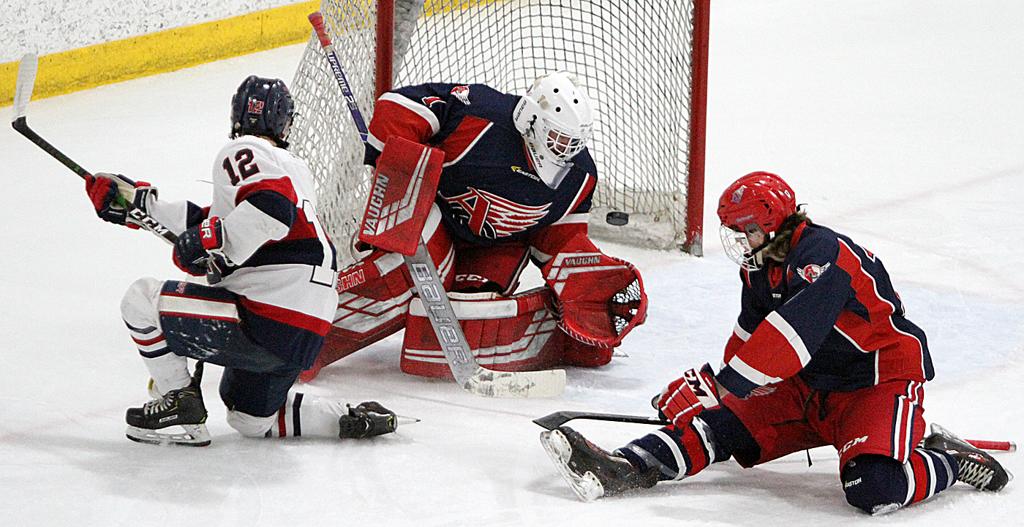 Returning Robbinsdale Armstrong/Cooper goaltender Owen Reeve stopped all 18 shots he faced, including this one by Orono's Jamie Bazil, in a Section 2A semifinal last season. Photo by Drew Herron 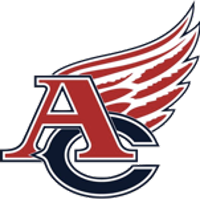 So close and yet … so close.

Robbinsdale Armstrong/Cooper came within a thin, white strand of hockey tape of reaching the state Class 1A tournament last season, losing to Delano 3-2 in double overtime in a scintillating Section 2A championship game at a packed St. Louis Park Rec Center.

The Wings, in their sixth season since the Armstrong and Cooper programs (bitter rivals for decades) combined and first since moving down from Class 2A to 1A, outshot the Tigers 37-16 and had glorious chances to win the game in both overtimes.

Chances such as the Noah Weisjahn redirect of a Ben Anderson saucer pass with 19 seconds left in the first overtime. Chances such as top-scorer Jack Campion’s low shot off a rebound in double overtime that didn’t enter the net only because of straight up thievery by Delano goaltender Cade Lommel, making the stop with his outstretched right foot’s big toe.

The section final appearance was the first for any Robbinsdale program since Armstrong reached the 4AA final in 2001, and sent a jolt of enthusiasm through the program that should have a carryover effect this season. It takes more than a Zamboni-load of exuberance to win games, however, and the Wings graduated 11 players, including four of their top six scorers (three of them with the last name Campion).

On the plus side, Weisjahn and goaltender Owen Reeve, two of the heroes of Armstrong/Cooper’s extended playoff run, are among nine seniors who saw significant action. Weisjahn scored four of his 14 goals in the playoffs last season. Reeve stepped up his game in the postseason, too, the highlight being an 18-save, 4-0 section semifinal shutout against high-scoring and top-seeded Orono.

While there is just one Campion remaining (Teddy, a senior, scored three goals and added 10 assists last season), both Potters are back. Jack, a senior forward, scored 11 goals and Joe, a senior defenseman selected to play in the Upper Midwest High School Elite League this fall, had three goals and 11 assists. Both Potters stand 6-feet, 1-inch -- twin pillars on team loaded with 6-footers.

Expect at least a handful of reinforcements to arrive from Armstrong/Cooper’s Bantam A team that was No. 8 in one set of season-ending state rankings. Another benefit, at least in terms of preparing for the playoffs, is the Wings’ Northwest Suburban Conference gauntlet of a schedule that typically includes big-school powers such as Maple Grove, Andover, Blaine and Centennial.