Beat goes on for No. 1 Eden Prairie, a fixture in recent title games 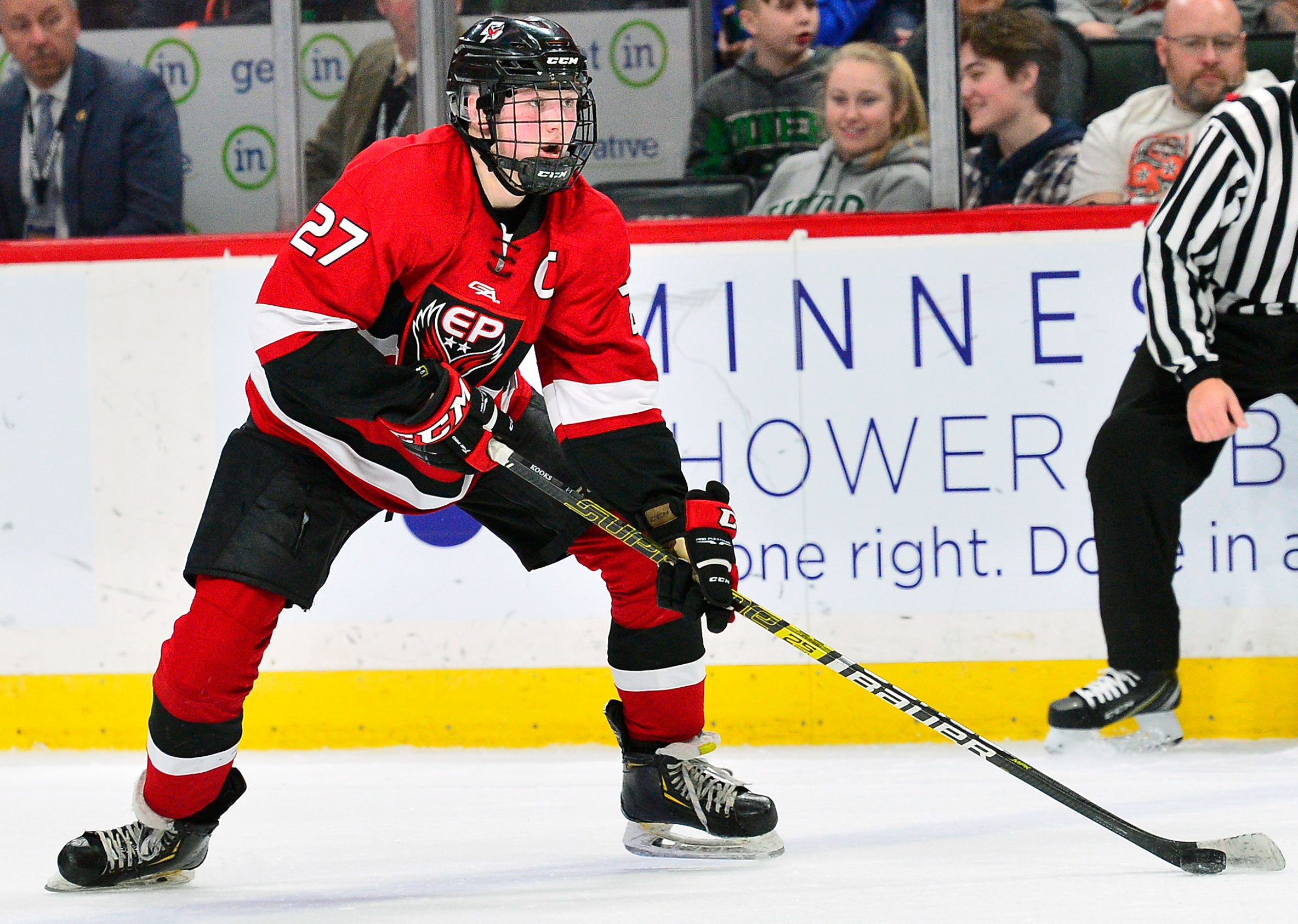 Just when you think Eden Prairie has exhausted it’s shrinking youth hockey resources, that its decade-plus run of producing NHL-caliber players can’t possibly continue, that its amazing streak of state tournament success has concluded, the Eagles go and play for another championship.

Picking the Eagles as a preseason favorite has become something of an uncontrollable reflex action, like what happens when doctors whack their rubber hammers on your knee. So here we go again, anointing Eden Prairie as the state’s No. 1 team in our too-early 2020-21 rankings despite the loss of its top two scorers and starting goaltender.

Yes, the departure of Mr. Hockey finalist Ben Steeves, a one-and-done transfer from New Hampshire by way of Michigan, will sting. Steeves, who committed to Minnesota Duluth while racking up 37 goals and 26 assists, brought a high-intensity package of blazing speed and precision marksmanship after arriving in Eden Prairie last summer (the New Hampshire native played Midget AAA hockey in Michigan the previous season).

Steeves and John Mittelstadt, a Minnesota commit, showed instant chemistry during their first scrimmage in July and were joined at the hip all season while paying on one of the state’s most productive forward lines. Mittelstadt finished with 20 goals and a team-best 38 assists.

The other big loss is goaltender Axel Rosenlund, a senior who always seemed to elevate his already steady game in the postseason. He posted a 2.07 goals against average and .921 save percentage while earning 17 victories.

The Eagles appear to have a plug-and-play replacement ready for Rosenlund in junior Eli Andrews. A youth hockey standout who was largely responsible for Eden Prairie stealing more than a few victories against top-ranked Bantam opponents, Andrews went 7-1-0 last season while sharing time with Rosenlund.

As for finding offensive production to offset the loss of Steeves and Mittelstadt, look no further than the trio of juniors Carter Batchelder and Drew Holt and sophomore Jackson Blake.

Batchelder, a Colorado College commit with exceptional speed and a deft scoring touch, is the top returning goal scorer with 17 despite missing five games midway through the season with a shoulder injury. Holt, whose 33 points is tops among returners, has been Batchelder’s primary wingman for seemingly forever, and he brings a wicked shot and soft touch around the net.

Blake, a North Dakota commit who is No. 1 in our rankings of the state's top sophomores, was ruled ineligible for varsity competition until late January by the Minnesota State High School League because of his short stint playing for Shattuck-St. Mary’s in Faribault the previous winter. The 134-pound jitterbug with incredible vision and playmaking ability, was plugged onto the top line with Steeves and Mittelstadt immediately upon joining the varsity and finished with seven goals and 12 assists in 13 games.

Finnish-born Riku Brown, a bruising 6-foot-1, 220-pound junior who is a lock for a first- or second-line role, adds a bit of grit and nastiness to a team that wasn’t particularly physical last season. Brown, who contributed 11 goals and nine assists, has considerable scoring chops, too.

Sophomores Tyler Johnson, Jake Luloff and Reagan Sheperd all were high-energy forwards who contributed to the mix mostly as third-liners and will likely see more prominent roles this season.

The Eagles return all three of their top defensemen in juniors Luke Mittelstadt, Mason Langenbrunner and Kam Langfels. The 5-11, 185-pound Mittelstadt, younger brother of John and current NHLer Casey (Buffalo Sabres), scored 32 points last season (including 15 on the power play) and ranks among the state’s top handful of defenders. A too-early Mr. Hockey candidate, he’s committed to play at Minnesota.

Langenbrunner is yet another Division I commit (Harvard) who has above-average size (6-2, 165 pounds) and offensive ability (5 goals, 16 assists). Langfels scored three goals and added 11 assists last season while often deployed in a shutdown role matching up against the opposition’s top forward lines. Juniors Will Britton and Jake Casey also saw significant action on defense.

Eden Prairie's youth program is dwarfed by most of its neighbors. The Eagles had just three Bantam-level teams last season compared to eight for Minnetonka, seven for Chaska/Chanhassen and five for Prior Lake — all section rivals.

So far, the Eagles have thrived on the quality, not quantity of its feeder system, and last season's Bantam AA team had enough talent to finish No. 13 in one season-ending set of state rankings and No. 19 in another.