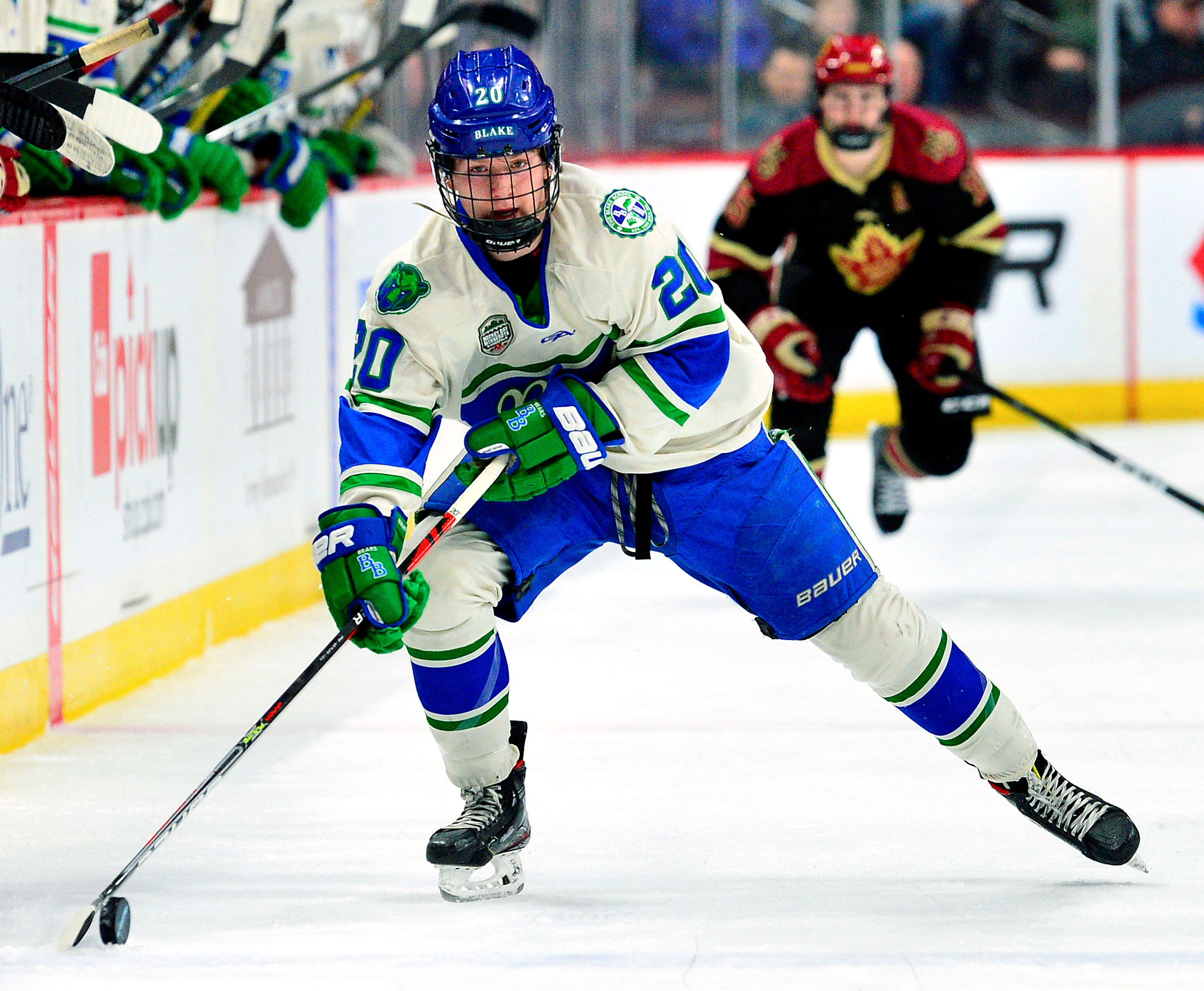 Joe Miller, an 80-point scorer as a junior, will be on the short list for Mr. Hockey candidates next season. Photo by Tim Kolehmainen, Breakdown Sports Media

It’s tempting to say the Bears made a “miracle” run to the state tournament semifinals last season, given their recent ascension from small- to big-school hockey, the unprecedented circumstances surrounding their walk-off section championship victory and the storybook pedigree of their first-year head coach.

But looking back to late fall, Blake’s success shouldn’t have come as much of a surprise. The Bears were expected to be exceedingly good. Top-four good, in some preseason rankings. And for sure state tournament good in many observers’ estimations.

Alas, many of the key cogs from last season’s groundbreaking team were seniors. The most famous of the nine-member group is Gavin Best, the forward who drew nationwide acclaim after scoring in overtime on a penalty shot to lift the Bears past Benilde-St. Margaret’s in the Section 6AA championship game. Best was more than a one-hit wonder, though, as the first-line forward scored 20 goals and added 35 assists. Joining him on the mostly unstoppable top unit was Jack Sabre, who scored 23 goals and added 32 assists.

Seniors dominated the defensive ranks, too. Miami of Ohio commit Ben Dexheimer (12 goals, 18 assists) and Will Svenddal (9 goals, 27 assists) formed one of the state’s best duos, and co-captain Lachen Reid (3 goals, 14 assists) was a study in steadiness.

Not all of Blake’s best players were seniors. A sizable reason for the Bears lofty too-early ranking is irrepressible forward Joe Miller. A junior committed to play at Minnesota, Miller amassed team-highs of 33 goals and 47 assists last season and is among the top two or three early favorites for the 2021 Mr. Hockey Award given to the best senior skater.

Several forwards will be jockeying for position to replace Sabre and Best as Miller’s wingmen. Sophomore William Matzke (15 goals, 12 assists) and juniors Connor Mahony (21 points) and Thomas Nelson (18 points) are early contenders for the coveted top-line status. Carter Krenke, a towering freshman who scored 12 points last season and is brimming with potential, should also slide up into a top-six role.

Sophomore Jake Svenddal (10 points), Will’s brother, and junior Ryan Resseman (8 points) are the returning defensemen and will have the luxury of playing in front of a veteran goaltender in junior Aksel Reid, a starter since he was in the eighth grade. Reid played the majority of minutes last season, and freshman Jonah Spaeth showed flashes of brilliance in the backup role.

Rob McClanahan, who starred on the U.S. 1980 gold medal-winning “Miracle” Olympic hockey team reluctantly signed on as Blake’s interim head coach late last fall. By the midpoint of the season he was enjoying himself so much he inquired, much to the delight of school administrators, about making the head coaching role permanent. The “miracle” man who seemingly pushed all the right buttons last season will be leading the Bears for the foreseeable future.