Luke Olson's eight goals in a Jan. 10 game is believed to be the second highest total ever 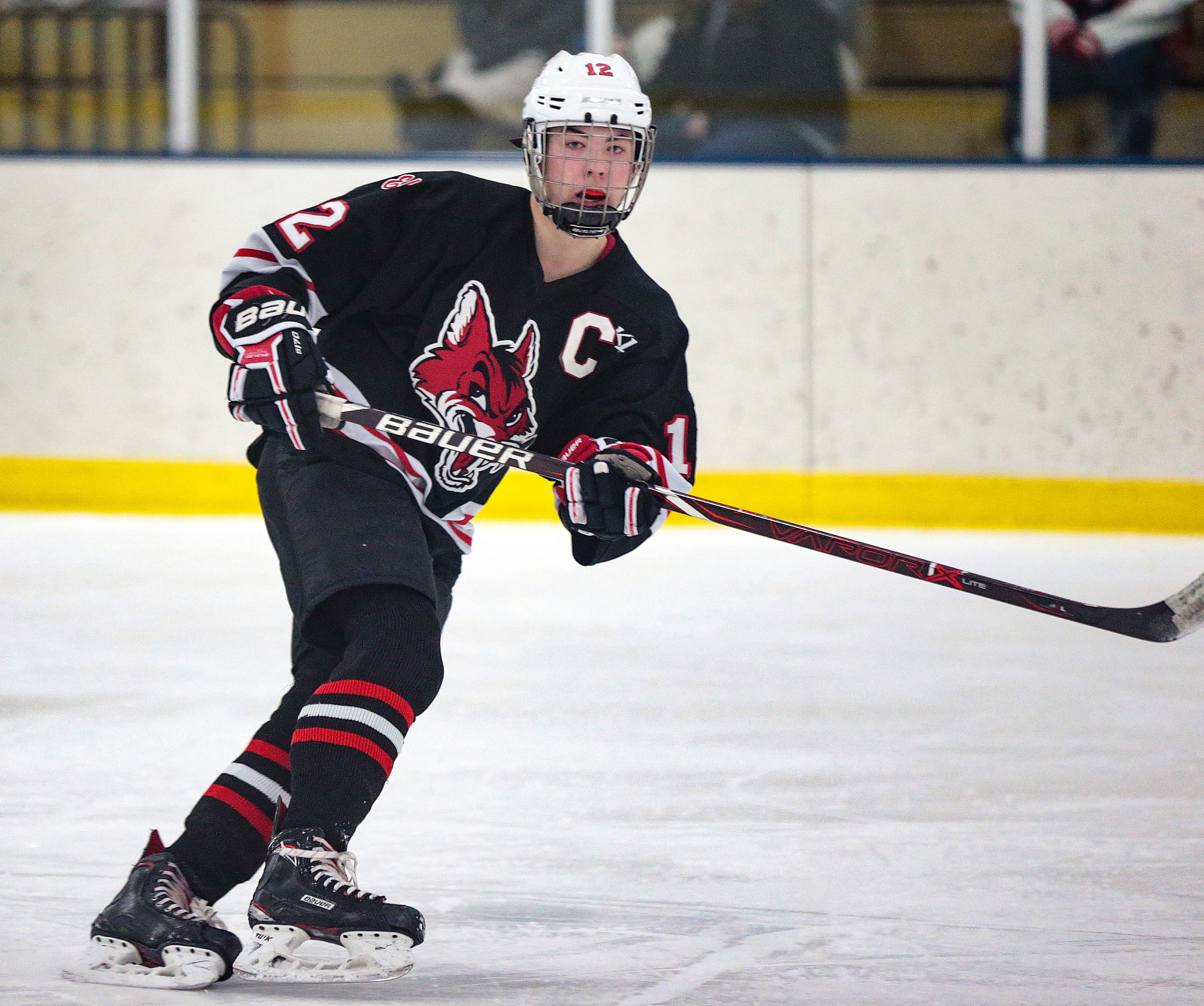 Seven of Luke Olson's eight goals in a Jan. 10 game against the WSFLG Blizzard were listed on the scoresheet as unassisted. Photo by Cheryl Myers

Ely’s Luke Olson had already scored seven goals. So why not, he thought to himself, make his run at an eighth one something special?

With time running out and on one last scoring rush, Olson slid his stick back between his legs as he wheeled through the crease and around the goaltender, cooly flipping the puck into an open net.

“Most of the time I was just looking for an open spot to shoot,” Olson, a senior center, said about his strategy on a handful of previous breakaway goals. “I mixed it up on that one.”

Olson’s eight goals in a 10-1 victory over an amalgamation of west-central Wisconsin schools known as the Blizzard on Jan. 10 in Siren, Wis., ties what is believed to be a modern-era record and the second most ever scored in a single game by a Minnesota high school player. Max Oshie of Warroad scored 12 goals against Thief River Falls on Jan. 6, 1948 and Josh Cisar of Moose Lake scored eight against North Branch on Jan. 28, 2012.

Before Olson’s scoring splurge, Cisar was the only other state high school player was known to have scored more than seven goals in a single game.

“It was one of those games where everything he shot went in,” Ely coach Ben Johnson said. “

“Eight goals in a high school game is kind of unheard of. I’ve never seen anything like it.”

Entering Ely’s game against the Blizzard, Olson had scored 12 goals to lead a Timerwolves team that was winless in eight outings. Olson provided a bit of foreshadowing of the the night to come when he notched a goal 1:38 into the first period, which ended with Ely leading 2-0. Olson scored four consecutive goals to end the second period as the Timberwolves extended their advantage to 7-0.

Johnson said he has just 12 players currently in the program, and cancelled a game against Greenway earlier this season because of a lack of healthy bodies. He limited Olson’s ice time in the third period in an attempt to both give his varsity newcomers (there are six eighth graders and one seventh grader listed on Ely’s roster — the Timberwolves don’t have a junior varsity) extended action.

Johnson also was trying to avoid running up the score, even though play had been fairly even in both ends, and the winless Blizzard actually had a 32-31 advantage in the final shot count.

Limited to just three third-period shifts, Olson scored during each of them. The highlight coming with his razzle-dazzle, between-the-legs goal with 30 seconds remaining.

“Obviously I wasn’t looking for him to get eight goals,” Johnson said. “But Luke is definitely driven. He’s got that competitive attitude where, even at 8-0, he always wants more.”

The extraordinary athletic feat wasn’t Olson’s first. Last year, in his first season on the Timberwolves track and field team after previously playing baseball in the spring, Olson won the state Class 1A title in the 800 meter run. He’s believed to be the first state track and field champion to come out of Ely, a northern Minnesota town of about 3,000 residents.

Olson’s state title helped him land a track and field scholarship at the University of South Dakota. On the ice, Olson’s superior stamina allows Johnson to play him for extended shifts. He sometimes “rests” between shifts at forward by moving back to defense, a throwback to a state high school hockey deployment strategy for teams’ top players in the 1940s and ’50s, when rosters were limited to 12 players.

“We only have 2 1/2 lines, so he is literally out there the whole game,” Johnson said. “At least, he’s out there as much as he can handle.”

Olson repeatedly used his blazing speed and deadly accurate shot to terrorize the Blizzard, stealing pucks in the Ely defensive zone then racing in alone on goaltender Cashton Kapp at the other end. All but one of Olson’s goals were listed on the scoresheet as unassisted. Olson also registered an assist on Seann Prigge’s first-period goal. His nine points is believed to be tied for the third most in a state high school game behind Oshie's 13 and Sam Huff of Maple Grove's 10 in 2017. Cisar also had 10 points as part of his eight-goal game in 2012.

Cheryl Myers, a professional photographer whose son, Jake, is an Ely assistant coach, attended the game and had a bird’s eye view of several of Olson’s goals as she shot photos of the action mostly through the glass at the WSFLG end of the rink.

“(Olson) was picking corners and edges, he was right on with most of his shots,” Myers said. “There were a couple where I don’t even know how they went in. If he had been a fraction of an inch off, they wouldn’t have gone in.”

The Minnesota State High School League website lists Oshie’s 12 goals as the most in a single game, followed by four players with seven each, including Eveleth’s John Mayasich in the 1951 state tournament. Michael Unzen of Moose Lake, Dan Billiar of Mankato East and Ben Hanowski of Little Falls also scored seven in a single game during the 2008-09 season.

The National Federation of State High school Association lists two Michigan players as sharing the national record for most goals in a a game with 10. Three more Michigan players are credited with score nine goals in a single game. Mayasich is the only Minnesota player on the list, which includes players with six-goal games. There have been at least two six-goal games in Minnesota high school hockey this season alone

World of Olson’s achievement spread fast. Ely was on its way home from the game when the team bus stopped in Hinckley for the players to eat. Olson was waiting in line to order at Taco Bell when he heard a conversation that caught his attention.

“There was a teenager and his dad behind me, and the kid was on his phone,” Olson said. “He said, ‘Hey dad, look at this, some kid from Ely scored eight goals in a game tonight.’ ”

Editor's note: The article has been updated to reflect an eight-goal game by Josh Cisar of Moose Lake in 2012. 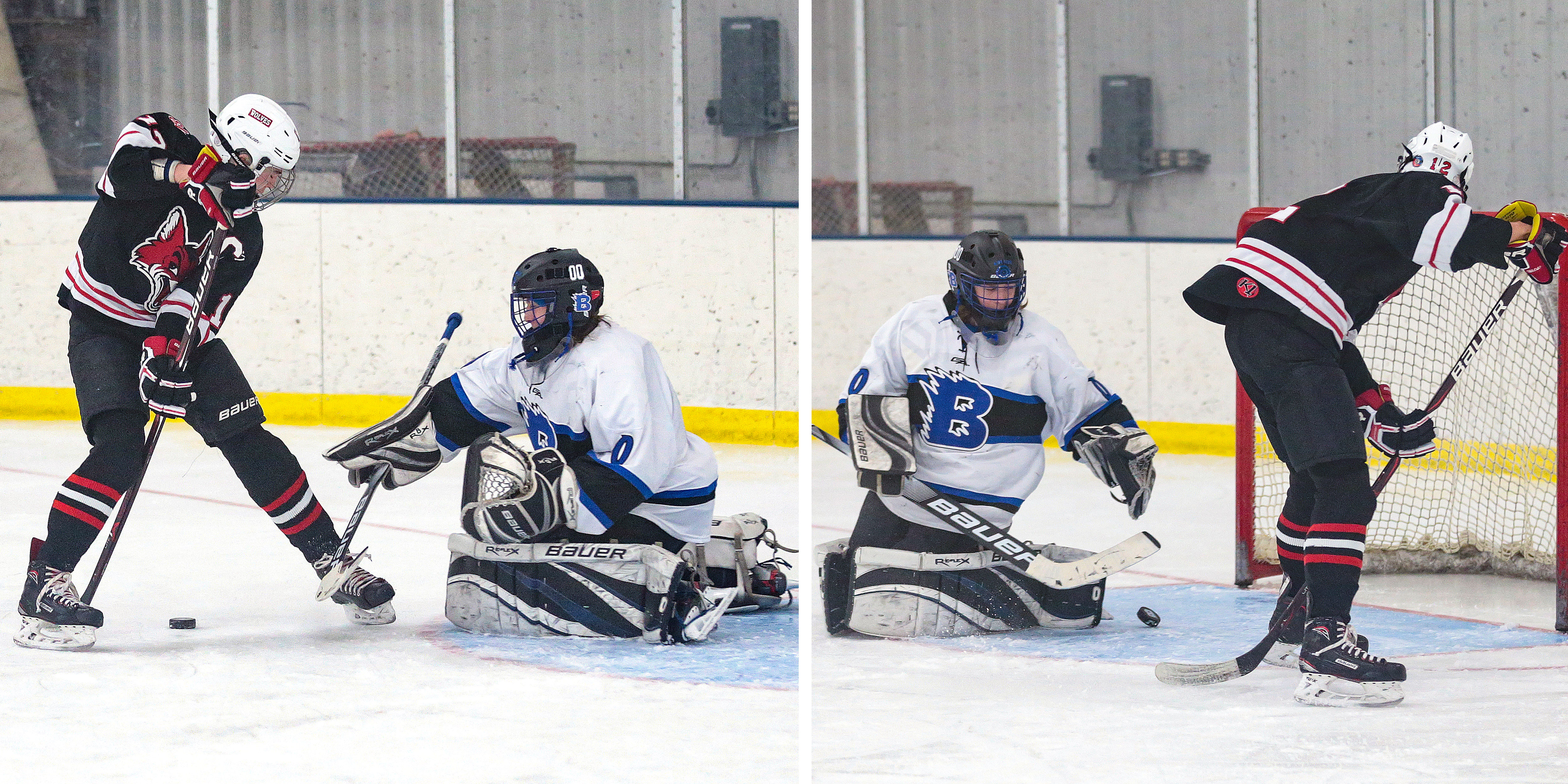 The grand finale of Ely senior Luke Olson's eight goals against the WSFLG Blizzard came with 30 second remaining on this slick move with his stick. Photos by Cheryl Myers 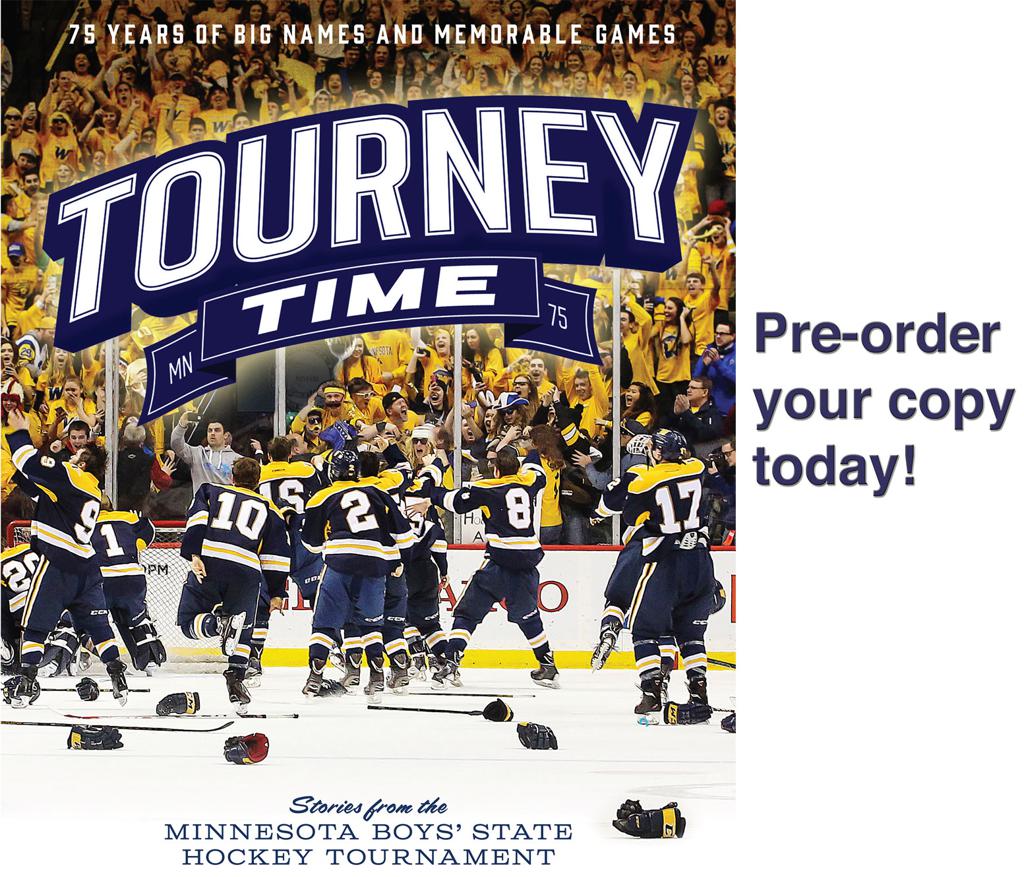