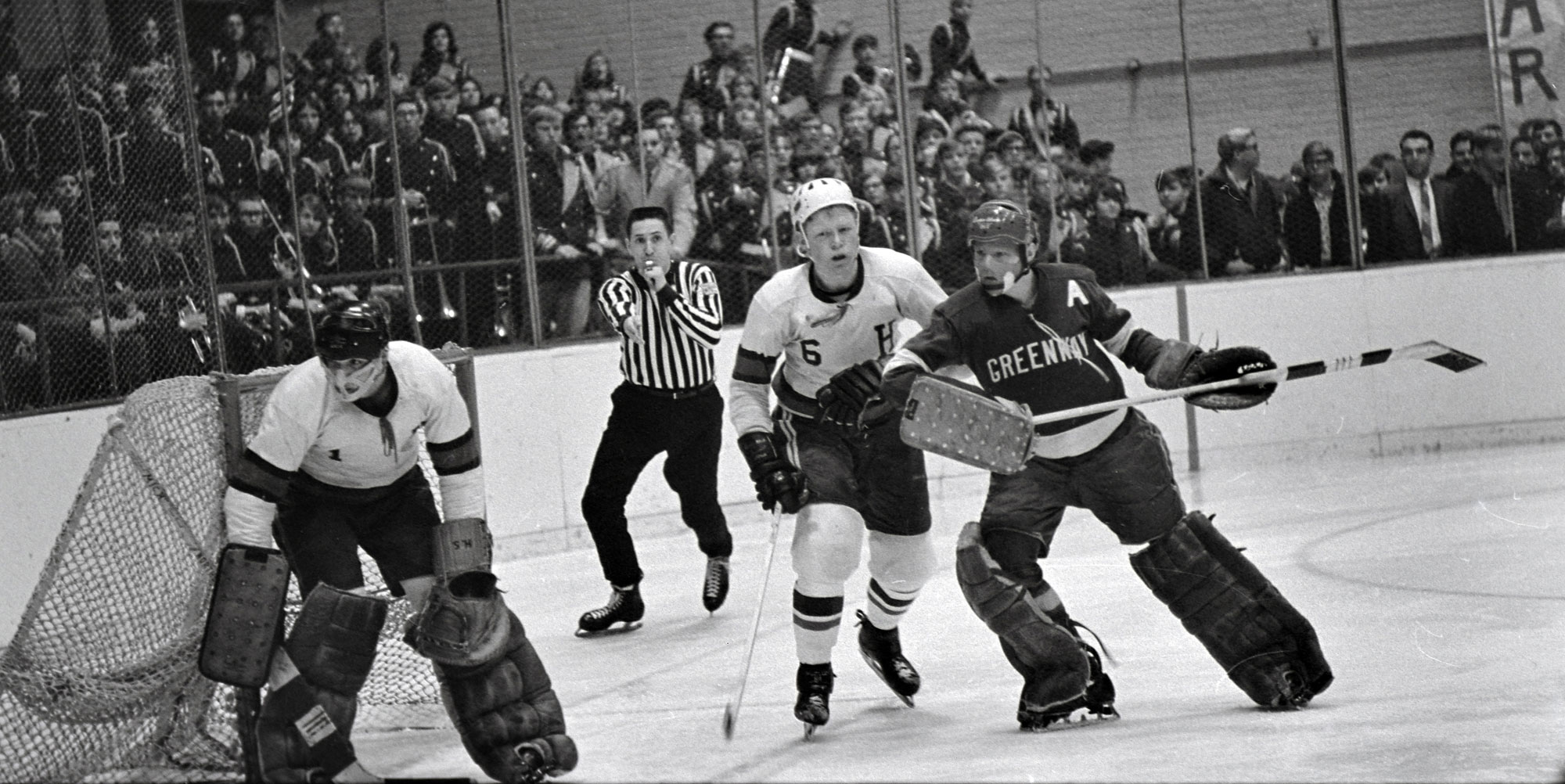 Goaltenders were allowed to cross center ice in the late 1960s, and Greenway’s Bill “Pie” Joy delighted in creating havoc in front of the opposing team’s net during delayed penalty calls, as he did here in front of goaltender Andy Micheletti and defenseman Ron Olson in a 1967 semifinal against Hibbing. Photo courtesy of the Minnesota Historical Society

Author's note: One in a series of state tournament related stories and excerpts from Tourney Time that we will be publishing throughout the 2020 state tourament. Read the book for more about Greenway's back-to-back championships in the late 1960s and Ron Beck's incredible run as International Falls' unbeatable goaltender.

The referee raised his arm to signal a penalty. This was Ron Beck’s starting bell.

Like a thoroughbred bursting from the starting gates, the International Falls goaltender raced full speed to the other end of the rink.

Because the penalty was being called on the opposing team, in this case South St. Paul, Beck knew there was no threat of being scored upon. By rule, the whistle would blow as soon as the Packers controlled the puck. Until then it was Beck’s job to position himself in front of the crease and block the vision of the opposing goaltender.

Beck was a senior during the 1965–66 season when International Falls coach Larry Ross implemented the highly unusual goalie-screening-goalie tactic.

“I don’t know where the idea came from,” Beck said. “I suppose they figured, ‘Beck is a pretty good skater, let’s send him down there.’”

“Down there” could be a dangerous place. Opposing players salivated at the chance to bump and jostle Beck. Against South St. Paul and defenseman Jim Carter, a future NFL linebacker who stood 6 foot 4 and weighed 210 pounds, the bumping and jostling was taken to the extreme.

Carter slammed into Beck, knocking him into the air.

“I’ll tell you, my feet were higher than my head,” Beck said. “I didn’t know exactly where I was when I got up.”

The Broncos didn’t have a proven backup goaltender. Losing Beck to injury would have been a disaster for a team in the midst of a fifty-nine-game winning streak and run of three straight state championships.

“I came to the bench, and Larry Ross said, ‘That’s the end of that,’” Beck said.

At about the same time Ross was decommissioning Beck as a front-of-net presence, Greenway coach Grant Standbrook stumbled upon the same idea. The Raiders were struggling with delayed penalties, failing to control the puck long enough for the goalie to come to the bench for an extra skater. Standbrook was practicing the goalie-skater exchange one day when he raised his arm to signal goaltender Rick Metzer to come to the bench.

Bob Tok was the player designated to go on the ice for Metzer. Problem was, Tok happened to be tightening his skates when Metzer arrived at the bench.

“He was frustrated by the fact that Bobby wasn’t ready,” Standbrook said about Metzer. “So he kept on going to the other end.”

The innovative Standbrook liked the look of Metzer screening the opposing goalie and assigned Metzer to that duty on occasion, just as Ross had briefly deployed Beck. When Bill “Pie” Joy took over as the Raiders’ goaltender in the 1965–66 season, Standbrook sent him to the other end on delayed penalties, too.

“He just said it makes sense, rather than me coming over to the box,” Joy said. “He said we could get down to the other end quicker if I just did it myself.”

Bob Gernander took over as Greenway’s coach entering the 1966–67 season. He continued to send Joy, then a senior, to the other end on delayed penalties.

“It was a big part of his game, and he loved it,” Gernander said about Joy. “And anything that would make the goaltender happy, I would let it go.”

Joy was racing end to end regularly during the 1967 state tournament. He tripped on his straps while joining the attack on a delayed penalty in the quarterfinals against Minneapolis Roosevelt. In the semifinals, against Hibbing, he was involved in a jousting match in front of the Bluejackets’ goal and was called for high-sticking.

He rushed the length of the ice to join the attack in Greenway’s 4–2 championship victory over St. Paul Johnson.

“I almost scored in the state tournament after the puck went off the opposing goalie,” Joy said. “It might have been against Hibbing. I whiffed on it. The puck was sitting right there.”

The way Gernander remembers it, the practice was outlawed the following season. Goaltenders no longer were allowed to participate in the play in any manner past the red line. The NHL implemented this rule (No. 27.7, a.k.a. “the Gary Smith Rule”) after the 1966–67 season when Smith, the former Toronto Maple Leafs goalie, was knocked out cold after carrying the puck beyond the red line.

“It was novel,” Joy said. “It was different. People still remember me as the goalie who would skate to the other end. I guess I was famous because of it.”